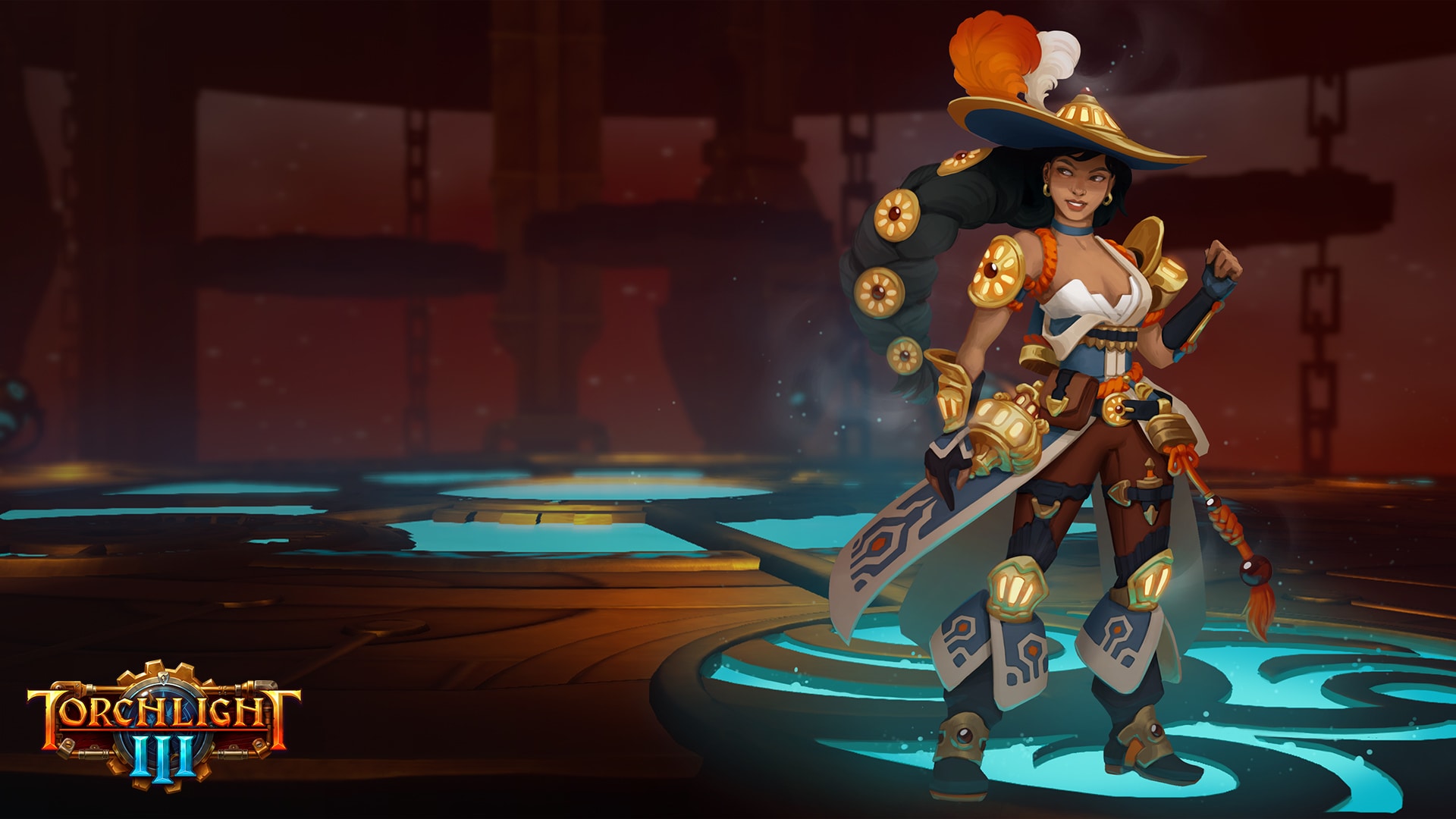 A letter from the Project Lead

In the last 3 months, Torchlight III has undergone some massive improvements.  We’ve changed from F2P to premium; removed horizontal progression; supported a new, better story; added new bosses; dramatically improved the character leveling, monster, and environment pacing; added the 3rd Act - Echonok; dressed up the new Sharpshooter class; and so much more.  We are so excited to share all of this with you.

This massive wave of changes represents both a ton of new content and several responses to the Alpha feedback.  Since the day we announced, we’ve heard concerns about F2P and horizontal progression.  Our shift to premium and a linear world structure brings us back to Torchlight’s roots.  The new story, lore objects, bosses, towns, and cinematics bring in the narrative and world building that we kept hearing was missing - from you and large parts of our team.  Personally, I’m most excited about the pacing changes to character levels, monster variety, monster spawning, and environment variety.  The grind is gone.  Everyone wanted another character class, and after over a year of work we’re excited to reveal the Sharpshooter - a powerful and nimble ranged character.

Finally, there are dozens of other changes that dramatically improve everything from Relic crafting to gold economy, from map UIs to party play, legendary items, and skill respec.  All of this iteration and improvement comes from listening to our fans, playing the game, and doing the hard work.  Thanks for your part in helping make it happen.

We still have a bunch of work to do over the coming months.  Placeholder content and content holes can still be found in the game.  We need to do that challenging “other 90% of the work” that comes after the first 90% of the game is done.  There is also a massive horde of bugs to exterminate.  Nonetheless, we are excited to share where we are - even if it is rough around the edges.

We’ve said that we hadn’t planned any character wipes, and that’s been true so far: we haven’t done any wipes in the Alpha since March, 2019.  However, with the change in business model and massive changes to the game, we have to change our approach to wipes.  Having a high quality game at launch is now more important to all of us than keeping our Alpha progress.  This makes us all sad, but maintaining our progress while making big game changes takes resources we can’t afford.  However, we also know that we need feedback across this large game, and it takes time to play to the end.  Shortly after Update 10, we are also going to be providing ways for Alpha testers to jump ahead to higher character levels and later frontiers.  We appreciate your patience with this and look forward to everyone’s help and feedback as we improve the game.

Our Alpha updates will be coming much more frequently from here on out.  So for those ready to continue the alpha adventures, hop back in and continue helping us make this a great game.  Thanks to everyone for joining us on this ride and let your friends know that Torchlight III  is coming in 2020!

The Frontiers have been rearranged sequentially with a new central questing storyline leading through the game start to finish, and almost all quests have been re-written around this story.  Each Frontier now has its own town (Act 2 & 3 towns are work-in-progress). Towns and Passages are now the only Public areas by default, and combat instances do not respawn monsters while players are present. Players can still join a party to bring friends along for their adventure anywhere in the game.

Player gear is no longer tied to the Frontier it dropped in. Characters have a single level, with XP and power curves adjusted globally to match the new game structure. Characters should reach levels 46-50 in the main storyline, and the max character level is 100. Area sizes, tiles, layouts, and monster populations have been refreshed to give a more dynamic experience from area to area within each Act. Players will now experience much stronger variety and themes in monsters they’re facing as they travel through each area.

Given the scope and nature of these changes, progression from earlier Alpha testing will not be retained - Alpha players will start with a fresh account in Update 10. After players have put the early Act content through some testing we will add “Skip Ahead” NPCs to the game so that Alpha testers can quickly get to all corners of the content and give feedback on it. We may wipe additional times during Alpha, and progression during the Alpha and other pre-launch testing stages will be wiped a final time before Launch.

Act 3 takes place in the mountains of Echonok and is now ready for testing! Continue your quest to put down the Netherim incursion while exploring the ancient halls of the Dwarven Architects. Step carefully as you navigate the craggy peaks where scheming Voltura have made their home, and be sure to grab plenty of new loot!

Nimble, cunning, and willing to bend the rules, the Sharpshooter uses incredible skill with ranged weapons and magical trinkets to take on enemies from afar. Most of the Sharpshooter class skills are available for testing now, with a couple more coming soon.

Destroy enemies from afar with shots from the Sharpshooter’s signature Bow abilities.

The Sharpshooter consumes ammo when using Precision skills. Ammo regenerates passively over time, or through mechanics like the Reload skill.

In addition to each skill’s combat effect, Adventurer skills apply a buff stack which grants added power to the next three Precision skills used. These effects are different depending on which Adventurer skill was last used.

The Bow is a 2-Handed Ranged weapon usable only by Sharpshooter characters.

Shocking Rounds: Conductor tree. Causes the Turret Car to conduct electrical energy into its bullets, increasing damage and arcing to nearby enemies. Activating the skill causes the arc damage to hit even more enemies at once.

Furnace Blast: Brawl Tree. Requires Heat to cast. While channeling this skill, Heat is continually drained to power a jet of flame shooting out of the Forged's chest cannon, damaging all enemies in a line and setting them on fire.

Shadowstep: Dark tree. Uses charges. The Dusk Mage teleports to a new location while releasing a blast of energy at the start location. Hitting enemies with the energy blast returns Mana.

Crush enemies beneath the frigid Glacier while your Ice Golem pounds them into rubble. Upgrades cause enemies who attack you to become Frozen, and drop a massive cascade of Ice Spikes during Relic activation.

Torchlight III is on Steam

Alpha participants who’ve previously gotten the game on an Arc account will have received an email containing a Steam key. Claim this key to add Torchlight III (Alpha) to your Steam Library. <Refer to this FAQ for additional details>.

Rahndo the Gambler has set up shop in Town. For a fee, he’ll provide a random item at the player’s current level. This is a convenient way to catch up a gear slot that has fallen behind in levels. Or burn through that extra gold rolling for a powerful drop!

Nameplates now appear for items on the ground when players hold the ALT key. Text color indicates rarity of the items. Players can click directly on the nameplate to pick up desired items.

While in a party, players now enter a downed state after losing all their health. Downed players can be revived by an ally who stands inside the revive ring displayed on the ground. After a period of time, players in the downed state will fully expire and must select one of the self-revive options. The max duration of your downed state is reduced each time an ally revives you, and restored to full after travelling or using a self-revive. Hardcore characters do not enter the downed state and cannot be revived.

All characters can equip the new Pistol (1 Handed) and Rifle (2 Handed) weapon types. The Sharpshooter can also use their class exclusive weapon, the Bow (2 Handed).

All legendary items have been completely overhauled with affixes that add or modify combat mechanics, and many new legendary items are now in the game. Some examples include:

Characters can now benefit from unique set bonuses by wearing multiple items from the same set. Some examples include:

This little bundle of joy is the winner of our first Community Design Challenge. Congratulations to Elve for this victory!

Players can now acquire Dye consumables and use them to customize each of their armor pieces. Dyes cannot be used on weapons. Dyes are currently available as Contract rewards, with additional drop sources coming in the future.

Characters can now earn a small number of Respectacle Points which allow them to refund a Skill Point in order to re-assign it. Respectacle Points are earned every ten levels starting at level 5, or by consuming a Respectacle item. Place the appropriate Class Skill Station in your fort to access use your available Respectacle points (currently any class can use any station. This will become class specific in a future update). Respectacles can also be spent to refund points spent in the Relic Skill tab.

Fame points now drop from any champion or boss kill, and whenever any quest is completed (except for Account quests). The weekly fame quest/ job board mechanic has been removed. Mapworks levels can now provide an area quest when the player enters the mapworks, providing a long term source of Fame. Not all mapworks areas have this quest content yet.

The number of levels in the one-time and repeating Contract sections is re-balanced and rewards have been condensed. Fort decor items in the one-time section are replaced with recipes for those items, allowing players to craft as much of that item as they desire after the recipe is unlocked. Additional reward types have been added: Dyes, Respectacles, and Enchanting recipes.

In addition to a wide variety of new monsters found in the Echonok Mountains, Goblin and Hyvid-Infested zones have been populated with new enemies.

This hulking treant will make the very ground beneath you a treacherous place to be.  Watch for its many patterns of vine-spikes, which adapt on the fly to your tactics.

A behemoth-sized, armor-plated insectoid.  This beastly bug is tough to bring down, akin to Stone Elementals or Netherim Brutes, and can dig a tunnel into the ground to reposition and protect itself.

This one, we’ll let you encounter for yourself.  The Netherim have arrived.

Shrines needed a power boost.  When found, Shrines should make you feel a significant gain in effectiveness and power.  In Update 10, Shrine durations are reduced to 20 seconds (down from 45), but each has a more potent effect:

Restores 33% of your maximum health per second, up from 20%.

Replaces the Shrine of Energy. Reduces all cooldowns by 50% while active instead of increasing resource regeneration.  This evenly affects all characters in an impactful way, rather than resource management which has different mechanics in each class.

Now raises your Critical Hit Chance to 100% for the duration rather than increasing raw damage.

Replaces the Fire Defense Shrine. Gives 100,000 Fire Defense and causes Fire Novas to pulse from you every second.