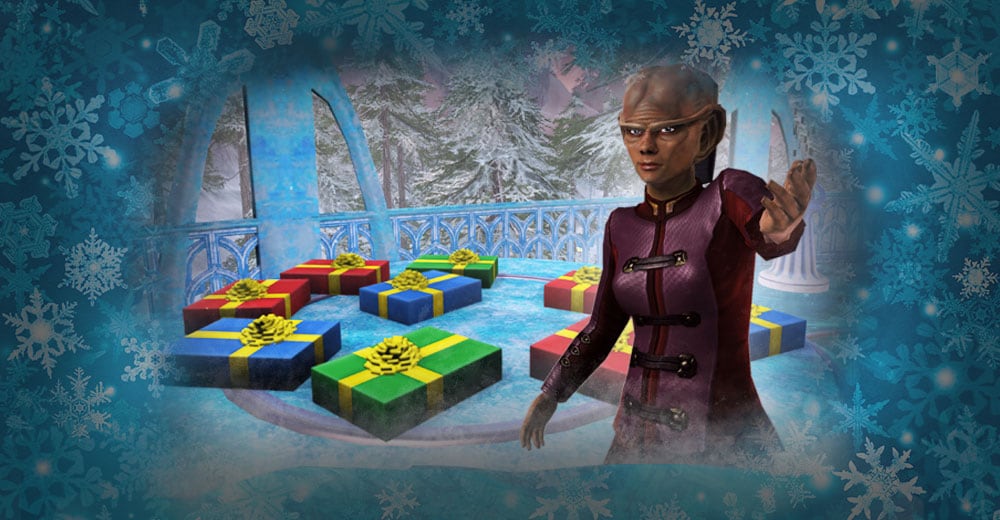 Rejoice, for Q has returned to share a little festive cheer with you. Allow me to invite you to my fantastic Winter Wonderland! I have a number of holiday games and activities for your entertainment, along with my impeccable company, of course. Want to know more? Of course you do – you’re one of the “go boldly” crowd, after all. So listen up!

Fifteen minutes after the hour, head to the snow valley and towers area to fight off waves of Snow-Borg in a little something I call “Tide of Ice”. Assimilated Snow-Borg will make their way down a frozen valley in an attempt to reach the Winter Wonderland. Along the way, they’ll break down walls of ice and fight against defensive towers blasting them with freezing flurries, but freezistance, as they say, is futile! It’s up to you to stop them with your snowball guns and frozen weapons.

That look on your face – you want more. Very well! At thirty minutes past the hour, and again at thirty-seven minutes past the hour, rush to the start of my competitive race - “The Fast and the Flurrious”! You and all of your friends (and enemies!) can race across the icy landscape to grab the flag at the end of the race in the hopes of being the fastest. Earn winter tags that you can use to acquire special snowy Epohh pets, or if you’re not one for raising a cute and cuddly companion, turn the Epohhs over for a variety of different Reputation Marks.

More, you say? Well. At forty-five minutes after the hour, you can participate in a snowball fight against evil snowmen all across the Wonderland! The snowmen will come alive and rush after anyone who passes by, pelting them with snowballs. Defeat enough of them and their wintry “Snowverlord” will appear on the frozen lake. Destroy him to collect extra rewards!

Yes, yes, there’s more! At the top of every hour, head to the Gingerbread Village area and help the gingerbread people fight off a vicious attack by jealous snowmen in the “Cones of Conduct” event. They’ve developed quite an ingenious defense system, making use of the most advanced snow-based technologies, which will create a giant Snow-Conian to help defend their village. They just need your help to supply all the shaved ice and flavored syrup needed to keep that giant dessert in the fight and defending their village. You will be rewarded based on how much of the village you prevent from being frozen by the snowmen.

If all that is not enough, queue up to jump inside my snow globe to defend the Gingerbread Village from an attack by snowmen - they really don’t like each other! Hunt down hidden presents and recipes there to make special holiday foods.

While you’re in my Winter Wonderland, you can take part in a race event known as “The Fastest Game on Ice.” Sounds thrilling, doesn’t it? If you win this race, you’ll earn Winter Prize Vouchers. You can turn in those charming items to earn a great new Tier 6 starship for all of that “boldly going” you mortals seem to enjoy so much!

That’s so much fun to have, even an omnipotent being such as myself could be overwhelmed! So get out there and have a good time in the snow while it lasts. After all, if you miss this holiday, you’ll have to wait a full year for the next one!