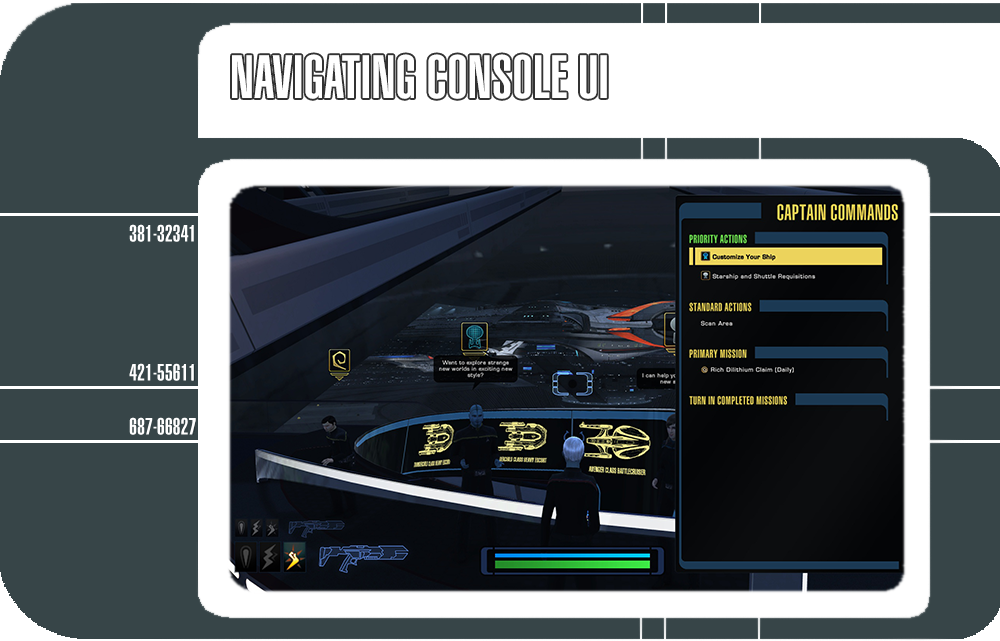 In order to bring Star Trek Online to console systems, we needed to create new UI paradigms to compensate for the limitations of controller navigation. Our goal was to retain the player’s ability to quickly access essential gameplay functions like environmental interacts, inventory, skill settings, and more. To achieve this, we had to re-think how the player access a variety of game menus and re-build the menu hierarchy to accommodate the controller interface. Three good examples of this process are the new Captain’s UI, the Queue UI and the Status Menu.

The Captain’s menu is a new context-sensitive menu access directly from the controller. This menu is aware of both the player’s environment and populates with options as they are appropriate. PC players are familiar with traditional “interact” buttons and even the “low-priority interacts” that appear in the lower right corner of the screen. For the Console UI, all of these interacts will now be accessed through the Captain’s menu.

This menu also shows you more information on your primary mission, allows you to check unread mail messages, and lists completed missions that are ready to be turned in. As important features and notifications are added to the console versions of the game, they will be added to the Captain’s UI for easy access to important information.

For some UIs, we’re not simply translating a similar layout to the console version but are instead taking an opportunity to improve their presentation and design to make them more useful to players. One of the most drastic changes will come to the Queue UI, which has undergone a significant redesign to make it easier to navigate and find the queue you want quickly.

This new Queue UI streamlines and filters the list of available queues in two important ways: firstly, it only shows queues of one difficulty at a time. This means there will no longer be two or three versions of the same queue to sort through in the list. Secondly, there are now tabs that sort queues into their various reputations. Since queues are the main way to interact with reputation rewards, this is an important quality of life improvement to make it easy to find the queues that are relevant to you. (Note that if a queue offers a choice of reputation marks for more than one reputation, it will display in the tabs of all relevant reputations.)

Finally, we put the mark icons for queue reward choices right in the list, so it’s clear what your reward options are when selecting a queue to play. This removes the “mystery meat” feeling that the current PC UI suffers from with its “choice of marks” icon.

Star Trek Online offers players a chance to captain their own starship, and with that responsibility comes many choices to make. These choices are made via interacting with a variety of menus and screens, such as the inventory, skill and specialization window, Bridge Officer status screen, and others.

In the PC version of the game, these menus are located in several places – many through separate buttons on the minimap. This is not a good solution for console, where players must navigate in cardinal directions via D-pad.

Our solution was to create a new “Status Menu” that appears with a single button press. From this menu, players have easy access to inventory, crew management, social windows and game options. It can be access at any time during play, and allows navigation through a variety of unrelated tasks quickly and easily.

We’re very excited about how players’ ships and captains will play on console, and while we think the moment to moment gameplay is great, we’re also excited to see how players react to the new experience between missions using a totally user interface that has been optimized for them, yet still delivers the deep set of controls and options players have mastered in the PC version of Star Trek Online. Not only is this new UI tailor made for the console, it feels more Star Trek than ever!