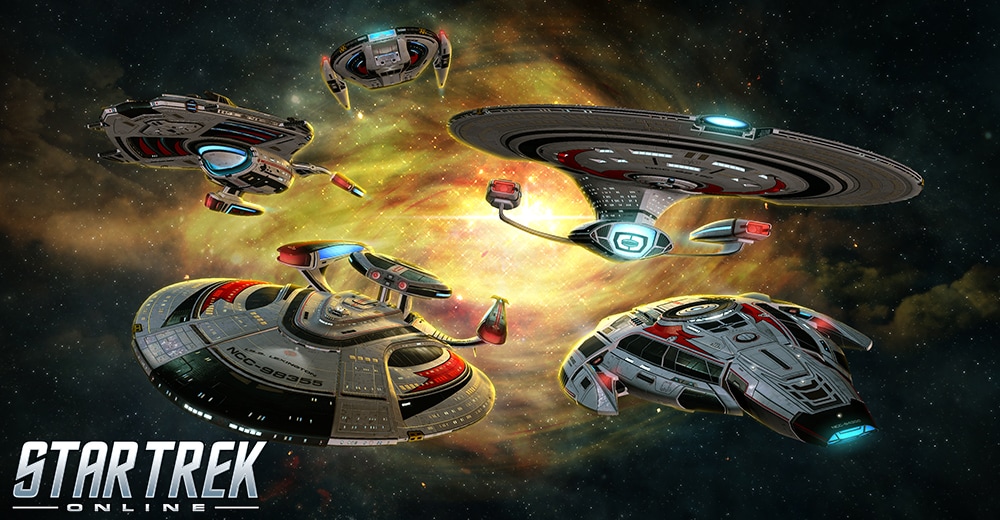 Whether ruthlessly administrating their quadrant-spanning Empire, or menacing their peace-loving counterparts in our dimension, the denizens of the Mirror Universe’s Terran Empire have never lacked in their penchant for causing strife and turmoil. In the modern era, their surprising advances in starship engineering and weaponry have been cause for concern and vigilance here in the “prime” universe, and none can deny the effectiveness of their armadas.

With the release of the 12th Anniversary Terran Bundle, now captains of all factions will have a chance to get in the captain’s chair aboard some of the Terran Empire’s most impressive modern vessels. These entirely-new variants of some of your favorite vessels from the Prime Universe come with new stats and seating, an impressive arsenal of consoles and traits, and updated visuals to fulfill your ship customization needs.

Yes, even in the Mirror Universe, we know one of the great joys in Star Trek Online is customizing your starship to perfectly fit the ambitions of your captain. In the new bundle, we are offering several new skins with each Terran ship that cover both canon and STO-original designs, allowing new ship variants for anyone flying these vessels, and for variants from their existing lineages. Details will be included in the descriptions of each of the new starships.

This value-packed bundle will go on sale for PC players beginning February 17th, 2022 (and on Console platforms beginning within the following month) and includes all of the following:

As an alternative to the great deal that this Bundle offers, the four new Terran starships will also be made available as separate purchases on the Z-Store, at the standard price of a Tier 6 Starship: 3,000 Zen each. These starships will participate in a Z-Store-Wide Ship Sale which will be active from February 17th, 2022 until February 22nd, 2022, reducing this price to 2,400 Zen each (20% Off!). **

(** Discount Dates for Console’s release will be announced at a later date.) 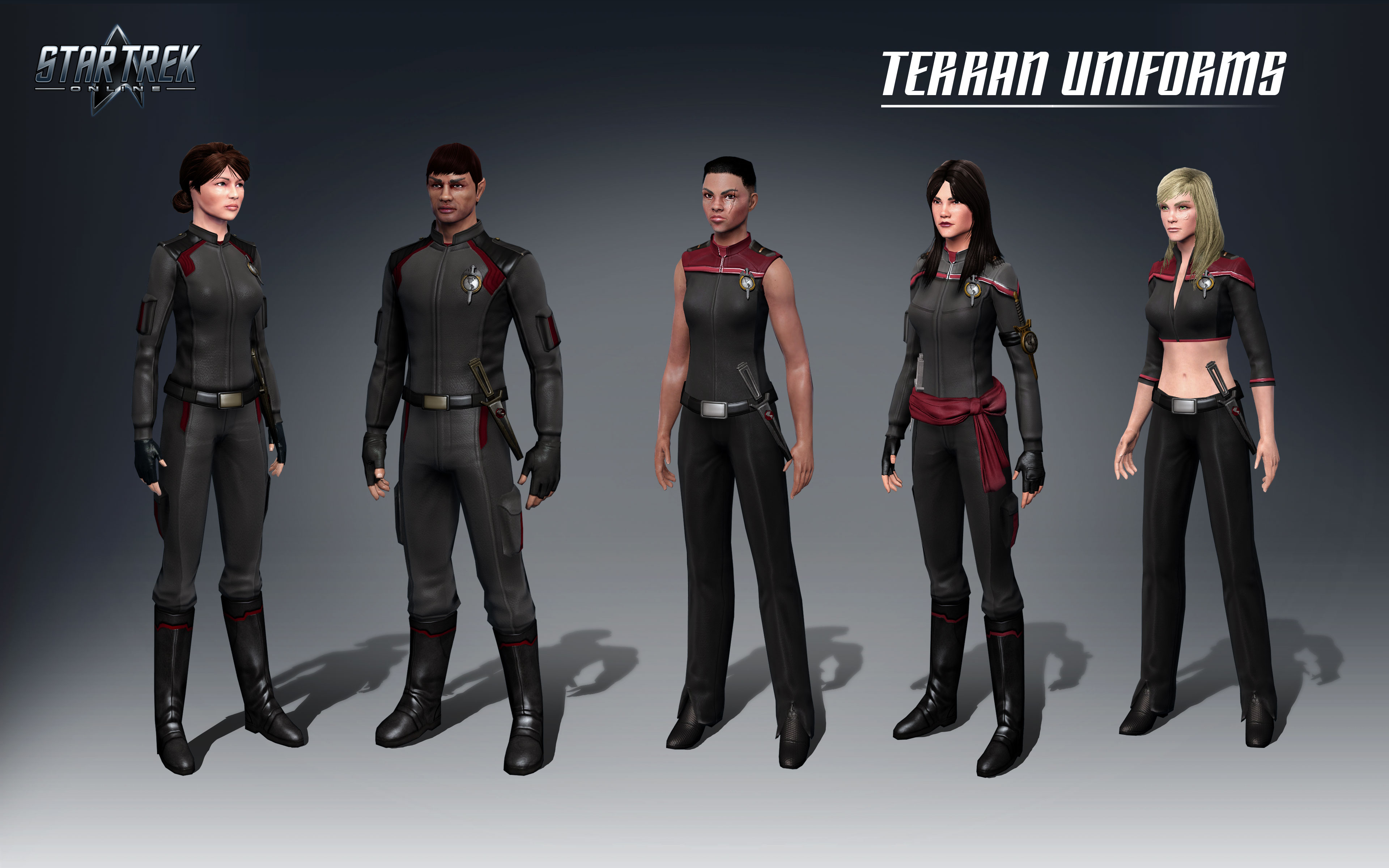 As seen worn by players’ mirror counterpart - the Inquisitor - in the episode “Red Shift.” Mix and match your most devilish look from among these Terran uniform pieces, available for use by captains of all species, and all factions!

An exclusive set of additional Terran Odyssey uniform pieces are also included for your use in this Bundle. These variant uniforms are only usable by Federation species. 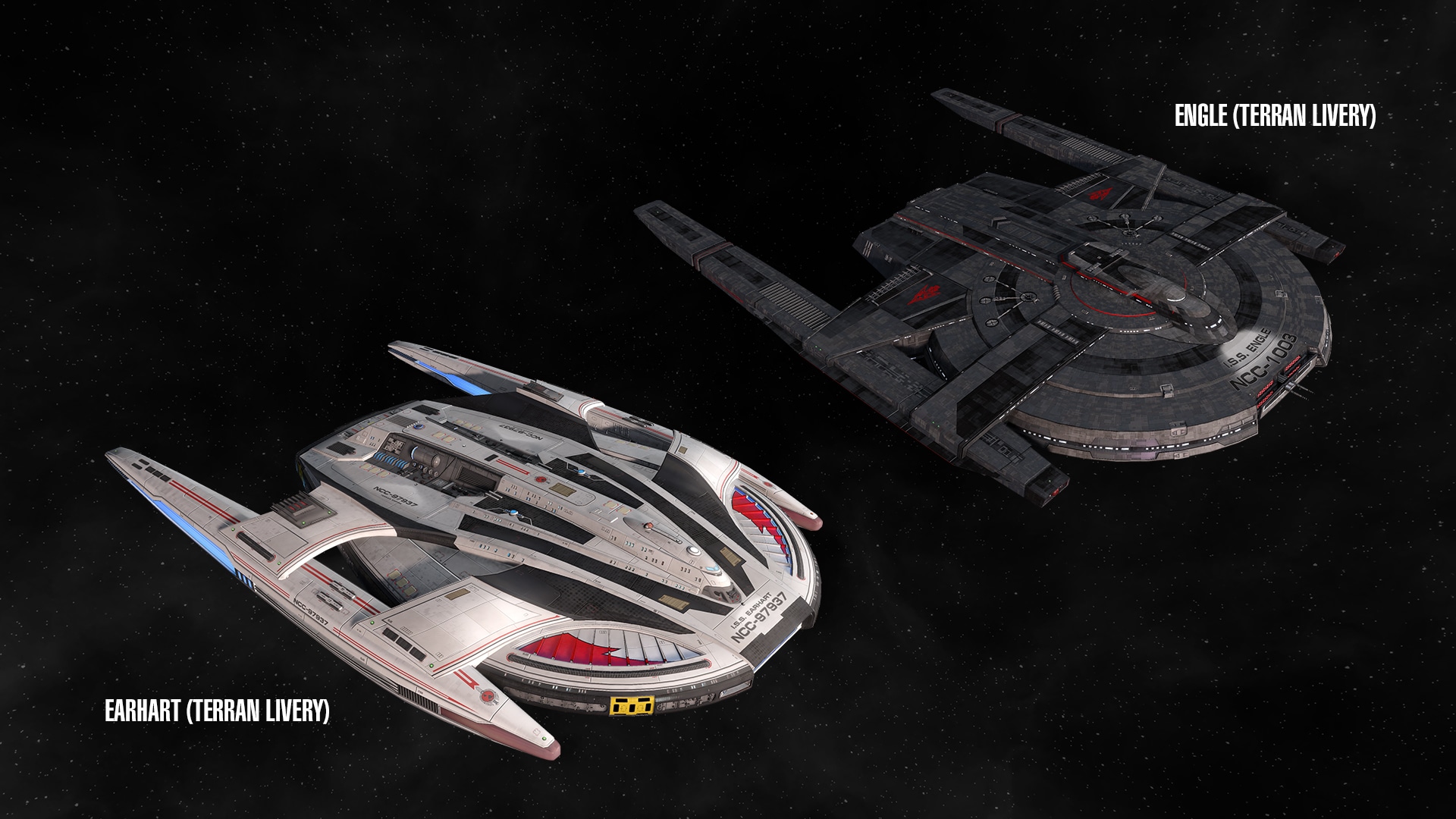 For details on this starship, please see its previous announcement blog:

(Note: This ship is only claimable by Federation captains, or those who have obtained the Cross-Faction Starship unlock.)

The bundle also includes a bonus skin for the Engle exclusive to the bundle: a Terran version of the 25th Century Earhart Heavy Strike-Wing Escort. 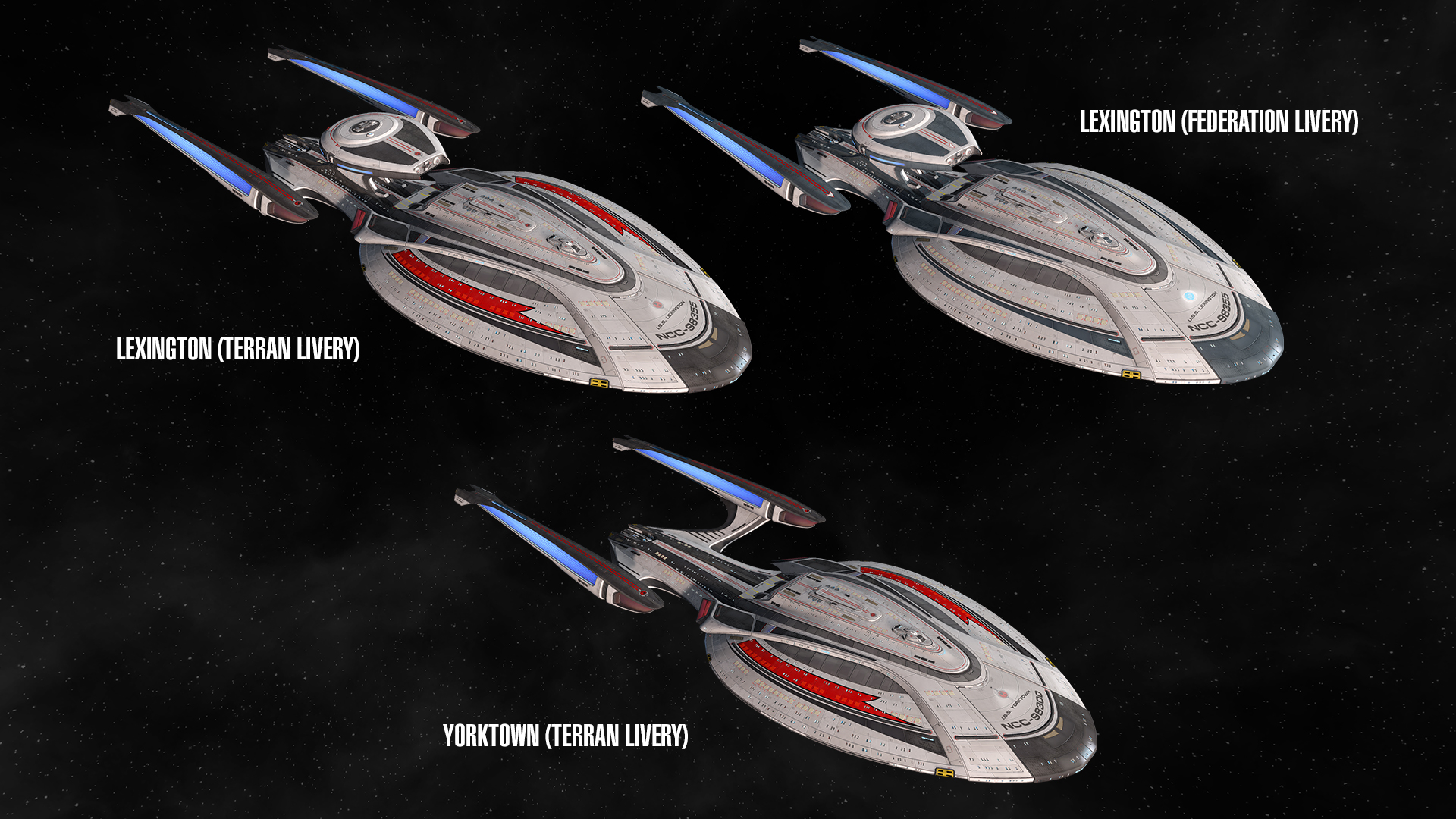 The complete technical capabilities of this modern flagship of the Terran Empire are a well-guarded secret, known only to a select few within the Emperor's trust. Yet despite the closed lips, it is no secret that the ship is versatile and unpredictable, often emerging victorious and relatively unscathed from battle, even when the odds are stacked in her enemies' favor.

The Lexington-Class Dreadnought Cruiser is a menacing dreadnought refit of the Yorktown-class Star Cruiser. With a massive heavy weapons pod and an agony phaser lance, the Lexington makes a formidable flagship to any fleet. It unlocks the following visual variants:

Built into the entire structure, or "spine", of the hull, this weapon cannot be removed. The weapon fires a single massive phaser beam that is so devastating, that it typically pierces multiple targets - if they happen to be lined up.

The tradeoff between ease of reloading and number of weapon cells is usually a balancing act. Every now and again, a design comes along that throws that idea out entirely, and this is just such a time. Bristling all over with disposable torpedo launchers, this console equips the ship with the absolute most semi-guided torpedoes possible. These have significant tradeoffs -- guidance isn't available except during the primary launching sequence, reloading is slow and cumbersome, and the torpedoes can't be discharged individually. These tradeoffs buy a spectacular and morale-debilitating wave of devastation that threatens tremendous hull damage to huge numbers of enemy ships, even those far outside the primary field of fire. A valuable asset to captains willing to take risks in the fray.

This console additionally provides a passive bonus to Projectile Damage and Maximum Hull Capacity. This console may be equipped on any ship in any console slot.

While this trait is slotted, activating Directed Energy Modulation, or any Miracle Worker Bridge Officer Ability, will grant you an amount of Bonus Weapon Damage that scales with the number of nearby foes within 5km (up to 10 max). This buff lasts 10 seconds, and may only trigger once every 10 seconds.

These scrappy fighters are equipped with Agony Phaser beam weaponry, and can utilize Beam Overload. At higher ranks (available on the Dilithium Store or Fleet Starbases) they also gain access to Tractor Beams. 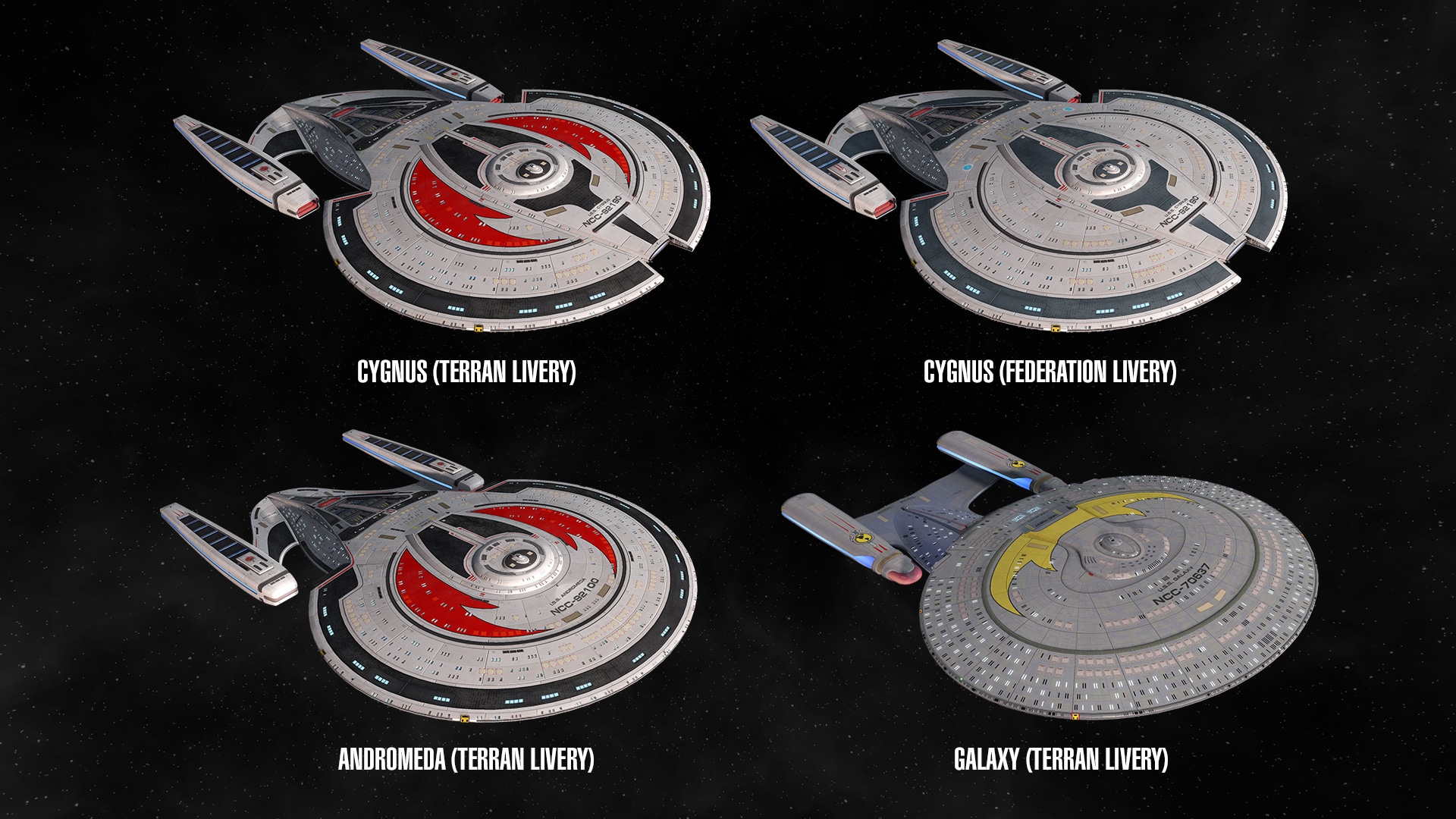 Although considered by some to be too ponderous to serve as a frontline battleship, the Terrans still find value in the immense and menacing posture of this bulky and well-armored cruiser. Its presence on any battlefield is widely understood to be an unspoken threat to enemies of the Empire, as it is outfitted not only to defeat their enemies, but to erase them from history entirely.

The Cygnus-class Battlecruiser is a new version of the Andromeda-class Exploration Cruiser, built with advanced tactical systems. The Cygnus unlocks the following visual variants:

Activating this Console projects a dimensional rift directly forward for 8 km, which expands after reaching that distance (or after reaching an obstacle). Foes near the rift take Phaser Damage and are Banished to the Terran universe for several seconds. Foes hit by the projectile before it expands take extra damage and are banished for longer.

The Terran Empire has spent a great deal of resources learning how to travel to our universe, and they have a great deal of experience weaponizing their technology. It was only a matter of time before they combined the two.

This console additionally provides a passive bonus to Exotic Particle Generators and Phaser Damage. This console may be equipped on any ship in any console slot.

(Banished foes cannot be seen or targeted, and cannot move or act.)

While this trait is slotted, activating a Universal Console or Temporal Operative Bridge Officer Ability grants a bonus to your Control Expertise skill based on your current amount of Exotic Particle Generators skill. Subsequent activations will refresh this buff’s duration. 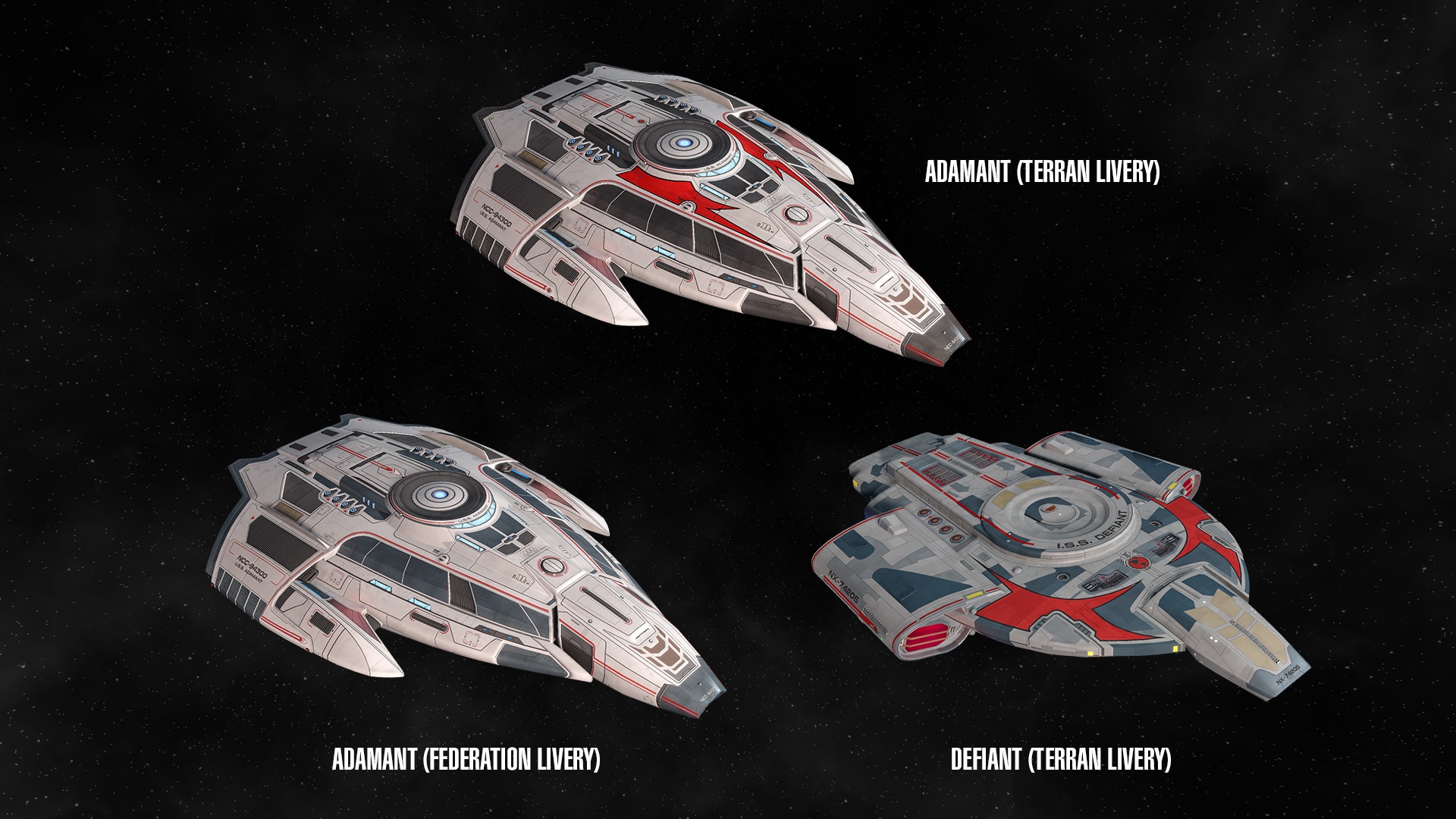 Sleek, aggressive, and armed to the teeth, this light and maneuverable craft represents the pinnacle of modern Terran engineering. It's streamlined and lightweight design is a stark departure in ship construction philosophy from the Terran propensity toward enormous citadels and imposing cruisers, yet this menacing vessel has proven itself a capable strike craft that anyone would be foolish to underestimate based solely on its size.

The Adamant-class Heavy Raider is a new 25th-century iteration on the Defiant family. The Adamant unlocks the following visual variants:

The Terran equivalent to the Quad Phaser Cannons found equipped on the prime universe’s Defiant class starships. These powerful weapons are built with the unique quality of occasionally dealing additional damage-over-time to foes, rather than being able to knock subsystems offline. They still draw additional Engine Power when firing, just like their counterparts.

The specialized warhead launchers have a narrow firing arc, but fire multiple times at your chosen foe, dealing repeated kinetic damage. A portion of this damage bypasses shields, and critical hits with this weapon will hit harder by default than that of other weaponry.

Agony technology has come a long way since only being usable in stationary modules, on a personal scale. This application of the technology will send rippling streams of agonizing energy through the crews of multiple ships at once, while simultaneously tearing into their hull, based on the energy it can redirect from that damage that is dealt to a single chosen starship. Thus, the Agony Redistributor acts as a force multiplier in the truest interpretation of the phrase.

This console additionally provides a passive bonus to Flight Speed and Inertia Rating. This console may be equipped on any ship in any console slot.

Activating Evasive Maneuvers, or any Intel Bridge Officer Ability, will call in a Wild Weasel Shuttle to distract nearby enemies.

Up to 20 nearby targetable torpedoes and/or mines will be drawn toward the mobile decoy, as well as the 5 nearest enemy vessels being Taunted into attacking it. The Wild Weasel is extremely sturdy for a fighter craft, but will eventually be destroyed by the punishment it calls down upon itself.

This pet may only be created once every 45 seconds. 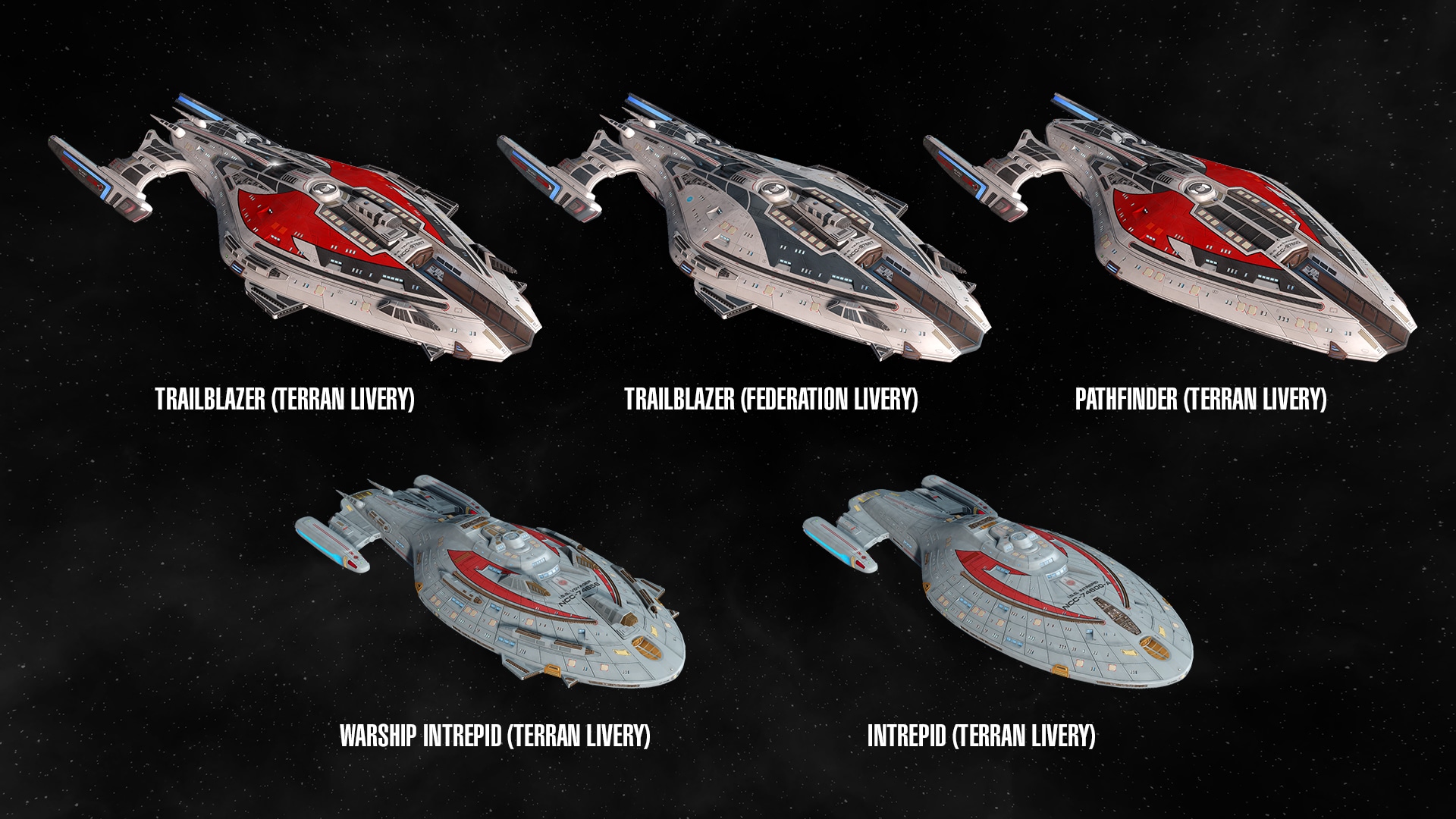 Even in the fleets of a conquering, expansion-minded Empire, there is still a need for exotic research, and scientific discovery. This vessel has married these needs with aggressive armaments and experimental subsystems to create a synergy of destructive forces in the shape of a starship. No unknown is too dangerous for the captains of these versatile and hardy vessels.

The Trailblazer takes the elegant stylings of the Pathfinder Long-Range science vessel and does what the Terrans do best: straps a bunch of guns to it. The Trailblazer unlocks the following visual variants:

Built into the entire structure, or "spine", of the hull, this weapon cannot be removed. The weapon fires a single massive phaser beam that is so devastating, that it typically pierces multiple targets - if they happen to be lined up.

The tactic of erecting an externally-located hardened field of impenetrable energy was first employed by the I.S.S. Reskava, under the leadership of Captain Kuumaarke of the Terran Empire. This miniaturized drone version of the emitter used by the Shield Ship in that encounter lasts for a much smaller duration, but can also be employed far more rapidly in the field. Once deployed, the Rampart Deflection Drone will render your starship completely immune to incoming damage for a brief period. The drone itself is still susceptible to damage however, and may be destroyed by savvy enemies.

This console additionally provides a passive bonus to Shield Capacity and Critical Severity (the latter scales based on your current Starship Exotic Particle Generators skill). This console may be equipped on any ship in any console slot.

(** Note: Immunity effects such as this one are subject to a shared lockout period.)

While this trait is slotted, the starship enjoys a bonus to Exotic Particle Generators while under the effects of Cannon Scatter Volley, Cannon Rapid Fire, Beam Fire at Will, Beam Overload, Torpedo Spread, High Yield Torpedo, Dispersal Pattern Alpha, or Dispersal Pattern Beta.