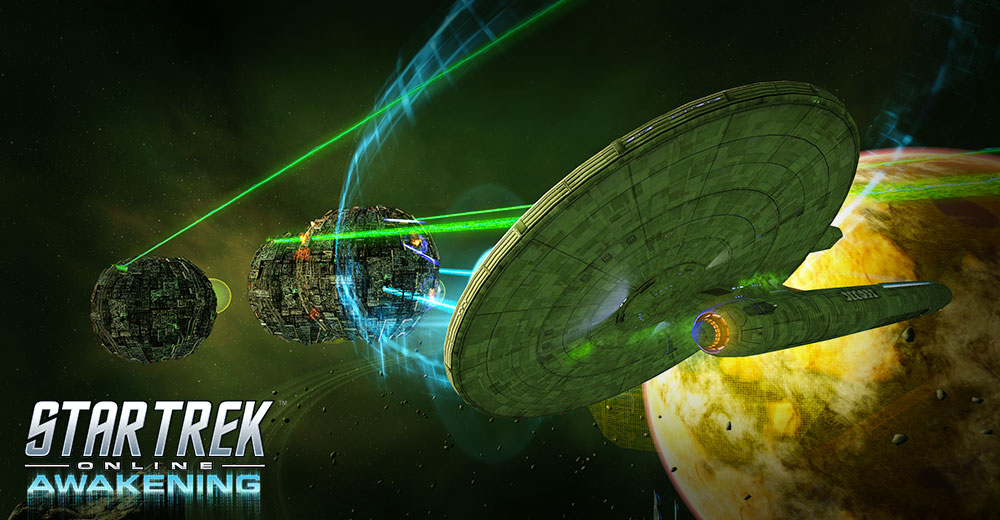 Priority alert to all captains from Admiral D’vak of Task Force Omega.

The Borg have returned.

The Borg Resurgence Event presents remastered versions of three of the most popular Borg Task Force Operations and pits you against the implacable advance of The Borg. This new Event is designed to celebrate these long standing operations, and gives players a new method of engaging with the classic nemesis in all their resurgent terror.

Participating in this Event will give all players the opportunity to win a set of Cyclical Modulation Ground Weaponry (Pistol, Rifle, Assault) for their entire account! Keep reading for details on these items, how you can participate in the Event, and what additional prizes may be earned.

The Borg are Adapting

What do we mean by remastered? Well, like the Borg, our game is also adapting. We selected these three TFOs to update and remaster because of their popularity among the player base and the quality of their content. They represented designs that worked well; they’re elite tactical drones, if you will. We made them more robust, updated them, added voiceovers, and improved on their presentation and mechanics to provide an even better player experience.

To alleviate any fears, these TFOs did not get harder, or have copious extra hoops added to them that we expect players to jump through. Instead we shaved off the rough bits, streamlined messaging, and tweaked fail conditions to be communicated better and have margins of failure rather than binary conditions that suddenly happen and cause you to fail silently. Infected will still be the viable DPS check; you’ll just get wonderful new voiceover to talk to you while you dismantle Borg Cubes like bricks of ramen.

The stakes are the same, the rewards for strong play are still there, but now it is a much more user-friendly experience and that means more drones for The Collective! Er, more players to play with and enjoy this content together!

The TFOs match level, ensuring that they are balanced regardless of player level. The messaging is streamlined - lessening confusion, which was a barrier to entry for some (we remind players to bring Frequency Remodulators for ground TFOs against The Borg, for instance), and we update players on events as they unfold much more clearly. All of these improvements improve the experience to make the content as welcoming as possible to new drones, er, players.

For you veterans – Advanced versions of these TFOs are also available to really test your crew, or deliver them screaming into the comforting nanite embrace of The Collective. And for the first time since the introduction of a 3-tier difficulty system for TFOs, we are pleased to announce that the Borg Resurgence Event will also introduce Elite versions of these re-mastered experiences, intended for the truly brave (or foolish) among you.

Your Journey, Toward Perfection

Players will be able to complete their Daily Progress once every 20 hours. Any of the above TFOs may be played as much as you like each day, so pick and choose how you prefer to gain Progress each day, and mix it up as much (or as little) as you like!

This multiple-event-spanning progression track will continue with the Borg Resurgence Event. This will be the final event that will participate in this Campaign, marking your last chance at receiving its reward. Each day that your Daily Requirement is met, the standard daily allotment of 50 Event Campaign Progress will be applied to your progress toward the completion of the Event Campaign’s Grand Prize.

Accruing a total of 14 Days’ worth of Daily Progress will allow you to claim the Grand Prize of the Borg Resurgence Event. This reward includes all of the following:

Once earned, every character on your account will be able to claim this set of ground weapons for themselves, including a Pistol, Rifle, and an Assault variant. Complete details on these weapons’ capabilities is included later in this blog.

Completion of this Event will grant you a weapon pack containing three different variants (Compression Pistol, Sniper Rifle, Blast Assault) of a new type of ground weaponry, inspired primarily by past conflicts with the Borg. These weapons have standardized primary and secondary firing modes, while their unique aspect lies in the tertiary firing mode. Typically reserved for a melee strike, these weapons instead utilize a “Cyclic Modulation” ability in this slot.
Activating Cyclic Modulation causes the weapon to change what energy type it is firing. This cycle proceeds along the following cycle:
Phaser -> Disruptor -> Plasma -> Tetryon -> Polaron -> Antiproton -> Phaser (etc.)
Additionally, each time these weapons have their energy type cycled, they will also gain multiple charges of a special penetration buff that can bypass a portion of enemies’ shields and damage resistances. Keep cycling in order to repeatedly benefit from this potent boost.
Cyclical Modulation Weaponry also have brand new weapon appearances never previously available.

This bonus reward will begin at 2,500 Dilithium Ore for the first day’s completion, then scales up with each subsequent bonus completion that you achieve. The more you play, the more you continue to earn!

For players interested in instantly completing the Borg Resurgence Event – whether that is due to worries over finding the play time to complete it, or simply wanting to move immediately into earning Bonus Rewards – we will be offering an updated method for buying out.

Within the new Event UI, an option will be presented that allows you to purchase the remaining progress that you need, for a scaling amount of Zen. The base price for this service will be 2,000 Zen, but every single Daily Progress that you earn will reduce that price on a percentage basis. Thus, if you have already earned 7 Daily Progress (half of the 14 required), this price will be reduced for you down to 1,000 Zen. The more you play, the cheaper the Buyout Option becomes, dynamically!

Once the Borg Resurgence Event has ended, your opportunity to earn Progress Points will have passed. However, the new Event System will store the progress that you made long after the Event has expired. Based on this stored progress, the option to Buyout the rewards will remain available through a new “Second Chance” interface. The price for this buyout is the same as what is offered while the Event is active, and scales in the same manner based on your amount of Progress Points accrued.

Veteran players that have participated in previous Featured TFOs may still be in possession of multiple “Featured TFO Commendation” items, which are no longer used in the new Event System. In an effort to maintain the value and investment attached to these legacy items, we will be taking the following actions:

Each upcoming eligible event (typically only Featured TFO Events) will have an option to Apply Legacy Progress to the requirements present, allowing you to ‘cash in’ your already-earned (and/or already-purchased) progress, toward these new Events as they become active.