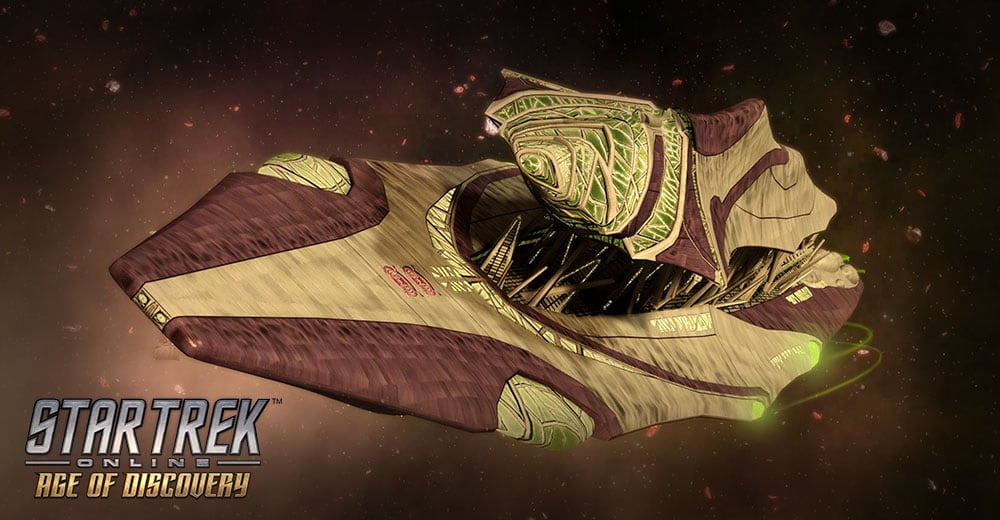 The re-emergence of the Hur’q and their astounding biological capabilities has prompted Alliance scientists and engineers to research the nature of this new species. In studying the Hur’q, much progress has been made in developing equipment that is able to replicate the Hurq’s unique harmonic abilities. As new developments and advancements are discovered, the results are made available to the captains of ships on the frontier.

The Hur’q present an incredible opportunity to learn from a new species of creature that lives a very different life cycle than other known species. The new Swarm Lockbox embodies the Alliance’s best efforts to replicate the capabilities of the Hur’q, and contains a ship, space weapons, kit modules, and traits.

Getting to work on the Hur’q was an amazing experience for the team. Being that the Hur’q were spoken of but never seen on-screen meant we had a lot of gaps to fill in bringing the Hur’q to life. Exploring their history, biology, and background granted us the ability to bring our vision of the Hur’q to you. We hope that you have enjoyed playing against the Hur’q this season, and that you will find this lockbox brings you a little closer to being one with the Swarm.

The Swarm Lock Box’s Grand Prize is a Hur’q Ravager Escort Carrier [T6]. Hur'q vessels serve the primary purpose for the insectoid species as mobile hives, housing multiple generations of Hur'q progeny and their Drantzuli attendants. Functionally little more than mobile starbases, these vessels are specialized for the harvesting of resources that keep the two-thousand-year Hur'q cycles intact. Ravager vessels seem to have originally been intended as resource harvesters and fast-moving cargo haulers, ferrying supplies between distant locations within Hur’q space. Their high-powered energy weapon mounts were once used as effective harvesting tools, but couple well with its high maneuverability to allow this ship to be easily repurposed as a front-line assault vessel. Despite a relatively civilian design (when seen through the unique lens of Hur'q society), these vessels are capable of a surprising level of self-defense, and can easily stand toe-to-toe with warships of other species. With minimal retrofitting, their harmonic interfaces can be made to interact with more conventional technology, and can thus be flown by most sentient species.

The Hur’q Ravager Escort Carrier comes equipped with the Amplifying Ravager Beam universal console. Upon activation, a ravager beam will fire directly in front of your ship for a short duration, dealing significant Kinetic Damage to all foes caught in its path.

After achieving level 5 in the Hur’q Ravager Escort Carrier starship mastery, you will unlock the "Nullifier Warheads" Starship Trait. While this trait is slotted, activating any torpedo firing mode will launch a flood of Nullifiers around your ship.

The Hur’q Ravager Escort Carrier has one hangar bay equipped with Hur'q Swarmers. These nimble fighters will harass foes from short-range with their mining lasers. They can also use Evasive Burst for brief increases to speed and maneuverability.

Captains may also purchase the Hur’q Assembly Multi-Mission Science Vessel [T6] from the Lobi Store. The Assembly appears to have originated as a long-range scout, with strong sensor suites and auxiliary systems designed for support roles and scientific endeavors, but highly adaptable to more offensive pursuits since the Hur’q transitioned into a ravening swarm.

The Hur’q Assembly Multi-Mission Science Vessel comes equipped with the Nullifying Tractor Field universal console. Upon activation, it significantly impairs your target's movement while dealing them heavy kinetic damage for the duration. Additionally, it floods the area near the target with Energy Nullifiers, which chase down the nearest foe and deal phaser damage and massively reduce the target's Engine Subsystem Power of any foes they impact.

After achieving level 5 in the Hur’q Assembly Multi-Mission Science Vessel starship mastery, you will unlock the "Hivebearer" Starship Trait. While this trait is slotted, launching Hangar Pets or your Hangar Pets dying will cause them to spawn an allied Swarmer to help fight, up to a maximum of 8 Swarmers active at a time.

The Hur’q Assembly Multi-Mission Science Vessel has one hangar bay equipped with Hur'q Swarmers. These nimble fighters will harass foes from short-range with their mining lasers. They can also use Evasive Burst for brief increases to speed and maneuverability

A special console can be acquired from the Swarm Lock Box as well: The Deconstructive Resonance Emitter Universal Console. When activated, this console utilizes your ship's deflector array to produce a field of Harmonizing Electromagnetic Waves. After a brief charge, it releases a sustained cone of electromagnetic energy that harmonizes with enemy ship hull materials and construction. The harmonization frequency causes vibrations that violently ripple through the enemy hull, causing severe damage, disabling and leaving their hull vulnerable to further damage until the vibration stops after a brief duration. It also features a passive increase to Phaser and Kinetic damage, as well as an increase to Starship Control Expertise.

Additionally, the Swarm Lock Box has new Space weapons within the Phasic Harmonic Weapons Pack. These weapons are capable of striking an enemy's hull in such a way as to leave it vibrating violently for a short duration, dealing significant damage in the process. Additionally, the weapon pack will have a chance to drop an Omni-Directional Phasic Harmonic Beam Array or Wide-Arc Phasic Harmonic Dual Heavy Cannons. That’s not all though, lucky captains will also be able to receive a Hur’q Vanity Shield from this pack. This vanity shield can be equipped in a ship’s vanity shield slot to gain the visual look of a Hur’q starship.

Captains may also find Swarm Kit Module packs. These Kit Modules are universal, and can be used by any class. These abilities can also be taught to your Bridge Officers in the form of Training Manuals.

New Captain’s Traits are also available within the Swarm Lockbox. They are universal and available to all species.

Captains who wish to delve further into the biological complexity of the Hur’q can do so in the Hur’q Research Duty Officer Assignments. Each of these five assignments yields high XP and Dilithium rewards. Completing all the assignments gives additional Dilithium ore and a Title!

There are many other prizes within the Swarm Lock Box for players to acquire, such as R&D Packs, Boosts, and other assorted items.

The Lobi Store also has a new Ground weapon available for purchase: The Hur'q Acoustic Resonator!

The Swarm Lockbox, as well as the additional Lobi Store entry, will be coming to PC in the near future.