Play as a Jem'Hadar in Victory is Life! 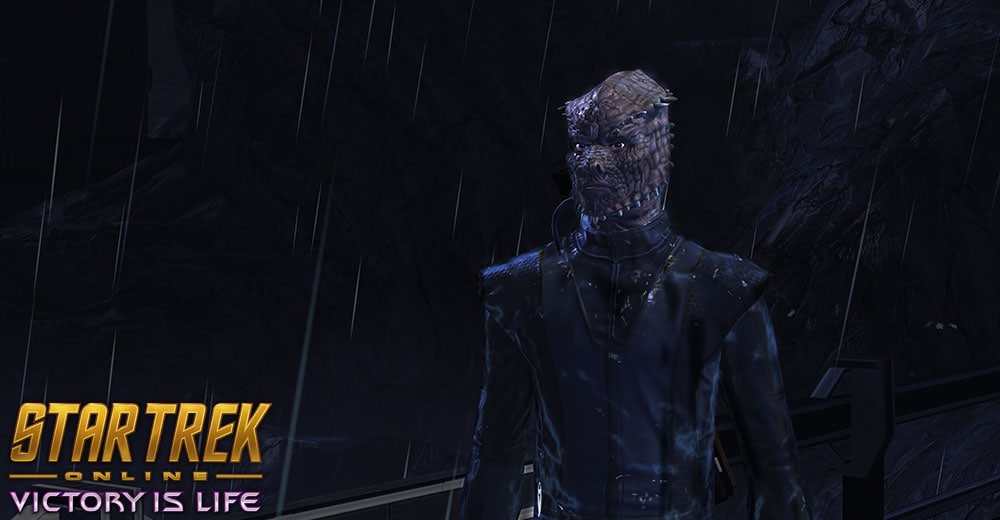 One of the exciting features of our upcoming expansion, Victory is Life, is the addition of an all-new faction for players, The Dominion. Home to the most impressive military might in the Gamma Quadrant, The Dominion was featured prominently on-screen in Star Trek: Deep Space Nine, and we’re excited to finally give players the opportunity to be a part of this mighty force. Their fearsome warriors, the Jem’Hadar, will be available for players to create and jump right into the current storyline with the release of Victory is Life.

In order to best serve the Dominion, Jem’Hadar soldiers are cloned – engineered from birth to the highest standards, as dictated by the Founders. This unique process has them combat-ready within days of being birthed. To reflect this side of their biology, and to allow players to immediately start experiencing the vast amounts of high-level content currently available in Star Trek Online, Jem’Hadar characters will all start at level 60, and receive a significant jump-start on the path to their new career as a First. This includes a fully-geared starship, shuttle, and crew of Jem’Hadar, as well as pre-completed progress in Crafting, Specializations, and Reputations! All Jem’Hadar will also begin with all of their Skill Points and Traits already allocated, and a free retrain to allow for you to make your Jem’Hadar your own.

The details of each Jem’Hadar’s pre-completed progression will vary depending on the profession path chosen when creating your character – Engineering, Science, or Tactical.

Jem’Hadar characters will be available for all players to create. Because they will start at high level, new players are recommended to have completed at least the Tutorials available to other factions, to familiarize yourself with the basic controls, concepts, and components of Star Trek Online. This game has years’ worth of content and updates bundled with it, so jumping into an advanced character may be a daunting experience.

At the end of their tutorial, Jem’Hadar will be presented with a choice of assisting the Federation or Klingon Empire. Which of these poor, pathetic Alpha Quadrant races most needs the help of the mighty Jem’Hadar is entirely up to you, and like the Romulans before them, Jem’Hadar will be able to command most of the starships of their allies.

The Jem'Hadar are a race of hardy soldiers, custom bred to serve as the military might of the Dominion. These engineered soldiers vary somewhat in capability and personality, but all are ready to defend the Dominion and serve the Founders with unswerving loyalty and dedication. All Jem’Hadar have the inherent ability to use Shroud, a special personal cloak enabled by Ketracel-White. Additionally, they have significant bonuses to their damage output in ground combat.

In addition to these traits, Jem’Hadar are able to benefit from a brief “rush” state when consuming Ketracel White. This unique boost lasts a short amount of time, but grants significant combat bonuses.

Available only in the C-Store, Jem’Hadar Vanguard are a special premium breed of Jem’Hadar specially bred under the careful eye of Odo. These soldiers are able to benefit from all of the same bonuses and abilities as standard Jem’Hadar, but their “Engineered Soldier” Trait has been upgraded to also include bonuses for Space Combat.

Stay tuned for more information on this all new playable faction, coming to Tribble soon!

Admiralty Bonus Event!
Captains on PC can earn bonuses to their Admiralty Projects this week!
Read more
Fleet Donation Changes!
Our latest update on PC brought more quality of life upgrades to our Fleet Donations program. Find out more here.
Read more
Save 50% on Lifetime, and 75% in Mudd's!
Save 50% on a Lifetime Subscription and 75% on most of Mudd's Market this weekend on PC!
Read more