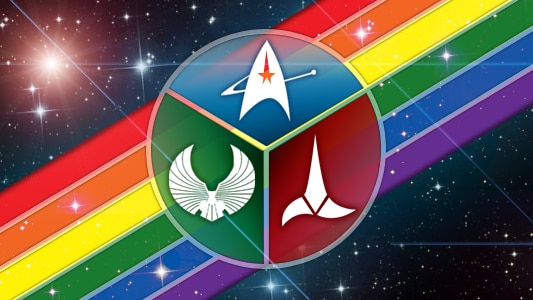 Many of us players here in Star Trek Online aren’t just fans of the game, but also fans of Star Trek. For us, this universe has a deeper meaning than just exploration missions, STFs and sorties. From the very beginning, Star Trek has been about diversity and acceptance. It’s easy to miss the messages behind the storylines today, but in 1966, Star Trek was revolutionary for its depiction of racial and gender diversity.

George Takei as Hikaru Sulu also broke stereotypes. At the time, roles for Asians in American television and movies were few and far between. Most were depicted as “cruel Japanese soldiers” or “bumbling Chinese waiters.” Star Trek changed that. Instead, Sulu was part of the leadership team, spoke without an accent, and was the best pilot in Starfleet, to boot.

At the time, America was still gripped in the height of the Cold War and feelings were tense toward Russians. Having Pavel Chekov, a Russian genius, work alongside Americans as part of the leadership team of the Enterprise was a huge leap forward. With his moptop hair, actor Walter Koenig was a heartthrob for many teens and his accent, which was inspired by his father's, added a touch of comic relief to the show.

Nichelle Nichols played the role of Nyota Uhura, the African female Chief Communications Officer. After the first season, Nichelle was thinking of leaving the series to return to musical theater; however, a chance meeting with Dr. Martin Luther King, Jr., changed her mind. With excitement, he confessed that Star Trek was the only show he allowed his children to watch. When Nichols revealed that she was thinking of leaving the show, King replied, “Don’t you understand? For the first time, we’re seen as we should be seen. You don’t have a black role. You have an equal role.” After that, Nichelle decided to stay.

Nichelle staying allowed for a big TV first to happen in Star Trek. In “Plato’s Stepchild,” Uhura and Kirk lock lips in the first scripted interracial kiss on television. As strange as it is to think now, there were some concerns as to how audiences would take the kiss. They even filmed several alternate takes which omitted the kiss, but during each Shatner crossed his eyes to ruin them. In the end, the TV execs decided to use the kiss and history was made.

The “Pa’nar Syndrome” storyline is one of my personal favorites in Trek. In the first season of Enterprise, T’Pol becomes infected with the deadly disease. When Dr. Phlox attempts to contact the Vulcans for a possible cure, they use her infection as a reason to remove her from her post. As they see it, Pa’nar Syndrome was a disease only found in an undesirable segment of Vulcan society, Syrrannites. Her infection was indication enough that she was part of the aberrant minority, despite Captain Archer’s insistence that she was infected against her will. The parallels between Pa’nar Syndrome and HIV/AIDS are staggering and were meant to be so. The storyline drew directly from the struggling of gay community during the HIV epidemic in the 80s. At the time, Viacom and Kiaser Family Foundation were working together to raise awareness about HIV/AIDS and this was Trek’s addition to the cause.

In “Let That Be Your Last Battlefield,” two aliens from the same species, previously unknown to the Federation, confront on the Enterprise. Bele is a commissioner that’s been chasing Lokai for 50,000 Earth years as he is a dangerous criminal; just as is his entire race. According to Lokai, he’s a freedom fighter and a revolutionary whose only crime is trying to free 100 million people from slaver by Bele’s race. When pressured, neither Kirk nor Spock can tell a difference between the two races. To their astonishment, Bele blurts out “I am black on the right side… Lokai is white on the right side.” Upon returning to their planet, they find it in ruins. There entire race has been destroyed because of the slight difference in the color of their skin.

In “The Outcast,” Star Trek challenges our understanding of gender. The Enterprise is called in to help the species of J’naii when one of their shuttles is lost. Riker puts on his usual charm and before long, him and Soren, one of the scientists working with him, has developed feelings for each other. Unfortunately, the J’naii is an androgynous species and while Ricker seeing nothing wrong with their attraction, Soren knows her species would not approve. Attractions to one gender over the other or expressions of gender are forbidden. When they are founded out, Soren is sentenced to be “cured” by her people.

"I am female. I was born that way. I have had those feelings, those longings, all of my life. It is not unnatural. I am not sick because I feel this way. I do not need to be helped. I do not need to be cured. What I need, and what all of those who are like me need, is your understanding. And your compassion. We have not injured you in any way. And yet we are scorned and attacked. And all because we are different. What we do is no different from what you do. We talk and laugh. We complain about work. And we wonder about growing old. We talk about our families and we worry about the future. And we cry with each other when things seem hopeless. All of the loving things that you do with each other - that is what we do. And for that we are called misfits, and deviants and criminals. What right do you have to punish us? What right do you have to change us? What makes you think you can dictate how people love each other?"

- Soren, to Noor, asking for acceptance for gendered people like her.

These are just a few examples of Star Trek’s commentary on our society. Just as Star Trek has inspired inventors to create new technology and innovations, it has also pushed our culture grow more accepting of diversity. It has helped us question our own prejudices and stereotypes and grow more accepting.

My fleet, Stonewall Fleet, is a gay, lesbian, bisexual, transgender and straight ally fleet, and every year we celebrate our own corner of diversity by hosting a weekend of events in remembrance of our name sake, the Stonewall Rebellion. We are proud to host the Fourth Annual Pride Weekend this month. Every year, we open this event to the entire Star Trek Online community so they can come celebrate this historic event with us. The event will span the weekend of June 29th and 30th with events planned throughout the days. As well, we have prizes available for participants and contest winners. We welcome anyone who would like to attend. To participate, please join the public, in-game channel: STOPride

Gene Rodenberry’s original vision of Star Trek was that the Enterprise was a sort of Starship Earth. He wanted to depict all races, genders and nationalities working together to solve problems. I think he did that and far more. The Federation is now a symbol of diversity and acceptance, and we can now take a lesson from Star Trek. In Star Trek Online, we are frequently in contact with players from different nations, genders, languages, sexual orientations, gender identities, and religions. We need to accept that diversity and treat each other with respect. After all, we’re here because of our shared love of Trek.

Thank you, and I hope to see you next weekend during the in-game Pride festivities,

Do you Believe in a No Win Scenario?
Face the toughest tests that Starfleet and the Klingon Empire can muster, and get access to two new ships with epic Admiralty Cards, and progress in our Event Campaign 2!
Read more
PC Patch Notes for 5/28/20
Check out all the exciting changes coming to Star Trek Online in our latest patch notes!
Read more
Bonus Dilithium Week!
Captains on PC can earn Bonus Dilithium this week!
Read more