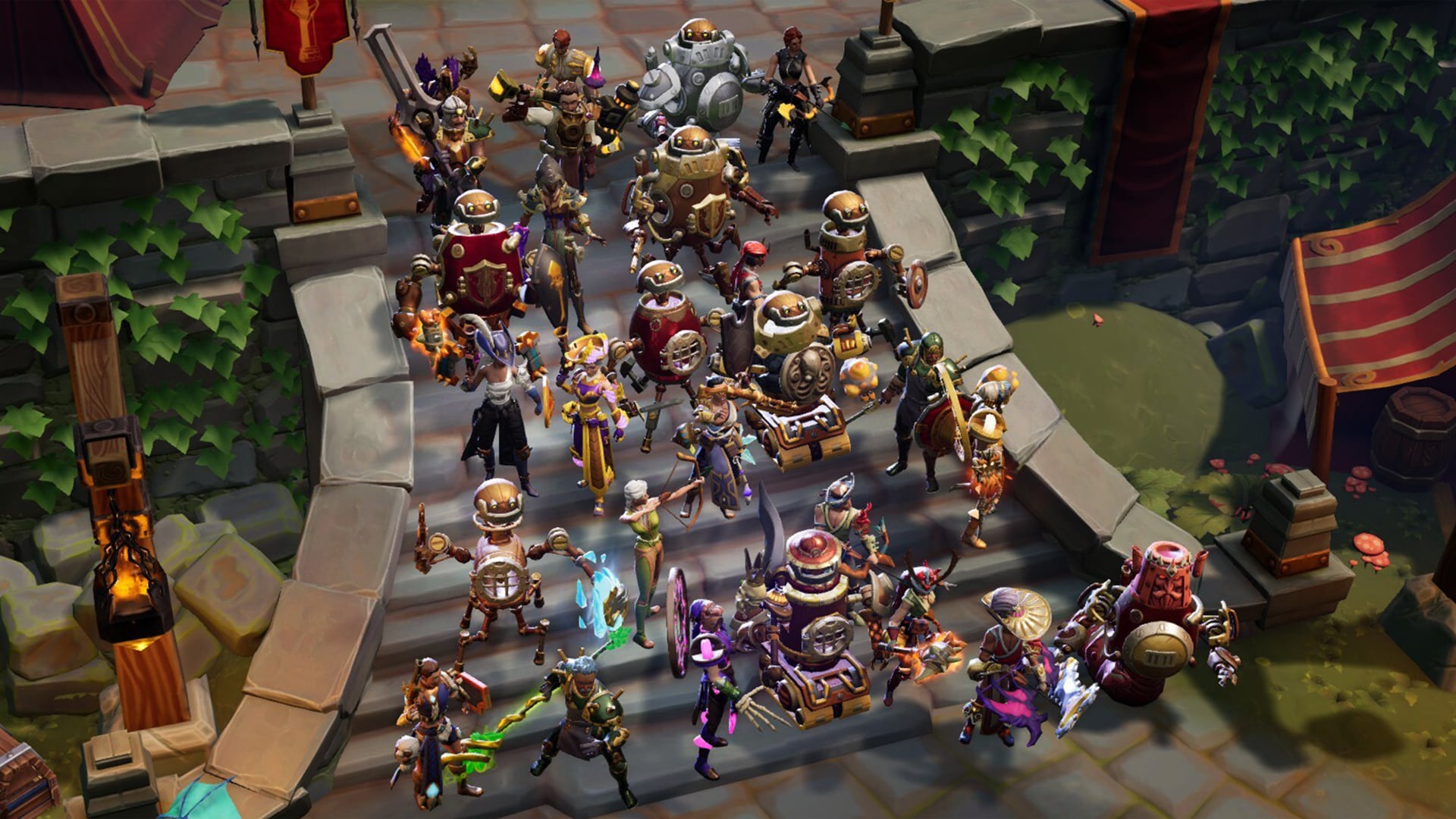 First off and foremost, we want to thank the community of Alpha and Closed Beta testers who provided incredible support and feedback to our team. Your bug reports and countless hours playing the game continues to make it a better experience for all of the Torchlight community. At Echtra, we believe in listening to our fans to improve the game, and with our tester’s help we made several major changes over the last 18 months - including renaming the game and changing the business model.  For those of you who are just joining us and are interested in the game’s development,check out our previous blog posts and Twitch streams.

As we progress through Early Access on our way to Launch, we will provide a regular State of the Game update.  This first update is unique in that it focuses less on “what’s changing?” and more on “what is this game?”  For many players, this is the start of their journey with Torchlight III, and we welcome you!  Hopefully, this post helps catch everyone up on what’s in Torchlight III.

Before we go through the content and feature headlines, I want to briefly talk about Torchlight III’s character system.  In many ARPG’s the vast majority of a character’s strategy comes from class skills.  Character class skills are important in Torchlight III, but other aspects play a large role in a character’s power too.  Relics, pet skills, legendarium skills, enchanting, weapon type, and legendary items come together to really make a big impact.  Relics in particular can be a huge part of a character’s success - with 2 active skills and several powerful passive effects.  (Relics will also be getting some significant improvements in our first big Early Access patch.)  So make sure to include all 5 skill tabs when looking at how to build your character - the combinatorics are vast.

Our goal for Early Access is to continue to improve the game together with you. Here’s what’s in store for Torchlight II players right now:

Torchlight III will have four classes at launch: Sharpshooter, Forged, Railmaster, and Dusk Mage.  Our goal has been to offer some interesting, new ARPG classes that players will enjoy exploring.

The Sharpshooter strikes with a combination of ranged weapons and magical trinkets that unleash powerful spirits. Nimble, cunning, and willing to bend the rules to acquire the tools they need, they can use bows to unleash a number of special attacks to slay enemies at range. They do not fight alone, either. To boost their attacks the Sharpshooter can activate any one of their magical trinkets they’ve acquired through their adventures to boost their attacks and channel the spirits of beings to battle alongside them.

The Dusk Mage taps the power of Ember by balancing the forces of light and dark. Fleet of foot, mysterious and elusive, the Dusk Mage channels the light with precise ranged attacks, while embracing the chaotic darkness with destructive curses and multi-target missiles. There are big bonuses for alternating light and dark skills, encouraging Dusk Mages to use precision or chaos depending on the situation.

The Forged, a true mechanical marvel, has the soul of a genuine hero. Equipped with a chest cannon to take down foes from afar and a host of mighty melee moves, the Forged uses strength, heat, and an indomitable spirit to slide through foes. Whether generating heat to grind opponents to a pulp, or incinerating monsters with vent mechanics, the Forged is a technological tour de force with lots of heart.

As a guardian of the Frontiers, the Railmaster can engineer a solution for every problem. Followed by a literal train of pure explosive destruction, the Trailmaster can pound and blast enemies into oblivion while shielding their party from harm. Friendly, loyal, and always ready to battle, the Railmaster is always on track for action.

Riddled with goblins and fire based mayhem, this forest is home to several locals including the dangerous and murky depths of Lake Gobdunk. Players visiting this landmark might find themselves in the Belly of the Beast, facing off against Strongtusk, a Netherim Thrall. Players can congregate and gather in groups in Trevail Point, a local town known for its simple fare and the presence of General Graye, a commander for the forces on this continent.

ACT 2: INFESTED FOREST
Poison-filled passages full of many-legged creatures await adventurers willing to battle through the Infested Forest. After finding a way through many creepy-crawly caverns of the Twilight Depths, players who dare enter the Netherim Chamber will find themselves confronting Sadista, whose monstrous form now controls the Hyvid through corrupted ember.

Alpha and Closed Beta testers may notice that Act 3 is currently unavailable, along with some mechanics related to Act 3. We plan to release this Act during Early Access after some final polish and testing. Concentrating players in the first two Acts will also help focus the feedback we’re getting in the first stage of Early Access and allow us to make changes to Act 3 before it goes live.

Because of this, we have also locked some other elements of the game that really belong together with Act 3, including disabling the Contracts system.

While currently turned off until the release of Act 3, Contracts provide players with an array of unlockable items including consumables like gold and resources, additional pets and storage, and a huge variety of fort props. Players can complete Contracts by earning Fame, which is gained by completing quests and killing notable monsters.

It wouldn’t be Torchlight without Pets! From the beginning of your journey you will be able to select from three different pets who can help you destroy enemies in battle. During your conquests you can collect new pets, each varied in visual style and skills, and swap between them via your Fort’s Pet Shelter. Your pets can haul collected treasure from the frontier to town to sell and have their own equipment slots to manage and upgrade.

Adventurers on the frontier can reclaim their territory and gather resources to build a customized fort to store their plundered items and gear.  Other players can see your fort as they journey through the world and will visit it to do various activities. There are three types of fort props that can be collected throughout the game; functional, storage, and decoration. Functional items include crafting (Enchanter’s Altar, Reliquary, and resource refining), monuments (see below), and skill stations (which allow players to retrain their class skills). Storage props allow players to stash currently unneeded items, pets, and gear away, while decorative items will make your Fort distinctly unique. Fort props can be found as quests rewards and in Contracts (once unlocked) and with hundreds of props to find and build, no one fort on the frontier will be the same as another.

Relics are a vital part of a character. Choose wisely! Relics are unlocked and managed through the Reliquary in your Fort. Relics level up as you fight, unlocking new passive bonuses for the players to choose from. Level 5 also unlocks the gold-bordered active skill - which you can place in the action bar alongside character class skills. Additionally, relics have passive mechanics to aid in your character’s build,and a powerful relic activation skill ideal for screen-clearing moments when faced by overwhelming odds.

There are many monuments you can build in your Fort including the Luck Tree. These monuments require a sacrifice in order to level-up, but will provide you with powerful bonuses that will aid you on your Torchlight III playthroughs. Other people who travel to your Fort can also sacrifice items to gain an additional boost.

Each Act in Torchlight is accompanied by a town full of vendors and NPCs. Vendors are available to sell you potions and basic gear, while the local gambler will tempt your luck in finding that desperately needed Legendary item. When playing in multiplayer you’ll see up to 40 other players in town with you. It is more likely that you will find players in your region, but you can always group up with others by opening the social menu and inviting your friends there.

Want to wander the frontier with friends? You can invite up to three others to join you in a party on the frontier either by using the social menu in-game and inviting your Steam friends directly or by right-clicking on a name in chat to open the social menu. Speaking of right-clicking on chat, this is a good way you can also report abuse and send messages directly to people in-game.

A new end game experience is currently in development and will be deployed for player testing in Early Access. This experience will be released after Act 3 is available and is intended to provide playtime/progression for those who have finished the base game.

QUALITY OF LIFE UPDATES - The Railmaster has gotten an Endurance makeover, be sure to check out the upcoming patch notes for all the updates to Railmaster since Closed Beta ended. There are several additional quality of life updates that are currently in development or are being planned for future updates. We recommend perusing our Discord or Support Center for more details.

LAUNCH - You can read our Early Access FAQs here. While we don’t have an exact date for launch, Early Access will continue at least for a few months while we release and test additional content. It is important to note that at the end of Early Access there will be a wipe of all character data which allows us to more aggressively test new features, bug fixes, and content during the Early Access. You can review other Early Access FAQs, including questions around Alpha and Early Access rewards, on the Arc support website.

KNOWN ISSUES - You can search and submit new issues on our Support Center. We regularly review this area for new bugs and suggestions with dev responses and comments.

NDA (Non-Disclosure Agreement) - Unlike our previous testing periods there is no NDA for Early Access. Please stream, create, and share everything Torchlight III! Content taken from the period under NDA is still under NDA. Please do not share images/videos of content created during this timeframe.

Thank you for joining us in Early Access and we hope we are able to bring you the same joy that the previous games have provided the community for years. We are excited to see the game evolve over the new few months and beyond launch.