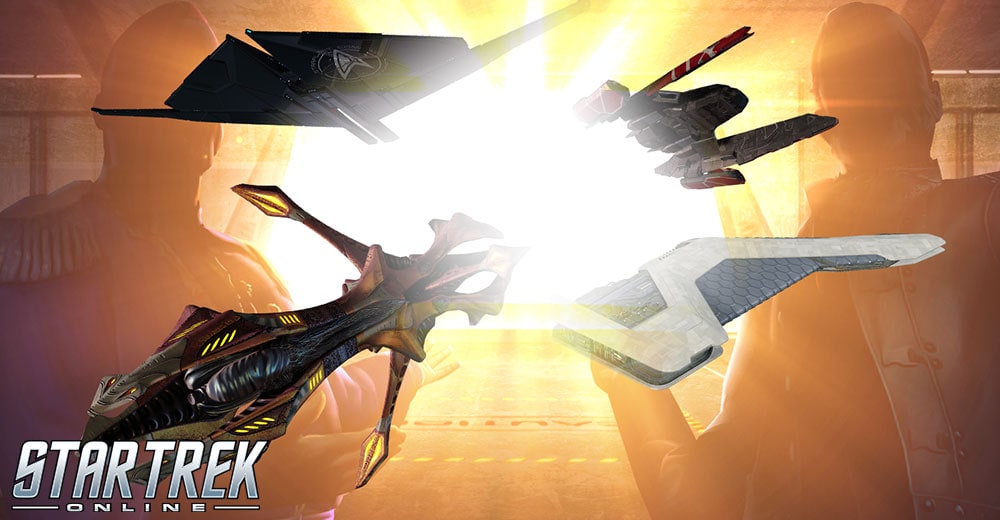 I see you. Your friends over there are eyeing the large ships, the ones that hold thousands of little fighters, or command entire fleets. But I see those wings on your lapel. You're looking for something a little more...agile, yes? Step into my office.

What if I told you I've got a little private stash of some ships with a little more...zip? Now, of course, these are only for my most discerning customers. But I liked you instantly upon seeing you. And I think you'll know what to do with a ship like this Heavy Raider. The most famous of her class, La Sirena, was instrumental in saving the galaxy several times. Or perhaps you're looking for something a little more...frowned upon by the federation? What about a ship designed to be staffed by synthetic lifeforms? Or a bio-engineered Warship from an alternate dimension? How about this beauty - she's from the future. Temporal Investigations would flip their lid if they knew I had this. But you know how to stay off their radar, don't you? Right this way...

SPECIAL BONUS – Buying any version of this pack will unlock Cross-Faction Flying for your entire account! Any character on your account will be able to fly any of these ships of their choice.

This is a once per account purchase. When purchased, it will disappear from the store. If you'd like, you can still purchase the Fighter PIlot Pack for more of the non-ship items.

Yes! Even if you only purchase it once, the Mudd's Fighter Pilot Choice Pack allows you to choose any three of the above ships, upgrades and more. You can choose multiples of the same item, as long as its not a ship.

Also no. Because the ships are unlocked for your entire account, you only need to choose each ship once. Therefore, should you purchase a bundle and choose the Kweijan Frigate and two non-ship items, if you purchase a second bundle, you won’t be able to choose the Jem Hadar Recon Ship again.

That’s right. If you only want Upgrades, you can purchase this bundle once, choose the Upgrades three times, and get 30 Upgrades. It’s up to you!

Yes, unless you buy the MEGA Bundle.

No! If you just want three of the ships, or any other combination, just purchase it once, claim the three items you want, and never think of it again.

Which of these ships would win in a race?