The Knox Box has been extended until December 9!

You’ve heard of “A Box for Knox” but now, for a limited time, prepare for A Box from Knox!

The Knox Box is a new reward box that offers guaranteed rewards after opening a certain number of boxes. The tooltip also indicates the chance of getting any given item. 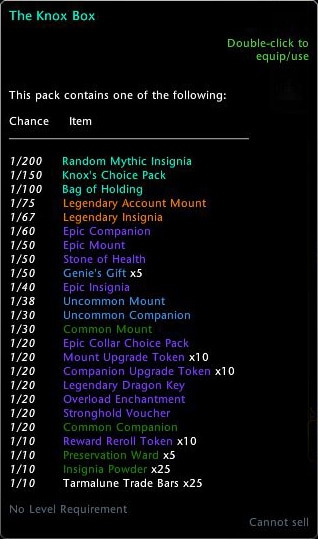 The following items are guaranteed rewards at the specified box open amount:

Once 150 boxes have been opened, the bar will reset and can be filled again. 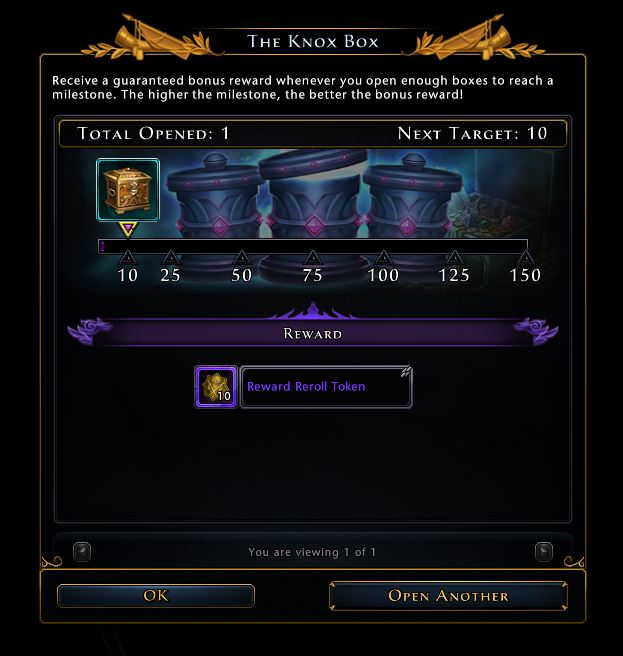 Zen Market – Knox Boxes can be purchased in the Zen Market (10 Boxes for 525 Zen - Price includes the 30% off discount currently occurring).

Dungeon Chests – While the Knox Box is active, there is also a chance for these boxes to drop from dungeon chests.

Reward Claims Agent – All players will get 5 free Knox Boxes per account, claimable at the RCA while Knox Box is active (see dates above). The contents of Knox Boxes obtained via the RCA are bound to account.

Promises Made, Promises Kept – In honor of the formidable Sergeant Knox, Lord Neverember will allow players to exchange up to 3 Promissory Notes per account at the Wondrous Bazaar for a free Knox Box per note. The contents of Knox Boxes obtained via Promissory Note exchange at the WB are bound to account.