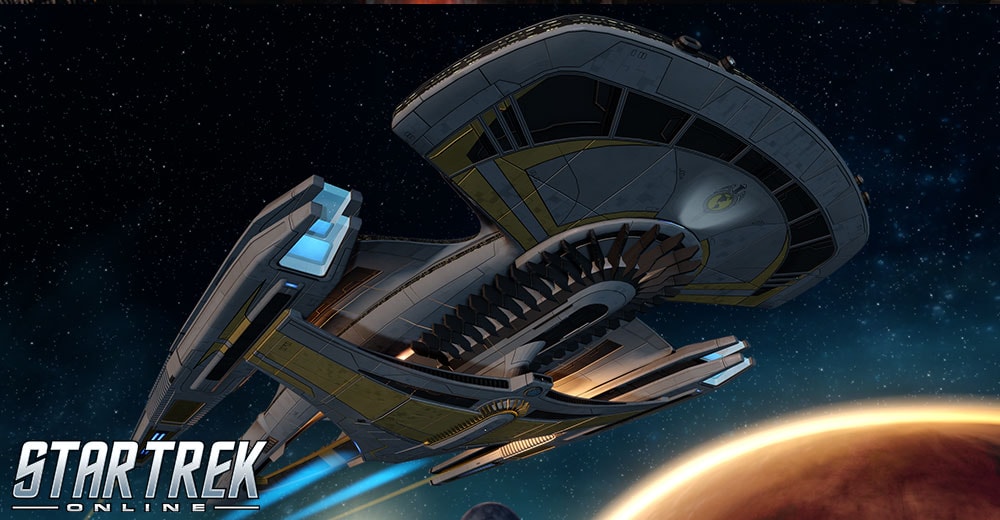 Starting on August 2nd, 2022, players on Xbox and Playstation will have the chance to obtain and captain the Terran Acheron Dreadnought Carrier (T6). This intimidating modern refit of the existing Styx-class has appeared as the flagship of the Terran Emperor in the current ongoing story episodes. Claim it now for your own use and turn the tides of conflict against the Mirror Universe before it is too late.

The modern flagship of the Terran Emperor is a dreadful sight to behold. Building upon the already-imposing framework of its predecessor - the Styx-class Dreadnought Cruiser - this modern refit has been further enhanced with systems capable of manipulating the local space-time continuum, in an attempt to emulate the abilities of the Emperor himself. With these deadly tools in its arsenal, it is no surprise that the Acheron strikes fear and hopelessness into enemies of the Empire whenever it appears in orbit.

The Terran Empire is nothing if not inventive with its warfare. Its ability to generate cross-dimensional portals for travel or offense have been combined within this specialized warhead to create a temporal anomaly that uses its own probability-clones to inflict damage on their enemies. Each warhead will approach a foe and then lock itself in local space-time before generating micro-anomalies that draw in other versions of itself from nearby multiversal probabilities, and launching those additional projectiles at nearby foes. While the targeting can be erratic, the explosive yields more than make up for it. Each foe impacted by the original or its duplicates suffers a radiation explosion, which will also slow down their temporal footprint, reducing their speed, turn rate, and weapon firing cycle speeds.

This console additionally provides a passive bonus to Turn Rate (only while at Full Impulse) and a Cooldown Reduction for all Universal Consoles. This console may be equipped on any ship in any console slot.

With this trait slotted, foes hit by your Energy Weapons will attract one another at random while you are under the effects of Beam: Fire at Will or Cannon: Scatter Volley. The gravitic attraction will target a Foe up to 5km away, choosing farther away targets first.. If the only valid targets are in close proximity, the gravitational resonance will cause a small kinetic explosion instead of pulling the ships toward one another. If an enemy ship causes one of these explosions, it cannot do so again for several seconds.

These fighter pets are unlocked in their stores listed below as long as you own this ship, or the Styx-class Dreadnought Cruiser. Once unlocked, these hangar items may only be equipped on these two ships.