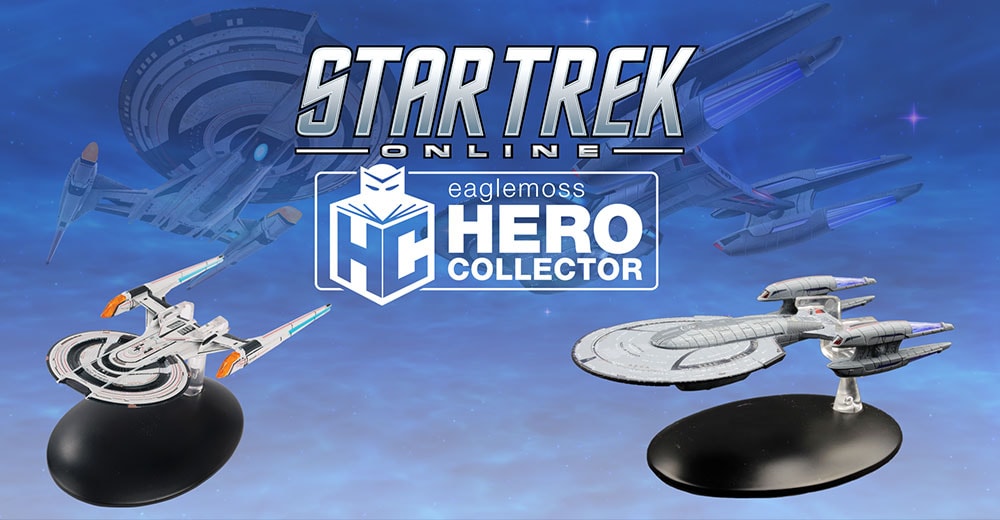 Last summer at Star Trek Las Vegas, we revealed the exciting announcement that Hero Collector, the company that produces the Star Trek Starships Collection, would be producing a line of ships from Star Trek Online. Last weekend, at Destination Star Trek, we took the stage with Hero Collector to announce the first two ships of that line! Now, you can get your first look at the Gagarin-Class Federation Battlecruiser, and the Cimera-Class Federation Heavy Destroyer, coming soon!

Star Trek Online players may remember the Chimera-Class Federation Heavy Destroyer from Victory is Life, the game’s exploration into Deep Space Nine. This massive Federation starship was commanded by Nog, Starfleet’s very first Ferengi captain. The ship will be released as a loving tribute to the actor who brought this character to life in the show and within the game, Aron Eisenberg. The Gagarin-Class Federation Battlecruiser is another powerful Starfleet vessel that was released by Star Trek Online’s ship designers last year to celebrate the popular CBS series, Star Trek: Discovery, and one of the most popular Federation ships in the game.

We're so excited to get this chance to work with the folks at Hero Collector, and can't wait to give you another chance to have the ships of STO on your shelf or desk, sitting alongside the other Star Trek ships from the Starship Collection. Below, you can get a look at the Gagarin prototype right from the show floor!