Welcome to Our 8th Anniversary! 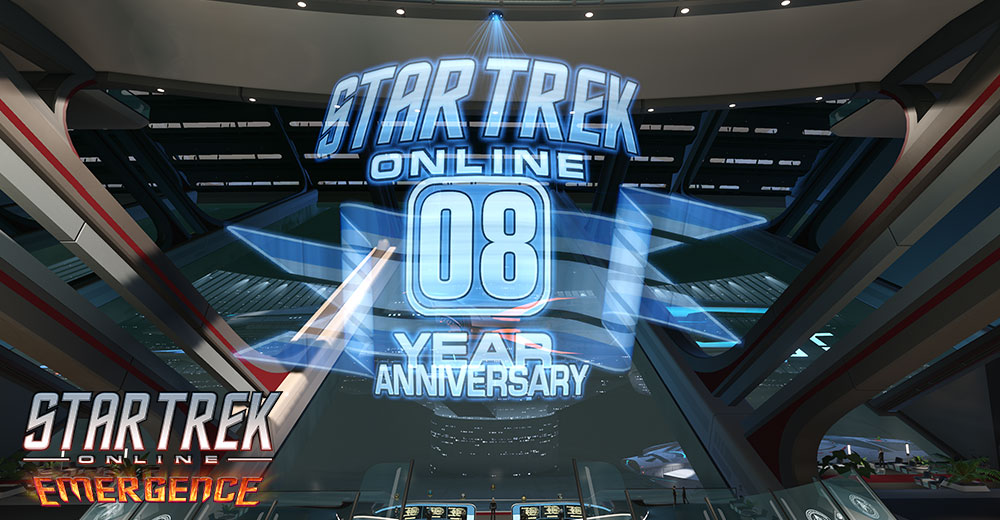 Nothing is guaranteed when you’re making a video game.  I can remember over eight long years ago when we were just about to release Star Trek Online to the world, we were proud of what we created and couldn’t wait to show everyone.  The team was curious how the game would be received.  Would people like our take on this rich universe? Would people show up to live out their dreams of being a Captain in Starfleet or the Klingon Defense Force?  There were hushed hallway conversations, as if we were discussing the haunting of deck 12, wondering if the game was successful how long of a run could it have?  Many online games don’t last more than a couple of years, could we do better? Could we match the length of the longest Star Trek series at seven years?  Like I said, in the video game industry nothing is guaranteed and risk is everywhere…but on the Star Trek Online team risk is our business.

Star Trek Online is eight years old this year, and has surpassed the longevity of any Star Trek series that has ever existed.  We’re now the longest-lasting touchstone for this 51 year franchise, and still going as strong as ever.  In a year where you could enjoy Steppenwolf’s “Magic Carpet Ride” as you launch your own model Phoenix, as well as the dulcet tones of the Star Trek Online team’s “Artisanal Audio” April Fool’s joke, I think you’d have to ask Cadet Tilly of the U.S.S. Discovery how awesome 2017 has been.

This past year brought a brand new story arc to the forefront that was teased in 2016, but really took shape in 2017, with the introduction of a devious new foe in the Tzenkethi.  Heard of on several shows but never seen, they provided an excellent opportunity for the art and design teams to stretch their legs and create an enemy group with a truly unique look and play style.  The Alliance fought against the Tzenkethi’s surge of genocidal aggression across the Alpha Quadrant, while getting assistance from a couple of classic allies along the way.  We were able to add the voice talents of J.G. Hertzler’s General Martok, and the incomparable Levar Burton as Geordi La Forge.  This all-out defensive struggle for the Alliance has gone back and forth all year, and will finally come to an epic conclusion today with the release of our 8th Anniversary Episode ”Scylla and Charybdis.”

In addition to this amazing story line, we added some fantastic features that help bring you even deeper into the universe of Star Trek Online.  The Tzenkethi were introduced with some fantastic queues, as well as a brand new Battlezone with challenging new mechanics.  We expanded the R&D system with the new Kits and Modules school to let you further customize your ground combat experience.  Next up, we added competitive PvE gameplay through our Wargames content, allowing players to compete against each other without having to directly engage in combat with their opponents.  Along with that addition, we completed a total rebalance and revamp of our Space and Ground skills.  The skills were made clearer, more straight-forward, and ensured every choice a captain chose to make was valuable.  Later in the year, we added the Endeavor System, offering Captains a new challenge to complete for a reward every other day.  This system has served to strengthen the community and bring them together to experience content from across the game's lifetime, and showed new players of STO corners of the game they may have never seen. In our final season of 2017 we added a brand new Primary Specialization in the Miracle Worker Spec, and our first Five Tier Fleet Holding since the launch of the Fleet System.

2017 was an absolutely fantastic year for Star Trek with the release of the amazing new show Star Trek: Discovery, and for Star Trek Online with amazing seasonal updates of story content and features.  We’re looking to push Star Trek Online to new heights in 2018 with new story lines and a major update that will have Morn talking the ear off of anyone that will listen.

With over 160 episodes and eight proven years of updates, there has never been a more exciting time to jump in to Star Trek Online.

Happy 8th Anniversary, and I can’t wait to see you in game!