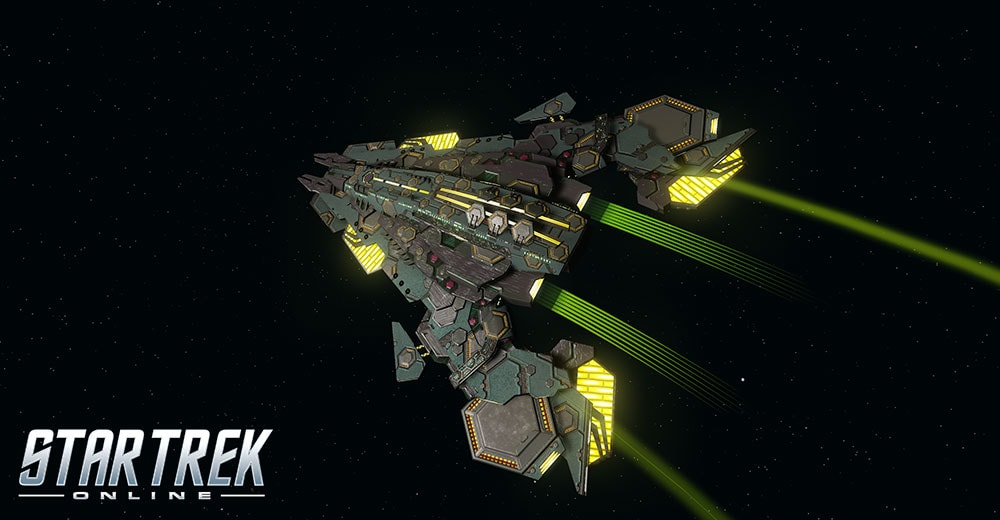 Although reports of similar alien encounters have been recorded as far back as the 22nd Century, it wasn't until their ships first appeared in Romulan space that the Elachi finally came to be known by name. Since these mysterious, silent adversaries began working in concert with Tal Shiar forces, they have mounted a series of devastating attacks on colonies and settlements.  They are believed to be responsible for hundreds - possibly even thousands - of disappearances in this region of known space. These abductions have struck fear into the hearts of many species in the Alpha and Beta Quadrants, and people across the galaxy now look to the skies and wonder if the Elachi will be coming for them next.

During the many clashes between Elachi, the Romulan Republic, and its allies, many examples of Elachi technology have been recovered.  This tech is now being adapted to help fight these silent enemies. Elachi technology may even allow ships to someday explore subspace, where the Elachi apparently have the ability to safely travel and even construct stations for their fleets.

Study of this technology is still ongoing, but initial findings indicate a possible link between the Elachi and artifacts of Iconian origin. What the connection between these species could be is yet to be determined. And the Elachi themselves have not been known to talk about anything, much less divulge the secrets of their origins.

The mysterious aliens seen in the Enterprise episode “Silent Enemy” are an intriguing part of the Star Trek mythos that we’ve wanted to introduce into the story of Star Trek Online for quite some time. Attempting to build their story from what little was divulged onscreen was both a challenge and an inspiration. Since such a small amount of information was established about the aliens that were previously nicknamed “Shroomies,” we had plenty of opportunity to address the questions that were never answered in the episode: What did they really want? Where did they come from? Why have we not seen them since the 22nd Century?

The Elachi Lockbox features a very unique and agile escort as its Grand Prize: The Tier 6 Elachi S’ateth Escort. The Elachi S’ateth Escort comes equipped with a Console – Universal – Enhanced Crescent Wave Cannon. This ability allows the ship to release a massive barrage of disruptor energy at targets within their frontal cone after a brief charge-up period. Due to the overwhelming energy released in this barrage, the ship's forward shields will be briefly disabled by this blast, leaving them vulnerable for a short period of time. This console can be equipped on any Elachi vessel. This console also passively provides a bonus to Directed Energy Damage and Maximum Shield HP. After reaching level 5 in Elachi S’ateth Escort [T6] Starship Mastery, you will unlock the Crescent Wave Discharge Starship Trait. This trait will allow your starship to automatically discharge deadly Crescent Wave blasts at your target when certain criteria are met.

Also available from the Lobi Crystal Store is the Tier 6 Elachi Ornash Battlecruiser. This vessel’s distinctive vertical silhouette has become recognized as a fearful enemy for any ship confronted by the fleets of the mysterious Elachi.

Ornash Battlecruisers come equipped with a Console - Universal – Enhanced Subspace Transceiver. Activating this console will enable the launch of two small support craft from the vessel. These craft are unmanned and controlled by onboard computers which specialize in Control and Support combat subroutines. The Control Craft will attempt to use abilities such as Viral Matrix on enemy targets, while the Support Craft will focus on restoring the shields and hull of nearby allies. This console can be equipped on any Elachi vessel. This console also passively provides a bonus to Maximum Hull HP and All Damage Resistance Rating. Additionally, achieving level 5 in this ship’s Starship Mastery will unlock the Subspace Reinforcement’s Starship Trait. While slotted, you will summon support craft when you suffer heavy damage.

(When equipped on the S'ateth Escort, the support craft will be summoned using a special subspace frequency, instead of launching from the ship's hull.)

Additional vessels will be available within the Elachi Lock Box, in the form of Mirror Universe Starships.

Apart from these starship offerings, players will also have a chance of winning a number of additional interesting, fun, and rewarding prizes.

In keeping with the theme of Elachi technology, this lockbox contains a new Universal Console that can be equipped on any starship. This console is a bit of salvaged technology known as the Console – Universal – Subspace Integration Circuit.

This salvaged Elachi technology is infused with subspace energy frequencies. Launching a probe charged with this energy will cause a localized fusion between subspace and normal space. It disrupts the operation of any enemy starships caught within the rupture by limiting their perception and flight speed while simultaneously disabling their weapons and bridge officer abilities. The subspace rupture will collapse after several seconds, causing damage to any ships that remain within the disrupted region of space.

A new selection of Genetic Resequencers will be made available to players, allowing for new Traits to be slotted into any available Trait Slot.

The new Traits becoming available with the Elachi Lock Box are:

Your soft tissue heals at an extremely fast rate, allowing for superficial wounds to close quickly. This translates to increased natural regeneration, improved effectiveness of heals, and a resistance to damage-over-time effects.

Your mastery of personal firearms allows you to utilize special firing modes with more frequency than an average soldier.

An affinity for coordinating attack patterns among small craft allows you to deploy your Hangar Craft with increased effectiveness.

In any command scenario, your natural charisma and unflinching command allows you to inspire your crew to new heights of performance.

As an added benefit of the victories that have been won in the continuous battle against the Elachi, many survivors have been rescued from their nefarious clutches. These brave Elachi Survivor Duty Officers have eagerly signed up in the fight against their former captors, and are now available for duty on starships of any allegiance. In addition to standard active roster abilities found in current duty officers, each Elachi Survivor Duty Officer possesses an additional “Elachi Survivor” active ability which increases the damage potential of their captain and crew while in combat against these unscrupulous enemies. This additional bonus damage functions on both Space and Ground regardless of the roster slot they are assigned to, and has no stacking limit – you can benefit from as many Survivor Duty Officers as you have active roster slots! All of these officers are Very Rare (Purple) quality, and two officers will be added to your Duty Officer Roster each time this reward is won.

Over the course of many battles fought against the Elachi, examples of their distinctive Crescent Weaponry have been salvaged and repurposed for use as standard starship and personal armaments. The Elachi Lock Box will have a chance of containing a Weapon Pack that will reward players with these new variations on Disruptor energy weapons. All of these weapons have a chance, with every shot, to completely bypass the enemy’s shields and a portion of their damage resistance. All bolt and cannon weapons also reflect the iconic crescent-shaped bolts seen in use on Elachi vessels, and the ground weapons have a new and distinctive look. Since these weapons utilize Disruptor energy, they will still be boosted by abilities and equipment that improve other Disruptor weaponry. Players at any level will obtain a Very Rare / Purple quality weapon that is appropriate for their level, while Vice Admirals and Brigadier Generals will also have a chance of finding Mk XII weaponry within these packs.

An all-new 3-Piece Space Set also being added to the Lobi Crystal Store will allow players to combat the Elachi using some of their most potent experimental weaponry against them. The Heavy Crescent Wave Cannon can be fitted on any starship and has a 180-degree firing arc. This weapon is similar to existing single cannon weaponry except that it fires fewer bolts in shorter, much heavier bursts, with a longer cooldown between firing cycles. The Elachi Subspace Torpedo causes local disruptions in subspace at the point of impact, without causing permanent damage. This temporary distortion has a high chance of briefly disabling the ship functions of enemies caught in the blast. Available alongside these two potent weapons is a Universal Console – Bioneural Infusion Circuits, which enhances many different ship systems. Equipping any two of this set will enhance your Shields and Disruptor Damage, while having all three pieces fitted on a ship will cause an effect known as Haywire. Once Haywire is in effect on your ship, you will periodically gain orbiting energy charges which have a chance to reflect incoming energy weapon fire in the form of Disruptor Pulses that penetrate the shields of the enemy which triggered the pulse. Haywire is more effective if this set is fitted onto an Elachi starship.

Scientists and engineers have been very curious about the drones and turrets frequently seen in use by Elachi ground troops, ever since they began appearing at abduction and invasion sites. Their apparent ability to function completely autonomously from their commanders, even in complex combat scenarios, led many to speculate that they may actually be sentient. Study of these drones has proven otherwise however, and some more enterprising engineers have managed to completely reprogram these automatons for use in combat. Drone Constructor devices can be purchased on the Lobi Crystal Store, which each contain a single charge and will each deploy a temporary combat ally of one of three types:

A handheld version of the Crescent Blast Turret has also been discovered in use by high-ranking members of Elachi ground forces. The Crescent Cannon Pistol has a Primary Fire that sends out a standard crescent bolt, while the Secondary Fire generates an extremely potent wave of energy that will devastate any foes caught in its arc when it has finished its charging cycle.

The reprogramming of Elachi drones did not stop at the need for new ground combat capabilities. A huge stockpile of the small spider-like drones known as Skitterers have been rewired to act as non-combat companions for captains seeking a more exotic “pet.” These vanity pets can be purchased in a pack which will randomly reward one of the six (6) different chassis types that are available.