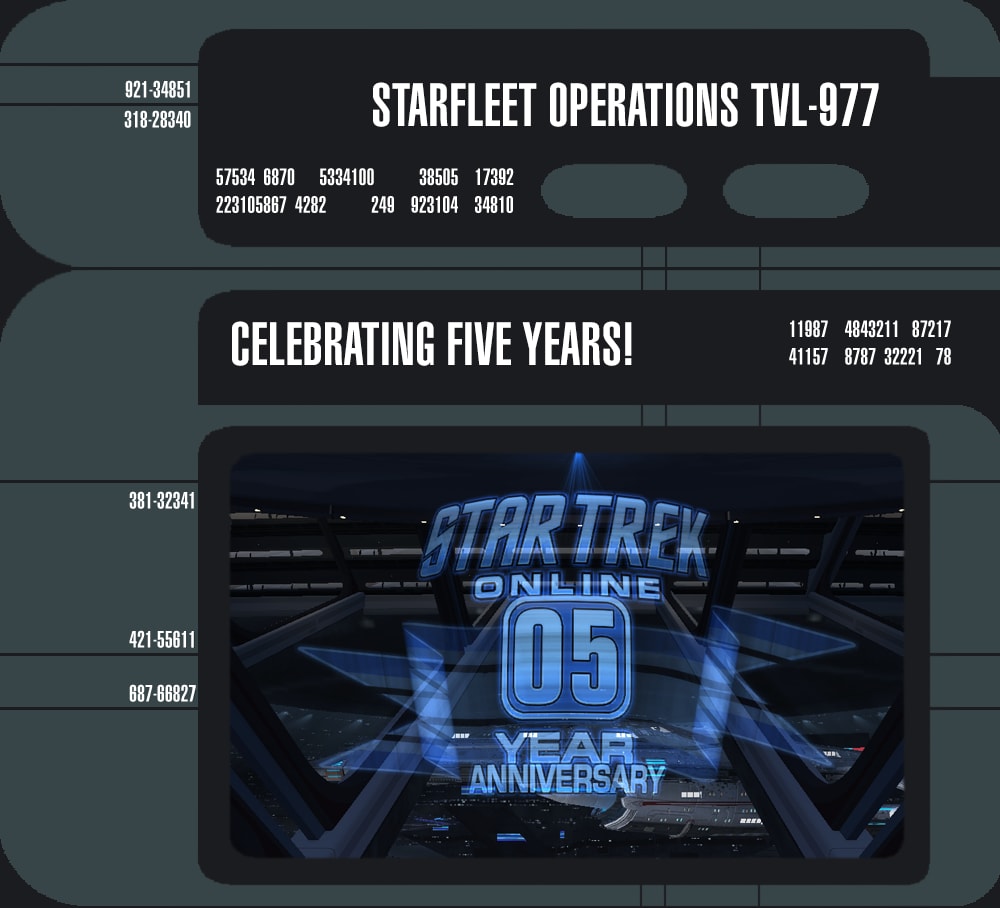 I'm unbelievably proud and humbled to announce that Star Trek Online has just shipped its five year anniversary celebration. This amazing journey wouldn't have been possible without the fantastic, dedicated, and collaborative community we have, as well as a significant amount of work from the development team over the years.

The growth and success STO has realized over this span is an incredibly rare achievement, and we're excited to share it with everyone in the community and the development team that made this possible. In addition to our annual anniversary event, I'm excited to present the additional breadth of features this release involves.

We've put together a feature-rich update that introduces exciting content and an expansion of existing systems that should make the game more fun and more player friendly. Our 5th-year anniversary episode features Garrett Wang and Kim Rhodes and closes out a story started in a Star Trek: Voyager episode and continued in Delta Rising. We added a new anniversary event that has players pitting their wits against Q in a race to stabilize Omega particles he has released throughout the quadrant.

Our content team remastered the Romulan Federation arc, adding four new episodes and tying the story more closely to the Romulan featured series and the events of Legacy of Romulus. A brand new primary specialization - Command, will now offer players a choice of how to customize their primary tree and add yet another layer to the Specialization system. Along with the new Specialization, a full suite of Command ground and space bridge officer powers add another layer of depth to our ground and space combat.

In addition, we have completely overhauled the bridge officer training system in a way that will fundamentally change and improve the way players utilize their bridge officers. We have implemented a new system into the Foundry that will show a random assortment of the top-rated Foundry missions for every Foundry-enabled starting system in every sector, making the best Foundry content instantly visible to anyone flying through sector space. Last and certainly not least, nearly every player power icon in the game has been remade in a new art style in order to improve readability and aesthetics.

This release is only the latest addition to Star Trek Online, and represents the first of several major release in 2015. Along with listing these brand new features, I'll be taking you on a quick trip through the last half decade to see how far STO has come.

In Legacy of Romulus, we added the Romulan Republic faction as well as fully fleshed out the Klingon Faction, each with a full faction specific tutorial and a complete episodic progression arc. Delta Rising featured not only the introduction of the Delta Quadrant itself but a level cap increase from 50-60, which was our first level cap increase since the launch year of the game. Our core team implemented "The Foundry," which allows the community to tell their own stories in the Star Trek universe and share them with friends and strangers alike. This powerful tool has added limitless options for story based gameplay and the team is constantly impressed at the quality and quantity of missions that are created.

We executed a complete revamp of ground combat that improved the overall speed and feel of combat, and also introduced a third-person shooter option to our existing combat. The Duty Officer System brought that true Trek command experience by allowing players to send the rank-and-file crew members on missions that sometimes let them come back with rewards, or sometimes with one less red shirt than you sent. We significantly improved the fleet experience by adding fleet starbases and other fleet holdings that give players a group endgame experience, fleet specific housing, and access to powerful items. We also added a true solo end game in the form of the Reputation system, where players can earn powerful gear, and the Specialization system where players can earn special abilities.

The concept of episodes was taken to the next level in the form of four featured episode series that set the quality bar for all content we've made since. In a departure from our standard episodes a new type of content in the form of adventure zones and battlezones adds a persistent level of large scale action to space and ground combat. Our launch crafting system was completely replaced with Research and Development, and we also implemented an item upgrade system that gives players total control over what items they want to create and what they want to improve. The UI was completely revamped for flow, usability, and to ensure it was as close to Star Trek canon as it could be.

This list doesn't come close to covering all of the exciting and game changing updates we've made to the game, but it definitely shows the range of features and quality improvements that represent STO after 5 years of live development.

As a team, we strive to provide the most exciting and engaging Star Trek experience every time you decide to log into the game. That has been our goal up through 2014 and will continue to be our goal in 2015 and beyond. We have a variety of features and updates planned for the coming year that will add more content, more systems, more celebrities, and more retrofitting of original content. We're dedicated to making this the definitive Trek experience and I'm glad we're on this voyage together. Live long and prosper!