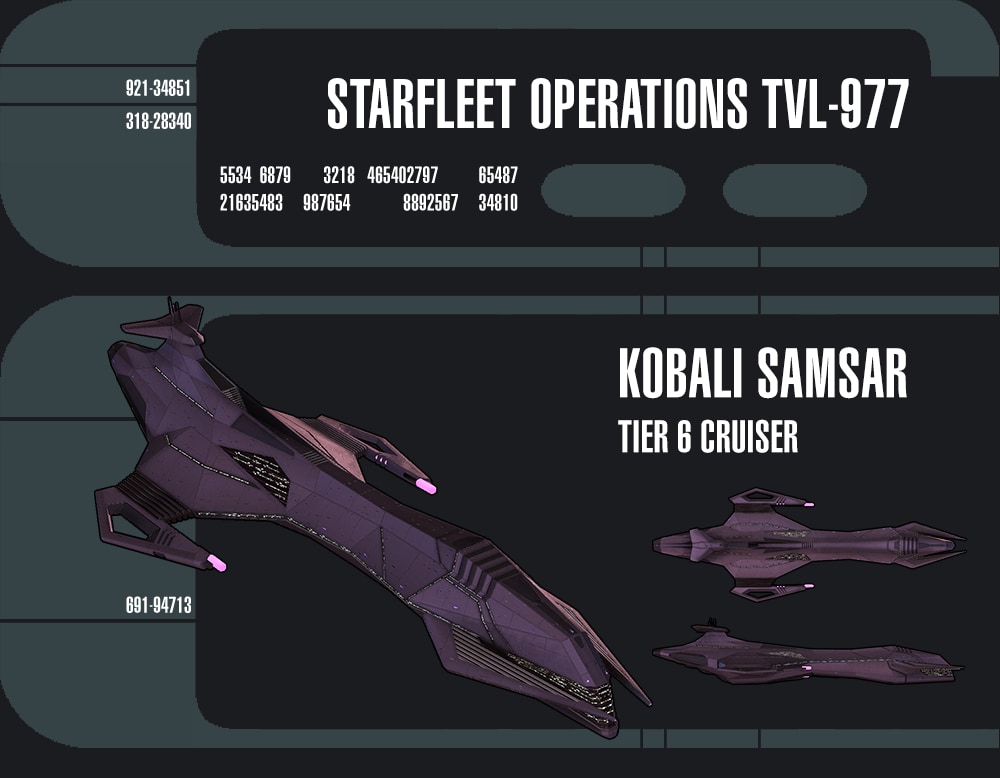 Kobali starships are known for their exceptional ability to provide support to their allies in large scale starship combat. The Samsar Cruiser is a durable Kobali Tier 6 cruiser that was outfitted to fill the role of a mobile command center.

This new starship features a universal console that can be used on any ship, a very rare Mk XII warp core that is part of the Kobali space set, a Lieutenant Commander Command/Engineering seat and a brand new starship trait!

The Kobali Samsar Cruiser comes equipped with the Regenerative Integrity Field console. When activated it provides a large hull heal that improves in strength as health decreases. In addition, it causes all outgoing directed energy attacks to heal your starship for the amount of damage dealt. This console also provides a passive bonus to hull healing.

This Console Mod can be equipped in any console slot. It may be equipped on any starship. You may only equip one of these mods.

The Kobali Samsar Cruiser comes equipped with a special Kobali Field Stabilizing Warp Core Mk XII. This warp core cannot be equipped on Warbirds. However, Romulan players that open the Kobali Samsar Cruiser’s reward pack will also receive a Kobali Field Stabilizing Singularity Core Mk XII (Very Rare). Below are descriptions for each of these items. These Warp Cores are also part of the Kobali Regenerative Circuitry. This set will be revealed in the Anniversary Episode Rewards.

This Warp Core cannot be equipped on Warbirds.

Field Stabilizing Singularity Cores increase Shield power level by +5 to +15, based on your Singularity charge level.

This Warp Core can only be equipped on Warbirds.

After achieving level 5 in your Kobali Samsar Cruiser's starship mastery, you will unlock the Emergency Response starship trait. While this trait is slotted, your hull and shield heal bridge officer abilities will have their recharge times reduced by 10% if you suffer damage while below 50% hull health. This can occur once every 4 seconds.

Q: How do I acquire Anniversary Q-mendations?

A: There are two ways to gain Anniversary Q-mendations:

Q: Will I get a discount on my other characters if I complete the Event Reputation project for the Kobali Cruiser?

A: Yes. It will be reduced to only require 40 Anniversary Q-mendations on your other characters.

Q: How do I get a Command Specialist Bridge Officer to slot into this ship?

NOTE: The above stats are subject to change.