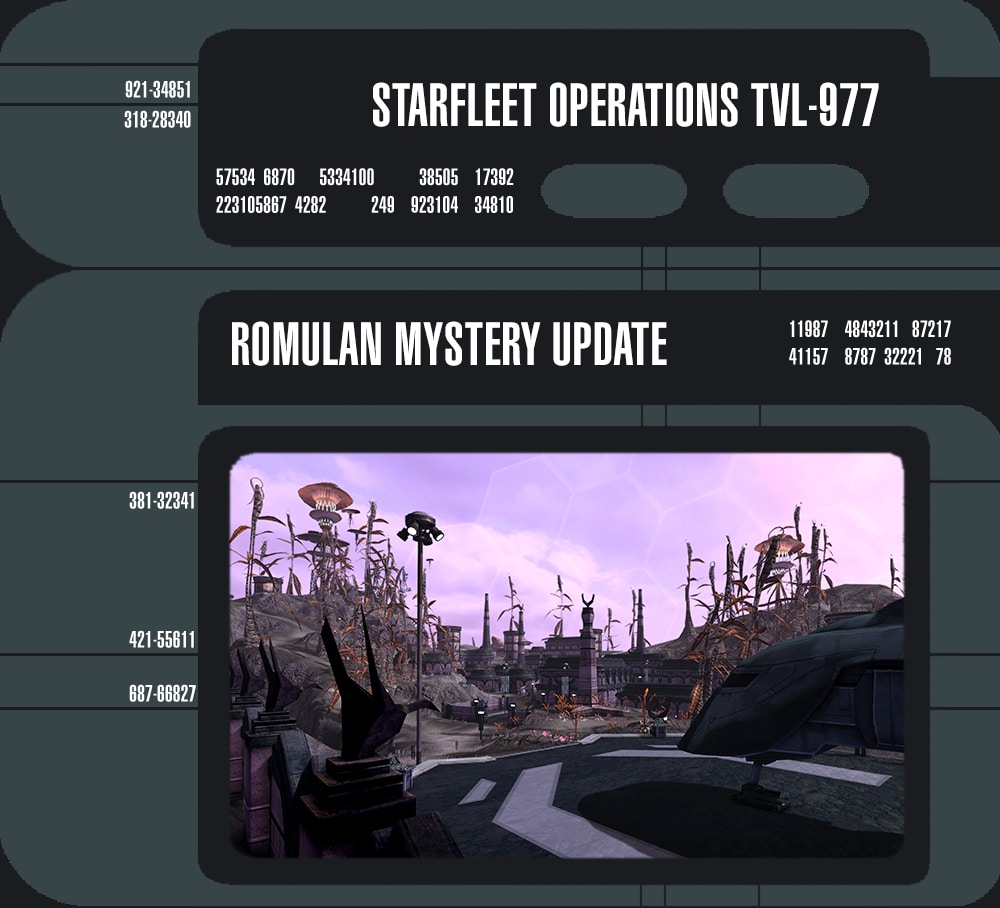 As part of our ongoing to commitment to deliver high quality content to our customers, we have reworked the Romulan Mystery series for Federation players. This content was originally developed for launch, and over the course of the past five years a lot of things have changed in our game. Not the least of which was the role of the Romulans: when we created this content, there was not yet a Romulan Republic, or a playable Romulan faction for that matter.

Updating the Romulan Mystery content became an opportunity to weave the story together more tightly. During this series, Federation players will get to visit locations from the Romulan faction series, and to play in existing locations from a different perspective. In other cases the player will experience familiar environments from the old series in new and interesting ways.

The Romulan Featured Episode portion of the series, beginning with The Vault and ending with the Darkness Before the Dawn, remains unchanged. But the other fourteen episodes have been distilled down into four episodes, completely reworked to flow more neatly together and lead into the Featured Episode series.

Across the whole series, we added voice acting, most notably the voice talent of Denise Crosby, reprising her role as Empress Sela from Star Trek: The Next Generation. We have also updated all the episodes and improved pacing and flow overall.

“Empress Sela”: This brand new mission features the voice talent of Denise Crosby as Empress Sela. Sela has invited the player to a diplomatic conference on Agrama. Knowing Sela she has a few surprises in store. The end of this episode is an epic surprise you won’t want to miss!

“Desperate Measures”: We combined “By Any Means” and “S'harien's Swords” into one mission, and threw in a visit to a location previously seen only in the Romulan faction missions. The Romulan Empire is conducting experiments on Borg technology delivered to them by the Hirogen. They must be stopped at any costs.

“Shadow Play”: This brand new episode takes the player to an updated Cirini Prime, Virinat, and ties in closely with the Romulan faction featured series. We introduce the Elachi to the Federation Player, and reveal the sinister actions of the Romulan Empire.

“Taris”: This mission combined the story elements of “Ground Zero” with “Taris”, and was overhauled to take into account the events of “Revelation”, the Romulan faction mission where Taris is apprehended by the player. This mission still reveals the secrets of the destruction of Hobus, and it received an updated and beautified ground map for Iconia.

Rewards for each of these missions have been updated as well. These are brand new missions so you will be able to earn the first-time completion reward even if you’ve completed the previous versions in the past.

You can easily access these missions by accessing your Mission Journal (default key ‘J’), selecting the “Romulan Mystery” episodes tab, and choosing to ‘Hail’ your contact for the mission. This way you can experience all of the new content! Be sure to try them out!

See you in-game for the release of the Fifth Anniversary Update!