FROM:
Fleet Admiral Jorel Quinn
Starfleet Command
TO: All Starship and Station Commanders

This memorandum is to inform you of updates to the Starfleet Uniform Code Subsection 1 effective Stardate 87003.

As the political realities throughout Federation space continue to shift, Starfleet must remain a force for consistency and stability. To that end, the admiralty is enacting a fleet-wide update and standardization of the Starfleet duty uniform. Starfleet has officially and totally adopted the uniform designated “Odyssey”, which has already seen initial deployment by personnel on Earth Spacedock in Sector 001 and in several fleet command starbases across the quadrant.

The Odyssey uniform design provides a solid link to Starfleet’s heritage while establishing a bold direction for its future.

Attached to this message are replicator patterns for the Odyssey uniform. We have authorized all starship and station commanders to begin replication and distribution of this uniform among their crews effective immediately. Please also see the attached uniform specifications on appropriate accessories, coloration and wear.

NOTE: Subsection 2, Paragraph 1 of the Starfleet Uniform Code remains in effect; Starship captains continue to have discretion as to their personal uniform and the uniforms of their bridge crew. 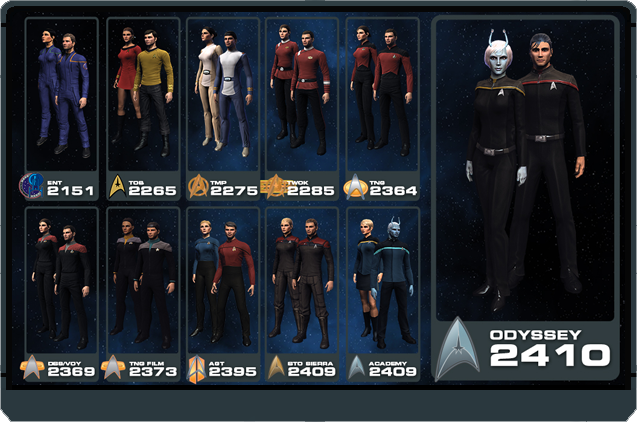 When we opened the renovated Earth Spacedock and turned the clock over to 2410 with the launch of Season 9, we standardized the uniforms worn by officers on ESD to be the Odyssey “Fleet” uniforms. This was the first step of a much larger effort: to update the look and improve the consistency of Starfleet characters in Star Trek Online. Ever since launch, Starfleet characters in STO have worn a wide variety of outfits in a variety of colors. This showcased the impressive customization of the game but also detracted from the immersion into the Star Trek universe. Starfleet as an organization felt disorganized and the uniforms did not match the futuristic military aesthetic of the more recent Star Trek television shows.

When Season 9 launched and 2410 finally arrived it was the perfect opportunity to implement a change in the uniforms worn by Starfleet personnel. Long-time fans of Star Trek will understand that new milestones in a show or movie are often marked with a change in the uniform the characters wear and it felt appropriate that Star Trek Online honor that tradition. We also felt that we already had the perfect candidate to replace the existing uniforms with a new standard: the Odyssey uniform earned through progression in the fleet system.

Based on the 2409 Starfleet Academy uniform, the Odyssey uniform was designed to be more in line with the styling of the uniforms seen in The Next Generation, Deep Space Nine and Voyager. It features clean lines and a relatively simple pattern. Gray shoulders hearken back to DS9 and Voyager while the bold stripe across the chest pays homage to the alternate future uniforms seen in TNG’s “All Good Things” and VOY’s “Endgame”. With all this in mind it was the perfect fit to give Starfleet characters in Star Trek Online a fashion update and unify the look of the Federation’s forces.

While we have recently completed the task of updating all of the Starfleet characters to use the Odyssey uniform, players can still choose how they wish their captains and bridge officers to be dressed. Given this choice, we knew that some of you would want to match the new Starfleet standard, and to make that easier with Season 9.5 we are making changes to how players access the Odyssey uniform. When season 9.5 launches: 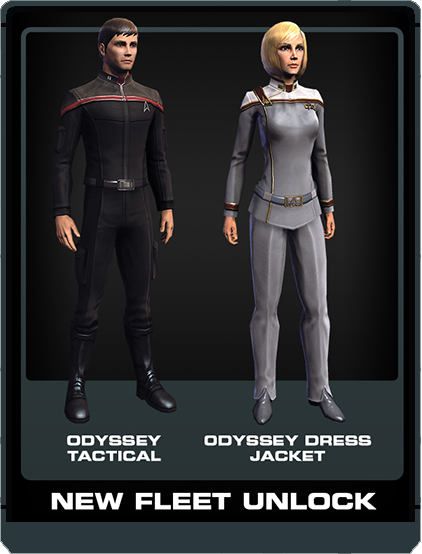 Here are the two new Odyssey uniform sets. One is dubbed the “Odyssey Tactical” uniform, sporting a more rugged, padded jacket and pants with cargo pockets in the sleeves and thighs, knee-high boots, a new belt and the Odyssey combadge. The second is a dress uniform version of the Odyssey jacket, featuring a longer cut and a flap reminiscent of the uniforms from The Wrath of Khan. This jacket also includes a unique belt and combadge.

While modernizing the uniforms available to Starfleet captains we felt it was also appropriate to do the same for the Klingon Defense Force. We decided not to update Klingon uniforms across the board as the KDF is more decentralized than Starfleet, but we did want to make sure Klingon captains could still sport their flagship uniform if they so choose.

To that end, we have also made changes to the Bortasqu’ uniform unlocks: 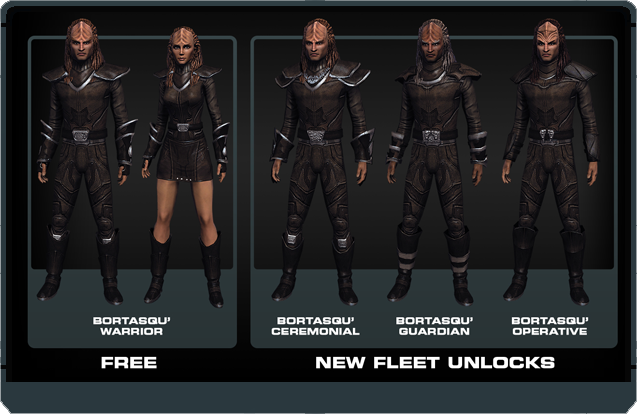 In addition to the Odyssey and Bortasqu' uniforms available to the Federation and KDF, Romulans may purchase Bridge-Officer Only versions of the new Costume Unlocks for a lesser price, specific to their ally's faction.

Finally, Captains who have visited Admiral Quinn on Earth Spacedock might have noticed he’s wearing a long coat version of the Odyssey uniform. While making these other changes we wanted to make this uniform piece available to players as well and felt it would be a good compliment to the existing 200 day Veteran’s costume pieces. 200-day Klingon players will get a Bortasqu’ long coat and sash. Existing 200 day veteran unlocks will remain unaffected. 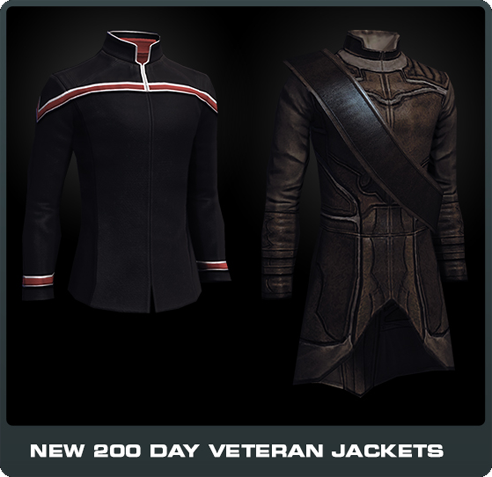 If you’d like to have your crew match the new Starfleet standard, here are some reference images to use while at the tailor. 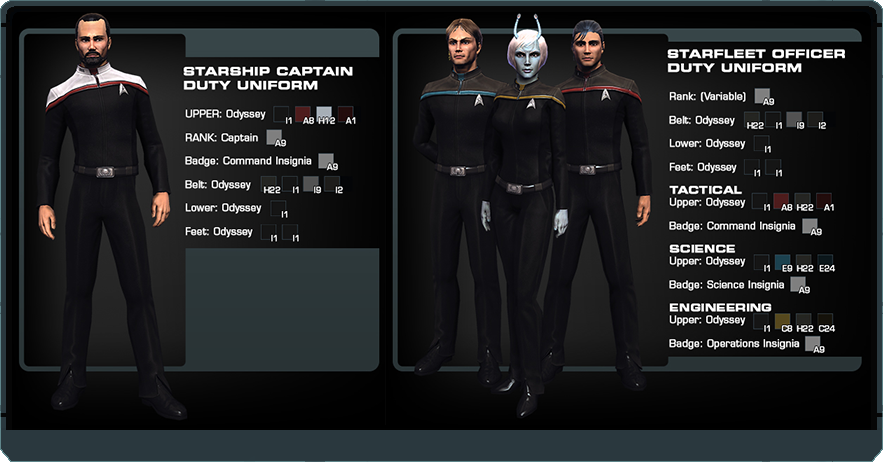 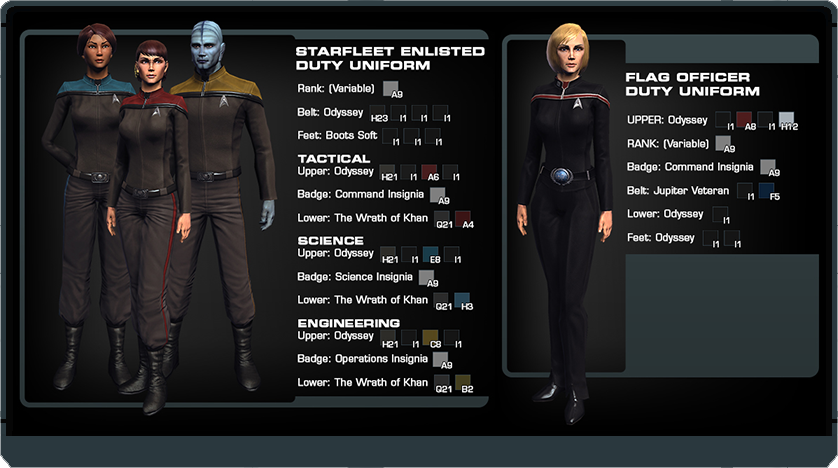