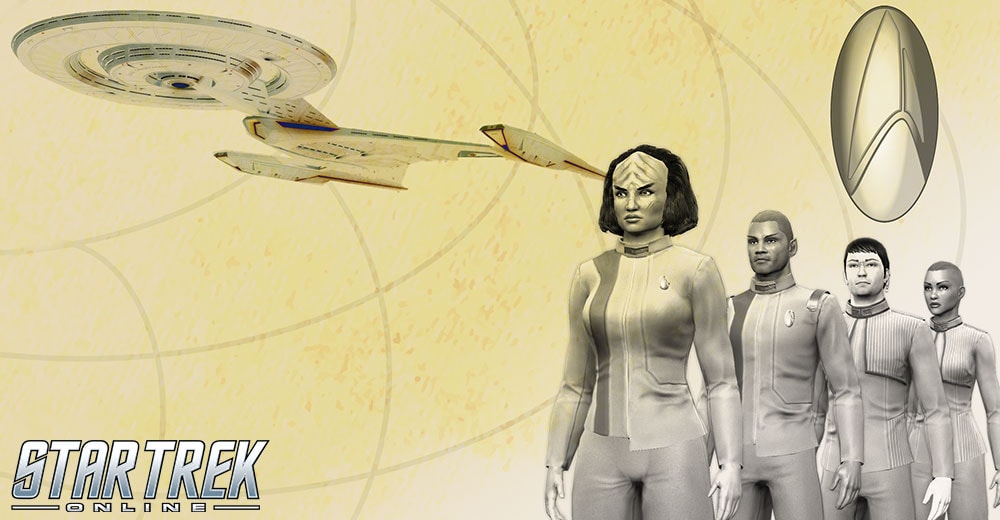 Living through collapse is just living, in the end. It becomes a part of life. When the Burn came upon the galaxy, for most people it was a distant, incomprehensibly vast problem. The news got scary, goods became scarce, but the long slow slide was hard to appreciate from the ground. Life went on even as society slipped into pieces. People began to rediscover common ground when a traveler told a forgotten truth: better things are possible. Hope’s funny that way. Everyone agrees which way is up, at the bottom of the barrel.

Star Trek understands this better than perhaps any other science fiction. There is no shortage of dystopian vision, but breaking things is easy. It’s putting them back together again that’s hard. Unity only endures when it gathers around principles and ideals rather than individuals, and there are few better than the guiding principles on which Starfleet is based. Those truths were forged on Earth as it burned in the Eugenics Wars. It fell, but it picked itself up and it did better. It is human nature—no matter the fall, we will find a way up again.

The Lobi Consortium is of course deeply disturbed by rumors of the collapse of interstellar trade in its future, but it does not put much stock in such reports. Proper hedging prevents any sort of actual consequence, surely there must be some mistake! The risk is already priced into the market. Besides, what matters now is now – the future is someone else’s problem but it’s your opportunity! The finest in temporally-displaced technology from the 32nd century is fresh on the market, so fresh it hasn’t even been built yet. Reserve yours today!

Captains opening the Discovery: Far From Home Lock Box may find themselves fortunate enough to win the Crossfield Science Spearhead Refit [T6].  Detached nacelles, programmable matter interfaces, improved central processor, nanogel circuitry, a state-of-the-art cloaking device, and much more – this upgraded refit of the original Crossfield-class has been given the makeover of the millennia, and is prepared to defend the Federation and its allies in any time period. True to its original lineage, the refit retains a measure of versatility and durability that places it among the best that the fleet has to offer when it comes to approaching the unknown with a sense of wonder, rather than fear.

A new Starship Trait is also available: Programmable Matter Enhancements. Activating a non-specialization Bridge Officer Ability has a chance to provide a bonus, with the specific bonus being based on what profession the Ability was. Engineering provides Temporary Health, Tactical provides increased Damage, and Science cleanses a Control or Debuff effect (Control first).

The Discovery: Beyond the Burn Lock Box also has new Space and Ground weapons inside the 32c Phaser Weapons Pack, two sets of each – one representing mainline technology, the other representing modifications and refits. 32nd Century Starfleet technology makes incredibly efficient use of resources, providing similar stopping power but at less strain to the gear. Captains can take advantage of this excess energy to rapidly recover the recharge times of their Bridge Officer Abilities and Kit Modules, for space and ground weapons respectively. Refit and field-modified weapons provide more recharge up-front, but less in total; standard 32nd Century weapons provide the most recharge, but do so over time. Rarely, weapon packs contain the 32c Refit Vanity Shield, providing the aesthetics of the Crossfield Science Spearhead Refit to a ship that equips it in its vanity shield slot.

Captains may also acquire Discovery: Beyond the Burn Kit Module packs, each of which contains one of five new Kit Modules. They are all universal, and can be used by any class.

Throws a seed of Parasitic Ice wrapped around a powerful catalyst that Holds the targeted Foe and deals Cold Damage Over Time. The Ice spreads to nearby Foes, and from them to more Foes, though each instance of the Ice fades when the original application runs out of duration.

Deploys a DOT-23 drone with an Engineering specialty. All professions can use all DOT-23 drones, but only one DOT-23 may be equipped at a time. All DOT-23s attack with a basic phaser weapon, and have a special ability based on their specialty that is triggered by the Captain’s Module usage. The Engineering DOT-23 drone supercharges deployed pets – any time the Captain uses a Kit Module that creates a pet, all pets become charged with electricity for a period of time, dealing Electrical damage to the nearest Foe each second.

Deploys a DOT-23 drone with a Science specialty. All professions can use all DOT-23 drones, but only one DOT-23 may be equipped at a time. All DOT-23s attack with a basic phaser weapon, and have a special ability based on their specialty that is triggered by the Captain’s Module usage. The Science DOT-23 drone scans Foes – any time the Captain uses a Kit Module that Controls a Foe, the DOT-23 scans it, reducing its Damage Resistance Rating for a period of time.

Deploys a DOT-23 drone with a Tactical specialty. All professions can use all DOT-23 drones, but only one DOT-23 may be equipped at a time. All DOT-23s attack with a basic phaser weapon, and have a special ability based on their specialty that is triggered by the Captain’s Module usage. The Tactical DOT-23 drone attacks with a heavy Phaser weapon – any time the Captain uses a Kit Module that buffs a Captain or Bridge Officer, the DOT-23 attacks with a much more powerful weapon for a period of time.

Instantly beams the Captain out of harm’s way. A reticle then appears, which can be freely repositioned; when the Kit Module is reactivated, the Captain beams back in at the chosen destination and facing.

New Captain’s Traits are also available within the Discovery: Beyond the Burn Lock Box. They are universal and available to all species.

An Active Ground Trait that allows the player to form a Bond with target Foe Animal below 50% Health. Once a Bond has been formed with that species, it becomes permanently available to use as a pet by using Bond With Life on a non-Animal Foe (or an already-bonded Animal species). Doing so deploys your currently selected pet to assist you in combat. Lastly, using Bond With Life on any friendly target opens a Contact that allows you to select which pet to use. The more Animals a Captain Bonds with, the more powerful all such pets become. Boss animals are immune.

Using a Revive power such as CPR applies a significant temporary Health shield and Bonus Damage to the target and to yourself for a period of time.

Improves Kit Performance upon defeating a Foe, up to a high cap. Lasts until being defeated yourself or until changing maps.

Space: Feel the Weight of Our Presence

Each friendly Ally on the map debuffs Damage Resistance Rating of nearby Foes, stacking up to 25 Allies. Mines and Torpedos don't count, but Hangar Pets, Distress Beacons, Turrets, and all other forms of Allies do.

A Saurian Science Officer Lieutenant by the name of Schroeder who frequently experiences difficulty with the transporter system is available to be recruited. While he is assigned to Active Ground Duty, activating a Kit Module carries a chance that he will beam down to the surface to provide accidental assistance in the form of Science Bridge Officer Abilities: Hyperonic Radiation, Tachyon Harmonic, and Exothermic Induction Field.

There are many other prizes within the Discovery: Far From Home Lock Box for players to acquire, such as the Crossfield Science Spearhead Refit Vanity Shield, R&D Packs, Boosts, and other assorted items.

This unusual energy weapon can project a great deal of Electrical damage to Foes. Its primary fire builds a chain, bouncing to an additional target each time the same primary target is attacked repeatedly, up to four additional bounces. Its secondary fire zaps and pushes away all Foes in a cone. Its tertiary attack is a self-contained staff melee attack combo. 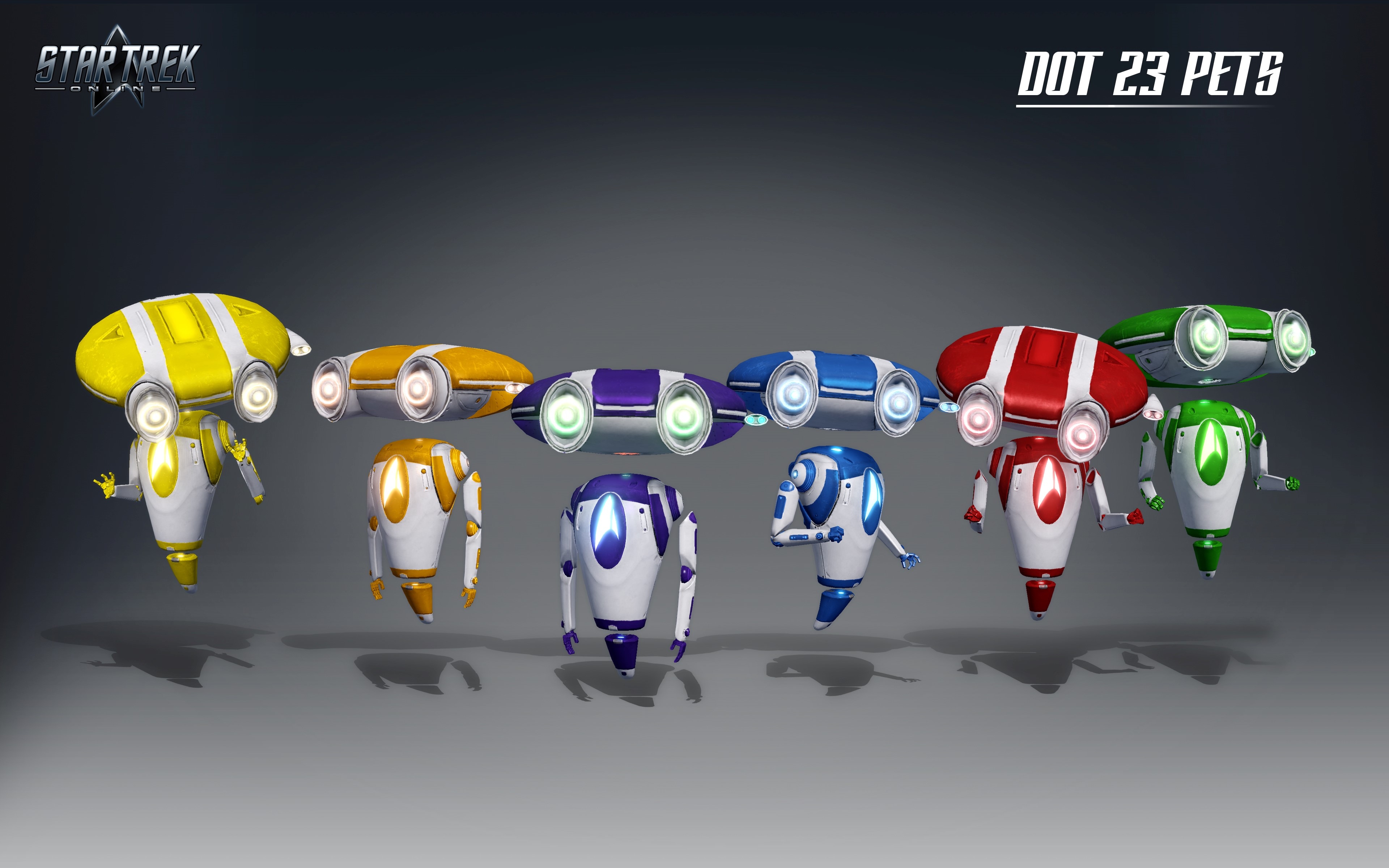 Unsuitable for combat, these little drones make lovely travelling companions. They come in a great many colors. 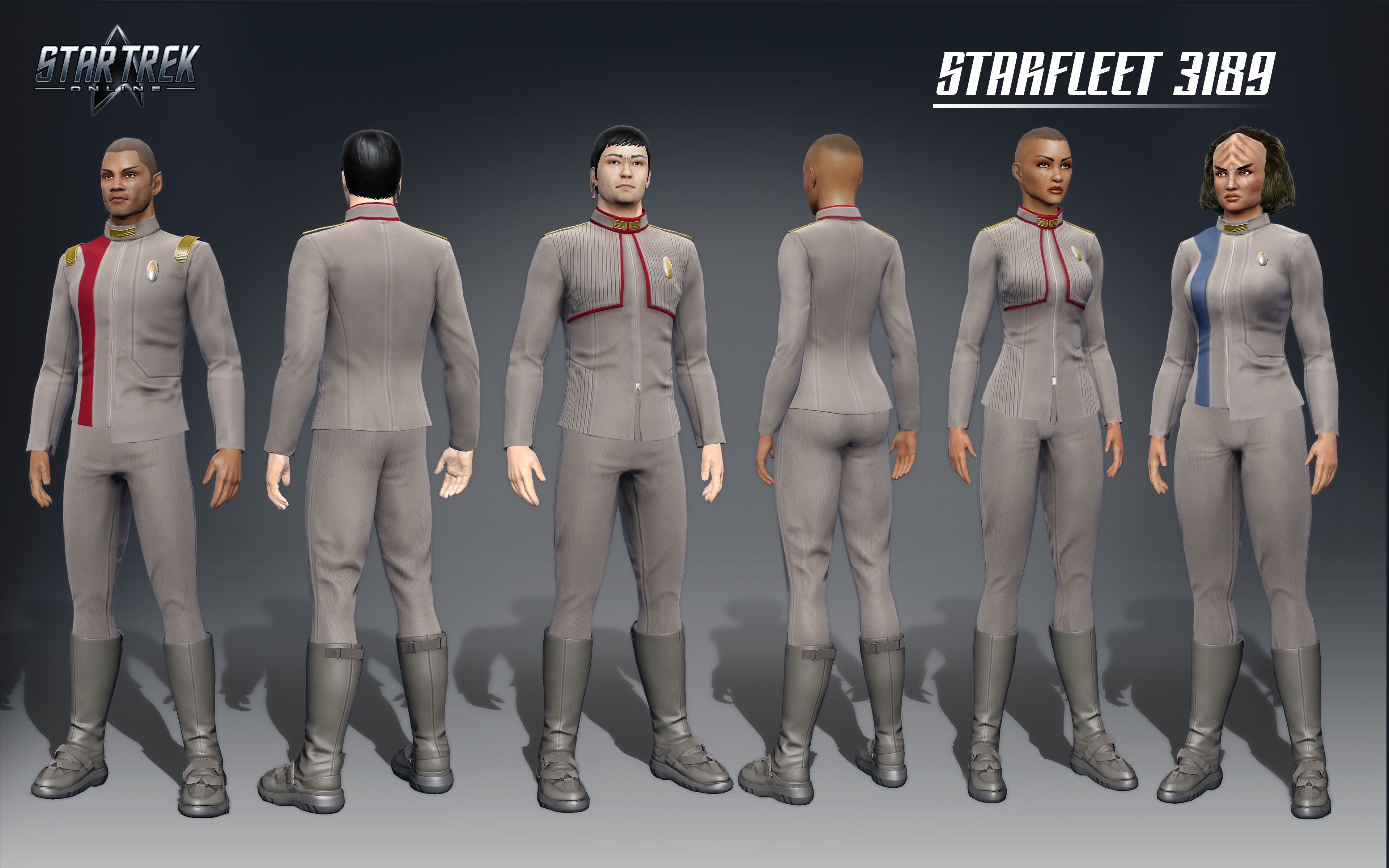 This crisp and literally postmodern look represents the Federation in the 32nd Century.