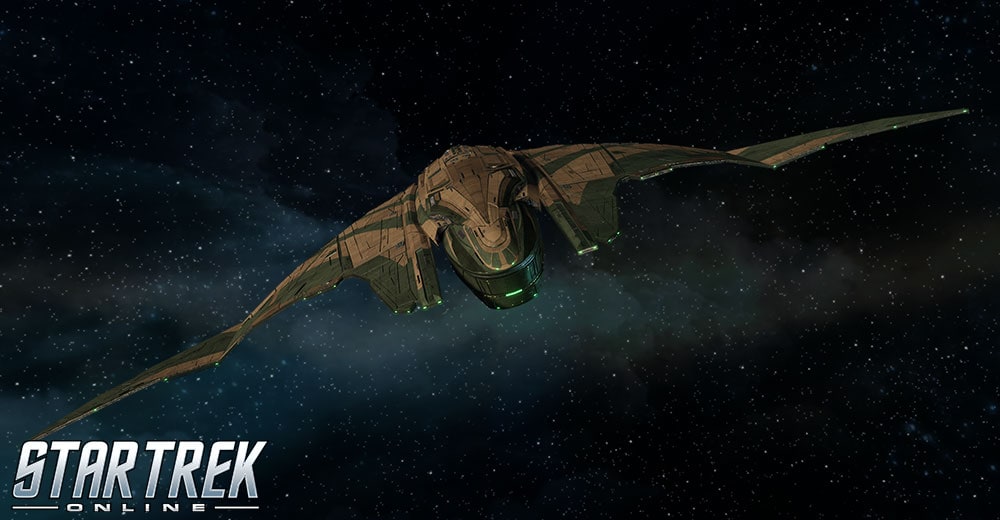 The Lobi Crystal Consortium is pleased to announce that it has acquired a starship from a recently disgraced section of double secret Romulan Intelligence, the Zhat Vash’s Dhailkhina Command Strike Wing Warbird. This powerful strike vessel was built to the highest standards in the secretes shipyards, only recently seeing the light of day. And now, this starship can be yours!

The Dhailkhina Command Strike Wing Warbird [T6] will be available within the Picard Lockbox, coming soon to Star Trek Online! This new starship can be used as soon as you’ve completed the tutorial, and will scale with you as you level up all the way to max level!

For the details on this ship, read on!

The Dhailkhina was built to be the command vessel of a fleet intended to protect all biological life from the threat of annihilation. With the Romulan’s typical strike first mentality in mind, it features a powerful Battle Cloaking device to get the jump on its targets, an aggressive weapons layout, a hangar bay of strike craft well suited for recon or fighting, and impressive team coordination abilities. Should it ever engage in battle, there’s little question as to who would come out on top.

The Carbon Scorcher deals physical damage to its target. Additionally, the impact leaves behind a molecular solvent that eats through inorganic material, dealing heavy physical damage over time and decreasing the damage resistance rating of the target.

While this trait is slotted, activating any Command or Singularity ability will summon a micro singularity at your current target for several seconds, dealing kinetic damage and pulling foes inwards. If you do not have a foe targeted, it will instead appear 5km in front of you. This can only occur once per several seconds.

The Zhat Vash developed the Snakehead fighters to aid their larger starships in battle. These fighters are extremely nimble and use their Zhat Vash weaponry to destructive effect.

Owning the Dhailkhina Command Strike Wing Warbird will unlock purchase of these new fighter pets. These fighter pets may be equipped on any other starship you own that has a hangar bay. The Dhailkhina comes equipped with one hangar of Snakeheads, and additional may be purchased from the EC Store, with Advanced and Elite versions available through the Dilithium and Fleet vendors, respectively.

NOTE: The above stats and details are subject to change.