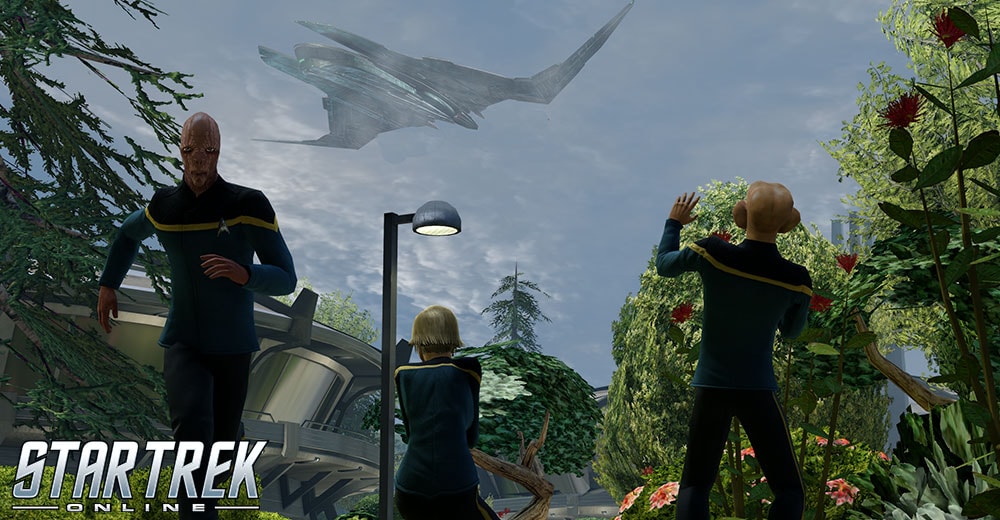 As the Star Trek franchise enters its 55th year, we are witnessing a renaissance of the universe it presents to us, with new and continuing modern shows continuing to air, each exploring more and more strange new worlds, and occasionally giving us a look at the continuing missions of characters that we fans may consider something akin to old friends. The Lock Box that will be releasing alongside Star Trek Online’s 11th Anniversary celebrates just one such mission, by pulling inspiration from the technology and stories seen during the adventures of the retired Admiral Jean-Luc Picard and the eclectic collection of characters found aboard La Sirena.

Star Trek Online has had something of a tradition for tying up loose ends show on-screen, and contains numerous missions that follow on the heels of unfinished stories we saw during the televised episodes. To witness the canon universe doing the same during the course of Star Trek: Picard’s first season was a treat, and further evidence of the endless stories of this beloved franchise has to offer, if we are only bold enough to go in search of them.

Opening a Picard Zhat Vash Lock Box requires the use of a Master Key, which may be purchased from the Zen Store for 125 Zen apiece, or in a 10-pack for 1125 Zen. Each box that is opened will contain one of the following prizes:

The aggressive posture of this flagship of the Zhat Vash fleet seems custom made to appear threatening, even while powered down and stationary. Commanded on-screen by the turncoat agent Commodore Oh, this impressive and agile ship can be flown by captains of any allegiance, and boasts a full suite of Command Specialization abilities, Singularity abilities, and one hangar bay pre-equipped with brand new Snakehead Squadron Fighters, found only aboard this ship.

Complete details on this vessel will be published in a separate dev blog. Stay tuned!

One Impossible Thing at a Time

When you activate any Captain Ability, you and all teammates will receive an immediate reduction to Captain Ability Recharge Times. Each player affected by this may only benefit from the reduction once every 5 seconds.

(Does not affect the ability used to trigger the effect, nor abilities that reduce cooldowns such as Tactical Initiative.)

Close-range attacks will occasionally trigger a spray of toxic damage in a short-ranged cone. Additionally, after being defeated in battle you will spray the area around your body with additional toxic damage.

Issue an ultimatum to a group of chosen foes: Either they will be unwilling to fight you, or they will suffer a severe debuff against resisting damage dealt by Melee Attacks. It is their choice, if they wish to live, or not.

Starting at 75% Hull, you will gain increasing bonuses to Flight Speed, Turn Rate, and Defense Rating as your Hull continues to fall lower and lower, maxing out when you are at 25% Hull. This bonus is recalculated every 0.5 sec.

You are just paranoid enough to protect yourself from surprise engagements, whether they be from confused allies unable to tell friend from foe, or from sudden ambushes of decloaking or surprise enemies that initiate combat while already in close proximity.

Each of the following Kit Modules are Universal, and gold quality. When received, they will be of a Mark appropriate to your level, and may be upgraded by the usual methods.

(Damage and other numeric values scale with level and mark)

By applying this complex scanning technology to the battlefield, you will be able to weaken the shield resilience and damage resistance of all foes that pass within its bounds. Additionally, foes defeated within its bounds have a chance of creating valuable intelligence bundles in the form of combat buffs that you and your teammates may walk over to pick up, and which can enhance a wide range of combat capabilities.

Release multiple self-propelled explosive devices in the target's vicinity. Each will detonate on impact, causing explosive damage and reducing the effectiveness of armor. The volatile solvent within the device also lingers for several seconds, continuing to break down molecular bonds of non-organic material in the affected area.

Activate to undertake a sudden jump through local space. This will instantly move you in the direction of whatever you currently have targeted. If nothing is targeted, you move instead straight forward in the direction currently you are currently facing.

Collect this set of Duty Officer Assignment items, and send your most trustworthy and capable crewmen to continue investigating matters that have been abandoned for years. The Zhat Vash is believed to be a defunct organization in the modern era, leaving these dangling investigations ripe for exploration by the brave and curious alike.

Each assignment offers a hefty payout of Skill Points and Dilithium Ore upon completion.

Completing all five of the Duty Officer Assignments with a Success outcome will allow you to claim a bundle of Dilithium Ore and the Title “Zhat Vash Investigator” from the Lobi Store for free.

Completing them all with an outcome of Critical Success will also provide an even larger Dilithium Ore bundle, as well as the Title “Zhat Vash Operative” from the Lobi Store.

Opening this pack presents you with a choice between Zhat Vash Disruptor Beams or Zhat Vash Disruptor Cannons. Zhat Vash Disruptor weapons have a chance of applying "Viridium Isotope" to any target they hit. The damage they deal will be increased for each stack of this effect that is present on the targeted foe, regardless of the source of the effect. This replaces the standard Disruptor effect. All weapons contained within these crates are of Very Rare quality, and contain the special passive mentioned previously, in addition to other random modifiers.

The available weapon types contained in Zhat Vash Weapon Packs include the following:

Each Zhat Vash Weapon Pack also has a small chance of containing a Zhat Vash Vanity Shield, which may be equipped in the visual slot of your starship to apply a new hull material style.

Interspersed with the thematic prizes listed above, players may find themselves instead winning valuable boost items that can increase the rate at which their characters earn many valuable numerics and currencies. This list has been trimmed from the offerings found in previous Lock Boxes, and now only contains the following options:

Also Free in Every Box:  The Impossible Device

Alongside the previously-listed prizes that a player may receive by opening any Picard Zhat Vash Lock Box, every one opened will include a one-charge consumable device, called an Impossible Device. Although the exact inner workings of this impressive gizmo are not fully understood, its effectiveness cannot be denied.

This device may be used on any player character who currently sports one or more injuries, whether they be personal (ground) or on their starship (space), so long as they are not currently in combat. Using the device will immediately remove one injury from the target at random. If used on a character other than yourself, the player will also be rewarded with a stacking boost to Hitpoints/Hull and Outgoing Healing. This buff will last 30minutes, stacks 10 times, and is not removed by defeat or changing maps.

To coincide with the release of the Picard Zhat Vash Lock Box, the following new items are being added to the Lobi Crystal Store:

Romulan spec-ops forces have long been known for secrecy beyond what many other species might call reasonable, and the Zhat Vash take this to the extreme. The body armor issued to their infiltration teams is built to balance defense with high mobility, and comes with adaptive systems built to withstand close-up encounters, while attempting to give the equipped agent an edge. If overwhelmed, the armor also enables the ability to utilize the stored-up energy of these adaptive defenses to initiate a quick disengage that also increases energy weapon damage, allowing the agent to quickly turn the tides in their favor.

In addition to standard Ground Armor resistances, this armor has a couple of special effects:

When struck by Physical or Kinetic Damage, apply “Adaptive Cushioning” for 40sec (stacks 10 times). Each stack grants all of the following:

Activate this special ability to move away from enemies.

NOTE: Purchasing this item from the Lobi Store will grant you a Tailor Unlock of the Zhat Vash Armor, allowing for customization.

The primary firing mode of this weapon fires two quick bolts of Disruptor fire at the primary target.

The basic mode of the secondary firing mode will fire extreme Disruptor damage at your current foe while also repelling them away. (Exploit Attack)

If allowed to continue charging for 6 secs after its cooldown (a total of 12 seconds), the secondary firing mode of this weapon will automatically upgrade itself to this firing mode. Watch for the telltale crackling of red energy along the barrels to know when it is ready to be released.

Charged Chamber Blast will annihilate all foes near the current target with an extremely deadly dose of Disruptor Damage and knockback. (AOE Exploit Attack)

A total of six (6) new color variant breeds may be obtained from the Lobi Store, including one genetically bred to closely resemble the personal pet of retired Admiral Jean-Luc Picard, affectionately known as “Number One.”

Which breed you get will be determined at random at time of purchase, but they may be traded with friends (or on the exchange) in order to help you collect all of these adorable canine companions.