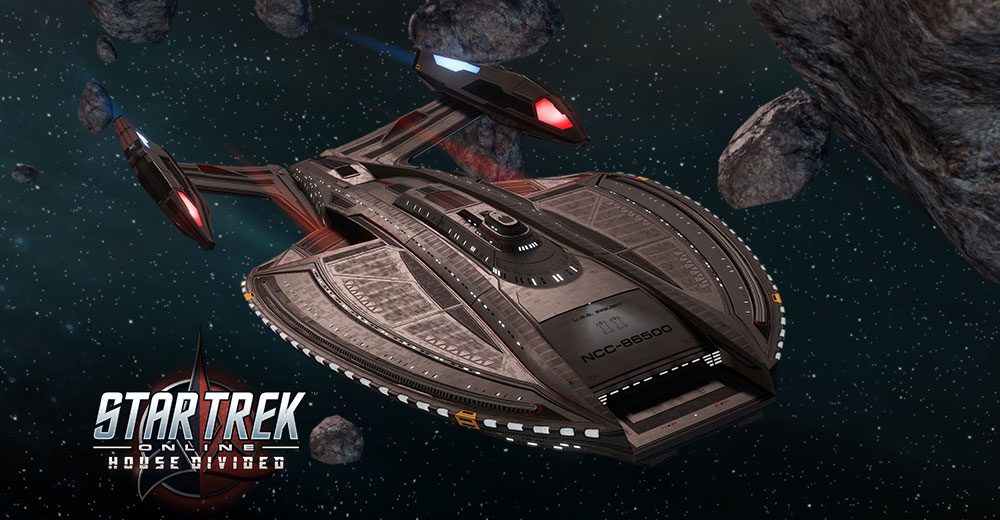 “Right now I’m on the bridge of the toughest, fastest, most powerful ship Starfleet has ever put into service. And I’ve got a fleet of them at my back.”

We are excited to announce a new addition to this Promotional Ship Pack: The Inquiry Battlecruiser! This ship first appeared in the season finale of Star Trek: Picard, as Acting Captain Riker lead a fleet of the new ships into battle.

In 2411, this ship has been reborn as the latest in the Avenger family of starships, with full compatibility with the previous ships in that line, and a brand new three-piece bonus when you equip the consoles of all three ships.

Initially coming to fame in 2399, with the actions of the USS Zheng He over the planet Coppelius, the Inquiry Class was Starfleet’s most powerful ship for many years. The initial designs and technical breakthroughs of the ship were later used as the starting point for the Avenger-class project. Engineers at Utopia Planetia felt the time was right for another update to the Avenger line, and decided to return to the classic form, and name, of the Inquiry class.

The modern Inquiry Battlecruiser, like other ships of its lineage, are aggressive ships, designed to charge into head-on confrontations and come out unscathed. To further these goals, it comes equipped with a Variable Assault Deflector Array to ensure that it can come out swinging and shrug off any retaliation. This is further tied into its Cruiser Commands, to ensure that its team is as prepared as possible to follow it in its charge. Its sturdy construction and forward-facing weapons mountings round out the package, make it an intimidating sight to be staring down at. Those on the business end of an Inquiry often find their goals rapidly aligning with the Federation’s peaceful ideals.

The Variable Assault Deflector Array, or V.A.D.A., routes a massive blast of Phaser energy directly out the ship’s main deflector dish, causing significant damage to anything in front of it. For several seconds afterwards, the forward shield facing is significantly strengthened, repairing rapidly from any damage that comes towards it. Additionally, innovations based on the Cruiser Commands present on the ship allow activation of this Deflector blast to amplify the effects of your Cruiser Command on yourself and your teammates, granting boosts based on which command is active. The Weapons System Efficiency command grants a boost to Weapons Power, the Shield Frequency Modulation command grants a boost to maximum shield strength and shield regeneration, and the Strategic Maneuvering command grants resistance to movement-impairing effects.

This console provides a passive boost to Turn Rate and Phaser Damage. This console can be equipped on any starship, in any slot. You may only equip one of these consoles.

While this trait is slotted, whenever you activate Emergency Power to Shields, you will gain a boost to Weapon Haste that scales with your Shield Power and a temporary Secondary Shielding that lasts for several seconds.

This Deadly Maneuvers Set has been updated to support a 3-piece set bonus by having all three Avenger consoles on any starship. With any two consoles equipped, your ship has increased Weapon Damage and Flight Turn Rate. With all three consoles equipped, in addition to the previous bonuses, you now gain a Flight Speed and Maximum Hull Capacity.

In addition, the Inquiry-class Battlecruiser can equip the Cloaking Device found on the Dreadnaught Cruiser and Tactical Escort Retrofit, as can the other ships of the Avenger Line.