Jayce's Navy Interstellar: Through the Valley 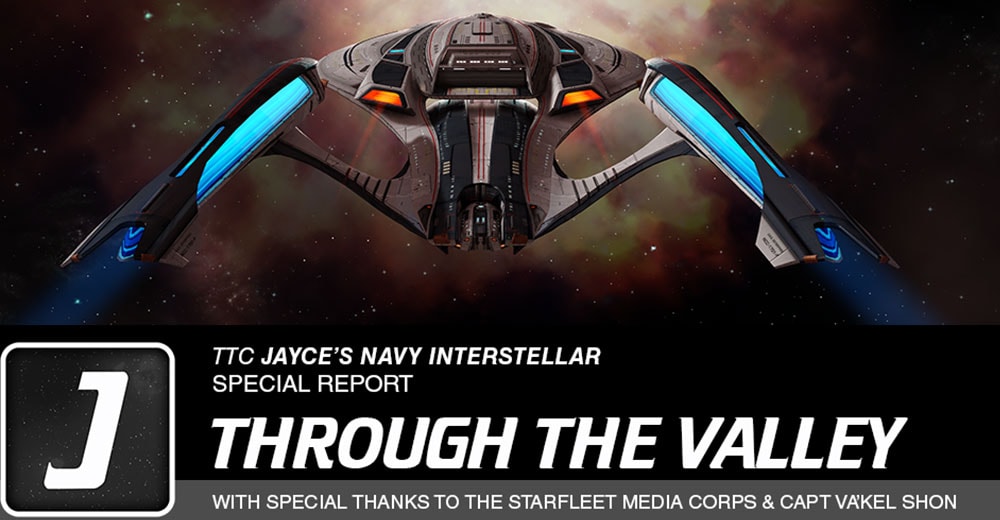 On the brink of ultimate disaster, the Iconian Wars came to an abrupt, improbable end. Billions had died across hundreds of worlds and the relentless mass of the Iconian war machine hung over Earth, ready to bring the Federation and her allies to heel. But against all odds and reason, the naive hope for peace prevailed.

The exact details of why the Iconians ended their assault are shrouded in mystery. But ultimately the details matter less than the simple fact that here we are, watching a new dawn after a long night of terrible storms. 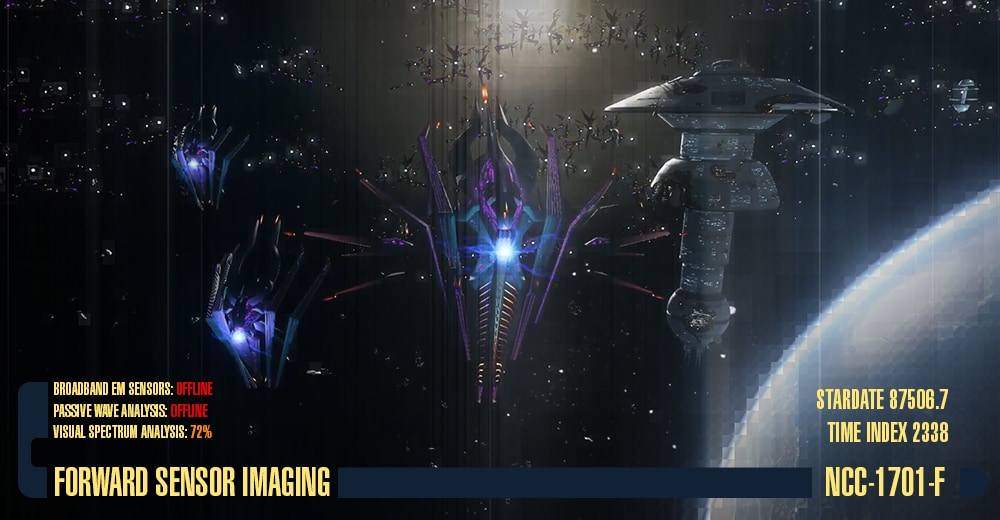 The reversal of fortune sits heavy on those that were there for the Second Battle of Earth, also called the “Battle at Midnight” - a reference to the infamous Doomsday Clock from Earth’s 20th century. That battle claimed hundreds of ships and tens of thousands of lives. The survivors, now some of the most decorated officers in Starfleet, the RRN or the KDF, have the task of leading the fledgling Alliance forward into the postwar era.

No-one is more aware of that responsibility than Starfleet Captain Va’Kel Shon, commanding officer of the U.S.S. Enterprise. “There’s an old Aenar curse,” he says as we sit down in his ready room, the  paint still drying and his personal trinkets still in boxes on the deck, “I think you have something similar on Earth: ‘May your path lead you on a memorable journey.’” 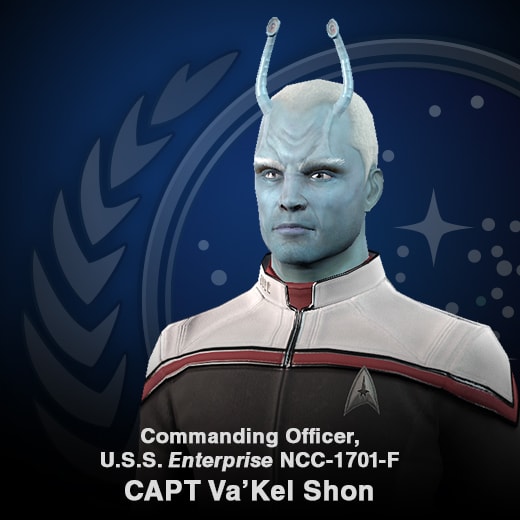 He smiles grimly and takes a sip of his lukewarm coffee, glancing sideways out the viewport as a workbee floats by, hauling twisted metal away from the ship. “Certainly we have had a ...memorable journey thus far.”

An understatement to be sure. Not quite two years old, the Enterprise has participated in action against the True Way, the Tal Shiar, the Elachi, the Undine, and the Iconians… The last of which nearly broke her.

Now she floats in Mars orbit, cocooned in drydock preparing for her post-refit shakedown cruise. “For how many engagements we’ve seen,” Shon continues, “It was the last one that almost crushed us. We lost...700 souls, the Aquarius II, our port nacelle, and our main deflector array… but she held together. On a day full of disasters and miracles, we got both.” 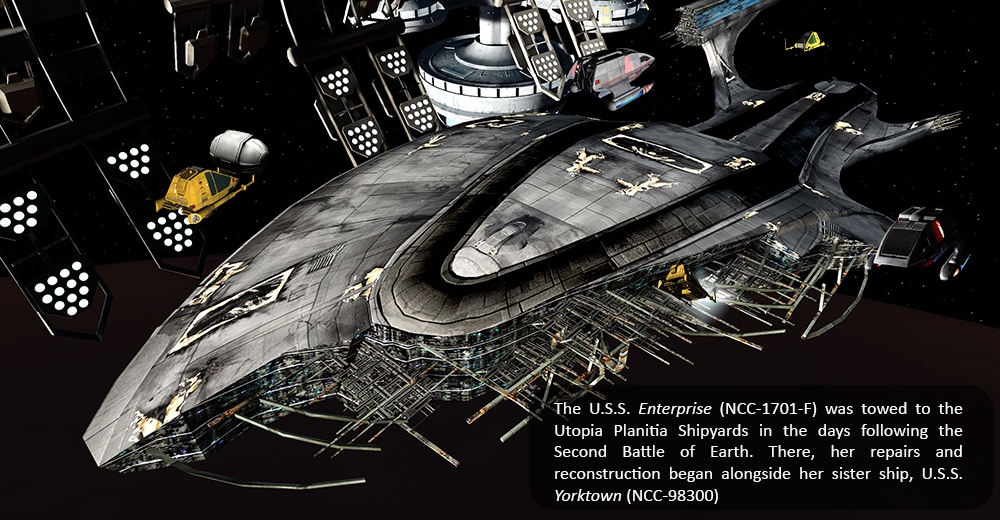 Her sister ship, the U.S.S. Yorktown, floats just one slip over, bustling with similar activity. Yorktown had it even worse than Enterprise, considered by the Admiralty to be a total loss after the battle. Starfleet Engineers and the Advanced Starship Design Bureau had other plans, however, and quickly drafted an ambitious plan to rebuild the Yorktown using the advancements in starship design that had been hard learned in the last 18 months.

The result was to be the lead ship of a new class. Like the refit programs seen by the Constitution and later Excelsior classes of the 23rd century, Yorktown’s spaceframe retains similar lines to her original incarnation, but all of her key systems have been gutted and replaced. Though Enterprise saw less damage than her sister ship, the Admiralty agreed that it might as well use the extensive time required to repair her to put her through the same round of upgrades as Yorktown. While on paper the Enterprise remains herself, Yorktown has already been re-christened with a new registry number.

The surviving crews of both ships were instrumental in shaping the capabilities of the new class. “Though we barely got to know her in her original skin,” Shon muses as he walks me through a holographic comparison of Enterprises old and new, “we noticed key deficiencies in the Block I design. Mainly, her focus on survivability and flagship operations limited her flexibility when it came to the variety of mission profiles you’d expect from a Star Cruiser.

“In the few ‘quiet’ missions we did have, I found myself wanting a more versatile deflector array, more specialized field projector equipment, and more sensitive sensors. We’ve gotten all of that and more in this refit, not to mention bigger engines, defensive upgrades and improved automation.” 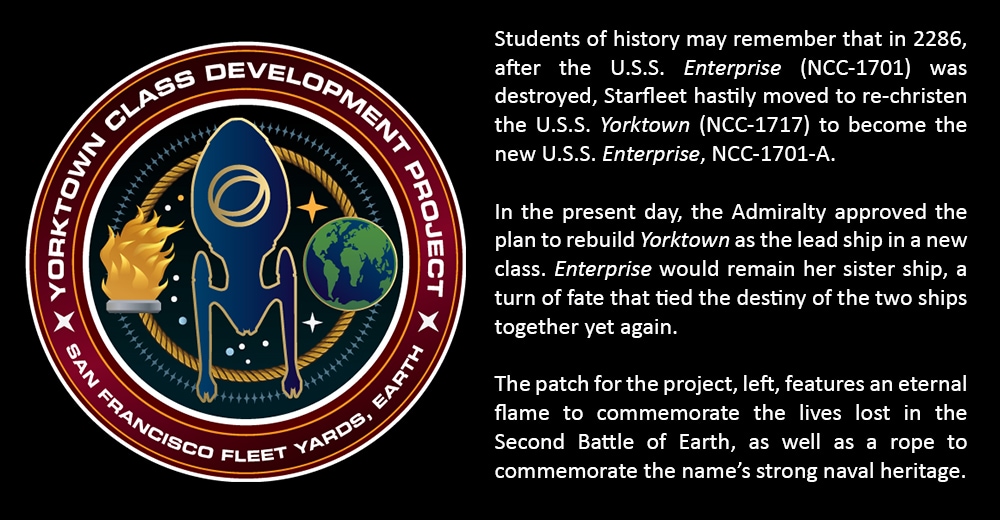 Automation is a key component of the Yorktown-class refit and Starfleet’s sixth generation of starship design. While the refit Enterprise is considered at optimum readiness with 2,100 cew, she still qualifies for mission-ready status with only 900. “Good thing, too,” Shon continues, “because after everything the Federation has been through, it’ll take nearly a decade to get Starfleet’s headcount back to pre-war levels.”

Indeed, almost all new construction has seen a drastic reduction in allocated crew compared to pre-war years. This has caused the fleet some difficulties in the recent skirmishes with the Tzenkethi, Shon admits, but “if we can, somehow, endure a challenge like the Iconians, we’ll figure this one out too.”

After our initial conversation ends, Shon gets up to begin my tour of the ship. He stops next to the door of the ready room and points at a small bronze plaque next to the room’s entrance, the only decor that has been hung so far.

Shon smiles as I read it. “Admiral Riker himself gave that to me after the battle. He remembered saying it to his captain when the Enterprise-D discovered Iconia. Having this ship survive its own Iconian encounter had a certain ‘symmetry of destiny’ that he found amusing.”

As we tour the ship, the pressing need to get Enterprise back into service becomes apparent. Though she’s expected to launch far below her optimal crew count, every deck is crowded with both ships company and yard hands.

“Theoretically, we’re ready to go,” Shon says as we leave main engineering. “But with so much new construction being done so quickly, ASDB is doing a lot of on-site systems checks before our shakedown cruise next week.” 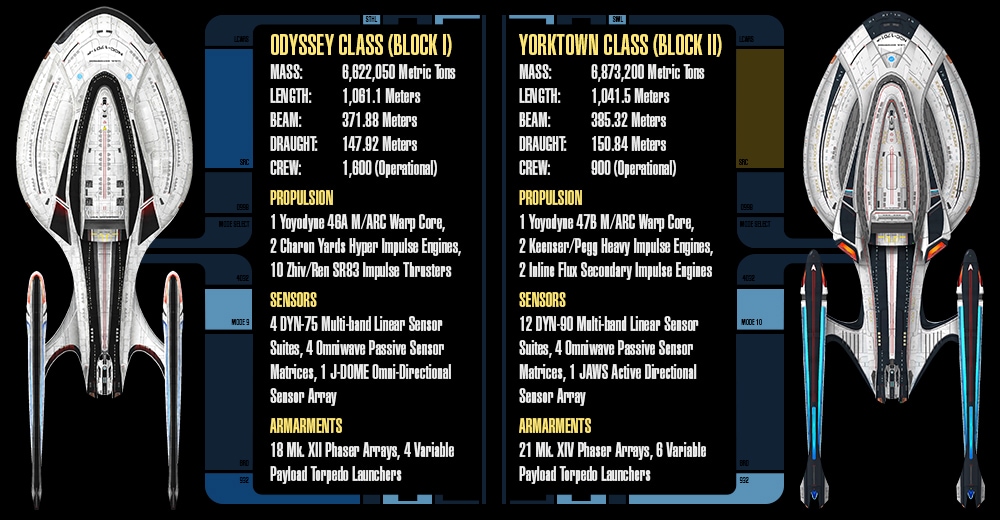 We pass by a pair of engineers elbows-deep in isolinear circuitry and conduit. “How’re things coming along, Lieutenant Whetu? I hope Mr. O’Brien’s isn’t making your life too difficult.”

The two engineers stand up and face Shon, surprised and a little apprehensive, as if they’d been caught with their hands in the cookie jar.

“Sir! No, sir,” Whetu replies, blushing a bit before she wipes a blob of bio-neural gel off her hand and onto her stained work uniform. “In fact, the ASDB has incorporated several of the Commander’s ideas to the base specs for Yorktown and Sojourner.” 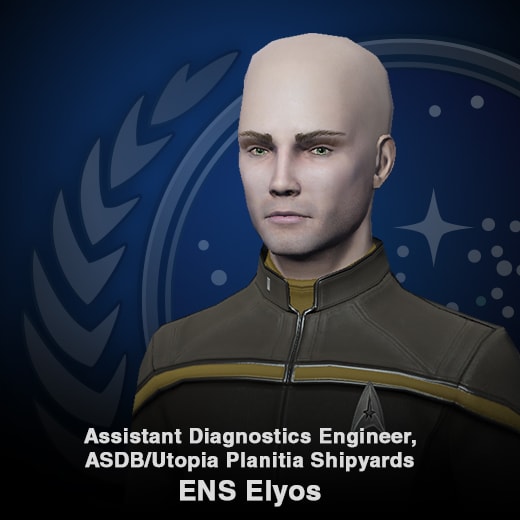 “Excellent,” the captain smiles that dutiful smile all captains must master and makes introductions. Lieutenant Whetu and Ensign Elyos are yard hands whose technical expertise and quick thinking have quickly earned them a variety of commendations. Privately, Shon expresses his gratitude to have them working on his ship, and notes that “we need exactly their kind of ingenuity if we’re going to rebuild the fleet as quickly as circumstances require.”

As if on cue, Shon’s combadge beeps. “Bridge to the Captain.”

“Shon here,” he stares at me meaningfully. I could tell he wasn’t expecting this, and his antennae straighten in surprise at what happens next.

“You better get up here sir. We’ve received an urgent Alliance communique that I don’t quite understand. It says that the… Hur’q... are attacking Deep Space Nine.”

“Another memorable journey,” Shon mutters to himself. He apologizes for cutting the tour short and grabs a crewman to escort me to the nearest transporter room. He turns in the opposite direction, heading for the bridge. Before he even disappears from sight, I hear his voice over the ship’s intercom:

“We are one of the few capital ships with a slipstream drive fast enough to arrive in time. Unfortunately we will not be able to evacuate all yard personnel before we depart, but section chiefs will organize evacuation for personnel nearby transporter rooms.

“To those stuck with us, let me tell you that this isn’t the first Enterprise that has rushed from the yard into action, and this won’t even be the first time this ship has fought to defend Deep Space Nine from an unexpected foe.

“We will do what we must, as Starfleet officers, to protect the innocent and nurture the peace that we all hope to grow. I know that each and every one of you has the right stuff to take this ship into the fray and see her back safely again. We depart in 15 minutes. Shon out.”

I reach the transporter room and wait for a large cadre of yard hands who were directed to leave with me. They arrive and nervously mount the pad, eager for safety but clearly anxious for their colleagues who are going to have to ride into battle with a ship that was just not quite ready. As the cylindrical room disappears into a shimmering blue mist, I wonder to myself how the whims of fate will treat Enterprise this time.

I thought back to recordings of the Second Battle of Earth. As Alliance ships joined formation in a final effort to stave off the Iconian advance, Shon himself quoted a poem from Earth’s distant past.

Theirs not to make reply

Theirs not to reason why

Theirs but to do and die:

Into the valley of Death, Rode the six hundred.

The Enterprise saw her way through the valley then. I knew that she could do it again. 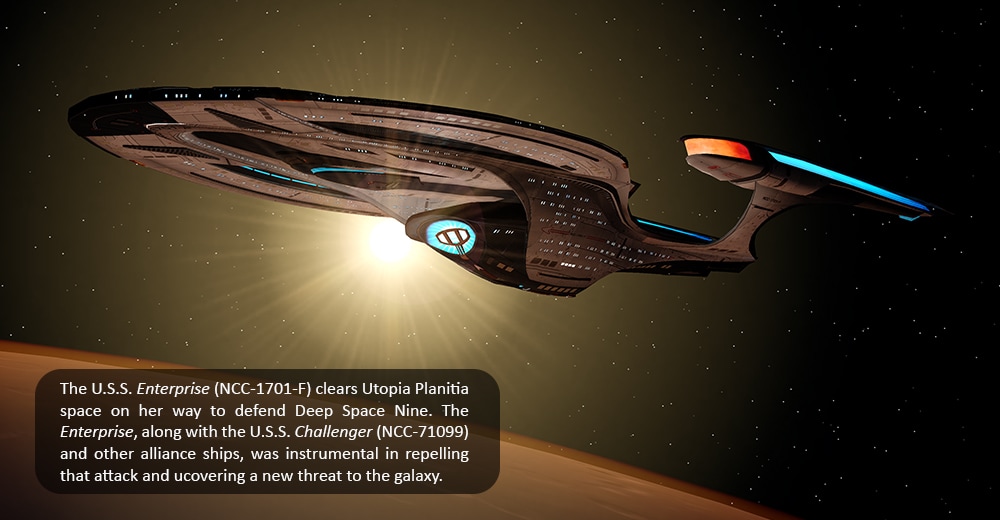