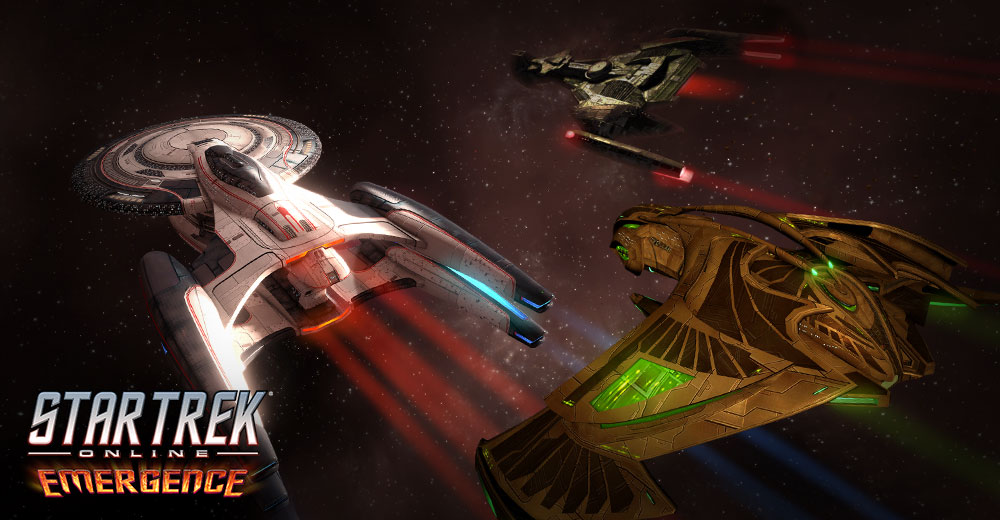 Modern starship engineers are continually in search of the perfect design, constantly tweaking and improving on existing concepts, while also inspiring new technology to solve the barrage of unknown scenarios constantly encountered at the edges of known space. We’re pleased to announce the impending release of the Miracle Worker Ship Megabundle – the latest ingenious designs in cutting-edge starship technology will soon be at the fingertips of captains of all factions in Star Trek Online.

Click on the right side of the image to scroll through the gallery below and see all the new ships!

Federation, Klingon Empire, and Romulan Republic shipyards will each be producing their own variants of these formidable new ships, each combining the strengths of existing Cruisers and Warbirds with new and improved functionality that will be the standard for any future Miracle Worker starships. Here are the most noteworthy of those features:

As an additional design detail worth noting, this will be the first time a Klingon-designed vessel will be a “true” Cruiser, including access to all four Cruiser Commands. The Romulan Republic has chosen to stick with Singularity Warp Cores and Singularity functionality, so will be classified as a Warbird.

These starships will soon be available in the C-Store and can be purchased by level 50 players (Vice Admiral and Lieutenant General ranks). All three factions share the same three Universal Consoles and Starship Traits with variants from the other factions.

Miracle Worker vessels have access to the Innovation mechanic, which reflects the ingenious solutions you and your crew can pull out of thin air to aid in difficult situations.

This mechanic will be represented by a new UI element that will appear on the players’ viewscreen while piloting any Miracle Worker starship. It is comprised of two primary elements:

These are represented as a series of Blue, Red, and Gold lights, corresponding to Science, Tactical, and Engineering abilities respectively. This informs the player which profession’s Bridge Officer abilities need to be used in order to trigger the Innovation Effect.

Ability Sequence Requirements are randomized each time the mechanic refreshes, and individual requirements may be doubled, or tripled. As a few examples, valid sequences can be:

Players may activate the required Bridge Officer Abilities in any order to satisfy the sequence. As soon as the third and final ability requirement is satisfied, the Innovation Effect will immediately trigger (as long as you are in Combat).

One of six possible Innovation Effects will be randomly selected each time the Innovation Mechanic refreshes.

Which Ability Sequence must be activated, and which Innovation Effect is triggered are both randomized each time the mechanic refreshes. It will refresh after a brief lockout period which follows each triggered effect, or whenever you first enter a new instance.

Untold years of starship design study make it second-nature to know the right structural weak spots to hit to send chunks of hull flying into space with your starship's weapons. This firing mode represents that knowledge, coupled with a willingness to perform field repairs using whatever materials may be handy - including those chunks of enemy starships! Tractor in the debris to grant yourself additional defenses, after activating this mode to briefly cause Supply Pods to be spawned near foes that you deal damage to.

Sometimes genius is accidental, and nowhere is that more true than when you dare to tamper with temporal causality. By manipulating the chroniton flux present within the plating of your starship, you can temporarily defer incoming damage, while also speeding up your weapon cycles and ability cooldowns. While active, no damage will be sustained. However, once the effect ends, causality takes its due in the form of deadly chroniton radiation that cannot be removed (but can be reduced by resistances). This grants the benefit of spreading out a potentially deadly spike of incoming damage over a much longer period of time, allowing you additional time to enact countermeasures. But destiny cannot be forestalled indefinitely!

Originally invented by Geordi La Forge as a ruse to outwit his would-be captors, this piece of technology eventually ended up being made into reality many years later. Although it was originally intended to cripple only the weapon systems of a number of enemy combatants, it's final design also ended up having a debilitating effect on the enemies' ability to repair any damage their ship has sustained.

Stay At Your Posts

Activating an Engineering or Miracle Worker Bridge Officer ability will reduce the recharge time of Tactical Bridge Officer abilities. The amount of cooldown reduction is increased if you are currently below half of your maximum hull capacity. This may only occur once every few seconds.

Photonic Boarding Party does not require you to launch Shuttles. Instead, your boarding assault teams immediately beam over to the targeted foe's ship, and immediately begin applying the debilitating effects already associated with Boarding Party. Using Photonic Boarding Parties is also more time efficient, allowing them to be ready to deploy more quickly. Note: Having this trait slotted removes the Shuttles entirely from this ability, potentially interfering with any effects designed to enhance them.

While Beam: Fire-at-Will is active, any damage that your starship receives will periodically extend its duration.

(** All of the above details are subject to change.)

These starships will be available in the C-Store individually, or in faction-specific packs of 3 variants each, or as a single “Mega-Bundle” containing all 9 starships.

Exact features, stats, and additional details on this set of resilient and versatile starships will be posted to this website very soon. Keep an eye pealed!

Infinity Duty Officer Promotion!
Duty Officer Packs are on sale for 20% off this weekend on PC, and during this sale, they can open into a T6 ship, including the new Discovery Era Constitution and D7!
Read more
To Hell With Honor
To Hell with Honor, our first ever TFO pitting space forces against ground forces, is coming with our Anniversary Update!
Read more
PC Patch Notes for 1/16/20
Check out all the exciting changes coming to Star Trek Online in our latest patch notes!
Read more