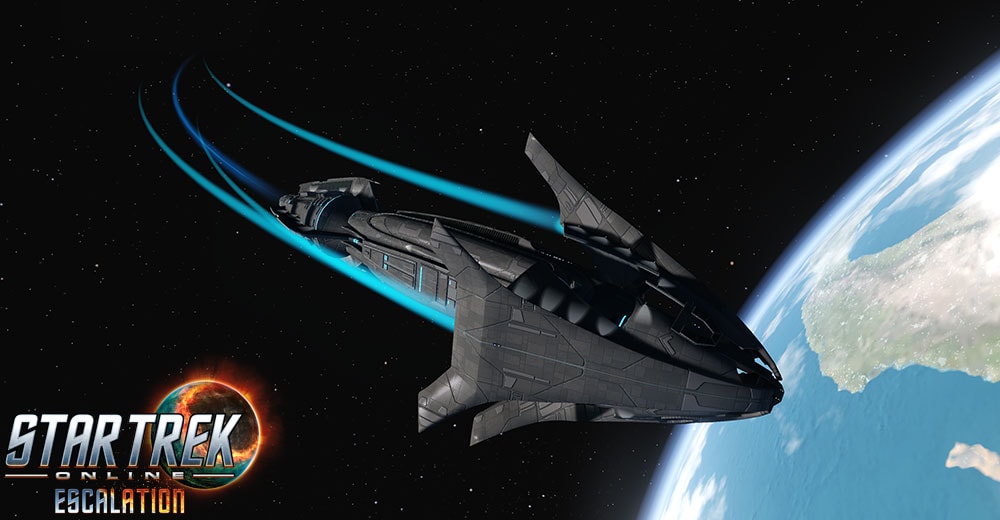 From August 17th, 2017 at 9am PST until September 7th, 2017 at 10am PST, we’ll be featuring a promotion that will provide an extra bonus when purchasing Research & Development Packs from the C-Store.

As part of our continuing celebration of the 30th Anniversary of Star Trek: The Next Generation, we’ve pulled this massive vessel straight from the silver screen of the TNG-cast’s film, Star Trek: Insurrection. Last seen threatening a Ba’ku colony world with extinction, this devastating vessel can now be obtained by members of the Alliance to help combat the galaxy’s emerging threats.

Since the days of the infamous Briar Patch Incident, the Son'a have earned the reputation as being outcasts of the Alpha Quadrant. Despite this reputation, there's no denying that the Son'a remain at the forefront of medical technology, as well as being in possession of incredibly powerful sensor and energy absorption technology. Using these advancements on their vessels makes them formidable foes, capable of outmaneuvering and debilitating most of their enemies.

The massive Son'a Collector was originally constructed as a stationary, purpose-built technology platform, intended to convert and collect the metaphasic radiation found near the Baku homeworld within the Briar Patch. Since that time, the ship has been refitted with all of the necessary weapons, engines and other subsystems, to allow this formidable piece of technology to function as a dreadnought within the Son'a fleets. It still possesses the energy-absorption technology it was originally built to use, as well as now housing a wing of fighter pets, its own weapons arrays, and much more.

Activate to deploy the Collector's huge absorption sails. While deployed, your starship will gain a passive increase to the Drain Expertise skill, as well as absorbing a portion of all incoming Energy Damage. After absorbing a certain amount of incoming energy, the absorption sails will release a powerful burst of thermolytic energy which will restore a portion of your hull capacity while also causing Radiation Damage to foes in front of the sails.

As a trade-off for these powerful capabilities, the Collector will be significantly slower and less nimble as long as the sails are deployed. You will also be unable to use Full Impulse while in this mode.

Once deployed, the Collector will remain in this mode indefinitely. Deactivating it will put it into a brief recharge period.

Adapted from the Collector's original injection assembly, this powerful explosive device can be launched toward a foe's current location. Upon reaching its destination, the payload is detonated, releasing a slow-moving horizontal shockwave of exotic particles that cause caustic thermolytic reactions in nearly all matter it encounters. Enemy starships caught in the blast wave will suffer heavy Radiation Damage immediately, then additional Radiation Damage over Time. As their ship's hull is eaten away, they will also suffer a Damage Resistance Debuff that increases over time.

If used while Consumption Array is deployed, you receive a small amount of hull healing from any foes affected by the Radiation Damage.

Activating any Subsystem Drain or Shield Drain Bridge Officer Ability applies an instant Pull to all foes within 5km, dragging them a bit closer to you. After this Pull is done, all Foes within 2.5km will suffer a small amount of Radiation Damage. A portion of the damage dealt by this trait will be returned to you as a Hull Heal.

These extremely nimble small craft are designed for both space and atmospheric assault. Outfitted with Isolytic Plasma weapons, they can also use a limited version of Energy Siphon, and will passively leech Hull from enemy ships within a short distance of themselves, causing a small amount of Radiation Damage and healing themselves.

The existing “Son’a Technology” Console Set, consisting of the Subspace Barrier Agitator and Deep Analytics Sensor Package consoles, has been expanded to also include the Thermolytic Injector console found on this starship. In addition to the existing 2-piece bonus, there is now a 3-piece bonus that can be obtained when all are equipped on the same Son’a vessel.

When all three consoles are equipped, the recharge time of all three special console abilities are each reduced by 1 minute (from 2 minutes apiece).

Ships of the Line: Nebula Bundle!
The second Ships of the Line Bundle is coming next week, and it's all about the Nebula Class - and all ships in this line have been redone with beautiful new visuals!
Read more
PC Patch Notes for 9/17/20
Check out all the exciting changes coming to Star Trek Online in our latest patch notes!
Read more
Upgrade Weekend!
Captains on PC can earn double the tech points on their upgrades this weekend!
Read more