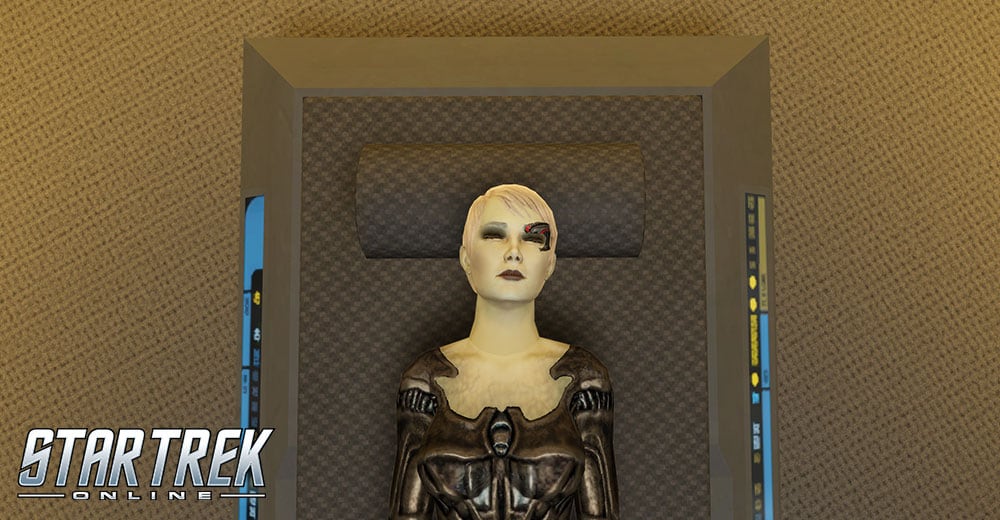 There was warmth, and there were voices. These were all that had ever been. She floated in the dark, heard the voices, but they only had one command for her - grow. This, she did naturally. There was rarely need for her to pick out a single voice above the din, though she did sometimes anyway. Cube 10683 was dispatched to Sector 884. Drones were assigned to repair duty on Unimatrix 5. Always, always watch for the next opportunity to assimilate Species 5618.

Then there were no voices, and she was not warm. No screaming. Blessed, blessed silence.

Then one voice. She could not see. Her eyes were closed. If she opened them, there would be light. She was not ready for light, yet. The voice was in her ears, not her mind, and speaking the language of Species 5975. Local designate: Cardassian.

“Human,” the voice said. “Female. Biological age: fourteen, but there is insufficient telomere degradation for that age. Markers of Borg genetic engineering. Increased muscle and bone density. We have deactivated the neural relay and removed subspace and quantum communications devices, but it will take a doctor more well-versed in human anatomy to finish the process.”

The voices that had been with her since her birth were silent, and, suddenly, she was very, very tired. So she slept.

At low warp, it was a four month trip from the Orias system to Deep Space Nine, and the old research ship’s engines were strained anywhere past Warp 2. That suited her just fine… the research ship was quiet, while Deep Space Nine was a busy port. And besides all that, Taselle was on the Gavral.

No one had yet told her how she was found, but she had pieced together enough. The Gavral was a research ship with a crew of eight, performing a survey on the sixth moon of Orias V. They had stumbled across a small, badly-damaged Borg ship transporting drones in growth pods,  and of those being transported, the only one they had successfully removed from the pod before scuttling the ship was her.

Taselle was the daughter of the doctor who had deactivated her implants and the ship’s sensor officer, and was… brilliant. Effusive Comforting to be around. It was Taselle who had responded to her hesitant introduction - “My designation… Three of Four…” by opening the ship’s library and researching human names. It was Taselle who had helped her choose the name she would use. Erika Marie Tatsu. Who had helped her through sounds and meanings until she found one that fit. It was Taselle who taught her to play - who had explained what play was, who had shown her Mengar, that Cardassian game with stones and a board that she explained was similar to a human game called mancala. And who had beaten her at it. And who had made her laugh.

“I like the quiet,” Erika said one day. “But I do not always know what to do with it. The silence is sometimes too loud, when I try to sleep.”

“Then wake me,” Taselle replied, placing a stone and capturing four of Erika’s. “And I’ll talk about the grounds of Lakat Academy, and catching voles in the quad.”

“You need to sleep too,” Erika began.

“We brought you out,” Taselle said, touching her hand. “That makes you family. And family is the most important thing.”

She cried for the first time last night, knowing that they were there. They crossed from Cardassian to Bajoran space while she slept, and when she woke, they were in the midst of final clearance to dock. Outside the small porthole in the cabin she shared with Taselle and two maintenance engineers, Erika watched ships float in the space around Deep Space Nine. Bajoran, Starfleet, Klingon, Ferengi… she stopped herself at each, willing herself not to remember them by species designation. They were individuals, as was she.

Taselle woke with her, and they dressed together. Erika took a sonic shower - Taselle did not need one, but Cardassians sweated far less than humans did, especially in the warm humidity of a Cardassian ship - then it was time to go. Taselle walked with her to the docking bay, where the ship’s captain - a tall woman Erika had only interacted with briefly - was talking with a human man in a Starfleet uniform. When they were done, the man lowered his body to stand eye-to-eye with Erika, and offered her what he obviously thought was a winning smile. When a Cardassian smiled to show kindness, they made sure not to show quite so many teeth.

“My name is James Kurland, and I’m the Captain of Deep Space Nine. I’d like to take you to our infirmary so they can check on your implants, and to welcome you to the Federation.”

He was trying to be kind, and Taselle squeezed her hand. Erika took a deep breath. “Thank you, Captain,” she said quietly. Stammered, just a little. There was too much noise in the docking ring behind Kurland, and she did not want to go. But… “Please.”

“Follow me,” Kurland said, straightening up. He seemed satisfied that she was comfortable. Taselle whispered, “I will call,” then released her hand. But something was left in Erika’s hand.

She looked down at it. A cobalt blue stone that fit comfortably in her hand… the one she’d used for her last move the first time she’d beaten Taselle at Mengar. She smiled to her friend, who smiled back. Clutching the stone tightly in her hand, she followed Kurland onto the station.

“I’ve submitted our final report on the H’atoria incident, Commander.” Liresh stood too still, a habit that was more than a little off-putting to much of the organic crew but that Erika found comforting. Her first officer was still learning the sorts of mannerisms that humanoids expected, and those, more than the exposed circuits along her brow and on her neck, marked her as an outsider. Erika preferred outsiders. “Second shift is about to come on. Will you be dining alone?”

“No,” Erika said. “I’ll eat in the officers’ lounge. Why don’t you invite Caroline? We’ll make an occasion of it.” After the encounter with Singh’s huge Gorn, she urgently needed to relax.

“I will,” Laresh said, turning to leave. Then she paused. Looked back at Erika. At her desk. “May I ask a question of a personal nature, Commander?”

“Of course.” Erika offered a smile. She still had that Cardassian habit of hiding her teeth when she smiled.

“The stone on your desk. What is it?”