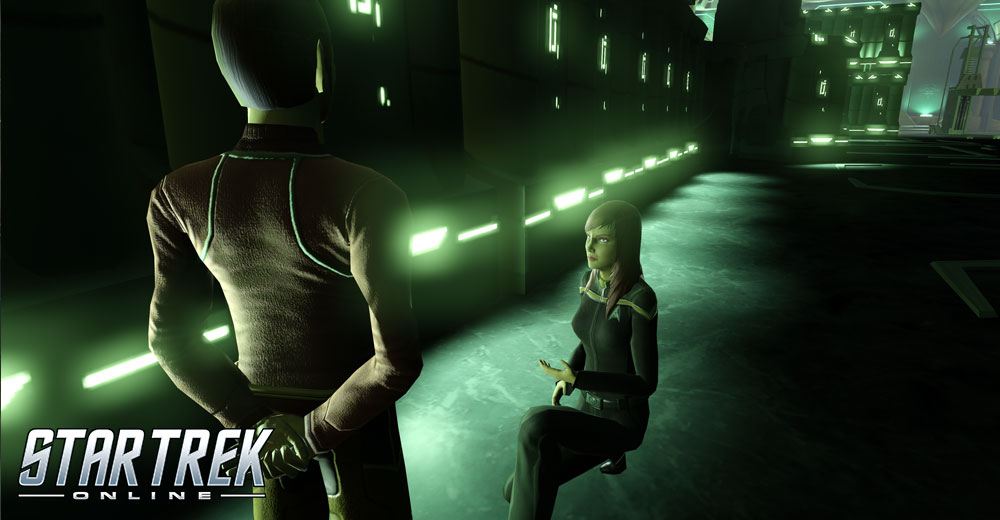 Outpost 14, near the Romulan border

It was far from a typical day aboard the trading outpost. The main deck, normally teeming with vendors selling their wares, was flooded with Romulan refugees, all of whom had been attempting to escape the chaos that consumed the Empire following the loss of Romulus. Scattered among the weary faces was a contingent of Starfleet Officers who had sworn to help these desperate people, despite the saber-rattling from what remained of the Imperial Senate. Outside the outpost, a swarm of Romulan ships sat in wait for a chance to transport their passengers and crew, all either trying to escape the pirates who now plagued the unprotected trade routes, or simply looking for any place to put down after weeks of being turned away from other settlements. There weren’t many outside the Empire who were willing to take in the refugees. There was already mistrust when it came to the Romulans, but reports of some refugees resorting to looting had put outpost crew on edge. The tension could be felt by everyone, including the new arrivals who entered the outpost that morning.

A freighter captain, his wife, and their son walked onto the main deck together. The captain seemed to be a typical Romulan; tall, dark-haired, and despite the circumstances, he walked with pride and confidence. His wife and son, however, stood out from the crowd; they both shared the same blonde hair that was atypical of their people. While the wife seemed reserved, the teenage son carried a quiet arrogance about him. Where the parents were relieved to have been given quarter on the outpost, the son only felt disdain for his new surroundings. He watched as his once proud people accepted handouts from their greatest enemy. And he couldn’t help but feel disgusted…

The father noticed the look of disdain in his son’s eyes. He stood over his son and told him, “Hold strong, D’Ter. These people are here for the same reason we are”.

The son looked up and asked arrogantly, “And why must we be here, father?”

“Because we need to be. Because right now, there is nowhere else…” his father replied.

The son looked away, staring at the crowd as the mother looked to the father with concern. “Ailhun, will we truly be safe here?”, she asked the father.

The father looked back to her, taking her hand reassuringly. “We are V’Lors”, he replied, “And V’Lors have always faced hardship with strength and pride. Just as we will face this now”.

He began to walk with his wife, but the son stood there, still bearing his disgust. The father walked over to his son, and told him, “This is only temporary, my son. Once it is safe to go back out, things will return to normal, I promise”. The younger D’Ter looked back to his father, and softening his glare he rejoined his family as they made their way through packed crowd.

The outpost had entered into Night shift. Most of the families had settled down in an enclosed section of the main deck. Among them were the V’Lors, huddled together under a single blanket. While the elder V’Lors slept, young D’Ter was still awake. He was surrounded by the restless and the weary, all bundled up beneath Federation blankets. As the young Romulan continued to examine his surroundings, he grew more restless. In the far corner he witnessed the outpost supervisor arguing with Starfleet Officers. With his Romulan ears, he was able to just make out what the argument was about: The Supervisor wanted to stop taking in new refugees and start evacuating the station, and the Starfleet crew was pleading to keep the station open until things stabilized. While D’Ter couldn’t understand everything that was said, it was enough to set the young Romulan off. He broke away from the group and headed down an empty corridor. While no one among the refugees noticed him right away, one of the Starfleet Officers did. The officer excused herself, and followed the D’Ter down the corridor.

Young D’Ter found himself in an unoccupied section of the outpost, far enough away from refugees that the only noise came from hum of the outpost’s systems. The lighting remained deactivated, but starlight came through a large view-port. Compared to the main deck, the space was almost like a sanctuary. He made his way to the view-port, and stared out into space.

This view-port just happened to face towards Romulan space. He stood in front of the view-port for a long time, as events from the past five weeks ran through his head. The destruction of Romulus, getting cut off from their supply lines, fighting off pirates as they looked for a safe port… all the terrible things that led his family to this place. The more he dwelt on these events, the more his anger swelled, until he ran his fist into the reinforced glass with a thud.

From the darkness behind him, a voice said, “If you’re trying to leave, that might not be the best way to do it”.

D’Ter suddenly turned around, straining his eyes through the dark to see who was there. From the shadows, the figure of a woman with blonde hair began to emerge. At first, he thought it was his mother, but the light soon revealed that the woman had round ears, ridges on her nose, and was clad in a Starfleet uniform.

The mysterious woman continued, “Unless you know how to breathe in space, it might be best to make your way back to the docking port” she retorted with a light smirk.

The young Romulan was not amused by her remark. “You are… Bajora, are you not?” he asked.

The woman nodded, replying, “I’m Commander Dega Nies. And believe it or not, I went through something like this when I was your age”.

D’Ter nodded, asking, “Your world… it was taken in war by the Cardassians, yes?”

“Yes, it was”, the Commander replied, “My people were displaced for a long time. We settled where we could and did what we needed to survive-”

D’Ter interrupted, “What is your point, Bajora? Your home was only lost to you, not gone. What would you know of my people’s suffering? Of my suffering?!”

The Commander replied calmly, “My point, Romulan, is that I do know what you’re going through. Many of my people had given up hope on ever getting Bajor back. To them, it might as well have been destroyed”.

D’Ter was taken aback by the Commander’s frank reply. He stood there as the Commander continued. “But we held on to who we were. And when the chance came, we built a new reality for ourselves. I’ll admit, things are different with your people. You’ve lost alot more, and the biggest threat your people face isn’t from outside the Empire…”

D’Ter looked away for a moment, finding the Commander’s words hard to swallow. As he stared back out the view-port, Commander Dega came up from behind him, and rested a hand on his shoulder. “But”, she said, “if your people can hold on to who they are, then they’ll get though this. And so will you.”

D’Ter looked back, staring at the woman’s reassuring smile. Slowly, his anger melted away, but the sorrow that sat just beneath began to seep through. With a broken voice, he asked, “What happens to my people now?…”

“That’s for your people to decide”, she replied, “But if there’s one thing I know about Romulans, it’s that they don’t stay down for long”. She smiled, before disappearing back into the corridor, leaving the young Romulan to look back out to the stars and ponder her words.

The Romulan Commander turned to face the Ferengi manager of Draygo Station. “I can’t have these Na’Kuhl vagrants loitering on my station!” the Ferengi exclaimed, “Every minute they’re here, I lose money! Now what do you plan on doing about them?!”

Before the Commander answered, he looked over the faces of the Na’Kuhl refugees. Among them, he saw the broken and the weary, all huddled together under Federation blankets with their families. He couldn’t help but be taken back to his time as a young man aboard Outpost 14. As he examined the crowd, he saw off in the corner a young Na’Kuhl male, standing by himself and staring out of a view-port towards the Na’Kuhl System. Seeing a familiar look upon the young Na’Kuhl’s face, Commander V’Lor turned to the Ferengi and replied, “Right now, these people are staying right here. I can arrange for transport ships to move these people to a more permanent location, but you will not do anything with these people in the meantime. Do we have an understanding?”

Before the Ferengi could reply, the Commander had turned and made his way to the view-port. He approached the young Na’Kuhl, and placed a hand on his shoulder.