The Means to an End 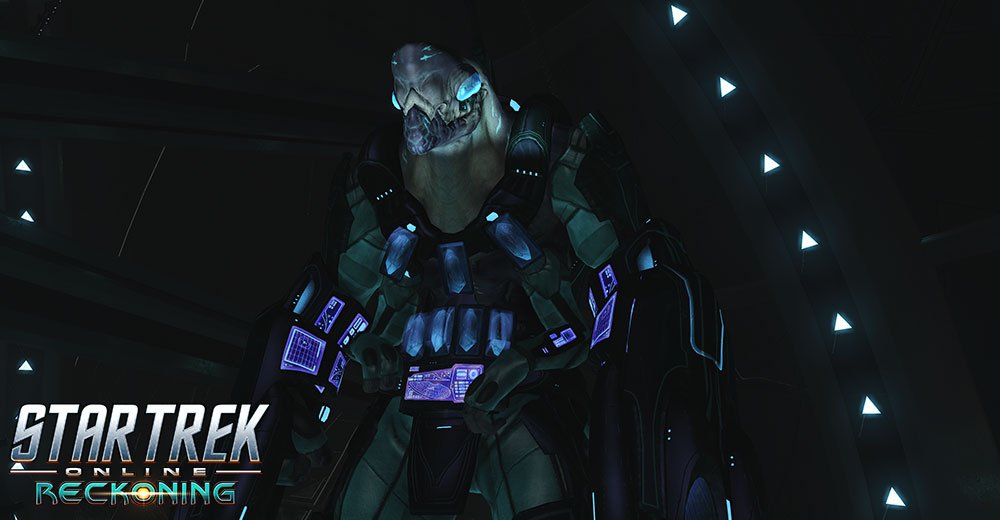 Orbiting inhabited moon in Tzen-designated system Hrith, local designation Lukari Prime. We await the return of diplomat Shra Tzen-Darrut, here to initiate official contact between the Tzenkethi and Lukari peoples. Should they prove worthy, we shall extend an offer of alliance to them.  If they prove hostile, I suspect that the Autarch will extend another kind of offer to them, albeit one far less pleasant.

The world around him went dark for a moment as Captain Aarn Tzen-Tarrak initiated virtual conferencing with his command staff.  A moment later, he joined avatars representing each of his command staff within a virtual meeting chamber.  Several of the officers were enjoying the latest scuttlebutt circulating in the fleet -

“So, the Klingons have invaded Gorn space!”

“Intel suggests the Federation won’t join them.  It could be the end of their pathetic partnership at last!”

“Unlikely.  The grain-eaters in the Federation won’t dare risk open war with their Klingon attack dogs!  Someone’s feelings might get hurt!”

“That’s enough, gentlemen.  Let’s get to it,” the captain said, somewhat impatiently.  “We’ll begin with the tactical assessment.”  Across the darkened virtual field, the avatar of Tactical Officer Ghulghas moved to a central position and brought up several data-files for all to review.

“They’re of little to no threat to us, Captain.  Their military, such as it is, exists purely as a defensive force. They have no space-worthy fleet, though they have established a primitive but effective warp drive platform.  If necessary, one of our Class Three Combat Arrays could bring this world to its knees in approximately 22 solar days.”

“The higher class arrays have more pressing matters, Captain.  Besides, the young have to learn some time.  Better to blood them on this backwater than Earth or Qo’noS.”

Tzen-Tarrak allowed himself a smile at those words.

“Ah.  Well, Ghulgas, I don’t think such an action will be necessary,” the captain replied.  “The Lukari don’t appear to be interested in conquest or expansion… unlike the Klingons or the Federation.”

Science Officer Prult moved to the center of the chamber.  With a nod, he claimed the right to speak from Ghulgas, who returned to the perimeter with the other officers.

“There’s something you should see.  All of you.  It may adjust your threat assessment.”

Tzen-Tarrak arched his eye-ridges in mild surprise.  “Don’t keep us in suspense.  Speak.”

Prult called up aerial footage of the nearby moon.  A grey, barren, coastal region on the surface filled their field of vision.

Ghulgas grunted with annoyance.  “Autarch save us.  They have a mud field.  Surely we’ll need to muster every standing legion to deal with – “

The tactical officer was cut off as a roar filled the virtual space around the avatars.

A brilliant energy detonation took place at the center of the field.  Vibrant energy began to rapidly spread in all directions a second later.  Wherever that energy flowed, grey was replaced by green.  Barren ground became verdant and fertile… all in a matter of moments.

As the other officers stared in astonishment, Captain Tzen-Tarrak regarded his Science Officer with cold, emotionless calm.

“Tell us what we just witnessed, Prult.”

“That, captain, was a controlled protomatter detonation.”

“Protomatter,” the captain said.  “We’ve been working on such technology ourselves, haven’t we?  It was my understanding that our researchers weren’t getting far with it - a few small detonations in laboratory conditions, nothing more.”

“Correct, captain.  As you can see, the Lukari have had remarkably better results.”

“Bah! So the Lukari can make their ugly mudball less offensive to the eye,” scoffed Ghulgas.  “I tremble before this revelation!”

Prult turned to face the tactical officer slowly, a look of contempt clear upon his face.  “And tremble you should, Tactical Officer.  A protomatter detonation annihilates all living matter present within its blast area, and replaces it with a new organic matrix.”

“Utterly.  You have just witnessed technology that once struck fear into the heart of the Klingon Empire… and the Lukari use it for terraforming.”

“If provoked, the Lukari could use protomatter to destroy an entire Tzenkethi Legion and replace it with a field of flowers… all in the time it took to say those words!”

The virtual chamber was silent for some time.

“Open a private channel to the diplomat,” said the captain.  “I have new instructions for her.”

Madran took a sip of tranya to calm his nerves.  Dealing with the Tzenkethi was often a stressful activity, no matter how much latinum was involved.  He put on his best Ferengi negotiation smile as the two Tzenkethi officers beamed into the private meeting room.  Still smiling, he stood to greet them, the 62nd Rule of Acquisition on his mind.

The riskier the road, the greater the profit.

“Gentlemen of Tzenketh, welcome.  I trust your journey here was a pleasant one.  Ferenginar is lovely this time of year, is it not?”

The only response was an audible rumbling in one of the Tzenkethi leader’s three stomachs.

“Ah!  Well, who needs pleasantries, eh?  Business!  That’s what we here for, eh?  And business it shall be!”  Madran silently vowed to thank the merchant who sold him that Denobulan antiperspirant.  Sweating in front of Tzenkethi was not a good negotiation tactic.

The uncomfortable silence that followed that remark ended when the alien leader cleared his throat to speak.  About time, thought Madran.  Beginning to wonder if these brutes were going into hibernation.

“We’ll hear your report on the Lukari protomatter technology,” the biggest Tzenkethi growled.

“O-of course!  But first, I’d like to mention a few opportunities in the –“

“Were you able to acquire it?  Speak.”

Madran swallowed nervously.  “Well… if you insist.  You won’t like it, though.”

“Speak quickly, or it will be you who does not like the situation.”

“All right, relax!  I can see you like to get right to the point, so… long story short… no deal.”

“They won’t sell, for any reason!  Believe me, I gave them a lot of reasons to choose from – that tech’s a license to press latinum!  The licensing rights alone could earn enough to buy a moon!  But they dug their heels in,” Madran shifted in place uncomfortably.  “Terribly sorry, my very large, dangerous friends, but this deal’s a bust!”

Surprisingly, Madran was not the target of Tzenkethi beam weapons on the highest setting.

“We anticipated this outcome, based on our ambassador’s initial assessment of the Lukari morality,” the Tzenkethi leader said calmly.  “We have a new proposal for you, Ferengi.”

Madran cringed.  “A-and what might that be, your immensity?”

The Tzenkethi commander looked down at him silently for a few seconds.  Probably wondering if I’ll taste better grilled or fried, thought Madran as the alien antiperspirant failed at last.

“We want you to acquire data on their protomatter technology… through non-conventional means.”

“It’s going to be very costly.  The Lukari… well, they’re not overly fond of me, and their data forts are notoriously stout.  Getting to that information will take some doing.”

The Tzenkethi leader handed Madran a PADD with a financial proposal displayed upon it.  It was all Madran could do to avoid shrieking with greedy delight when he saw the final figures.

“I believe we have a deal, gentlemen,” the Ferengi managed to mutter as visions of gold-pressed latinum swam in his mind.  “I’ll be in touch.”

“Staff of the Nagus,” he said after the Tzenkethi beamed out of the chamber.  “I’ll have enough for my own ship after this.  Yes… DaiMon Madran… has a nice ring to it!”

“The Ferengi seemed pleased, Captain.”  Science Officer Prult turned to face his commanding officer as they beamed aboard the Fearless, in orbit over Ferenginar.  “I thought he was going to faint.”

Tzen-Tarrak nodded in agreement.  “Greed motivates such creatures strongly.  Our profile indicates that Madran will be able to deliver the data to us within a month’s time.  Once we have it, we’ll be able to make a breakthrough on our own protomatter technology.  And we won’t be using it for terraforming projects, I can assure you.”

Prult ground his teeth nervously.  “And then what?  Using a protomatter weapon will not go unnoticed by the Federation or the Klingons! They’ll surely see it as an act of war!”

“We face a crisis greater than both Federation and Empire combined.  You know this, Prult.  You’ve read the same reports I have.  Every day, we lose ground.  But with a protomatter weapon, that ends.  With it, we will regain our primacy.  Tzenketh will stand alone, supreme!”

“If there’s anything left of Tzenketh to stand.”

“There will be.  Delivering this technology to the Autarch will bring new prestige – to me and my crew.  In the Admiralty, I can guide the fleet to victory far better than the hidebound, toothless fools that run things now.”

“And what of the Autarch,” asked Prult as they reached the captain’s quarters.  “There’s only room for one upon the seat of power.”

“Indeed,” replied the captain as the doors to his quarters opened.  “I’d say that seat will be well-deserved by the man who singlehandedly saves Tzenketh from certain doom, wouldn’t you, Prult?”

Prult could only nod in silent agreement as his captain took his leave.