A Gathering of Wills 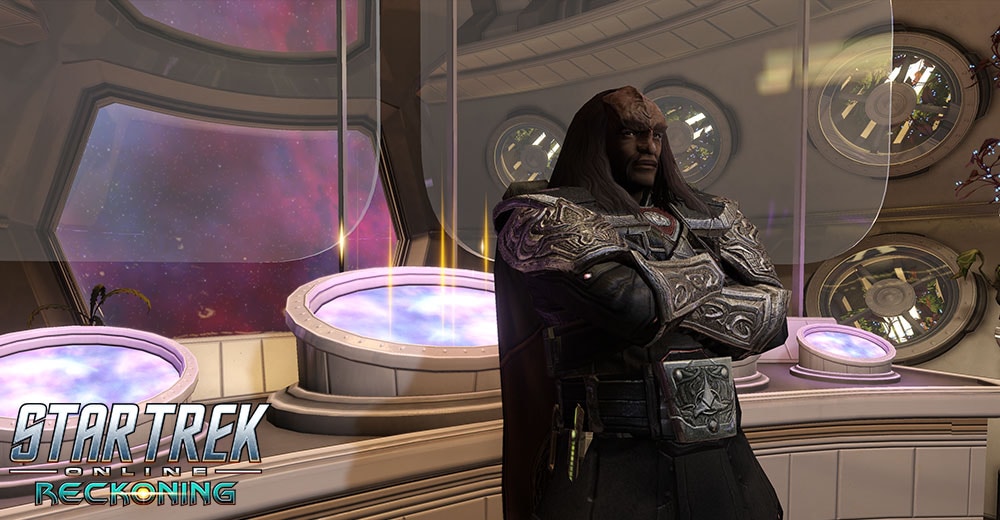 “General Rodek, the Lukari is here early. Shall I keep him waiting until the proper time?”

Rodek looked up from a series of training reports and regarded his attache coldly. “No, Lieutenant,” he said icily. “You shall not. You will also show proper respect to Colonel Taanu, at all times. I will consider any further disrespect as… dishonorable.” The elder officer watched as the younger Klingon squirmed noticeably under his gaze.

“Good. Show the colonel in, then. Afterward, you will report to Commander K’Davh for disciplinary combat drills. Four hours.”

The junior officer carried out his orders, and moments later, Rodek found himself face to face with one of the leaders of the Lukari Security Force. Colonel Taanu was a tall, imposing figure – even to a seasoned Klingon warrior. He briskly stood at attention before Rodek’s desk.

“Qavan, General. I report to you as ordered.”

“Take a seat, Colonel. I wish to discuss your unit’s progress reports.”

The Lukari officer frowned slightly as he sat down. “Is there a problem, General? It is my understanding that all of my troopers are performing at an efficient level.”

Rodek smiled slightly at this. “They are, Colonel. In fact, they are performing at an efficient level for Klingons. I commend their efforts.”

“Thank you, General. We are honored.”

“My instructors shall make appropriate adjustments in future drills, particularly in the areas of strength training and endurance. It appears our initial assessment of Lukari in this regard was not accurate.”

Rodek grinned. “Meaning Lukari are stronger than they look, much like Vulcans and Romulans.” Taanu returned the grin.

“The Breen learned the same lesson, General… albeit under more violent conditions. A lesson they seem to have taken to heart.”

“It may be a lesson you need to share with the Tzenkethi, and soon, if these intelligence reports are accurate.” Rodek called up said reports for Taanu’s benefit. Details on Tzenkethi fleet movements, troop displacement, and more appeared over his desk. Taanu’s grin was quickly replaced by a frown.

“It seems the Tzenkethi are fast approaching a war footing, General. I can see why the Alliance has taken an interest in this, considering the past conflict with the Coalition.”

“Yes. A war the Tzenkethi lost, and bitterly. It is my experience that their memory is long on such matters, and they have a taste for vengeance that rivals our own.”

“News of their super-weapon continues to arrive,” Taanu said grimly. “Protomatter. We Lukari are very familiar with its peaceful uses. To see it perverted into a weapon of mass destruction is disturbing.”

Rodek nodded in response, calling up data on a recent incident in the Draconis system. “I take it these reports from your science division are accurate, then? There is no doubt as to the weapon being of Tzenkethi origin?”

“None, General. It’s theirs. Worse, my colleagues in science tell me it’s likely they’ve detonated more of them on the Alpha Quadrant frontier.”

“Strange. The Tzenkethi have many enemies closer to home, particularly where the Federation is concerned. Bajor, Denobula, Trill… why do they attack these distant worlds instead?”

“This is speculation, General… but I suspect they are testing this weapon, readying a battle doctrine for use against their enemies in the Alliance.”

“Perhaps,” growled Rodek. “Sharpening the blade before the attack. Such a maneuver is unlike them, however.”

“Yes. I have fought the Tzenkethi before, Colonel. I know how they think, how they fight. They prefer a direct approach to battle. Guile is not their strong suit.”

Taanu looked thoughtful. “Whatever their ultimate goal may be, we intend to stand with our allies and do our part. In fact, we’re sending our new flagship out to investigate that protomatter activity.”

“Ah, yes. I take it the shakedown cruise went well?”

“It did, although I am not fond of the ship’s final design and armament. Considering our situation with the Tzenkethi, I felt we should have built a dedicated warship.”

“No. Administrator… that is, Captain Kuumaarke was very persuasive in her arguments,” Taanu said dryly. “Her recent achievements certainly played a part in that decision as well. Everyone loves a hero.”

“Clearly not,” Rodek replied. “Do you have issues with the captain?”

“I respect Kuumaarke and what she has done for the people,” Taanu said. “But I do not think she was the best choice to command the flagship. She is, at heart, a scientist… not a soldier.”

“Perhaps. But this mission is primarily one of investigation. A scientist would be an efficient choice to lead it.”

“Agreed, but if the Tzenkethi are out there, waiting…”

“Then, Colonel, you will be in need of a soldier. Fortunately for you, there are a number of Klingon warriors at hand.”

Taanu nodded in response. “Their assistance would be most welcome, General. Who will be leading the Klingon force?”

“I will see to this personally, Colonel. Of my officers, I have the most experience in dealing with Tzenkethi.” Rodek stood from behind his desk, and Taanu joined him.

“Besides,” the Klingon added with a smirk, “It has been some time since I have had the honor of battling Tzenkethi. A warrior should always maintain their skills.”