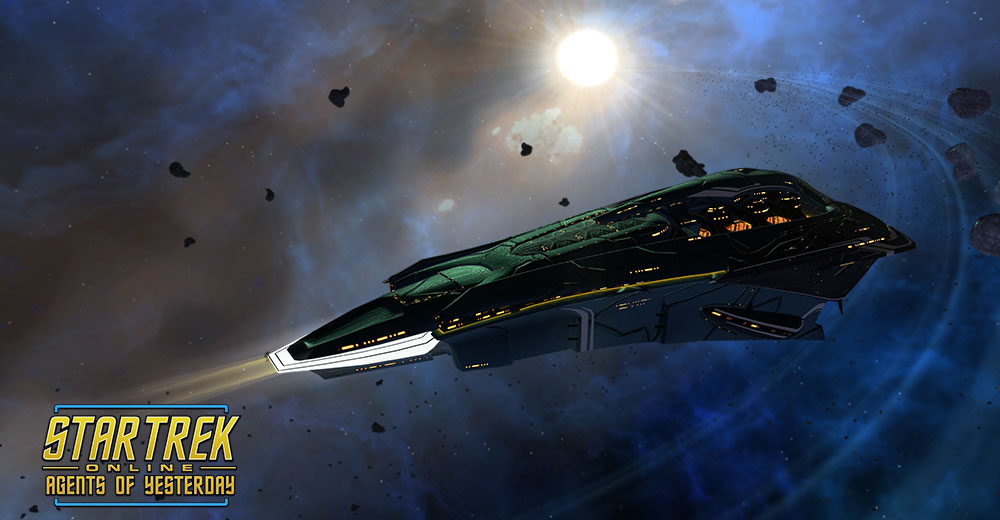 We designed the Tzenkethi character models first, so when we designed the species’ space ships, we knew they had to continue the character of those distinctive designs. We chose a closed shape language and put extra emphasis in making them look like flying shells. They had to look “tanky” and blunt. Later, we decided to add graphic decorations so the ships would look more stylish and intelligent.

As with their ground forces, a fight with the Tzenkethi in space will become easier as you understand their tactics and capabilities further.

Something that you’ll come to realize early on is that a Tzenkethi ship is highly resilient, and the strength of their shields is tough to rival. However, no design is without its weakness. In order for the Tzenkethi to accommodate the strength of weaponry they desired, they needed to sacrifice their forward-facing shield power. In addition, this also meant that they needed to localize their weaponry to keep efficiency up. This resulted in their primary means of damage to be front-facing as well.

The Tzenkethi would not allow such a flaw with their weaponry setup to exist on its own. In response, they equipped all of their ships with familiar mobile capabilities to more than make up for the weapon loadout disparity.

The Tzenkethi know the strength of their fellow comrades. As a result, certain Tzenkethi ships are able to make Tzenkethi technology operate more efficiently when they are in close proximity to each other. Proceed with caution if you plan to employ bunching tactics against a group of Tzenkethi ships.

Higher rank Tzenkethi ships come equipped with long range protomatter-laced weaponry. While these weapons can’t lock on to a ship post-launch, they are extremely potent to the unaware target. As an additional benefit to the protomatter aspect of the weaponry and Tzenkethi technology, the explosions leave behind volatile radioactive clouds. These clouds are extremely dangerous to non-Tzenkethi ships. However, Tzenkethi have adapted their technology to reuse and draw in protomatter; this provides their ships with increased restorative properties and strengthened defensive capabilities.

In space, the Tzenkethi are formidable, and not without a few other tricks. We believe that the Star Trek Online community of captains will show adaptability and cleverness that even the Tzenkethi will not be ready for.

The Tzenkethi ships have been quite fun and very interesting to work on. Since we don’t know much about them, it has been a very rewarding experience for all the artists at Cryptic to develop a language for the design of such a strange Alien culture.

The first steps for the building of any ship come from our talented concept artist Hector Ortiz. He supplied us with very detailed drawings that included different views of the ships, and an actual 3d sketch that he made in 3ds Max. After that, we had meetings and wrote emails (a lot of them) where we discussed all the details that would make these ships so unique.

Once most of the information about the design is sorted out, and we have a good idea of what we need to achieve, we started to figure out the actual material for the Tzenkethi fleet of ships. I will break down the Concept into all the different details and panels that need to follow our ship material master template (all ships need to follow certain constraints so the players can exchange different materials all across the board). Some parts need to be simplified, others need to be able to tile. There is also room for creating new parts, like a weapon port or a section of a panel. 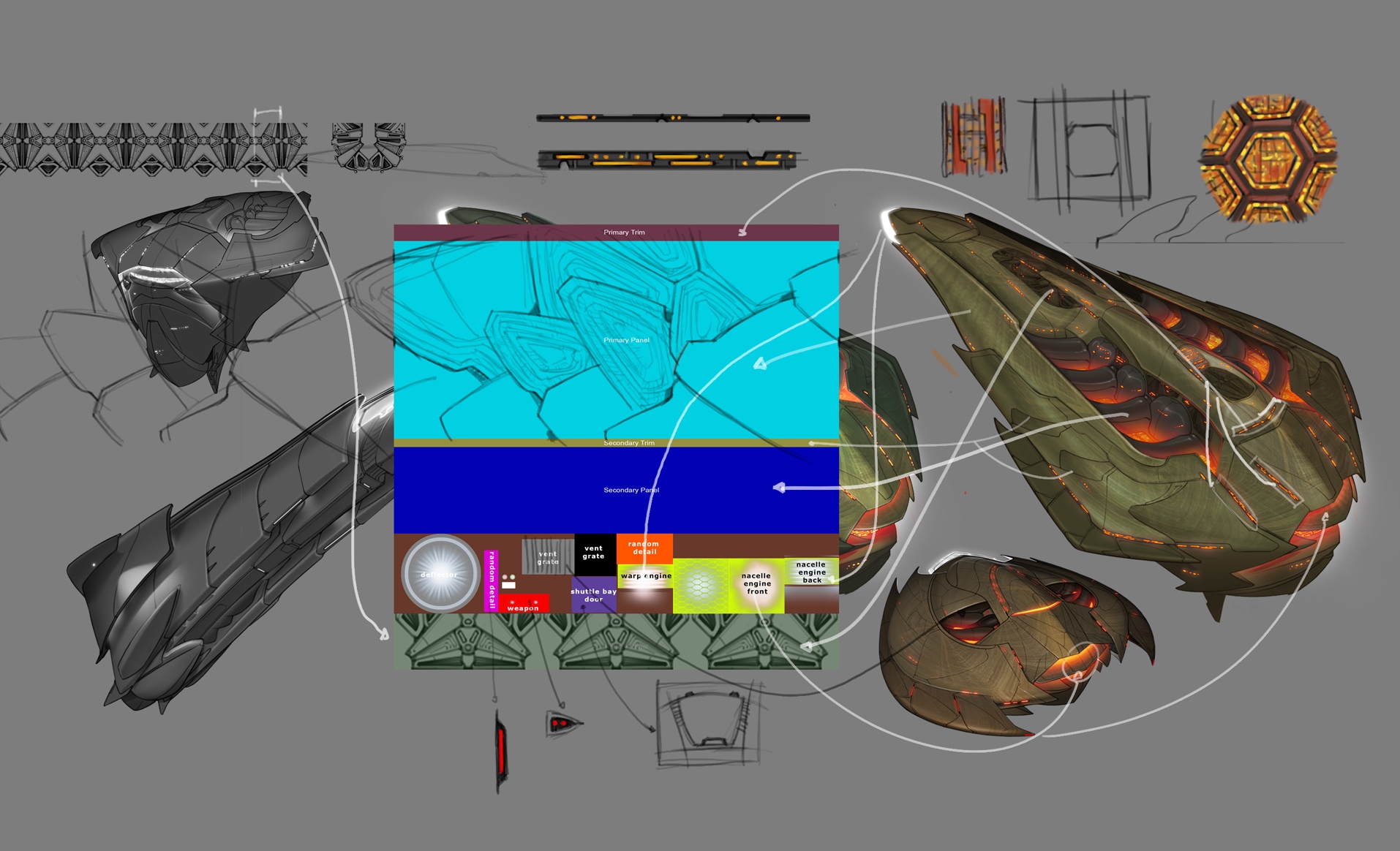 Once we have resolved the placement of where everything belongs and the basic shapes that we need to accomplish we start building all the different sections for the material.

One of the ideas for the Tzenkethi was the use of plates that are similar to strong shells that are used for armor. We looked at Alligators, Crocodiles, turtles, lizards and monitors. The art director even mentioned the basilisk from DnD. This became the most used section for the material. We built elongated shells in Zbrush giving the fleet a very specific look and feel that would make them unique. Every other section was built in 3ds max. We kept in mind the organic lines that we were going for in the main panels and kept straight, geometrical lines for trims and mechanical areas, like grills and plate connections. Nothing is still set in stone as the idea is always to be able to move pieces and details to make the most of the texture size that we can use.

Once all the modeling is done we create 2d textures based on the geometry that was built. The most important aspect at this point are ambient occlusion, material ID, and a normal map. There are other ones that we use like a cavity map, Height map and other ID maps. 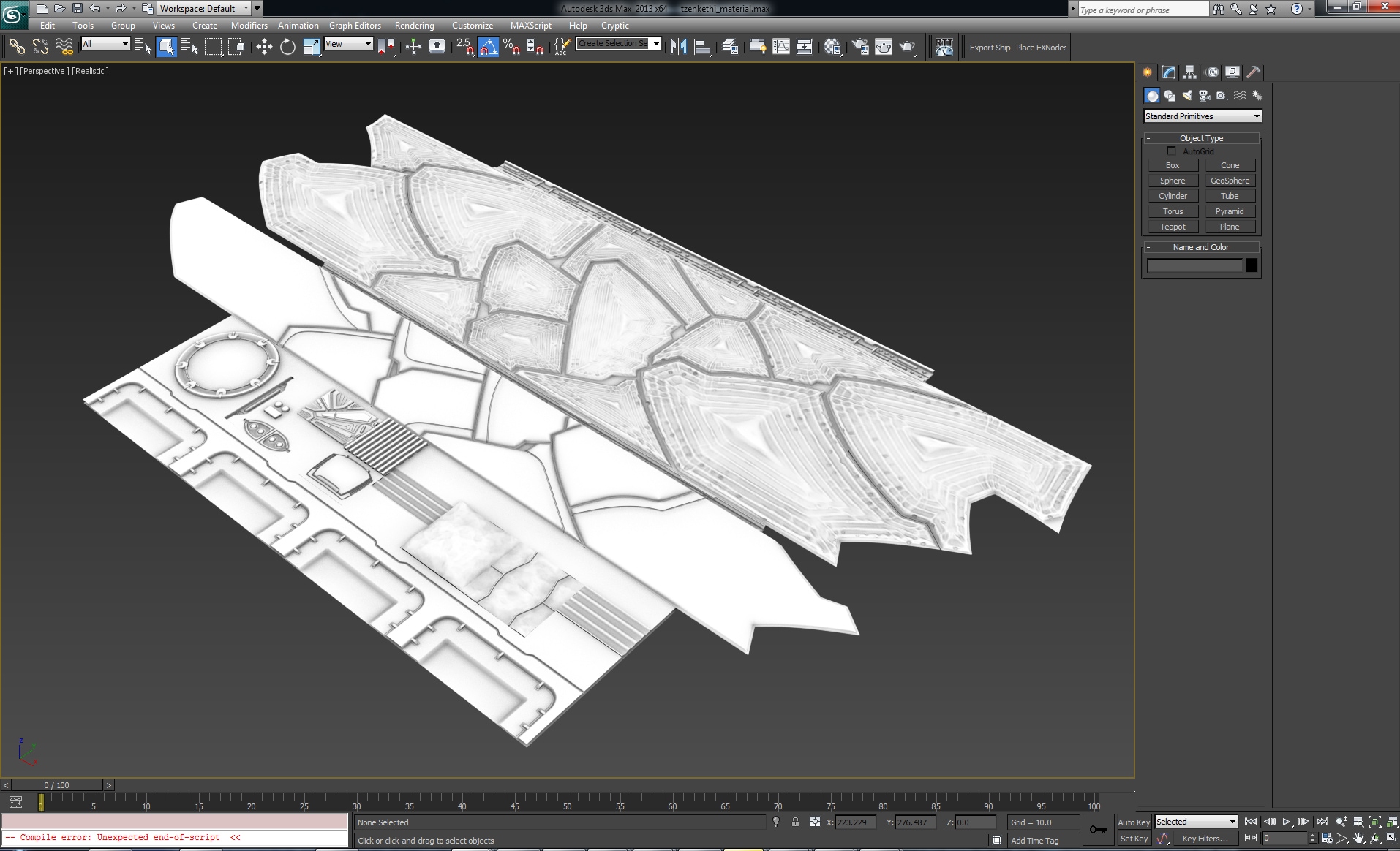 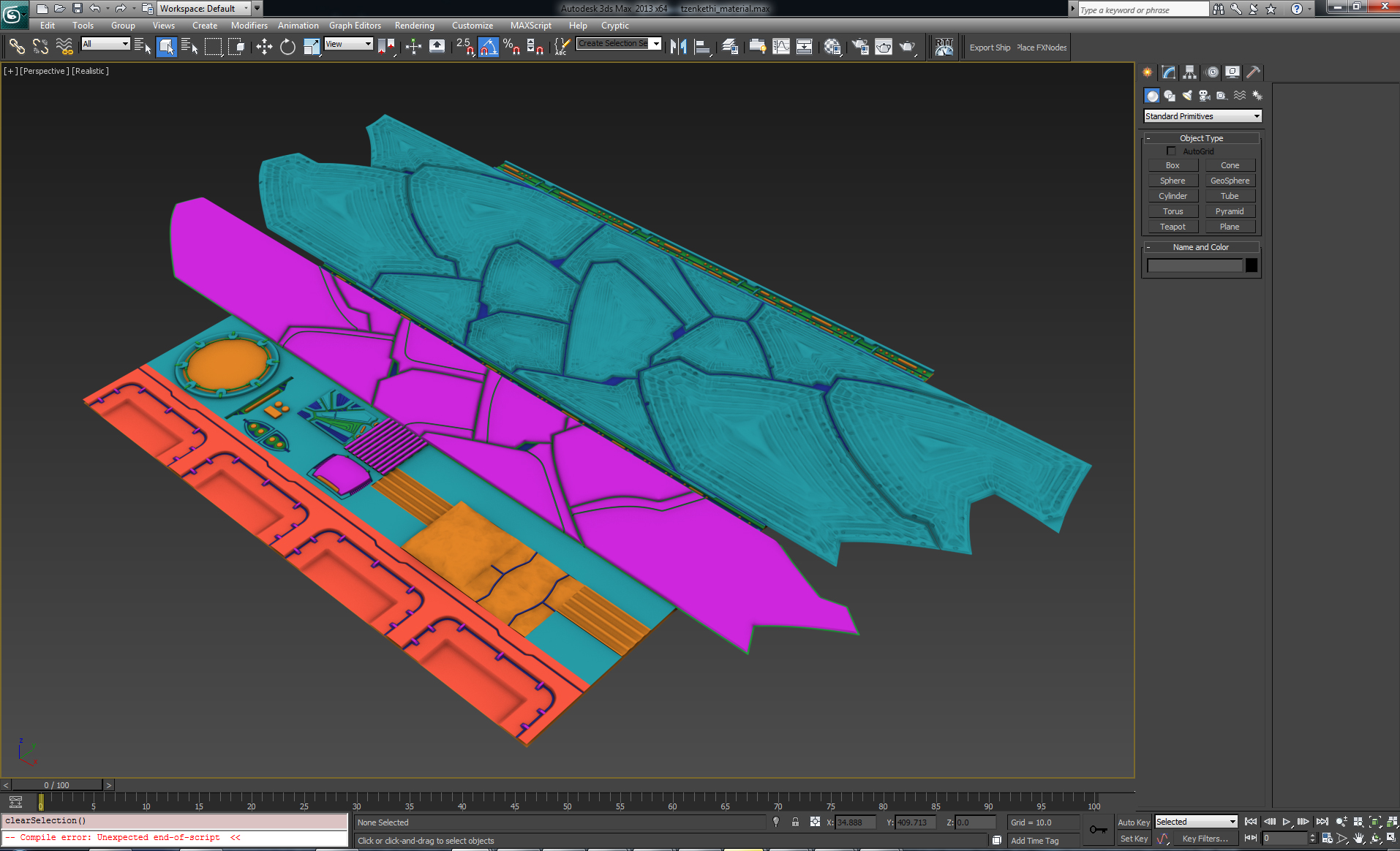 The source files that we created are brought into Substance Designer. Here we will combine them to create the actual material that will give the Ships their look. We look into all the specific properties that make each section of the ship so unique. It might be the undertones under a metal, or the way light travels over a semi dull surface. There is also room to create something unique, like the way the armored shell would behave. When you look at a beetle, you can perceive iridescence, so we wanted to place some of that on the material in just the right way to represent organic life under the armor. Combination of Materials in Substance Designer

A separate material that we need to create is a sheet where decals, windows and lights are placed. This will be applied over “floating geometry” that slightly hovers over the 3d model for the ships. The outputs that we have out of Substance Designer are 4 textures: a Diffuse map that has a reflection map in its alpha channel, a Normal map, a Luminosity map and a Color Specular map that has a Gloss map in its alpha channel. The reason for using this system is so that later on, when changes need to be made or materials need to color shifted, it is much easier to go back an tweak properties. Once the basic material was created, we started working on the actual 3d models for the ships. The first one we built was the battleship. We started from a 3d sketch that Hector Ortiz originally built while brainstorming the ship's overall shapes. It is an excellent guide, and makes our job much easier. We would still spend most of our time refining shapes, looking for how all the parts intersect and making sure that the volumes are represented as well as the final concept. Something that we also look at is how shapes and lines blend / follow each other. This will make for a cohesive object that can be looked at from different angles and look plausible.

We designed the battleship with a bulky front and a slender tail. It gives it a menacing look. The front has “multiple mouths” that make it quite intimidating. Front view of the battleship. Underside of the battleship

The Tzenkethi Dreadnought was our favorite ship to build out of the three.. We really like the hammer head look and how the light travels across the entire wing span. The most complex piece to build was the swooping lines on the front, and how they intersected with the wings. All those crevices had to intersect and have room for the lights to show through.

We had some freedom designing the decals, but once we had them in place, we got a second opinion from Hector and minor tweaks were done to them.  It is always good to have a second pair of eyes to look at your work. That way you can truly improve on things. Top view of the Dreadnought 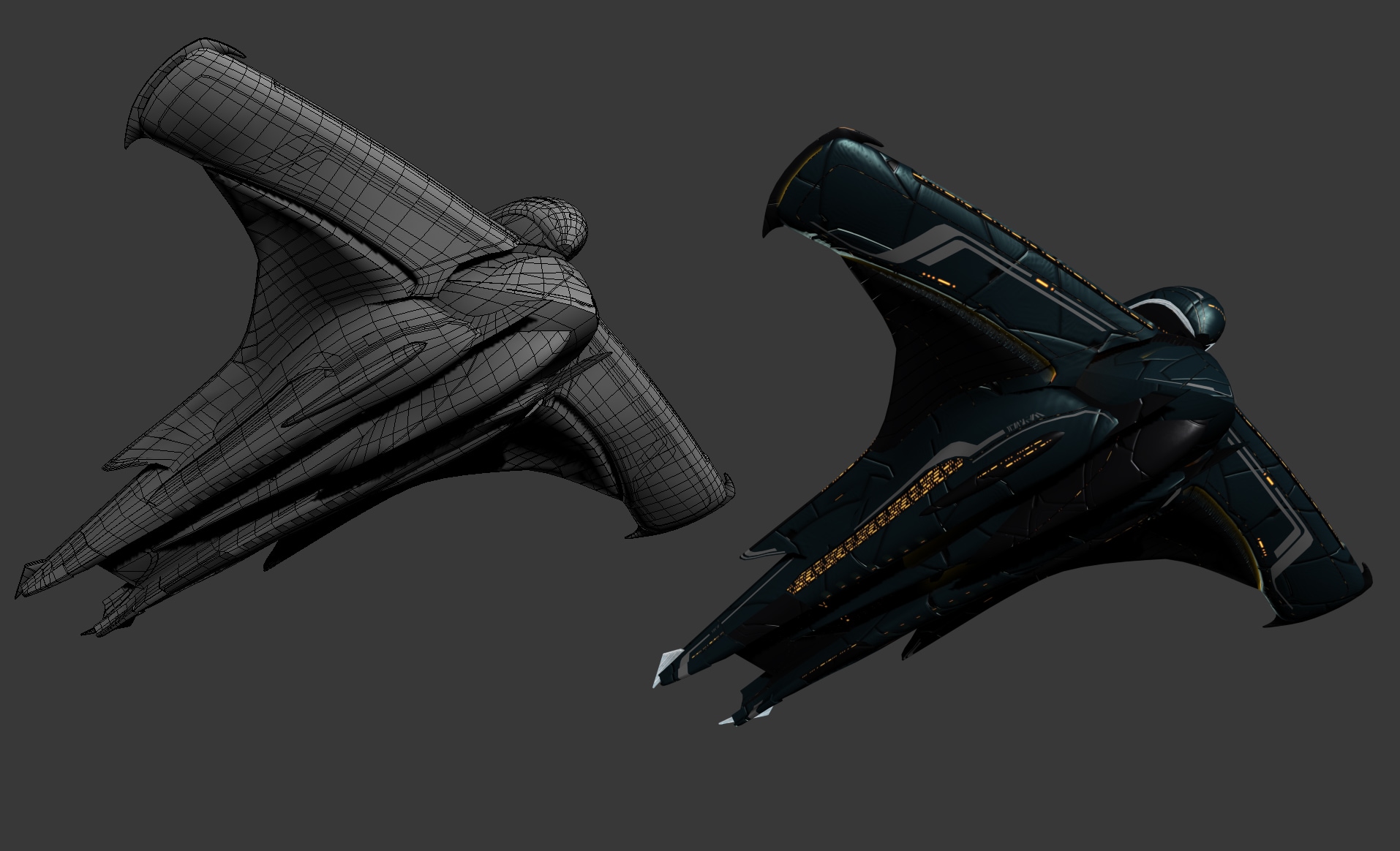 Bottom view of the Dreadnought

The Tzenkethi drones didn’t take as much time to make as the battleship or the dreadnought.

We started by looking at early sketches that Hector made, and sent an email out to the ship team to see what people liked and what changes we could make. It had a kit bash approach to it, and after building a couple of big ships you get a better idea about what makes the Tzenkethi ships unique.

Because they are so much smaller, they need to be able to read from much farther distances. So the silhouette has to be simple, yet still have interesting parts to look at. 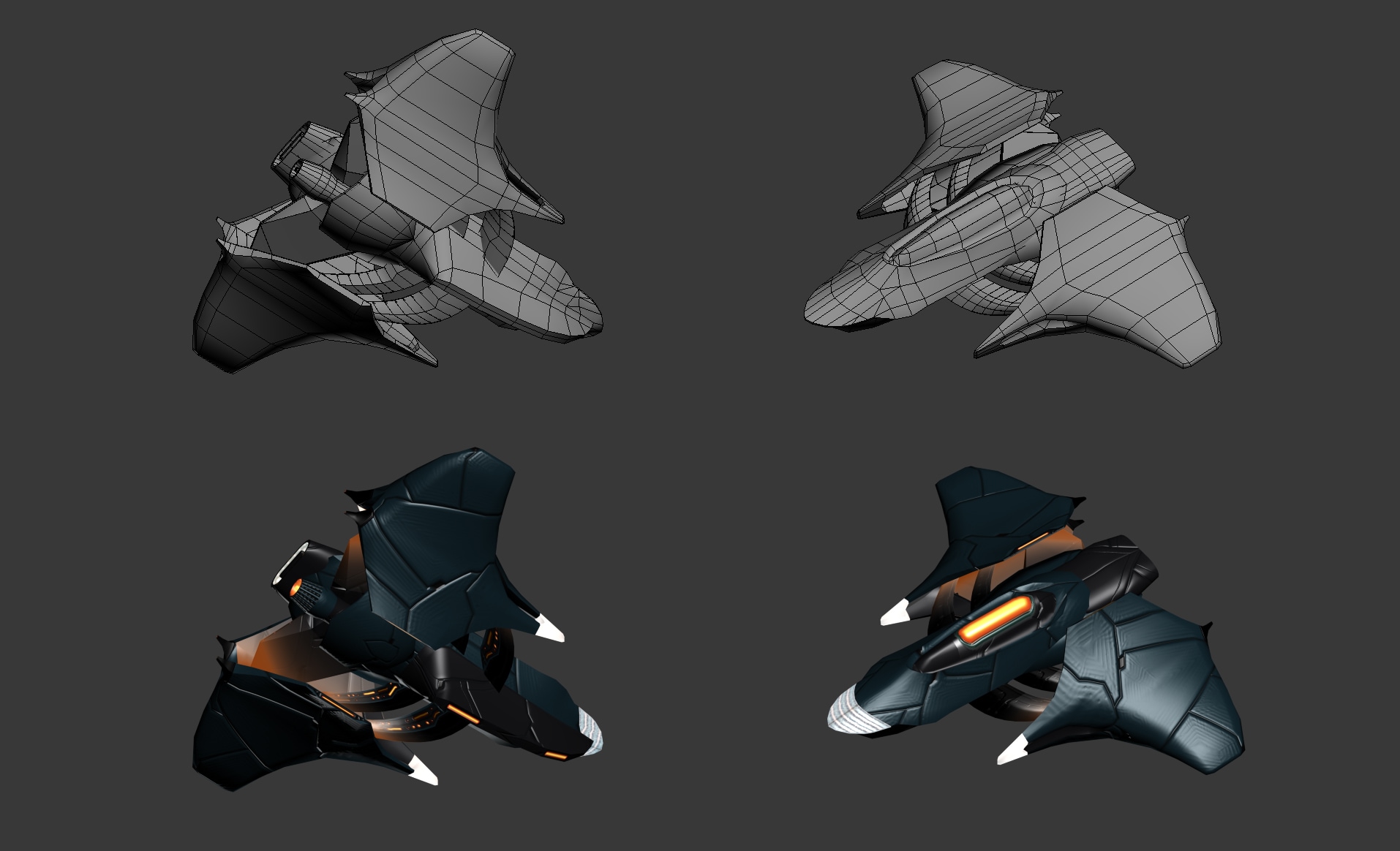 One of our favorite aspects of this design is the glowing lights that you see in between the different sections. It's what make these ships come to life. There are also blinking lights and rotating materials that support this idea. One of the last things that we implemented were the decals. They support the overall line work and give the fleet another layer of complexity. 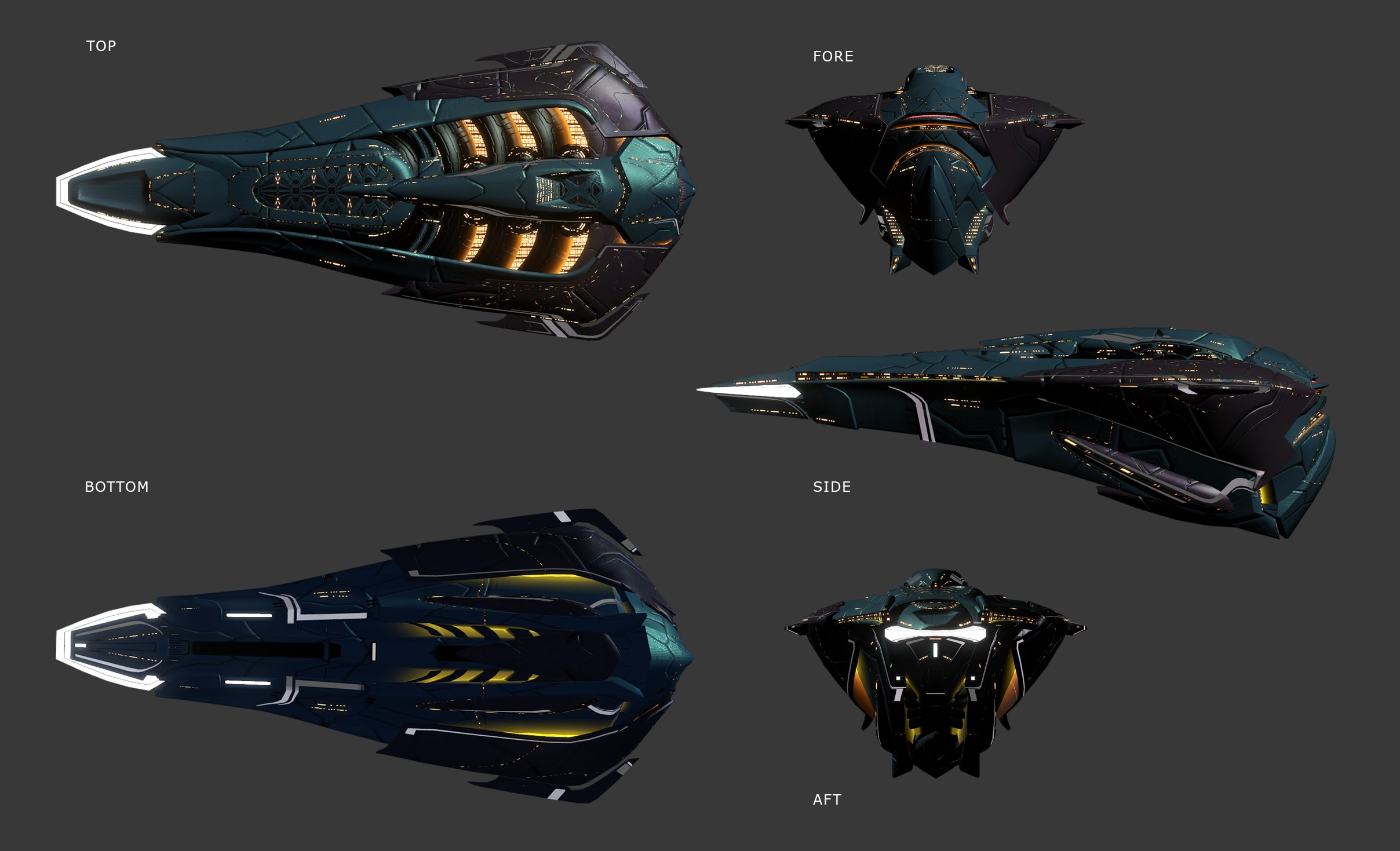 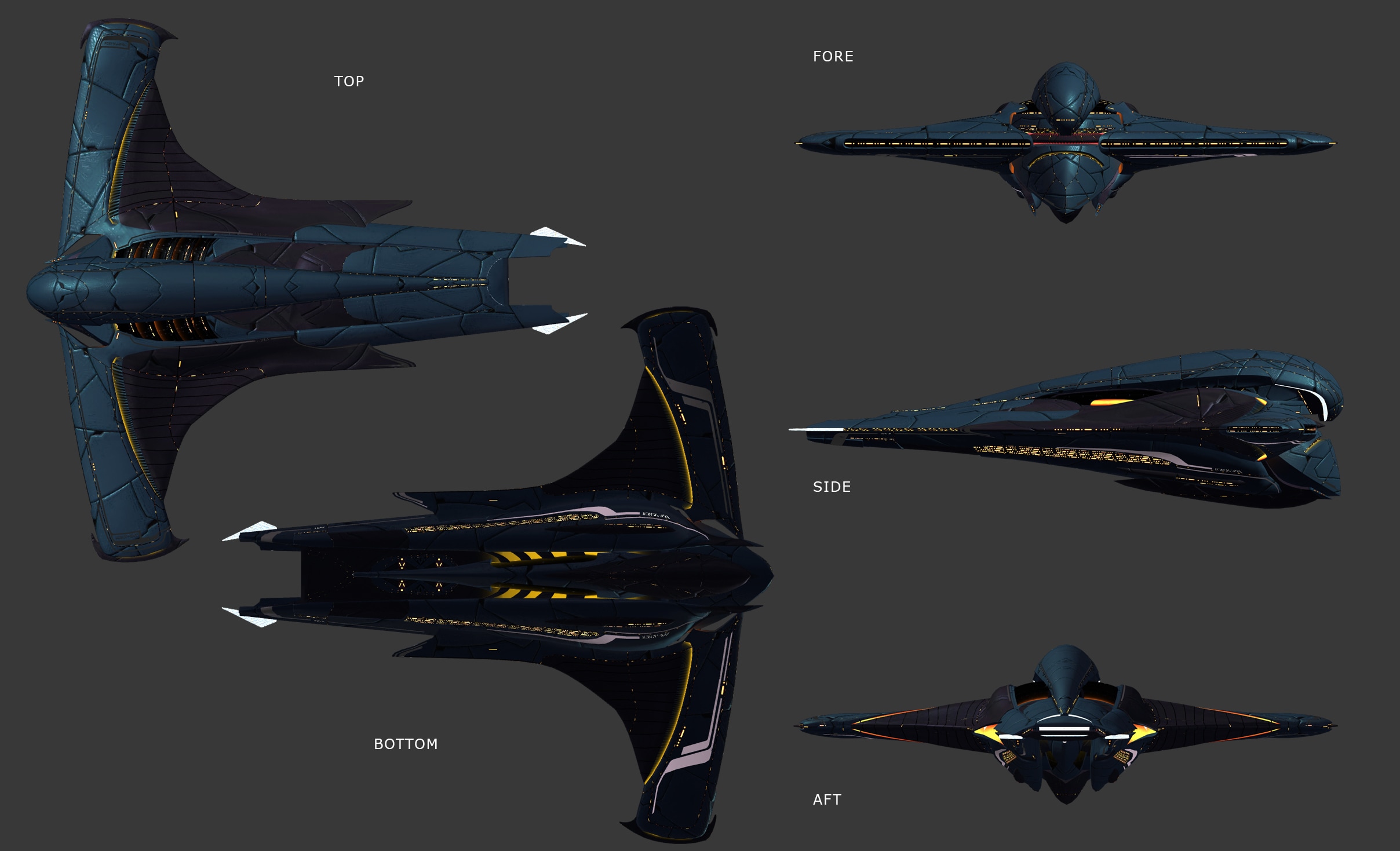 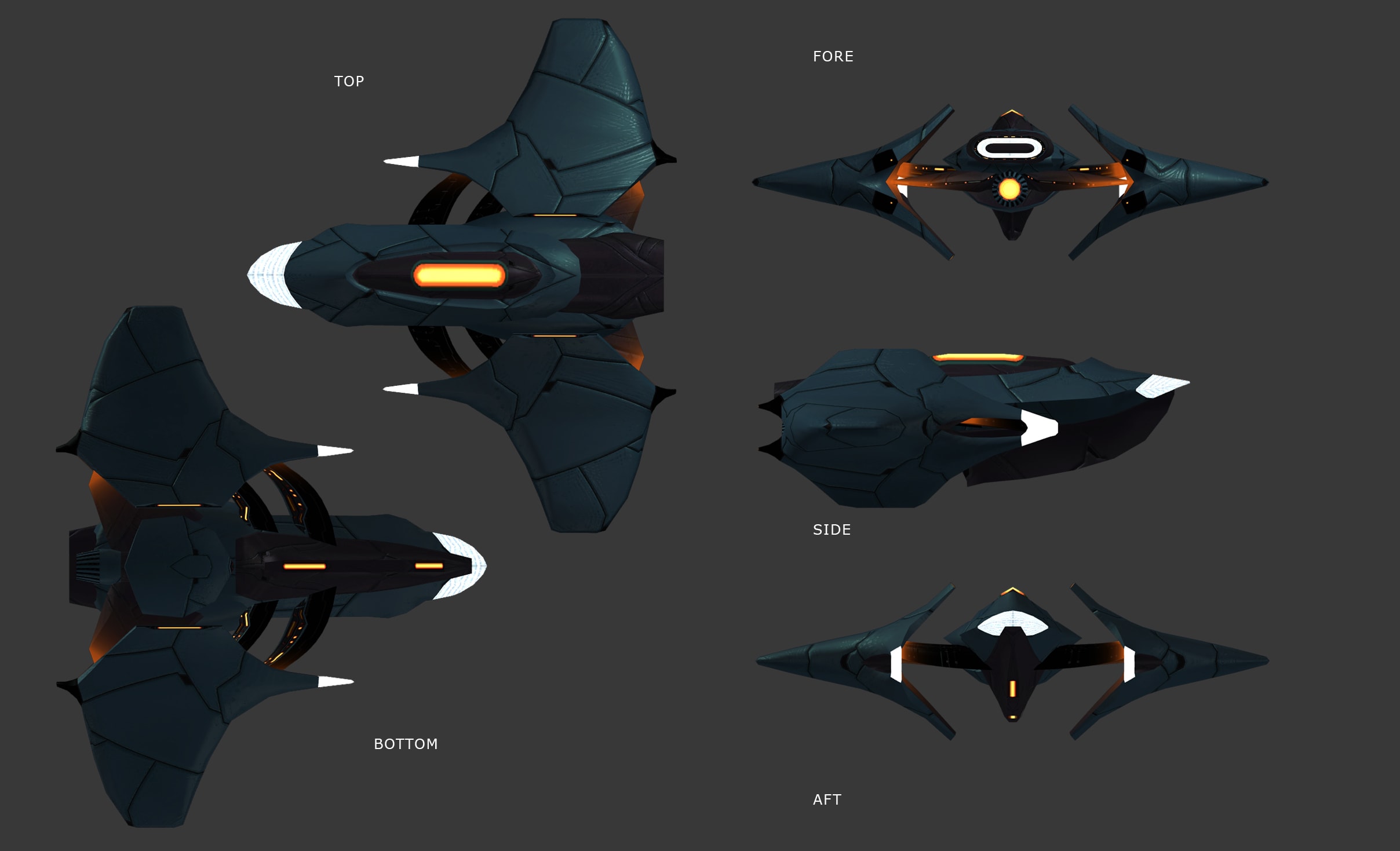 Once the model is done we need to place all the nodes that will display the impulse trails, warp trails, phasers, cannons, torpedos and special effects. All those effects have been specialy created to make this fleet unique.

We also had to create two lower polycount versions for each one of the ships' 3d models. This way, they load into outer space at far distances without having to display all the polygons that you see upclose.

Once that is completed, we can run a batch file that brings all the parts into our engine and then we can hook up all the sections together to create the final assets! 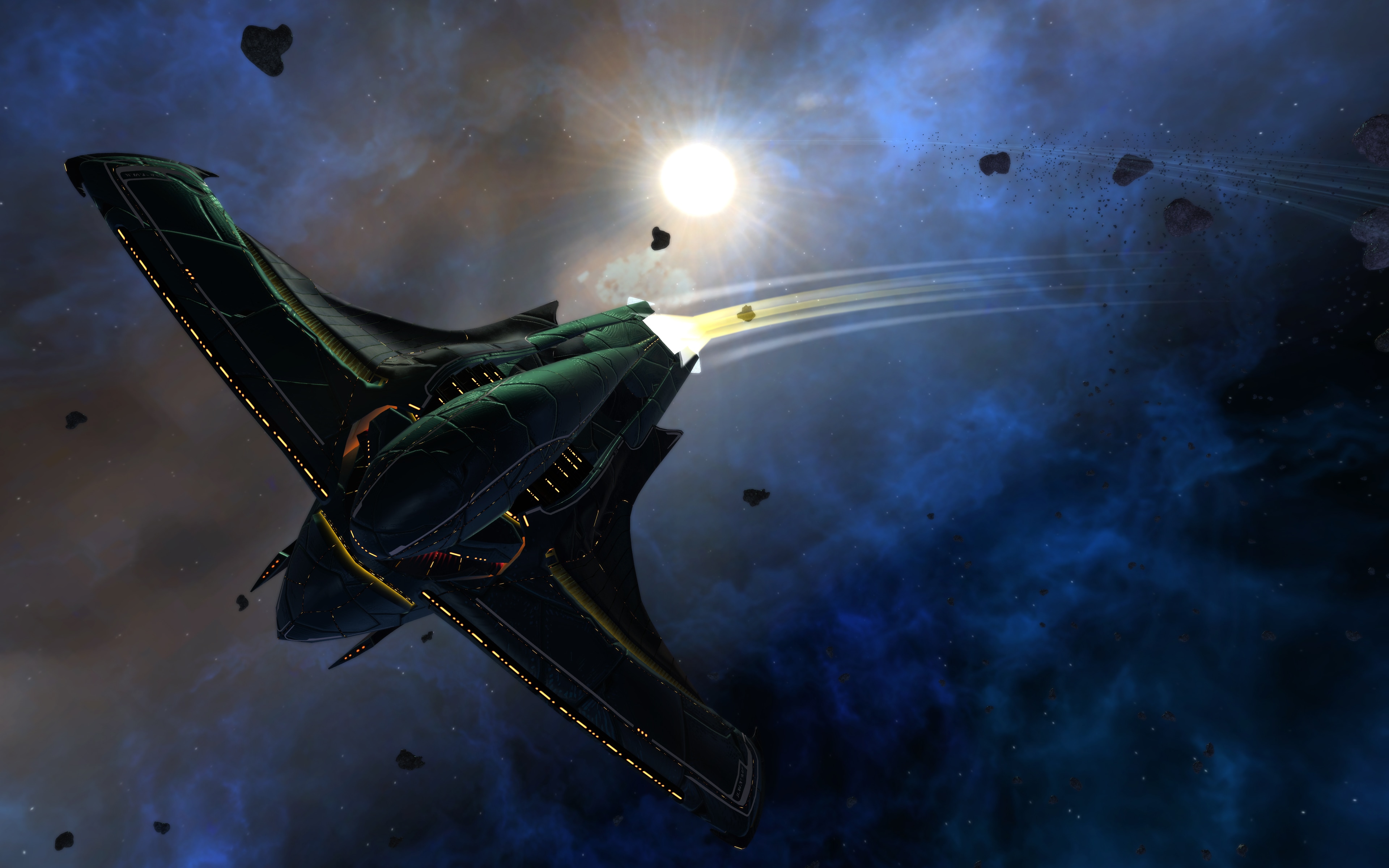 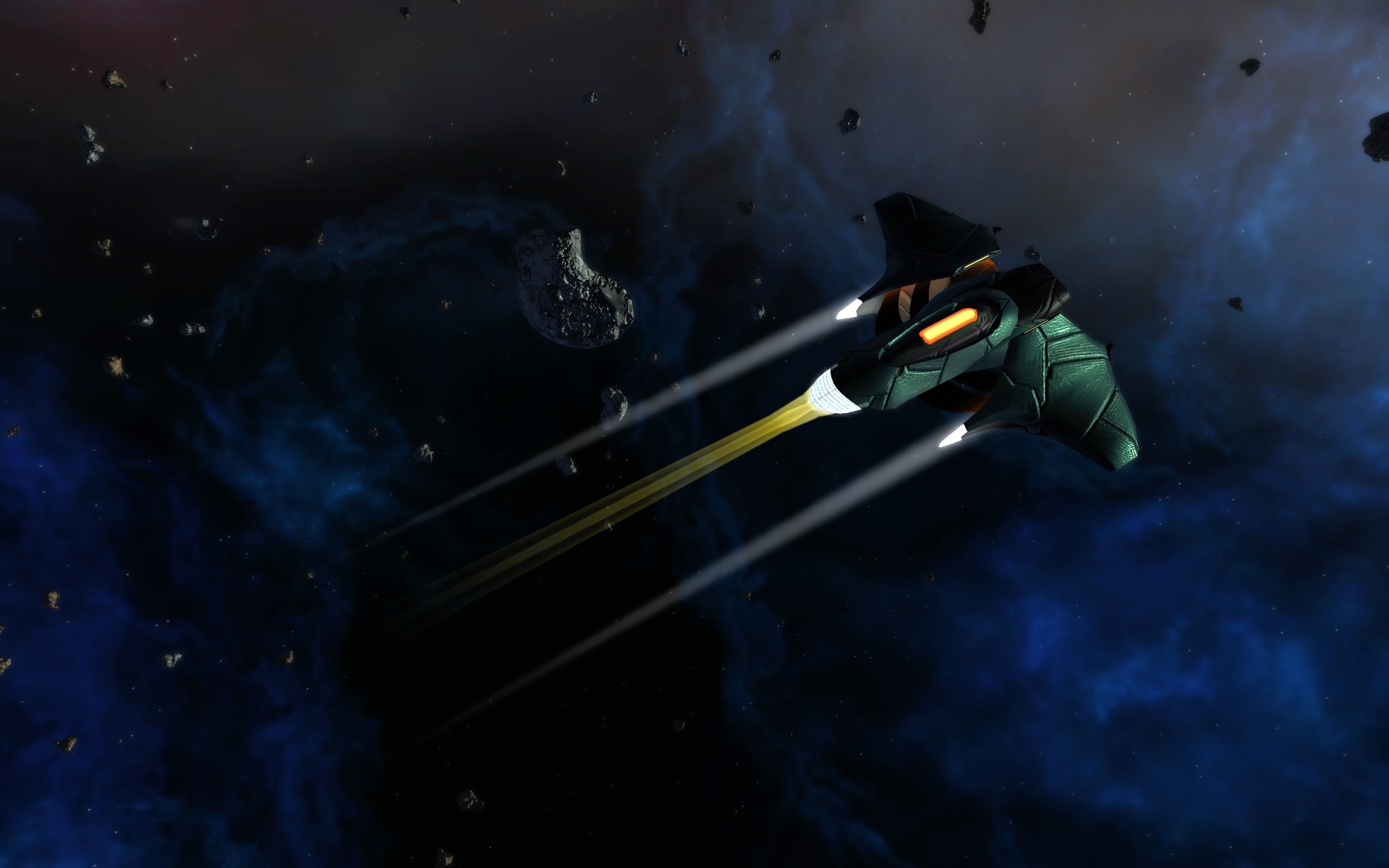