We’re excited to announce that purchasing qualifying Packs for Neverwinter will now get you the Andorian Starter Pack, which includes two free items in Star Trek Online, along with several free items in other PWE games.

Not only is this an excellent opportunity to get something for free in Star Trek Online, but it’s a limited-time chance to get a great deal on some of the most compelling in-game items that Neverwinter has to offer. Simply purchase special Neverwinter Packs today, and you'll receive an email that contains all the codes (if applicable) and instructions you’ll need to unlock everything below, at no additional cost. If you have already previously purchased one of the qualifying Packs, you’ll receive the same instructions.

Now, on to all the items you'll earn in STO - for free! The Andorian Starter Pack contains: The Andorian Kumari Escort line is named in honor of the first Andorian Battle Cruiser, the Kumari, captained by Commander Thy'lek Shran in the 2150s. The Andorian Light Escort is a lightweight vessel that uses a similar design to Shran's Kumari, but comes equipped with the latest developments in Federation technology. The Kumari line's integrated Wing Cannons are among the most powerful weaponry ever seen in the Alpha Quadrant, designed to deliver powerful bursts of Phaser energy too quickly for an enemy vessel to recover.

The Andorian Light Escort comes with an additional fore weapon slot compared to other ships of its size. This weapon slot is equipped with Light Kumari Phaser Wing Cannons, powerful weapons that scale with the user’s level. This ship unlocks for all Federation characters on an account.

* One fore weapon slot is occupied by Light Kumari Wing Cannons. This weapon can be removed and replaced by a different weapon, but it cannot be equipped on ships other an Andorian Light Escort. Only one may be equipped per ship at a time.

After claiming the Andorian Starter Pack from the ‘Bundles’ tab of the C-Store, if you discharge the ship or wish to claim it on alternate characters, please visit the “Ship Requisitions” contact in a shipyard. 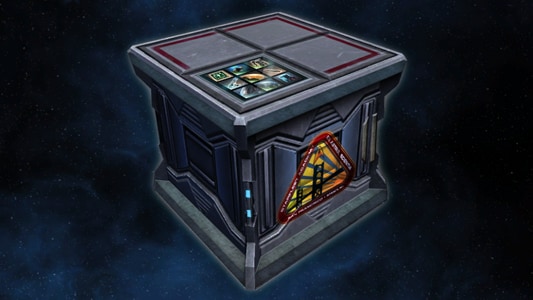 Starting a new Federation captain and want to launch their career at warp 9? The Federation Starter Pack will allow you to enter the Alpha Quadrant with all of the gear you'll need to take on the Klingon Empire! This starter pack unlocks only once per account and can be deposited in your account shared bank so another character on your account can withdraw it and open it.

What's included in the pack:

Act now before this deal warps away!