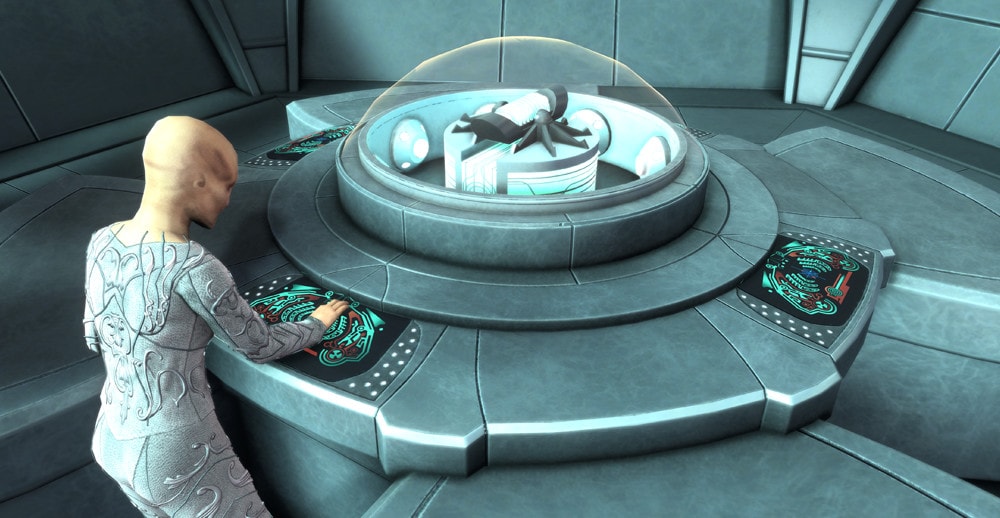 The lab was quiet, and dimly lit but for pools of light over the consoles and tables, in typical Sphere Builder fashion. Only a quiet hum disturbed the silence.

Teres, a Sphere Builder engineer, stifled a yawn as he initiated the activation sequence for the deep field manipulator.

She was interrupted by the beam of an energy weapon ripping past her, striking the console. It exploded in a shower of sparks, knocking her back onto the floor. Stunned, she turned and looked unto the face of Romal, another one of the engineers assigned to the project.

Teres and Ghera raised their hands, Ghera somewhat dazed. Teres shook his head and looked towards one of the nearby walls as it slid open, allowing formerly concealed security forces to come dutifully pouring into the room. As Romal gaped at the new arrivals, the lead security officer pointed a weapon at him before speaking, a grim look upon her face.

“Romal, you are under arrest for the charge of high treason.”

Trials were rare among the Sphere Builders. As refugees trying to find their way home, the people who were once the Tuterians tended to bond together closely, with a powerful shared ideology.

But today was an exception. And given the gravity of the crimes, it seemed every Sphere Builder in their pocket of subspace had turned up.

Romal stood in the center of a huge open chamber. A bright light shone down on him, illuminating him and blinding him to the faces of the audience, packed into seats beyond the circle of light.

Three Sphere Builders sat on the dais above him, lit by a softer and more flattering light, less accusatory. Their faces were serious and grim as they looked upon him. The chief, in the center, began the formal questioning.

“Are you the being known as Romal?”

“Do you believe yourself to be mentally and emotionally fit to stand trial for the crimes of which you are accused?”

“Do you understand the charges that have been brought before you?”

“Do you dispute the evidence that has been presented? That you knowingly and willfully sabotaged the Return Home Project?”

A gasp from the crowd hidden in darkness. Romal was glad he could not see the accusing stares, but he could feel them all around him.

The chief sat back in his chair.

“Well then. Do you have anything to offer in your defense?”

“I claim innocence by right of conscience.”

Another gasp ran through the crowd, this one louder and more aghast. There were even some mutterings, “Monster,” “Despicable,” “A mockery”.

He ignored them and began his testimony.

“I was assigned to the Analytics and Evaluation department of the Homecoming. My role was to evaluate the successfulness of interventions in test universes.”

“I think we are sufficiently knowledgeable about the Homecoming,” said the judge on Romal’s left. What does this have to do with your right of conscience?”

“Very well. I will skip ahead. The day things changed for me, I was working on Universe 2647.43.21.753c. I had conducted the baseline metrics on the universe previously. It appeared to be an excellent candidate. Laws of physics nearly identical to our universe, proper galaxy development, and favorable quantum field density. In fact, it seemed so close to ours, I shared the information with some of my colleagues.”

“When I came into the lab that day, I found them clustered around a terminal, watching a domestic scene featuring creatures that looked very much like our former selves.”

“My colleagues tried to appear disinterested. But I could see the hunger in their eyes, hunger for a return to normalcy and the banality of physical existence in our former universe.”

“Enjoying our cousins?” I laughed. From time to time, my colleagues would watch such findings. A poor substitute, perhaps. “Let’s see how they are doing now.”

“Now, I fully expected them to be fine. Changed, perhaps, but fine. But when I loaded up the most recent data, there was nothing. I mean, nothing. Blackness. I focused the quantum focal lens, tightening the scan range. And eventually, I found something. Hydrogen.”

“That was it. Every molecule, every atom in the universe had been ripped apart, leaving behind only emptiness, filled with a gas so thin and spread so far it could never hope to coalesce into a star. It was like looking right out at the heat death of the universe.”

“My colleagues went silent in shock at first. Then they began to excuse themselves one by one, suddenly remembering urgent work elsewhere. When I was finally alone, I put my head down on the table and wept. For these ‘cousins’, yes, but mostly for us. That we should so callously destroy not just a world, not just a galaxy, but an entire universe in our quest to return home. I thought to myself, what have we become? And I realized I could no longer sit idly by as we destroyed.”

“I tried to discuss it with my colleagues, my friends, my mate. They were appalled at my suggestions. Eventually, I saw that I would have no choice but to take direct action. Nobody was hurt. I regret nothing. I did as my conscience dictates and for that you cannot convict me.”

The chief asked, “Are you done?”

“Feran? Are you prepared to present your rebuttal?”

Feran, the Advocate for Society, rose and walked into the middle. A podium rose out of the ground before him, and a bright light shone down on him. The light on Romal faded and yellowed, but did not fade completely.

“Yes, chief. Romal claims he acted on behalf of this universe, saving lives and so forth. But did he? As far as our data indicate, there is either an infinite number of universes, or so great a number as to be effectively infinite. In the face of numbers so large, the destruction of one, or two, or five, or a hundred, is effectively null. There is another universe just like that one. In fact, if the multiverse is indeed infinite, there are infinite universes like that one.”

“Further, were those people real? They existed outside of our reality. Therefore, they are, to us, by definition, unreal. And we didn’t deliberately destroy their universe. It was simply an effect of our experiments. It could have just as easily improved their universe as destroyed it.”

“Finally, do we not have a right to return home? We were all but exterminated by the Alliance and its allies. We fled their actions, only to find ourselves trapped in this pocket of space. Do we not have the right to try to set things right for our people? And if a few universes are altered or, yes, even destroyed along the way, this is perhaps the price we must pay. There can be no higher priority. This is the very cornerstone of our culture.”

“You are out of order, Romal. It is not your time to speak. You have had your turn.”

“Very well. But I will not stand here and listen to these lies. How many universes have been “improved” by our interventions? How would you even measure such a thing? By whose standards are they improved?”

“Enough. Remove Romal from the chamber. He may await his sentence in his cell.”

In the dim light, Romal contemplated his fate. He hoped for the death sentence. He was ready to die for what he believed. What he could no longer endure was the knowledge of his role in the deaths of so many beings. So many worlds.

His mate, Kiwak, came to the bars with a sumptuous feast.

“I’m afraid not,” she said, “It sounds like life imprisonment.”

To a transdimensional being, life imprisonment could be a very long time, indeed.

She set the tray down, and backed away. The guard came over and inspected it. While he was inspecting it, she shot him in the back with an energy weapon.

“Kiwak, no, what are you doing? I don’t want you wrapped up in this. You don’t even believe in what I have done.”

“No, Romal, I don’t and I can’t pretend I understand. But I believe in you and I know that this is what you believe is right. And I’ll be damned if I will let you suffer for the rest of your life in prison for it.”

“But now you will be prosecuted as my accomplice.”

“And where will I go? I cannot remain here. And all the universes are death for our kind.”

“Death is a kinder future than the one they have prepared for you. Flee, my love. And may you find peace.” She activated some kind of device and the world melted away.

When the world returned to him, Romal found himself in a shuttlecraft, in “normal” space - that is, the space his people had left behind. A field had been constructed to mimic the environment of his transdimensional realm. But he could tell the cellular degradation had already begun.

“Not much time,” he said. He loaded the astrometric and chronometric displays, attempting to locate his position in space-time. He appeared to be just outside a region known as the Delphic Expanse, in the year 2410, in the Federation way of counting.

He set a course for the Sol System. He knew he would never reach it alive. He hoped he would encounter a vessel along the way, and hoped that vessel did not simply shoot him on sight… and that he was still in condition to communicate with the vessel’s occupants.

But mostly, he hoped. And to have hope again was in itself a blessing.