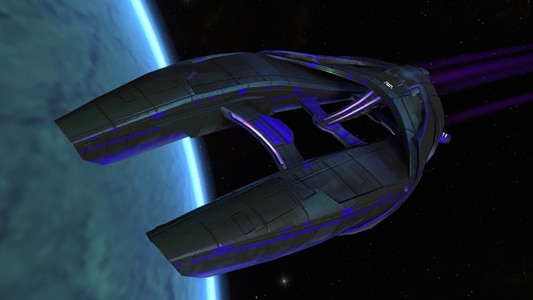 Although lounging in the sun on a beautiful beach, or wandering a jungle path in search of a hidden Horga’hn, may feel rewarding enough for some captains, we know that our players have come to expect big things from Star Trek Online’s seasonal events. This includes prizes and souvenirs that grant a sense of accomplishment when earned, and that Captains can take pride in when showing off to their fleetmates and friends. And so, with the introduction of the Risa Lohlunat Festival, we have endeavored to provide many prizes and activities to meet those expectations.

Participating in the tropical festivities of Risa’s Lohlunat Festival will reward players with Risian Lohlunat Pearls and Lohlunat Favors. These special tokens are used during the Festival as a symbol of your understanding of the Risian culture of “what’s ours is yours” and can be traded in to earn various rewards. 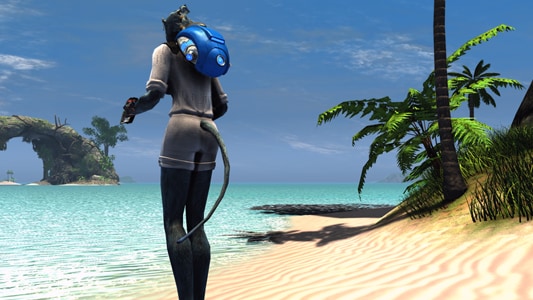 Players below level 50 will find that they are now able to open and access the Reputation UI for the first time since its introduction, but will be limited to interacting only with their Event Reputation. This will allow players of all levels to participate in the Lohlunat Festival’s activities, and redeem their rewards directly through the Event Reputation system. To go along with the new Reputation Project being offered alongside the Risa Summer Event, all players will find they now have a second project slot available under their Event Reputation tab. This allows players that may have a project from a previous event still in-progress (e.g. Crystalline Entity) to participate in the Risa Summer Event without needing to worry about freeing up a project slot.

Lohlunat Favors can be redeemed either by visiting a local vendor located on the boardwalk near Risa’s resort, or by unlocking and accessing the Store directly from your Event Reputation UI. In order to unlock this store, you will be directed to complete a Reputation Project which requires one Favor and will complete after a few short seconds. Fortunately, all captains will receive one such token as a free gift upon their first arrival at Risa’s resort, and a brief tutorial will guide new captains through the process of using their Reputation UI. Once your store is unlocked, it’s time to earn more Lohlunat Favors!

Players will be able to participate in the Dance Competition and the Horga’hn Hunt in order to earn Favors. Each of these activities rewards incrementally, allowing you to participate and earn prizes even if you aren’t present at the moment they begin, and both activities are available twice per hour allowing plenty of opportunity to join in on the festivities. The Dance Competition will reward more and more Favors for each successful set of dance moves performed, and the Horga’hn Hunt offers a chance to find Lohlunat Favors with each Horga’hn you uncover while offering an additional bonus prize if you obtain a full set while the Hunt timer is active.

Lohlunat Favors may also be purchased using Lobi Crystal. The price will be 5 Lobi Crystal for a package that offers between 10 and 30 Favors for you to spend on Lohlunat Festival souvenirs. 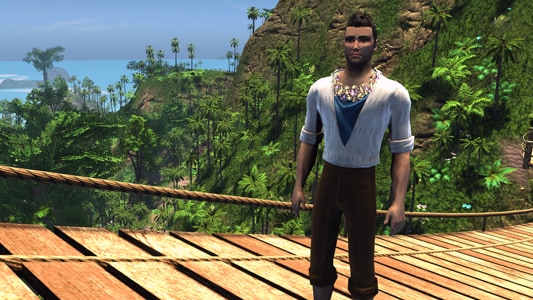 Once you have amassed your fortune in Favors, it’s time to sample some of the many delights that Risa’s Lohlunat Festival has to offer. With prices ranging from just 5 Favors up to 1,000 Favors, you will be able to obtain a full range of souvenirs regardless of your budget. Lohlunat Favors may also be traded in at a special terminal in the Resort, in exchange for Gold-Pressed Latinum. This same terminal will also be offering new costume options perfect for the sunny beaches of Risa – eyewear that resembles the protective Sunglasses seen in use by the locals and other visitors. These Sunglasses will also be available for purchase wherever Gold-Pressed Latinum is traded, but will not be available for purchase once the Summer Event has concluded. (NOTE: Due to facial geometry limitations, this eyewear cannot be worn by Caitian, Ferasan, Saurian or Gorn captains. We apologize for the inconvenience.)

Risian Lohlunat Pearls are a rare and symbolic commodity. They are only harvested once annually, when the lunar tides of Risa cause the native mollusks to open and present them to the sea. The natives of Risa exchange these special Pearls as tokens of generosity and hospitality, and are now allowing visitors to participate in this ritual. In exchange for participating in a daily festival activity – the Floater flight challenge called “Flying High!” – players will earn a package of 40 Risian Lohlunat Pearls. Once you have amassed a total of 1,000 of these Pearls, they can be input into a new Event Reputation Project to earn a brand new Risian corvette starship!

Although the Risian Lohlunat Summer Festival will continue to be available well into August, Lohlunat Pearls will only be offered as a reward from “Flying High!” for a total of 35 days, starting June 27th and running until August 2nd. During this time, players will need to participate 25 times in order to earn their FREE Starship. Additional Risian Lohlunat Pearls can also be acquired from the Lobi Store. The price will be 5 Lobi Crystals for a package which contains between 2 and 6 Lohlunat Pearls. Although this is a large investment in Lobi Crystals for players seeking to purchase the ship outright, remember that the price can be significantly reduced by simply running “Flying High!” on a daily basis.

The full stats and abilities associated with the Risian corvette will appear at the end of this Dev Blog.

Between the beautiful, lush scenery of Risa’s newly-opened resort location, the festive activities being offered therein, and the tantalizing prizes being offered in return for participation, we’re certain all starship captains will soon find themselves chomping at the bit for a little shore leave, anxious to take in everything that the Lohlunat Festival has to offer. And keep in mind this is only the first year that the Festival has appeared in Star Trek Online! We look forward to continuing to enhance it even further for future appearances, so it becomes something our players anticipate participating in for years to come.

See you at the beach!

NOTE: Players of all factions must be at least level 10 in order to visit the Lohlunat Festival. Romulan captains must have completed “Memory Lane” before they will be permitted to leave the Tau Dewa Sector Block. 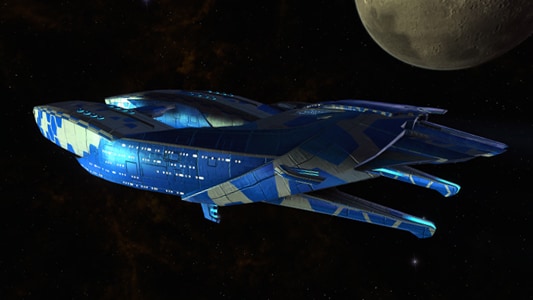 The Risian corvette was initially designed as a racing ship for entertainment purposes. The ship's incredible speed and maneuverability drew the interest of the Lobi Crystal Consortium, who purchased the rights to manufacture armed versions of the vessel. There's a long waiting list for ships from the first Lobi production run of Risian corvettes, and deep space explorers and hotshot pilots traveling through more dangerous areas of space will often put a deposit down months in advance for the chance to acquire one.

This agile ship was designed with one purpose in mind: speed. As such, it is capable of overcharging most standard engines to achieve speeds that other vessels could never hope to match. Its EPS manifolds are custom tailored to bring extra Engine energy to bear, and its sleek design allows for a smaller sensor shadow making it more difficult for enemy weapons to lock on while traveling at high speeds. The Risian corvette comes equipped with a Universal Subspace Wake Generator console. This console allows Risian corvettes to utilize a special type of overdrive circuit in their impulse injection assemblies, allowing for higher sustained subwarp speeds as well as improved boosts of speed. By feeding a sudden burst of energy into these improved injectors, the ship is capable of distorting local subspace in a manner that results in near-warp speeds for a short period of time. This burst results in a Subspace Wake which can be easily modified to cause detrimental effects on enemies caught behind the ship when activated. The subspace distortions will inhibit speed and turn rate, while simultaneously causing hull distortions that damage enemy ships' infrastructure.

NOTE: The above stats are subject to change. The box that the ship comes in, which cannot be opened until the minimum rank listed above, is bound upon pickup. Once unpacked, this ship cannot be reclaimed if dismissed.

We hope you have fun on Risa and enjoy the Lohlunat Festival! We’ll see you in-game.