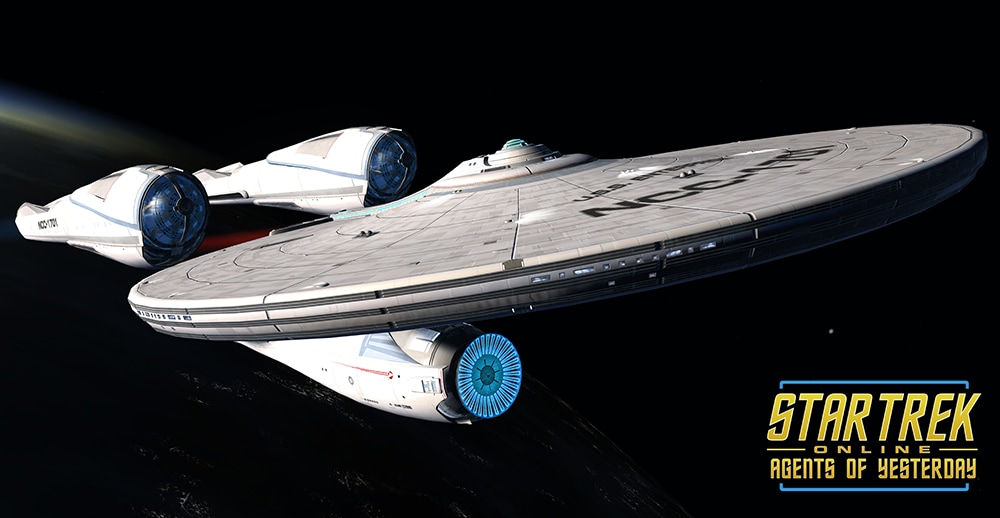 In the midst of the confrontations currently raging across multiple eras in the primary timeline, there have also been incidents of incursions into entirely alternate realities. One such breach has resulted in many artifacts and technological oddities from another timeline getting pulled into our own. A closer examination of this timeline reveals that it is a divergent reality that split from our own as a result of a confrontation in the 23rd Century, between an unknown Romulan vessel that had been displaced from the time stream, and a Federation starship - the U.S.S. Kelvin. As a result of this temporal incursion, the entire timeline that followed those events has come to be called the "Kelvin Timeline."

It is thrilling to finally have the opportunity to include assets and characters from the recently-rebooted Star Trek movie franchise in Star Trek Online. The 2009 film Star Trek, and its follow-up Star Trek Into Darkness, brought Trek back to the forefront of modern science fiction media, revitalizing the franchise with action and style for existing fans, and a whole generation of new ones. Time travel and dimensional shifts have presented us with the perfect storytelling tools to allow such a crossover as something that could reasonably exist within our “prime” timeline.

The Kelvin Timeline will be presented in the story of Agents of Yesterday in the form of a dimensional incursion that your characters, as Temporal Agents, will be tasked with finding a way to set straight. While visiting this alternate reality, players will interact with characters and starships pulled directly from the silver screen. And now, by obtaining and opening a Kelvin Lock Box, some of those same ships and technology can be used to defend time itself from those that would manipulate it for their own selfish gains.

Unlike most Lock Boxes from the past, the Kelvin Lock Box will reward players from each faction – Federation, Klingon, and Romulan – with different starships if they win the Grand Prize.

But there’s more to the Kelvin Lock Box than just ships and their associated equipment! In addition to the ships and technology scavenged from the alternate reality, there are also personnel that have made the leap across the universe’s boundaries and become stranded (for now) in our reality. These brave Kelvin Timeline Federation Officers are willing to offer their considerable expertise as Duty Officers with brand new Active Roster Abilities that are designed specifically to interact with Specialization Bridge Officer Abilities (Intel, Command, and Pilot). A total of 10 exciting new Active Roster Abilities are ready to synergize with your favorite Specialist Abilities, for both Space and Ground scenarios.

The Kelvin Lock Box, and the new offerings appearing on the Lobi Crystal Store, will become available with the launch of Agents of Yesterday beginning on July 6th, 2016.