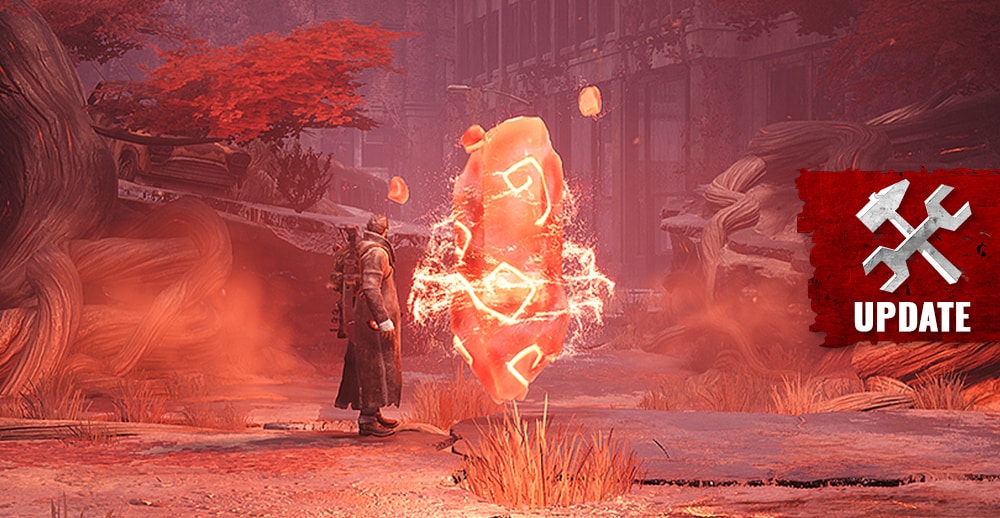 We're preparing an update to Remnant: From the Ashes that will go live on all platforms later today! Read up on the changes now to get ahead of the curve.

DEVELOPER COMMENT: Introducing Adventure Mode - A new game mode that allows players to re-roll individual worlds. You and your party can embark on an adventure through dynamically generated Earth, Rhom, and Yaesha, beginning at a single World Stone and ending once you’ve defeated their World Boss. Dungeon locations, points of interest, enemy spawns, and more may be different than what you’ve come to expect from the main campaign. Activated from the World Stone in Ward 13, simply choose “World Settings” and select the “Adventure Mode” option to pick the world you would like to roll. This will not replace your campaign progress and can be re-rolled freely without affecting your story. Any items found or traits gained along the way will be kept by your character. More content, including Corsus, will be added in the future!

DEVELOPER COMMENT: While this is the smallest section, it received the most amount of focus. We are always working on additional optimization and stability measures. For this update, we’ve done numerous passes on each area covering memory footprint, stability, lighting, collision, and a host of other fixes to help smooth out the gameplay experience.

DEVELOPER COMMENT: In addition to optimizations, many smaller bugs have been addressed.

DEVELOPER COMMENT: Two of the biggest requests have been to make it harder to delete your character and giving more control over the controller dead-zone. We’ve addressed both and are working down the (huge) list of additional QOL features! A few additional fixes snuck into this update and we look forward to addressing more and more requests over time.

DEVELOPER COMMENT: General feedback has been that Nightmare Mode is a bit bullet spongey. We reduced the total amount of HP boost to help with this, but we know that with updated armors it will be less of an issue. We are working hard to update values across the board which work with new armors and item updates while still maintaining the challenge. Look for this to be worked on over the next few updates as we lay the groundwork for even harder difficulties (with rewards!).

DEVELOPER COMMENT: Hunting Rifle is in a good spot, but we wanted to give it just a little bit more love and home in closer to its intended identity.

DEVELOPER COMMENT: Hunting Pistol is meant to be a very strong mid to long-range option, so we increased its critical chance while limiting the minimum crit range to 5m or farther. This allows even bigger hits at range and allows accuracy up close without becoming a single shot “shotgun”.

DEVELOPER COMMENT: The identity of the Revolver is massive staggering hits. It now has a bit more kick, but we are also monitoring the damage output and overall effectiveness of the weapon.

DEVELOPER COMMENT: Sniper Rifle has also gone through many changes. We want to home in on the longer range and reduce the effectiveness up close. Pre-release we had a very inaccurate non-scoped reticle, but we knew it didn’t feel right, so we tightened it up. However, much like other long-range guns, it became another close-range shotgun which prevented us from buffing any of the stats without drastically reducing close range accuracy. We’ve made tons of buffs to the long-range functionality and doubled the crit chance while limiting the close-range effectiveness.

DEVELOPER COMMENT: All around buffs for the classiest of weapons. With the recent Assault Rifle buffs to accuracy / handling, the Typewriter was left behind. We’ve upped the damage, handling, and overall effectiveness to ensure its rightful place in your arsenal.

DEVELOPER COMMENT: Along with the Sniper Rifle buffs; we didn’t forget about the Particle Accelerator. It received many similar changes making it very effective at mid to long range. Additionally, we increased the suck-factor of the Gravity Core to reduce the chances of more agile enemies escaping.

DEVELOPER COMMENT: We talked about the Devastator / Bandit interaction in a previous update and we finally addressed it. Instead of removing the infinite-shot scenario completely, we changed it to require multiple targets, so it isn’t the go-to boss weapon, but the multi-proc gameplay still exists. We also gave the Devastator a few buffs on handling and mid-range effectiveness.

DEVELOPER COMMENT: While having one of the most potent alt-fires in the game, the primary fire of the Defiler still fell behind many other sidearms. We’ve tightened up the spread and increased the effective range while also making the alt-fire power up slightly quicker.

DEVELOPER COMMENT: Since its little brother (the Hunting Rifle) got some love, we couldn’t leave Eye of the Storm out in the cold. A couple small damage increases to go along with the buffs from last update.

DEVELOPER COMMENT: The Hive Cannon couldn’t hit weakspots with its initial blast, so we fixed it! We also updated the size of the primary fire projectile. It should be much easier to hit targets!

DEVELOPER COMMENT: Since we removed the interaction of minions and leech ember (and minions interacting with specific rings in general), we decided to make the Tentacle lifeleech an actual intended mechanic. We added an innate lifeleech to tentacle strikes in a more official capacity.

DEVELOPER COMMENT: It made no sense that the “Worldbreaker” couldn’t break world objects. This was a drastic oversight and we are all ashamed. Now we are not!

DEVELOPER COMMENT: Added a new ring for those that like to make things more challenging. While this is a best-in-slot ring for damage, it’s also a worst-in-slot (by a longshot) for defense. It’s a great choice for making Normal and Hard “faster” experiences because you chew through enemies, but it’s also solid in Nightmare because most things already one-shot you! Give it a try!

The Ring of the Admiral can be purchased at Reggie for 2 (TWO!) scrap at the start of the game.

DEVELOPER COMMENT: These trinket changes were to help support the armor rework. We have many additional item updates coming soon!

DEVELOPER COMMENT: We’ve been listening to the community regarding the desire for more build variety at all levels of play. We wanted to bring up all armors instead of reducing the effectiveness of the current “best” (Radiant!). This is our initial pass to help separate each armor and give them unique playstyles while also encouraging mix and matching. Each armor set now has an additional 1-piece flat bonus that does not scale. Armor Values have also been increased. We will be actively monitoring the builds and tune numbers up or down in the next update to bring them even closer together.

DEVELOPER COMMENT: To better facilitate summoner build, balance, and performance, we reduced all summon mod charges to 2 (each summon by the caster counts towards increased damage for them only while wearing Soul Anchor). This also helps with summons blocking the paths of enemies. In our next update, we will be looking at powering up the effectiveness and identity of the individual summons.

DEVELOPER COMMENT: In our ongoing endeavor to increase the effectiveness of each mod, we powered up Explosive Shot for those that really love AOE damage. Enjoy!

DEVELOPER COMMENT: In the last update, we realized a bug (no pun intended) in the behavior of Swarm AFTER we submitted the update but before we finalized the update notes. We originally intended to increase the time and we mistakenly thought 25s would rectify the issue. We’ve since fixed the issue that forced Swarm to remain at 12s and capped it at 20.

DEVELOPER COMMENT: This is more of a Quality of Life change, but you can now heal NPCs in combat at a reduced rate by using Mender’s Aura.

DEVELOPER COMMENT: If a turret loses line-of-sight on enemies and has no target, it will stop firing.

DEVELOPER COMMENT: I mean, he is a very goodboy.