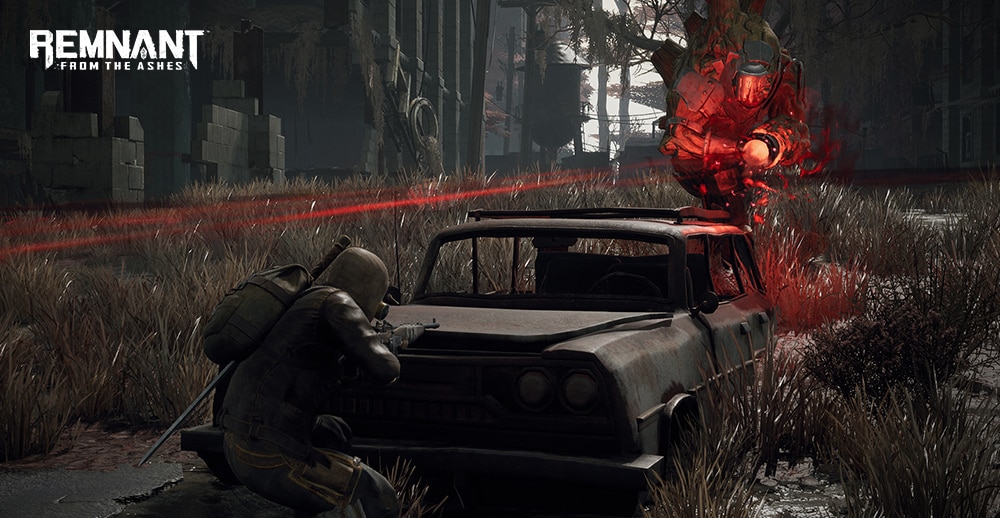 Today we’re excited to finally dive into some of the ground-level core system mechanics for REMNANT: From the Ashes. Over the past few months, we’ve shown some combat videos of amazing gameplay footage from our test builds, but until now we haven’t detailed how the game will actually control and feel when you get your hands on it on August 20, 2019. In this blog, we aim to remedy this by giving you a window into our designs on moving, attacking, and dying in REMNANT. The game is still a work in progress, so please understand that everything below is subject to change. Those of you who have played our demo at Gamescom, PAX West, TwitchCon, or GDC have given us a lot of great comments about the fluid, deliberate feel of combat, so we hope you appreciate this written preview.

We spoke with Mike Maza, Principe Designer at Gunfire Games, about these systems and here’s what he had to say!

Let’s begin with the most fundamental system of a 3rd-person shooter - movement. Successfully navigating the monster-laden worlds of REMNANT will be an essential part of your survival. Before we jump into the details, check out the image below for a look at our current control sheet (subject to change): Click the image above to see a larger version.

Avoiding enemy attacks is critical to achieving victory against the nightmarish creatures of REMNANT; thus we’ve included the ability to sprint. You can toggle between a jog and a full sprint by pressing down on the controller’s Left Thumbstick or Left-Shift on the keyboard to move at full speed. There will be plenty of moments where you’ll want to quickly move between cover, catch up with your friends, or escape from a pursuing foe.

Sprinting is not the only movement option in REMNANT. Each player has a few base ancillary movement tricks at their disposal. You can vault over low obstacles seamlessly from either a jog or a sprint simply by pressing the controller’s A-button or the keyboard’s Spacebar as you approach an obstacle. You will vault or roll over the object without losing momentum. Additionally, you can perform a powerslide by pressing the controller’s B-button or the keyboard’s LEFT-Ctrl key while sprinting. This is a useful tactic for sliding into cover – in fact, with careful timing you can break into a sprint, slide behind cover and then, in one seamless motion, roll over that obstacle and continue running! 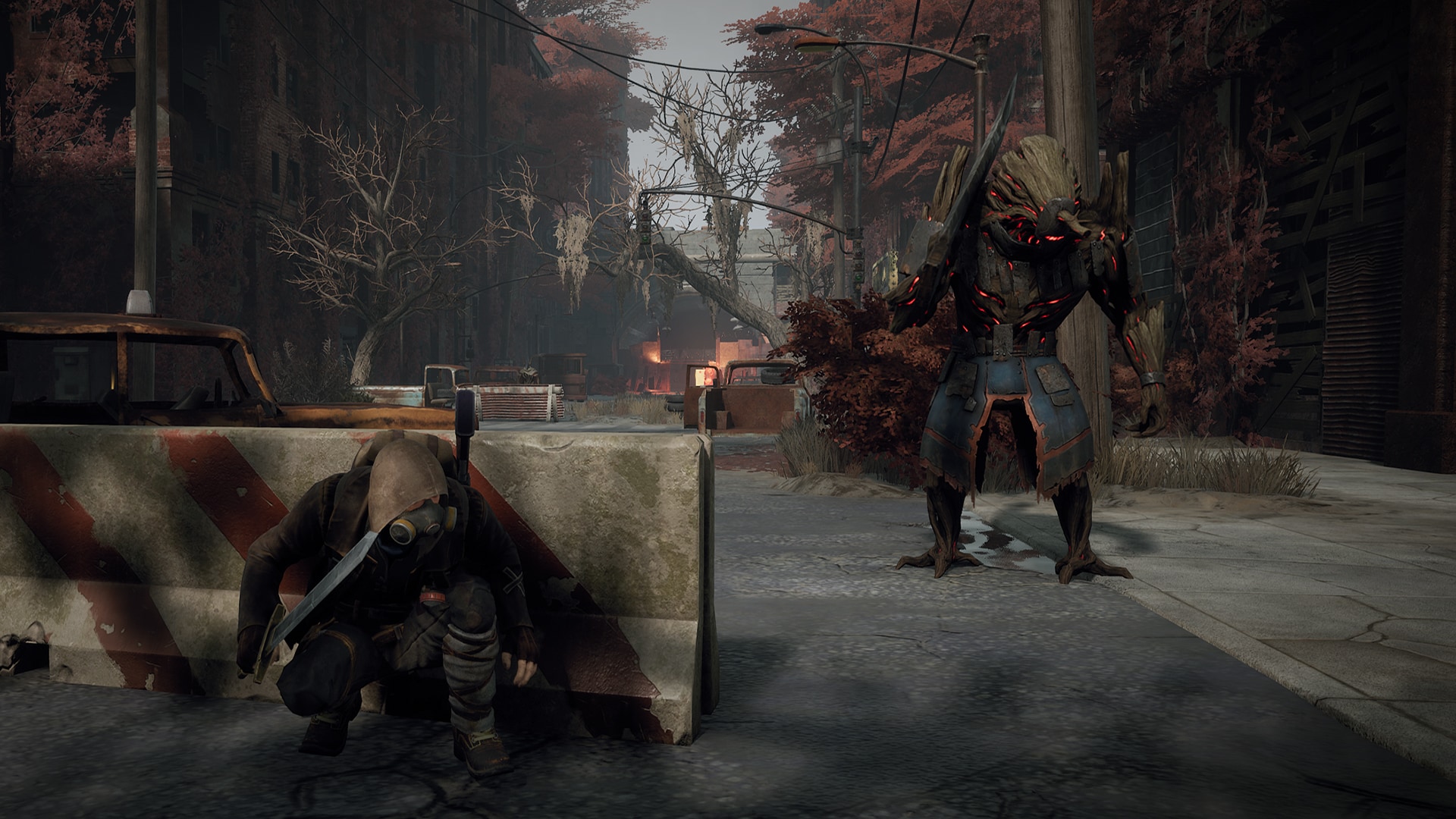 Dodging is also simple in REMNANT – you can perform a dodge roll in the direction of movement by pressing the A-button on the controller or the Spacebar on keyboard. Pressing either the A-button or Spacebar without moving will cause you to perform a quick backstep; useful when your character is caught flat-footed enjoying the view and sniffing daisies. However, simply knowing how to dodge is only half the equation – the player has to become adept at reading an enemy’s attack cues… watch for those telltale signs that your foe is about to attack. Your dodge will change based on your equipment and encumbrance as well. Timing a perfect dodge is a critical defensive skill in REMNANT… mastering it is key to surviving a fight.

There will be plenty of monsters for you and your friends to slay in REMNANT, so we wanted to touch on combat a bit before revealing more extensive details in the future. Swinging a melee weapon or firing a gun in REMNANT is a little different than you may be used to. Performing a melee attack is easy – simply press the controller’s Right Trigger or the Left Mouse button to swing your melee weapon. Guns, however, can only be fired while the character is in aim mode which is accomplished by holding down the controller’s Left Trigger button or the Right Mouse Button. Pressing the controller’s Right Trigger or the Left Mouse Button while in that mode will fire your weapon. The controls may take a short while to get used to but, once you get the hang of it, you’ll find that it’s effortless to switch between shooting and swinging!

Standing still or, better yet, crouching will be your most stable positions while shooting. Although your character will be limited to a deliberate walk while in Aim Mode, any movement will affect your weapon accuracy and shot spread. The reticule will change to reflect that - the spread growing wider as you move and change directions. Try to use restraint if you have a tendency to lean on the trigger. Remember, short, controlled bursts win fights… and conserves ammo to boot! 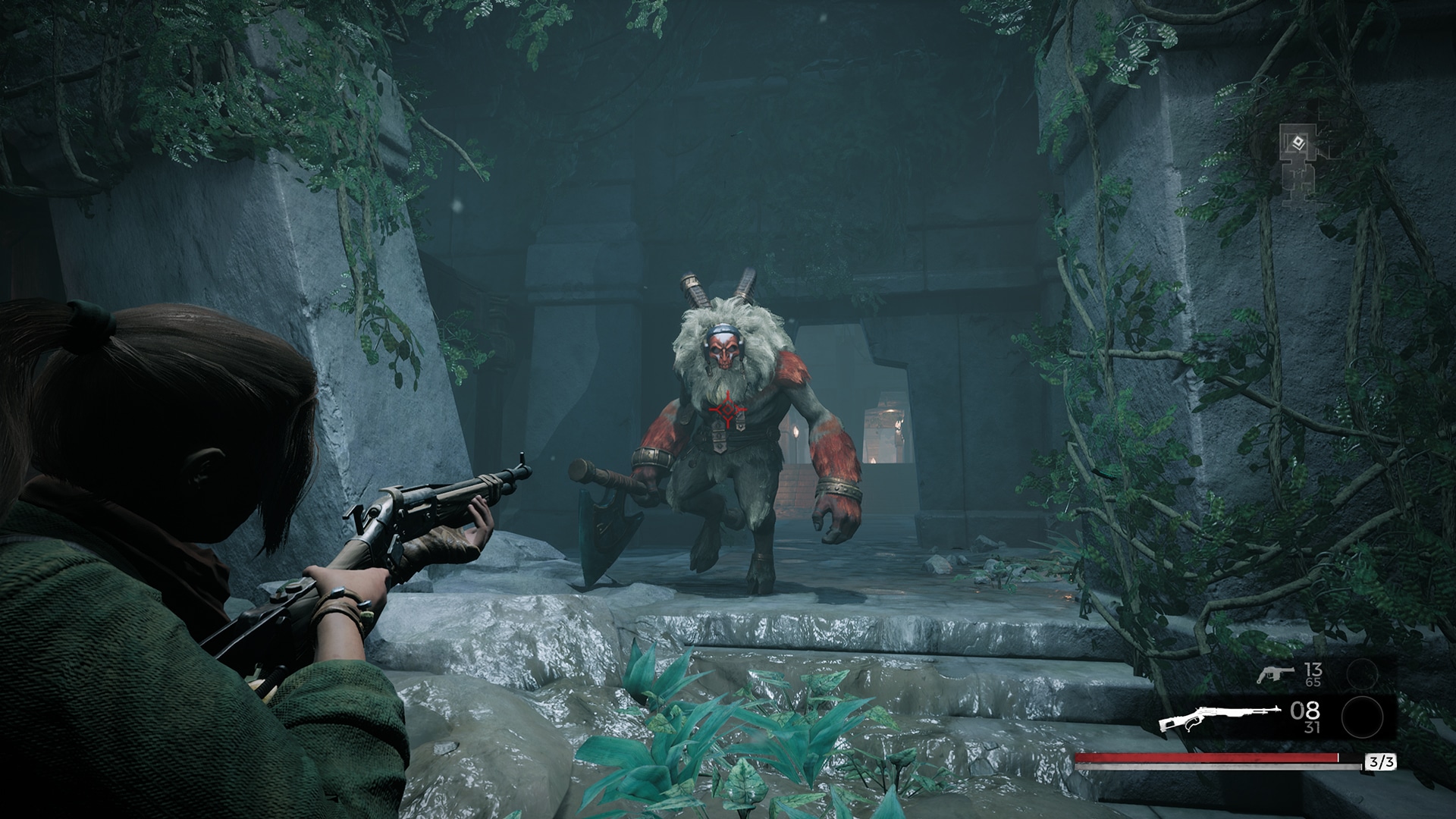 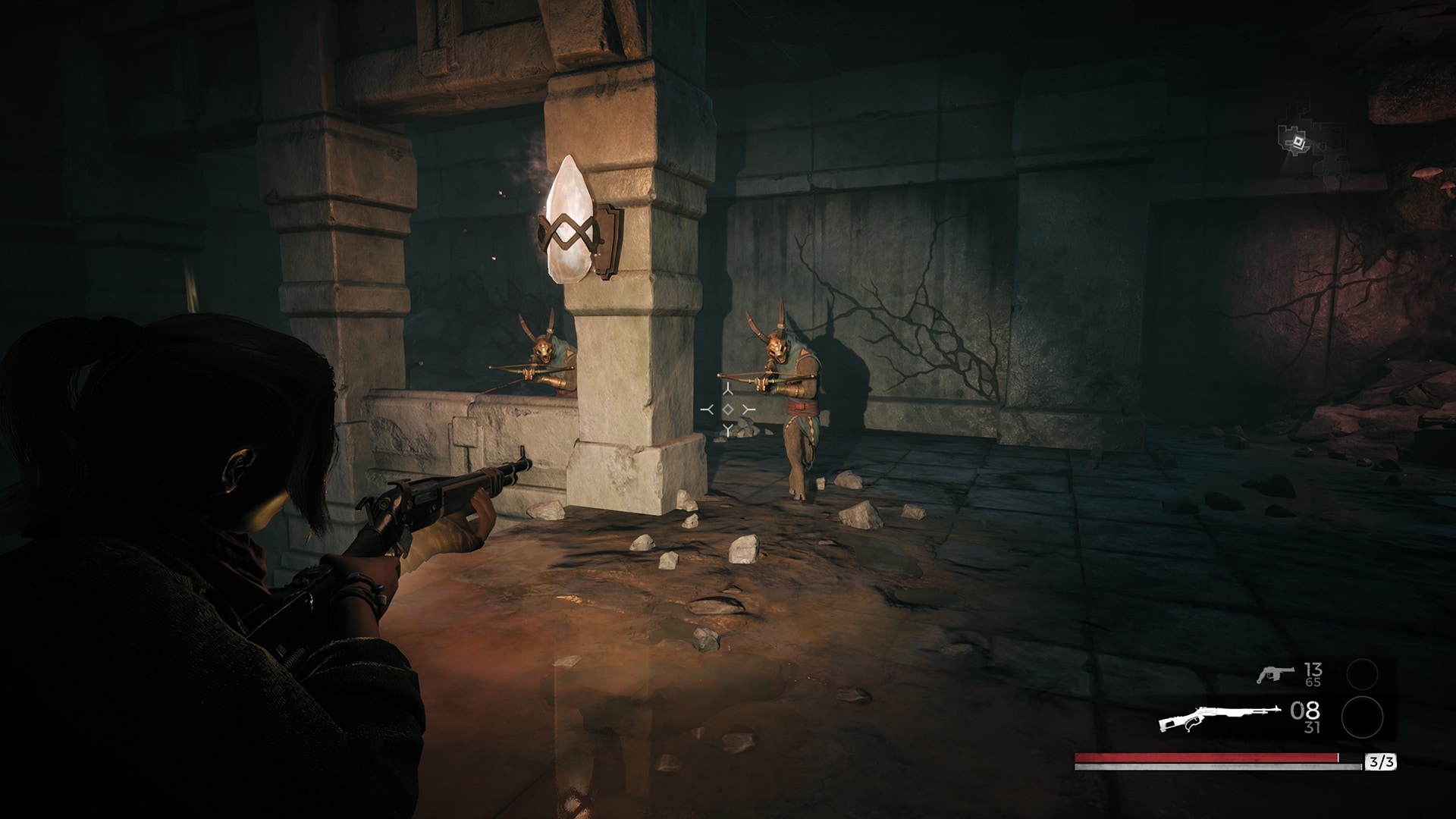 Death is inevitable in REMNANT. Expect to die (and die often at first) – it’s part of the charm and challenge of the game. Luckily death is not permanent thanks to the strange World Stones and World Shards found throughout the environment. You will respawn at the last checkpoint you interacted with along with replenished Dragon Hearts (healing item) and a full stock of ammunition. However, it’s not all peaches and cream… an all-new set of enemies in the zone will also respawn in completely different locations. Tread carefully…

It’s also useful to talk about death in multiplayer. Working alongside a team of friends makes for a great time in REMNANT and helps take down some of the tougher bosses in the game. However, it’s imperative that you work to support each other in every fight. When one (or more) of you go down during a firefight, your teammates will have a limited time to revive you before you die. If you die, you won’t be able to respawn until at least one of your teammates reaches a World Stone or Shard checkpoint to initiate a resurrection. If your entire team dies you will ALL respawn back at the last checkpoint… and your enemies will repopulate! 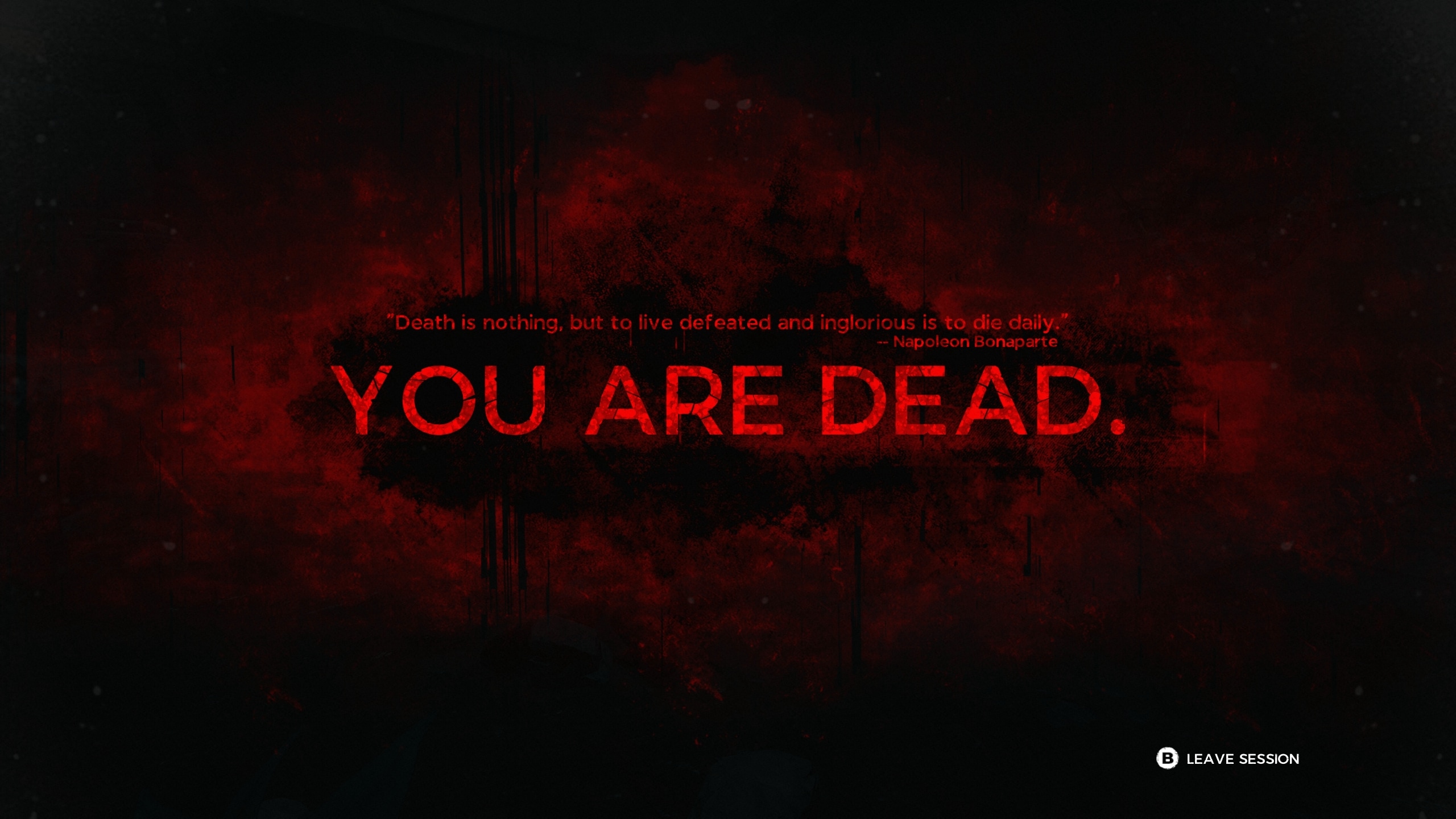 We’ve covered a lot, but still only scratched the surface of what REMNANT: From the Ashes has to offer. Stay tuned for more details, videos, exclusive reveals, and more exciting content on our Twitter and Facebook pages. Be sure to join the conversation with devs and fans like you on our official Discord server. Until next time, Survivors!