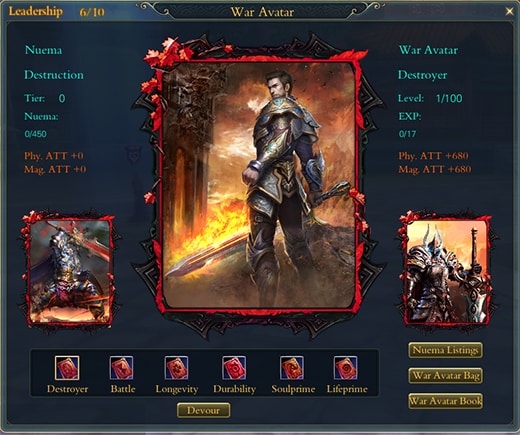 Nuema is an extra stat bonus mechanic inside the War Avatar system. Each card slot category has Nuema Tiers attached to it. As you level up your Nuema Tiers, you will gain stat bonuses that depend on the card slot category that Nuema Tier is for. The stat bonuses are not affected by the cards in the category itself, and generally can be seen as a type of end-game maximization to the War Avatar system. Let's talk about how to gain Nuema experience to level up your tiers. In addition to the Origin Orbs, monsters chosen for that day also have a chance at dropping Nuema Essence Orbs. They are the same as Origin Orbs in every way except that they give triple the amount of Nuema Experience. They are quite rare, so make sure to save yours for the right time!

Nuema are broken into 5 Tiers with level requirements:

Origin Orbs are also tiered to reflect their Nuema category, however they do not have a level requirement. Instead, if your current Nuema Tier for that categor (say Longevity) is 2 or more levels under the orb's level, then the orb will not award the full amount of Nuema experience.

For example, if your Nuema Tier for Longevity is at 0, and you use an Origin of Longevity Tier 5 orb, rather than gaining the full Nuema experience, you'll gain roughly half. Obviously, this means you will want to go for orbs that fit your current Nuema Tier Lv. and save the higher ones for later.

To collect a Neuma Origin Orb, you will need to kill a monster on the Nuema Listings Window (shown near the top). Once it dies, it will leave behind a spirit that when absorbed, awards an orb. Up to 10 people can be attempting to absorb a Nuema Origin Orb from this spirit, but only one will be successful.

Additionally, when more than one player is attempting to collect an orb, the channeling time is randomized between 10 to 20 seconds. It may be best if your team decides at the beginning who will get the orb, otherwise the winner will be the lucky one.

A key thing to note is that players can only absorb an orb 20 times a week, with the absorption limit resetting @ 24:00 server time Saturday.

As was stated at the beginning, Nuema stat bonuses are not affected by the cards at all. However, they are affected by your class. Each class in the game is awarded different stat values for advancing their Nuema Tiers, varying for each category.

Generally, these modifiers are beneficial towards the class' weakness, such as Assassins' getting more survivability from their Durability Nuema, while they lessen the amount of Nuema stats gained from their class' strengths. You'll have to experiment to find out which category of Nuema you want to focus on improving daily for your specific class.

The Nuema and War Avatar categories you choose to focus on first will help define your character from all the rest! What will you decide to power up first?

That concludes this preview on the War Avatar System. We hope you enjoyed learning more about what is to come in our next expansion.

Keep checking back for the next preview as it will cover a monumental change to the game, coming to you soon in Perfect World: New Horizons!