Hello once again adventurers, game designer Douglas “Asterdahl” Miller here today to talk about masterwork recipes. What are they and who are they for?

You might have heard the term masterwork professions in recent interviews, but the title is a little misleading, as it encompasses the addition of new high-end, difficult recipes as well as the quests to unlock them and the tools to complete them, but does not add any new professions to the game. The feature also encompasses the addition of new materials and new methods of gathering those materials—explorer’s charts.

Before we dig into the details its worth talking about who these masterwork recipes are for and why we’ve added them. Right now it’s very difficult to make a profit as a crafter, for various reasons. Some professions like Weaponsmithing and Artificing have little to offer at max level due to being in the same space as artifacts. For those professions that can make useful equipment the item level is too low to remain competitive with other sources. And perhaps most importantly although there is some investment in leveling a profession it’s not very difficult to reach the maximum rank and at that point there’s very little that sets maximum rank crafters apart.

In order to unlock masterwork recipes a player must be a member of a guild with a stronghold guildhall of at least rank 12. At that point players with at least one profession at rank 25 will receive a quest from The Master of Coin to speak with a new contact, “The Artisan.” In order to unlock new recipes for a given profession players will have to undertake a series of quests for that profession that puts their crafting abilities to the test. If it sounds tough that’s because it is, but you’ll be crafting item level 140 armor, new multi-slot rings and components for stronghold artifact weapon(s), all of which can be traded and sold freely. Only through making these recipes difficult and requiring a substantial investment can we make the equipment created on par with gear earned from some of the most difficult content. Otherwise it would be a no-brainer to just skip everything and focus on crafting.

Now some of you might be thinking “I’m in a smaller guild with a low rank stronghold” or “I’m not really a crafter,” so, “this doesn’t really affect me.” In reality masterwork recipes affects more than just those who engage directly. For those crafters not in a high rank guild or not ready to make such an investment, those undertaking masterwork recipes will need a number of lower rank materials and rare items from professions they might not have even leveled. In addition, with new opportunities opening up the competition on currently profitable and evergreen items will be reduced allowing those prices to rise or stabilize.

It also bears mentioning that similar to the way earning endgame seals and equipment has been eased over time—via the addition of alternate methods of obtaining equipment and seals, as well as an increase to the rate at which seals can be earned—we’ll be keeping an eye on masterwork recipes and making adjustments as we move forward. To a large extent, the restrictions will be eased over time naturally through the economy as well. For those not interested in professions but part of a high ranking guild, the explorer’s charts used to gather new materials opens up opportunities for profit by selling those materials. 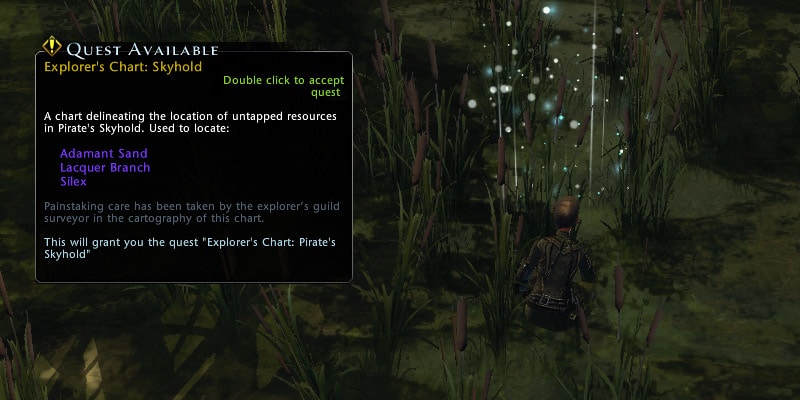 What are explorer’s charts? They are maps that can be purchased from a rank 6 marketplace for guild marks. You’ll be able to purchase charts for one of four zones—Mt. Hotenow, Vellosk, Pirate’s Skyhold or Whispering Caverns—which will allow you to gather a number of rare resources unique to each zone. You can use these materials yourself, gather them to help your guild or sell them to crafters on the auction house.

Phew, that’s a lot to digest! Masterwork recipes will be releasing with Neverwinter: Underdark, and I look forward to seeing new crafted equipment up on the auction house. As always, you can discuss these upcoming additions on the forums. Until next time.