Gond the deity of invention inspires mortals to create, paying no attention to the consequences of their inventions. Gond has identified Neverwinter as requiring encouragement and has sent his Clerics to offer rewards to the artisans and engineers that can craft valuable and innovative items.

Starting on April 16, 2015, players will be able to participate in the Wonders of Gond Event. Adventurers will show off their crafting and engineering skills as they work towards creating magnificent new items!

Furthermore players will be able to use the Neverwinter Gateway to collect event items through Sword Coast Adventures as well as collecting refinement items by completing Event Profession Tasks. 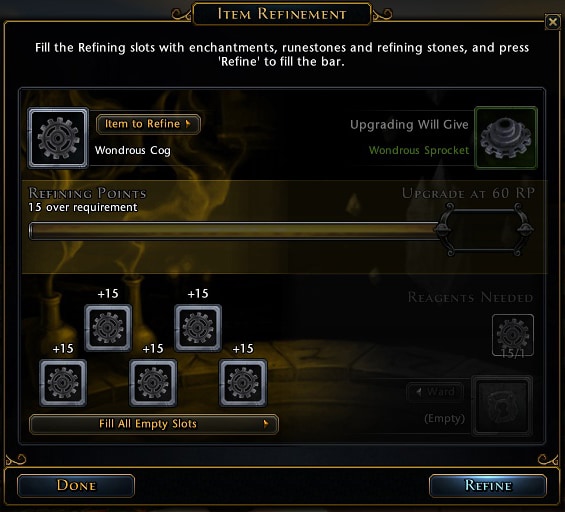 In addition to finding the Wondrous items via the creatures of the Forgotten Realms, a limited time profession task will be introduced which players can create the Rank 3 Sprocket along with lower tier Wondrous event items.

What rewards can players earn? Adventurers will continue to upgrade the Wondrous items until they can create the pinnacle device, the Doohickey. This device represents the pinnacle of mechanical ingenuity and would impress Gond himself with the fine craftsmanship. Not only can you use this item to deal damage to your foes, this item can be turned in for a chance to receive the Apparatus of Gond Mount!

Located in the Event Dais, in Protector’s Enclave, is a vendor where players will be able to turn in event items for various rewards:

A grand reward for reaching the highest level of craftsmanship and ingenuity during the event. This pack contains a chance to gain the unique Apparatus of Gond mount along with a chance to collect many other items including the Blacksmith companion. 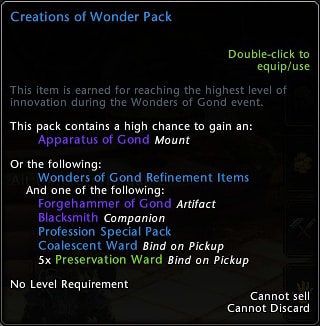 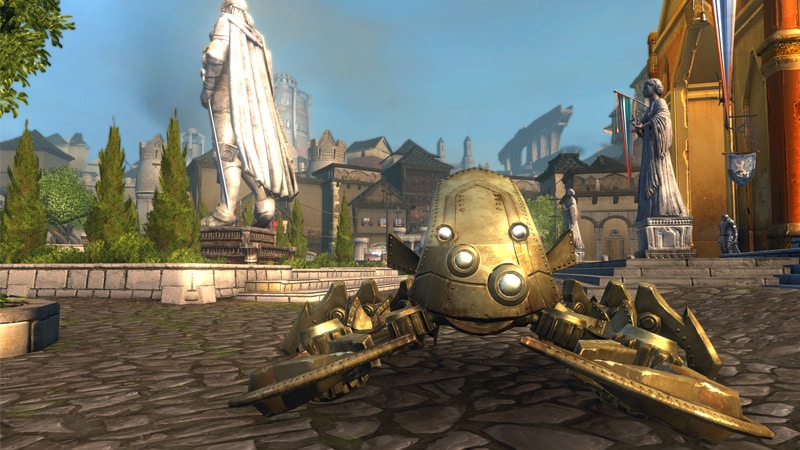 Want everyone in Protector’s Enclave to know you’re one of the best craftsmen in Neverwinter? With this fashion set there will be no mistaking your skills. This fashion set features Googles, an Apron and Blacksmith Pants. This one time use item will shrink the Apparatus of Gond down to a miniature level for a while. This will undoubtedly become the next Lego project for our QA department to create! Show Gond how inventive and crafty Neverwinter adventurers can be and you will be rewarded with many unique items! Which reward items are you excited for? Let us know on the official Neverwinter forums