Hi everyone! I’m Jeff Miller, Environment Artist on Neverwinter, here to talk to you about the newest addition to the Stronghold map… the Great Hall! 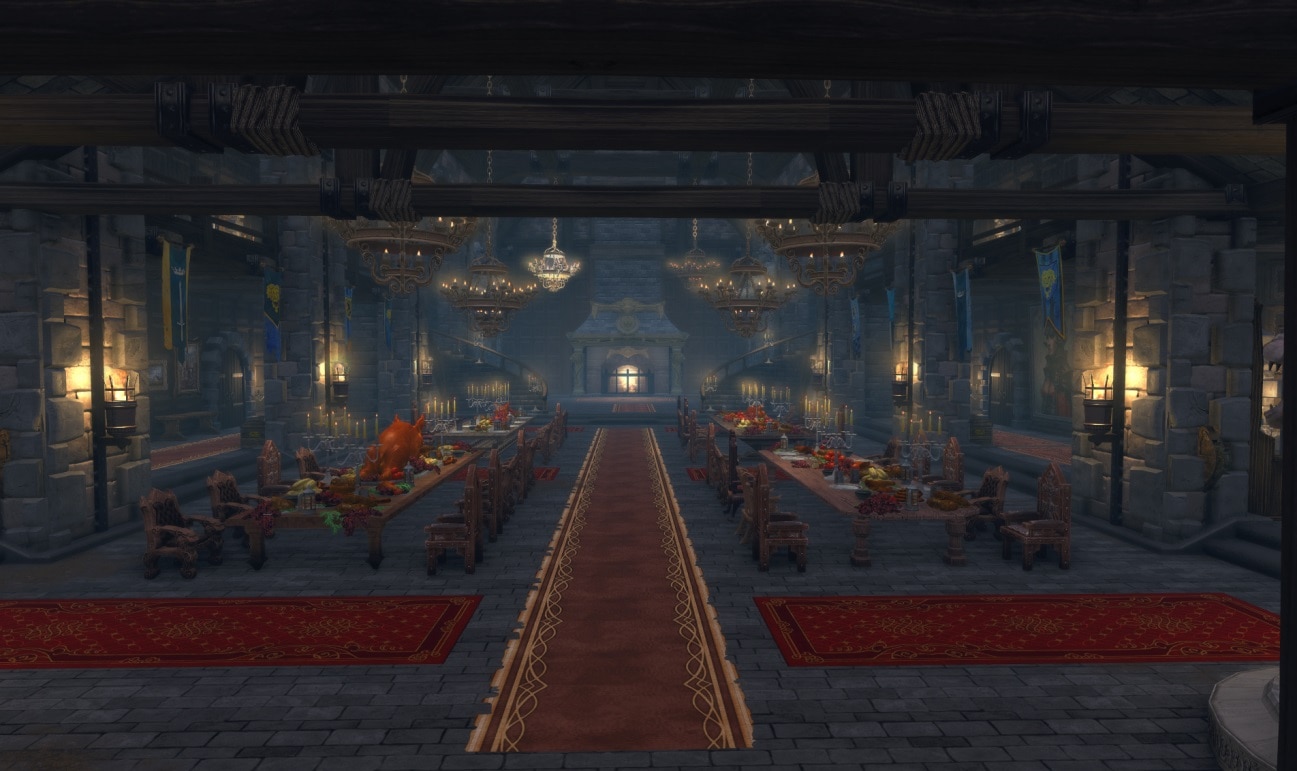 It was pretty exciting to start talking about the great hall during our initial M11b meetings. We already had the base ideas down on what we wanted, so it just came to building it. These were the main goals we wanted to hit when we started working.

As with every environment I work on, the first step is to gather reference. This could also mean working with the concept team, but in this case I felt I could find the reference I needed to build the space. I didn’t start empty handed though. The main style and art for the great hall had already been created for the exterior of the castle. I just wanted to excite inspiration for layout and décor through reference. These are a few I found: The main things I took from these images are things like weapon wall layouts, how wood paneling is used on the walls and ceilings, fireplaces, overall room shape, etc.… Overall I really think we nailed it in game. Taking these elements and converting them to the Neverwinter look and feel was an amazing project.

Building the actual room got very technical very fast, as with almost everything associated with strongholds. The size of the room was dictated by the exterior of the building. Since one of our goals was that the room existed within the stronghold map this meant limited space. If we had chosen to load into a different map size wouldn’t have been a constraint, but we felt very strongly about being able to just run inside. This ended up being fine since the size of the room felt pretty good.

The next tech hurdle was lighting. We have a hard cap in how many light/light sources can affect a single prop/object. The room itself is considered a prop/object when our game engine looks at it. So the walls, floors, and pillars all have these rules applied to them.  To allow multiple lights in the room the room needed to be split up into pieces so that the lights would work properly. Once the room was built, materials applied and in game. It was time to decorate! I couldn’t however decorate exactly how I wanted because in the end our goal was to make sure the players could control the decorations. Working with the designer we came up with decoration plots. These are just preset spaces in which a decoration could fit. For example a wall slot could have a book shelf or a large painting. The types of decoration plots we made are pretty large. There are rugs, chairs, tables, walls, banners… just to name a few.

Once the types of decoration plots were set, I had the task to come up with all the different types of decoration props/objects that could fit. It gathered up as many as I could and built some new ones that are specific to the great hall. Here is a shot of all of the possible props. The final step was to put all of these props into the room in such a way that worked with the design setup. I filled the space with the props to create a finished look that I liked. After that I grouped props in plot types. This made sure that you would never get a painting where a statue should be. The next shot below shows that final state. The beauty of the great hall system is that your great hall will look different than mine because you have all the control. You may have green rugs instead of red. Or you may like having the Deathly Guardian statues instead of the lions. It really is awesome! 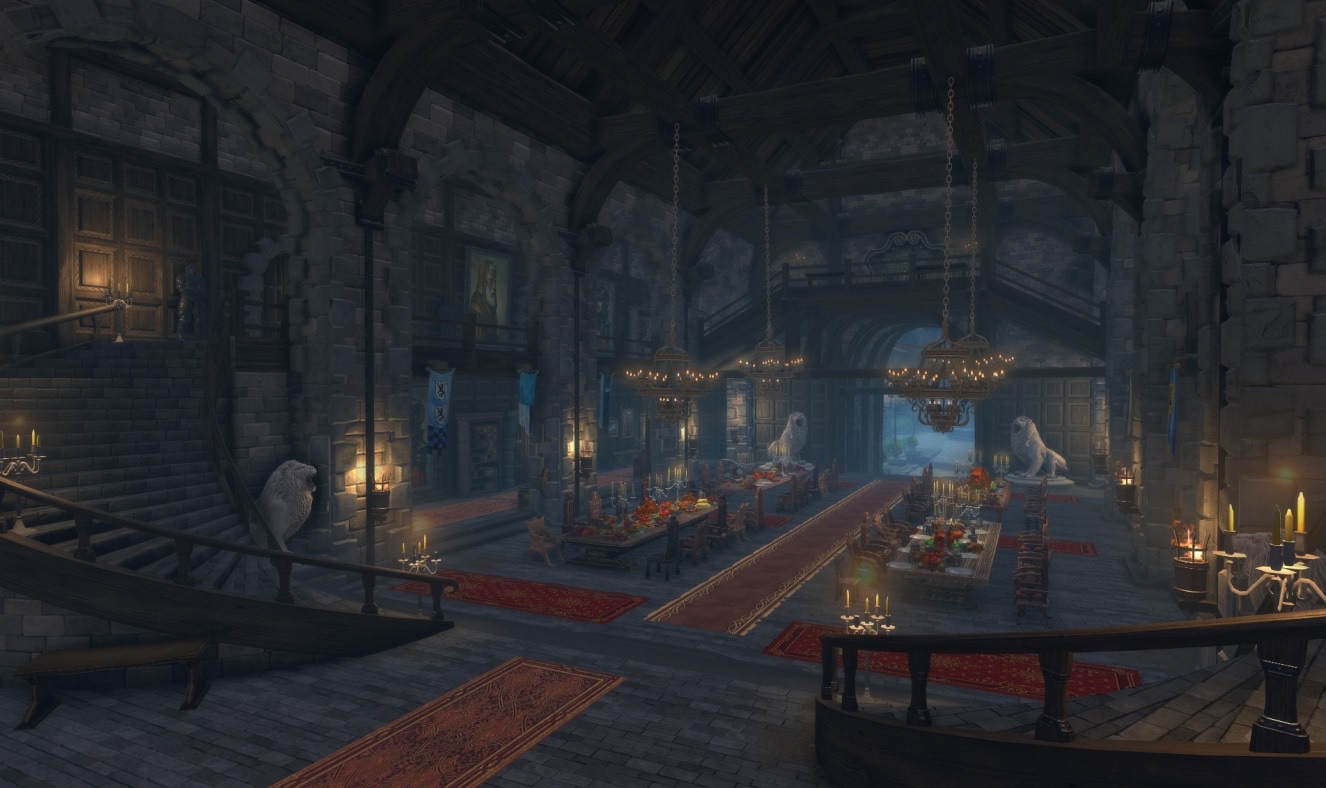 We are really excited for you and your guild mates to get ahold of this update and see what you all come up with! Also this system is expandable, so in the future we can add more decoration props to the mix! 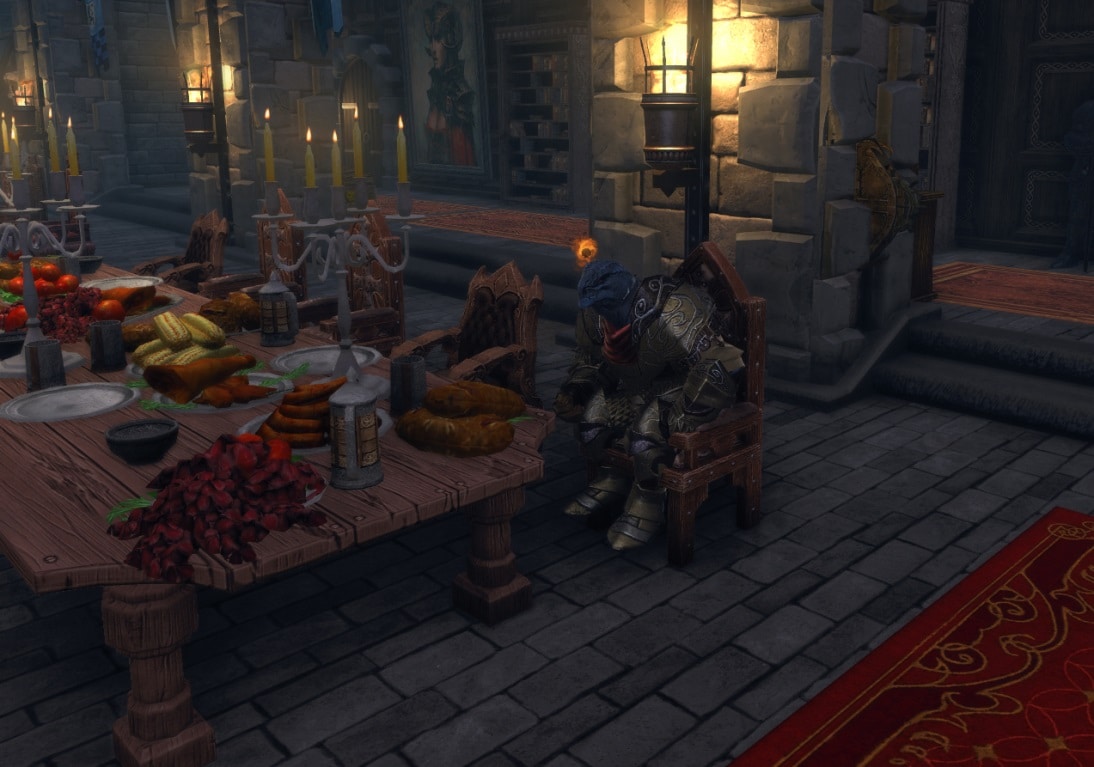 Before I wrap up here I wanted to share one last bit. I really wanted guild mates to be able to sit at a table together. I’m so excited to say that Sit Tech now exists in Neverwinter! There are some things to note here though. The first is that only the chairs within the Great hall are sit able. No other chairs in the game will be…yet. The reason for this is that since we didn’t launch Neverwinter with this tech, chairs have been used in such a way that would break. An example of this is there may be a chair that is buried under debris or knocked over on its side. If we simply applied sit tech to all existing chairs we would run into a problem of players getting stuck or just look broken. So with that said, any new chairs moving forward will have sit tech applied and during our bug fixing time we eventually will get to other chairs in game from older maps.