It is with some regret that we are announcing the closing of Gateway for Neverwinter. This was not an easy call.

The reason is that the current Gateway website has been shown to be susceptible to several aggressive botting activities. We’ve tried multiple times to stop the botting. Each time, it’s worked for a while, but then the botters have found new ways to break Gateway. Such incidents not only affect Gateway but greatly live game performance in Neverwinter, affecting players on the live shard.

The constant vigilance to counter these continual activities ties up resources that we feel are better used in creating content for you in Neverwinter.

We are thankful for all of you that have participated in Gateway and Sword Coast Adventures, and we don’t want to leave you empty handed, so in the next build release planned for next week we are giving all player accounts that have recently used Gateway a Mini Apparatus of Gond companion that will be claimable in their mailbox. 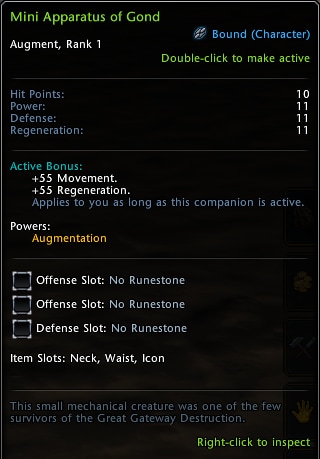 Again, thank you for your understanding, and I’ll see you in Protector’s Enclave!