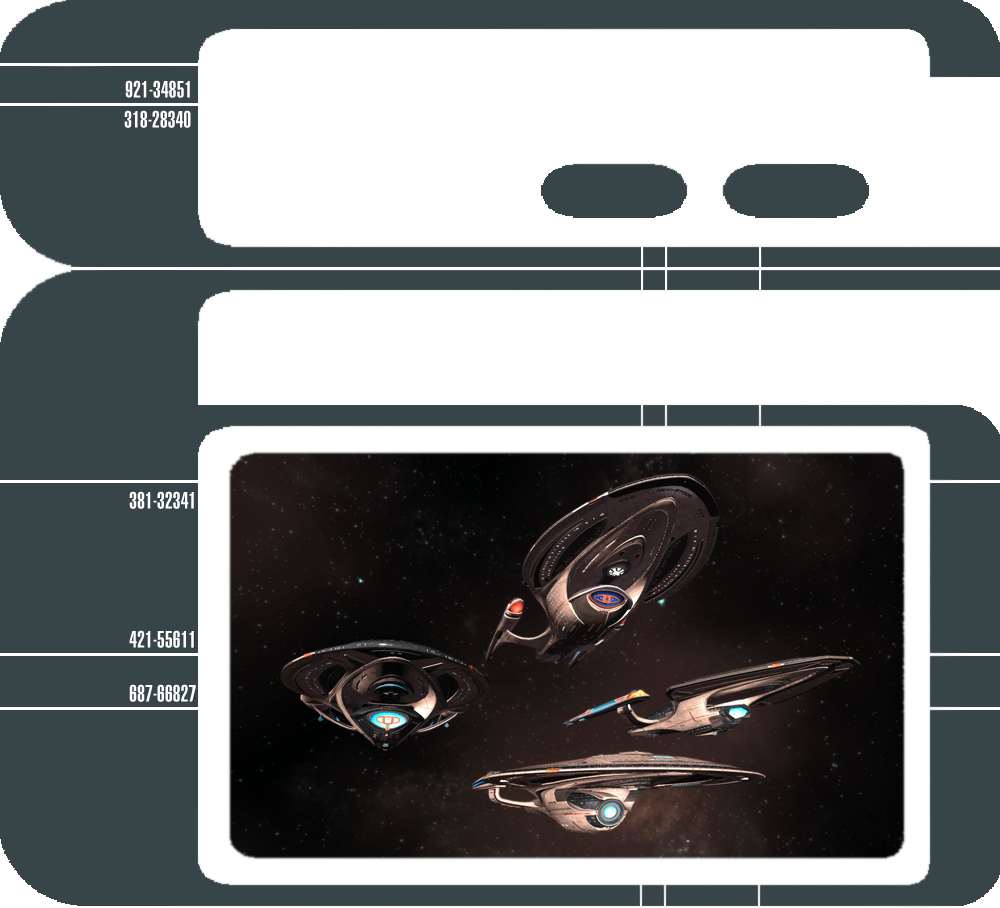 As Star Trek Online’s submission to the pantheon of Enterprises, the Odyssey-class holds a very important position among the ships Cryptic has made. We were very excited to revisit this ship for its Tier 6 iterations. The upcoming Flagship bundles offered an opportunity to take a fresh look at the Odyssey’s distinctive dual-necked design.

Like any iteration of the Enterprise, the Odyssey class proved controversial when it was introduced, but has since become a common sight in sector space of Star Trek Online over the past four years. Starting with the established Starfleet “Tier 6” look and feel, we then recalled player feedback on the Odyssey design from as far back as the “Design the Enterprise” contest in trying to determine a direction for the new variants of the T6 ships.

Since we are doing a “Mega Bundle” with three new variants of the Odyssey, we had plenty of freedom to make each design cater to a specific aesthetic. Over the course of 50 years of the Star Trek franchise, Starfleet vessels have diversified greatly, with many fans preferring a particular look. Some favor the sleek lines of the Sovereign class, others prefer the wide and majestic footprint of the Galaxy class, while still others love the aggressive, angular look of the Prometheus class.

The concept sketches below show how we explored variations on these themes, picking out our favorite silhouettes and elements and combining them into the three new Odyssey variants: the Yorktown, the Sojourner and the Endeavour.

The concept behind the Yorktown was to create a “refit” version of the Odyssey, similar in idea to the way the Constitution or Excelsior classes were refit in Star Trek: The Motion Picture and Star Trek: Generations. It seemed logical that many Odyssey-class ships saw extensive action during the Iconian Invasion and would receive extensive refits and upgrades in the months after the war ended.

Visually, the general shapes remained similar to the original Odyssey class design, but we tweaked key features to illustrate an incremental improvement in technology built around the same frame as the original ship. These embellishments included forward-swept nacelle pylons, different nacelles and exaggerated housings for the main impulse engines. All of these small changes work together to represent how Starfleet has evolved its flagship class to respond to the lessons it learned since the original Odyssey was introduced.

The Yorktown is the “Science Star Cruiser [T6]” variant of the T6 Odyssey flagship bundle.

The Sojourner class represents the “Engineering” family of Odyssey star cruisers. For this variant, we wanted to explore a ship that had the shorter and wider proportions of the Galaxy class while still keeping the distinctive dual-neck design that made the Odyssey unique.

With a wide saucer and shorter nacelles, the Sojourner evokes those stately Galaxy class proportions at the larger scale of the Odyssey. She also borrows features from the recent T6 adaptation of the Galaxy, the Andromeda-class, suggesting a common lineage for all of these Starfleet cruisers through the generations.

The Sojourner is the “Operations Star Cruiser [T6]” variant of the T6 Odyssey flagship bundle.

Finally, the Endeavour is the tactical variant of the Odyssey family. It takes its sharp and aggressive lines from the Avenger and Arbiter-class battlecruisers, making it an imposing presence at its much larger size.

Like all of these other new variants, the Endeavour can perform Chevron separation and launch an Aquarius escort should the captain have those consoles from the previous Odyssey bundle. These abilities are reflected in the design of the new ships, with the Endeavour featuring a large control and docking area in its aft section for the Aquarius escort. It also features large secondary impulse engines in the saucer section, essential for Chevron separation.

The Endeavour is the “Tactical Star Cruiser [T6]” variant of the T6 Odyssey flagship bundle.

With the offering of these new variants of the Odyssey Star Cruiser, we wanted to make sure captains had the ability to customize parts between both the new variants and the original Odyssey design. To that end, we had to adjust the old model so that the nacelle pylons could be separated from the hull (while not disrupting the flowing shapes that are distinctive to the ship, of course).

In doing so, we took the opportunity to “clean up” the old model, adding more details, smoothing out its surface, and re-applying its textures to bring the original model up to our current standards of ship-art quality. While adding these details it was also important not to change any of the design’s distinctive features, so these additions and refinements were deliberately subtle.

The original Odyssey parts will be available for free on any Star Cruiser [T6] variant.