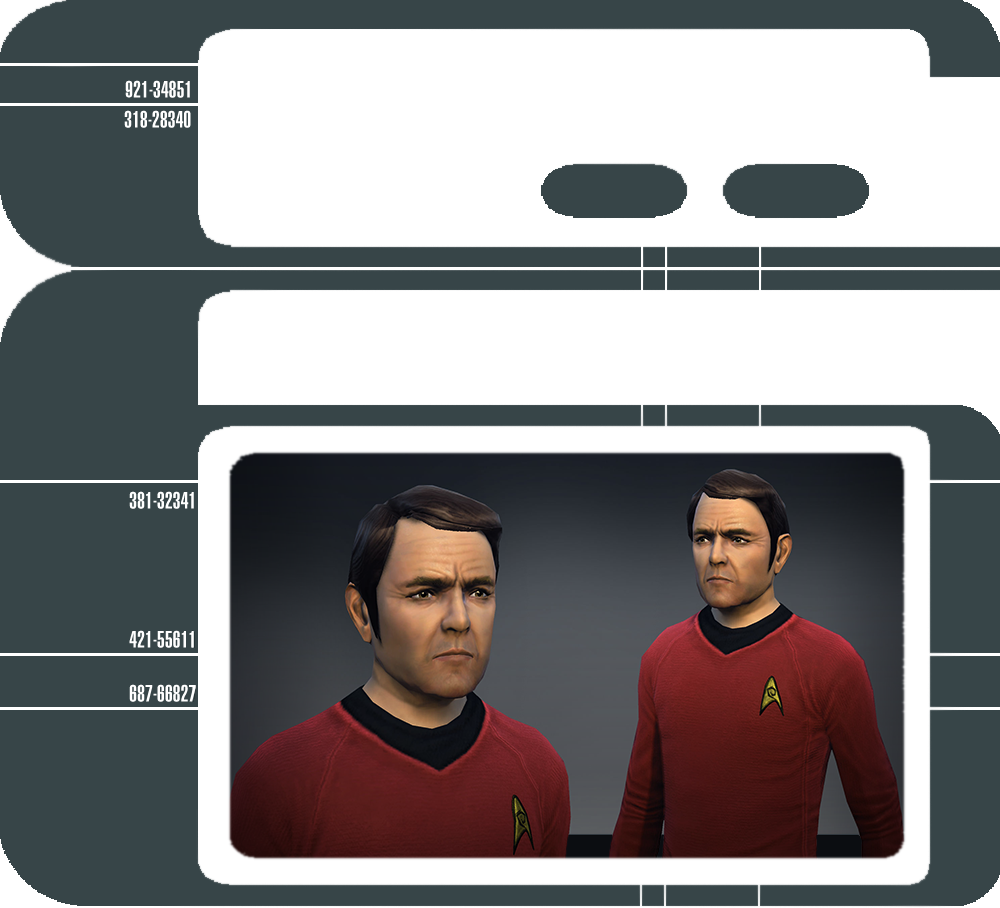 Montgomery Scott (“Scotty”), played by James Doohan, is one of the most recognizable characters in all of science fiction. His very name brings images of a highly skilled, lovable, and often concerned technician. Even people who don’t know Star Trek know the phrase “Beam me up, Scotty.”

As chief engineer of the USS Enterprise, Mr. Scott was often one of the biggest factors behind the Enterprise escaping serious damage or destruction multiple times. He is his captain’s miracle worker, and he is often the archetype by which Hollywood models their “tech-savvy,” but down-to-earth characters after.

Chris Doohan lends his voice to Star Trek Online in the role his father made famous. From his days as a lieutenant commander on the Enterprise to his future as a captain, Scotty will play a big role in the fight for the timeline.

Scotty’s no stranger to the game. When we last saw him on Drozana Station in 2265, he joined forces with captains to save the station from the alien threat of the Devidians.

Several of us grew up watching TOS in the 80’s while it was in syndication. Scotty was one of the regular crew appearing whenever his expertise was needed to fix some problem on the Enterprise. We liked it when he was a member of an away team. His colorful sayings were one of the stand-out features of an already skilled cast. Without Scotty, Star Trek would not be as iconic as it is today.

Before any artwork was ever done, screenshots of Scotty were taken from TOS episodes, as well as the various movies he appeared in. This took quite a lot of time, because Scotty appears in almost every episode of TOS! But, after a few days, we had several large files filled with screenshots.

Next, we needed to find the best, and most appropriate images of the character. Since we were sculpting an image of him in ZBrush, we needed appropriate images of his face. For instance, Scotty has appeared in several types of costumes throughout the years. We certainly love the beige uniform he wore very early on, but we wanted to use his “typical” red uniform instead.

We then searched for images of what is called a “resting” face –an expression in which his face is mostly neutral in appearance. Unlike faces with a significant expression, the neutral face allows us to get the likeness down without permanently putting a scared, angry, or concerned look on the character. (Although there have been certain villain characters in which a permanent, angry expression is very appropriate!)

ZBrush is an amazing program used by many character artists in the game industry. It allows us to sculpt organic forms that would otherwise be very difficult to do in any other program. In our experience, most character artists use ZBrush to get their final look. In our case, we used both ZBrush as well as Cryptic’s Character Editor to make Scotty.

We were very happy to work on Scotty - it was an honor to make such an iconic character. We really feel his addition to our vast game will help bring home that TOS experience to our players. We certainly got that nostalgic feeling when we were creating him!