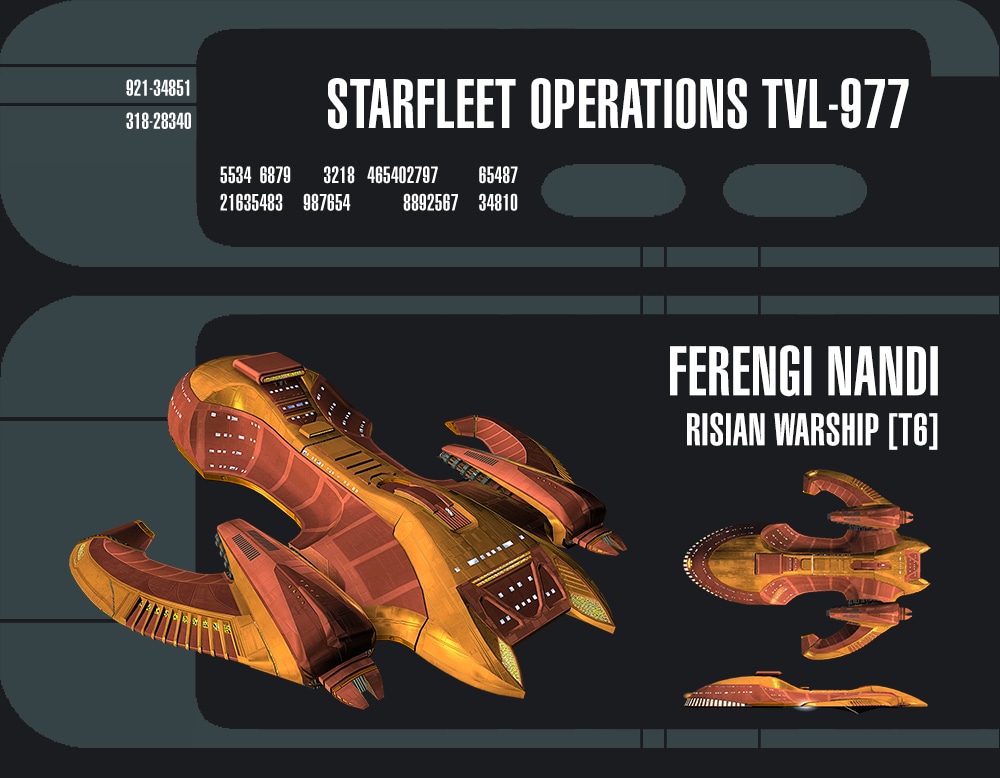 Developed by the Lobi Crystal Consortium (a wholly-owned subsidiary of Quark Enterprises) under contract for the Risian Hospitality Association, the Ferengi Nandi Warship offers the finest in both firepower and luxury for the discerning ship commander. Featuring expanded science bridge officer seating as well as tactical improvements over other Ferengi warships, the Nandi is durable, stylish and extremely desirable. Impress your enemies with the vastness of your wealth before you blow them into scrap!

The Ferengi Metaphasic Solar Capacitor collects background solar radiation and stores it in a metaphasic matrix.  This provides a small passive bonus to shield healing, shield hardness and exotic damage.  However, when activated, the Capacitor generates a powerful, but temporary metaphasic field. As long as the field is active, it improves Shield Hardness, all Shield Healing abilities, and Exotic Damage significantly.  Once this effect expires it disables the passive benefits from this console for 2 minutes.

This Console Mod can be equipped in any console slot on either the Ferengi D'Kora Marauder or the Ferengi Nandi. You may only equip one of these mods on any single ship.

After achieving level 5 in the Ferengi Warship's starship mastery, you will unlock the Greedy Emitters trait.  While this trait is slotted using the Energy Siphon, Tachyon Beam, or Tyken’s Rift Science Bridge Officer Abilities gives a buff which grants immunity to energy drain, reduces energy weapons power usage, and increases your subsystem power levels for 10 seconds. This buff may be triggered once every 30 seconds.

This set includes the following consoles:

NOTE: The above stats for this ship and its items and powers are subject to change.