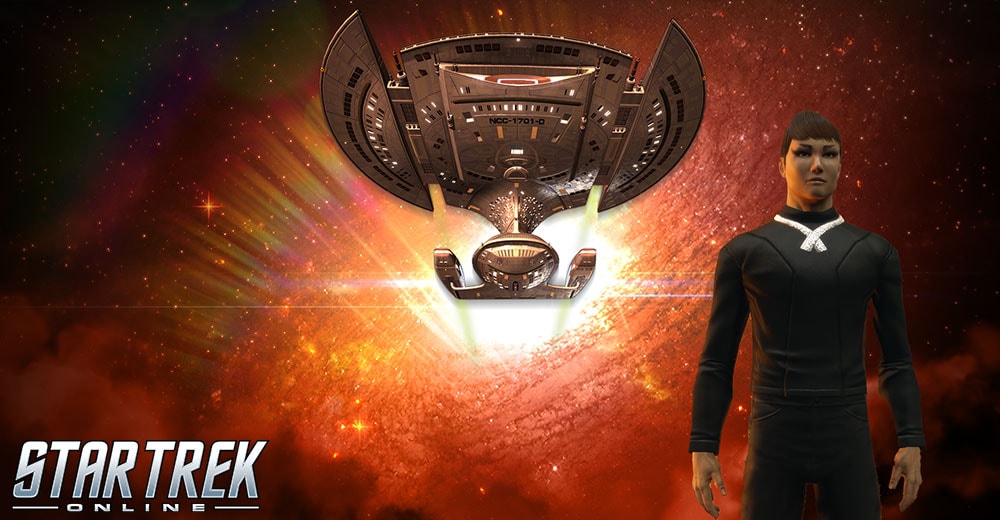 The Confederation of Earth was forged out of the human race’s hard-fought battle to survive.  When Earth was facing its own self-inflicted extinction, it was alone.  Forced to rely on its own ingenuity to survive, great men and women fearlessly stepped up to meet the challenge.  People like Dr. Adam Soong, whose pivotal work saved humanity.  Humanity didn’t need other species then, and they don’t need them now.  In the immortal words of Dr. Soong, “A Safe Galaxy is a Human Galaxy.”

It was this terrible, alternate world that Picard and his friends were thrust into in season 3 of Star Trek: Picard. And while the techniques and weapons of the Confederation of Earth were horrifying, some of those designs nonetheless returned to our universe when Picard did. After a thorough debriefing from Starfleet Intelligence, Starfleet engineers were able to replicate some of the technology in a manner more suited to the ideals of Starfleet. And of course, as always happens, some of the Lobi Crystal Consortium were able to get their hands on those designs as well…

Captains opening the A Safe Galaxy Lock Box may find themselves fortunate enough to win the World Razer Temporal Op Juggernaught. This alternate, dark version of the USS Enterprise-D appeared in a painting in Picard’s Chateau, the first sign that he was in a universe where something was very, very wrong. This powerful Juggernaut offers several ways to give huge amounts of phaser damage to your enemies, ensuring nothing in your direct sight survives.

The bloodlust of the Confederation can work in your favor. When you have this trait slotted, you get a bonus to your weapon subsystem power every time you defeat an enemy. This effect will stack up to three times, and additional enemies defeated will grant a brief overflow.

There are three new Kit Modules available in the A Safe Galaxy Lock Box, which can be used by any profession.

Explosive Drone creates a semi-autonomous drone which identifies and hunts down hostile targets. The drone explodes upon reaching close proximity to the enemy target, causing kinetic damage to all nearby enemies.

Opening this pack presents you with a Obliviating Phaser beam. Obliviating Phaser space weapons have a chance to bypass your target's Shields and penetrate its Hull deeply. This replaces the standard Phaser effect. All weapons contained within these crates are of Very Rare quality, and contain the special passive mentioned previously, in addition to other random modifiers.

A Safe Galaxy Lock Box will also contain three new types of ground weapon. They are: 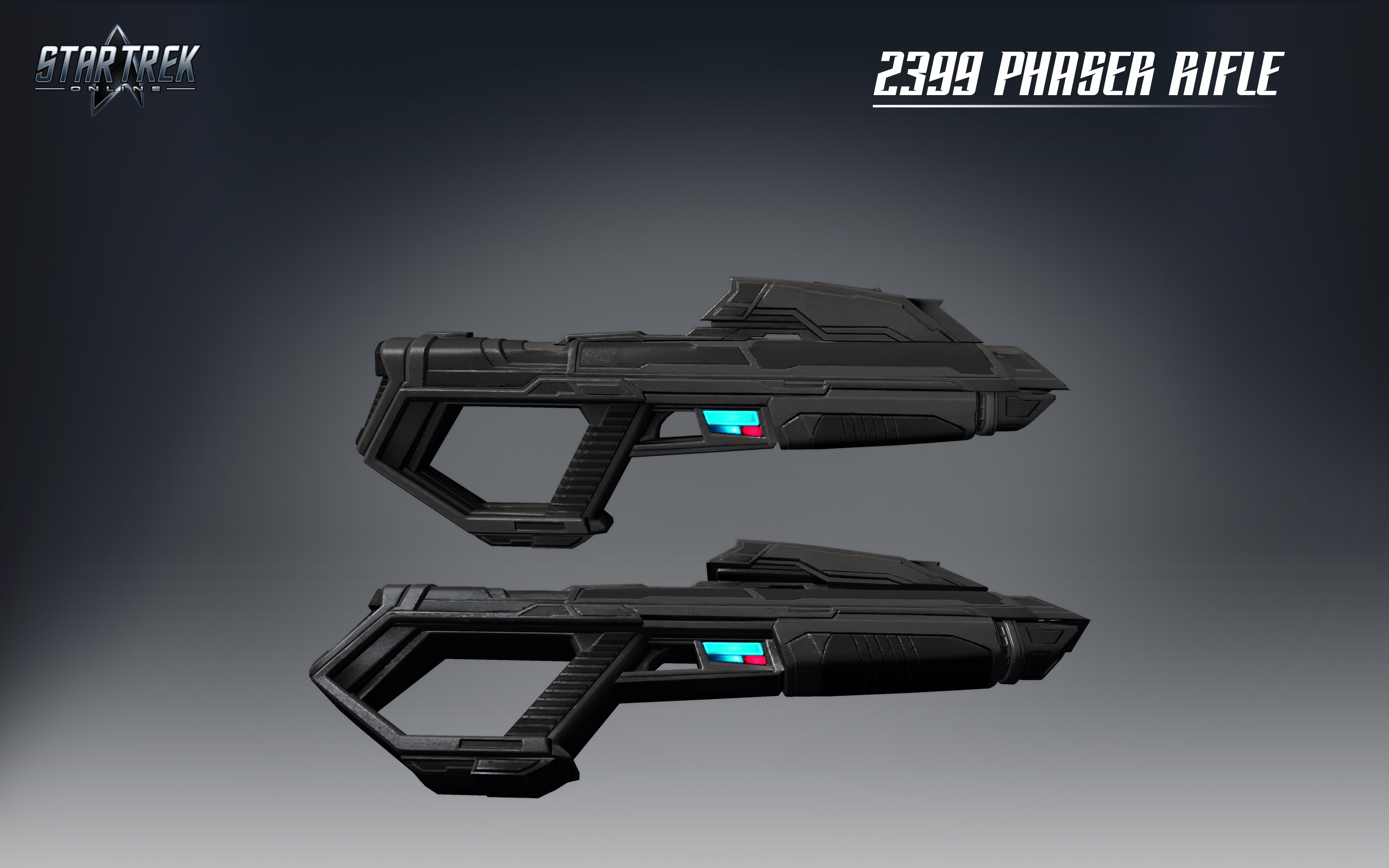 The previous generation of Federation ground weaponry has a secondary fire that shoots at up to five different targets. Instead of the traditional “spray and pray,” these secondary attacks are precise. 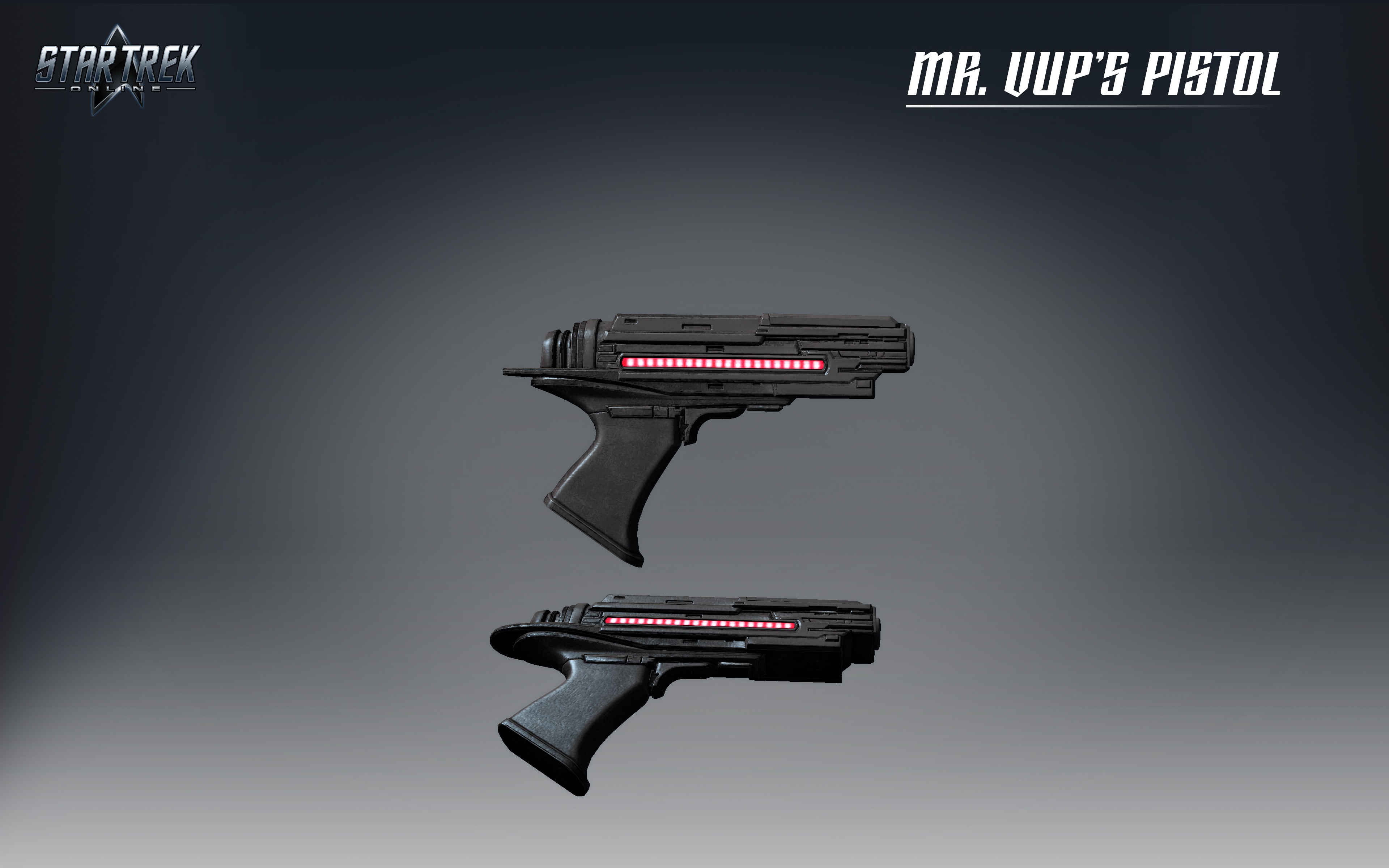 Mr Vup's pistol is a type of pistol colloquially known as a Barkeeper's Friend.  It is a wide beam phaser pistol that has been altered to deliver a strong concussive force.  Most effective in close quarters, it boast much greater knockback power the closer target is.  It’s said to have received its nickname due it being similar in function to the “sawed-off” shotguns featured in fictional Holodeck programs set in the 19th and 20th century. 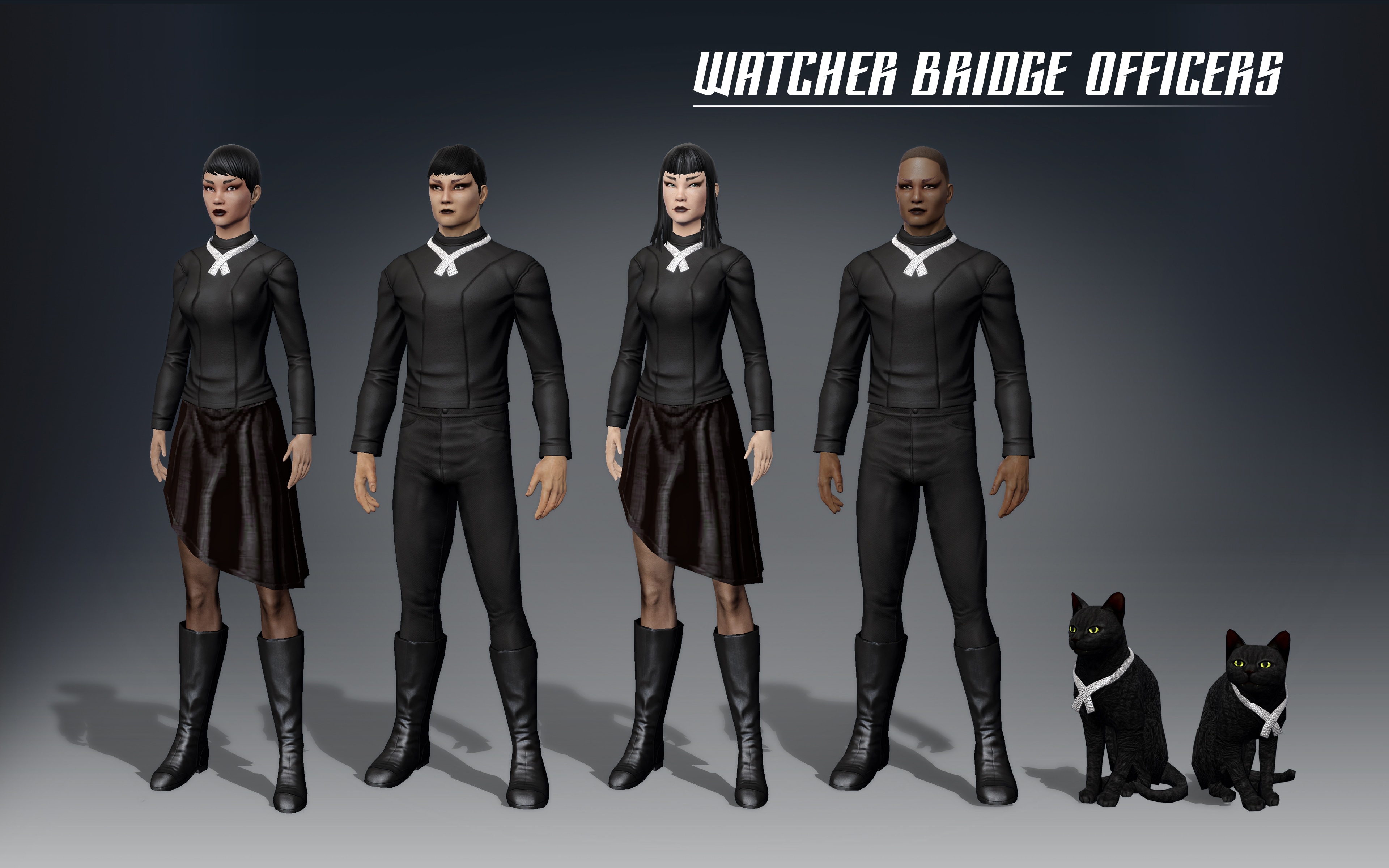 Another thing to be obtained from the A Safe Galaxy Lock Box is the Bridge Officer Pack, which will contain a Watcher Companion to add to your Bridge Officer roster. These Watchers were created by the power of the Travelers to help ensure the survival of crucial people and species throughout time and space, and now they’re here to watch over you.

In addition to any of these rewards, opening one of the A Safe Galaxy Lock Box’s options will grant you a small amount of Lobi Crystals. 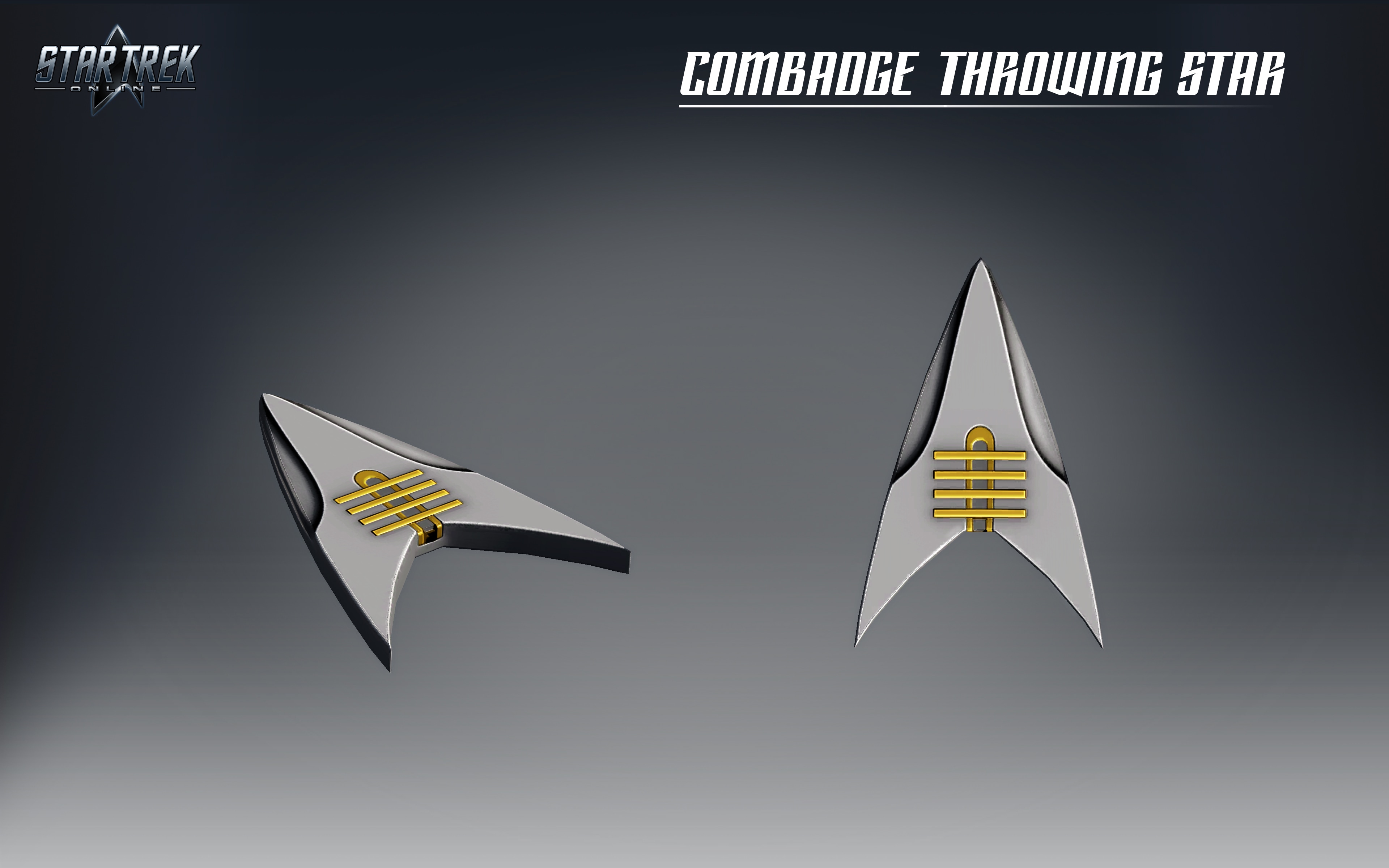 This Combadge from the Confederation also has the capability to used as a knife. Its unique design allows it to be worn as a standard Combadge, additionally, it can use used as a knife in hand to hand combat. When wielding this Sidearm in combat, it's used at a fighting knife and can be thrown at targets outside of knife range.  This Sidearm is also capable of causing the target to Bleed for 3 sec.  As a Sidearm, similar to the previously released Terran Knife, the Confederation Combadge replaces the Tertiary attack. For example, if you have Palm Strike as your Tertiary attack and you equip this Confederation Combadge Sidearm, it will replace your Palm Strike with it. This Sidearm takes up a Device slot. 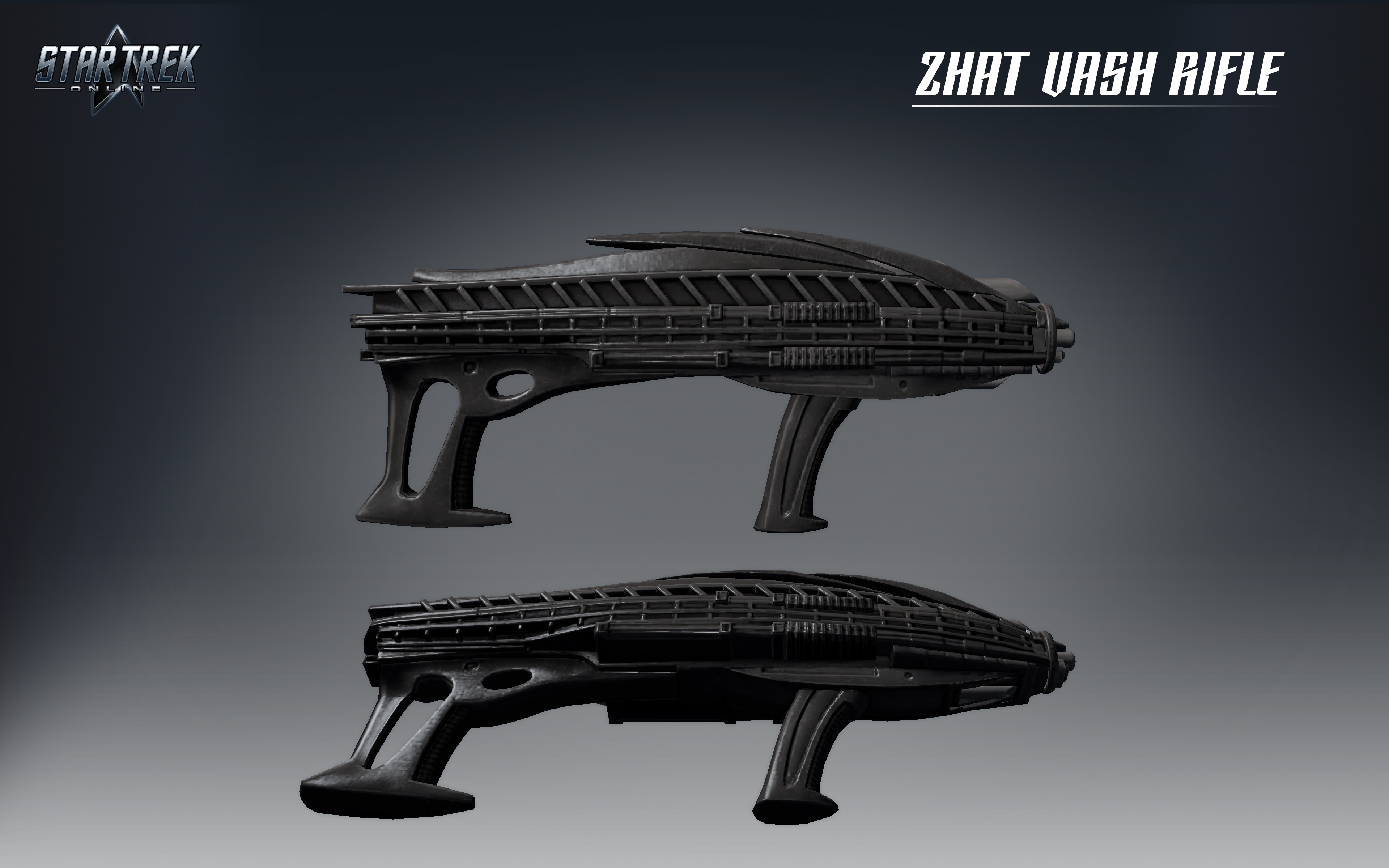 Zhat Vash operatives uses these powerful weapons during infiltration assignments, frequently while posing as Tal Shiar agents. The secondary fire is an explosive area attack similar to the pistol version.  However, unlike their pistol counterparts, they do not require time to build up the explosive charge.