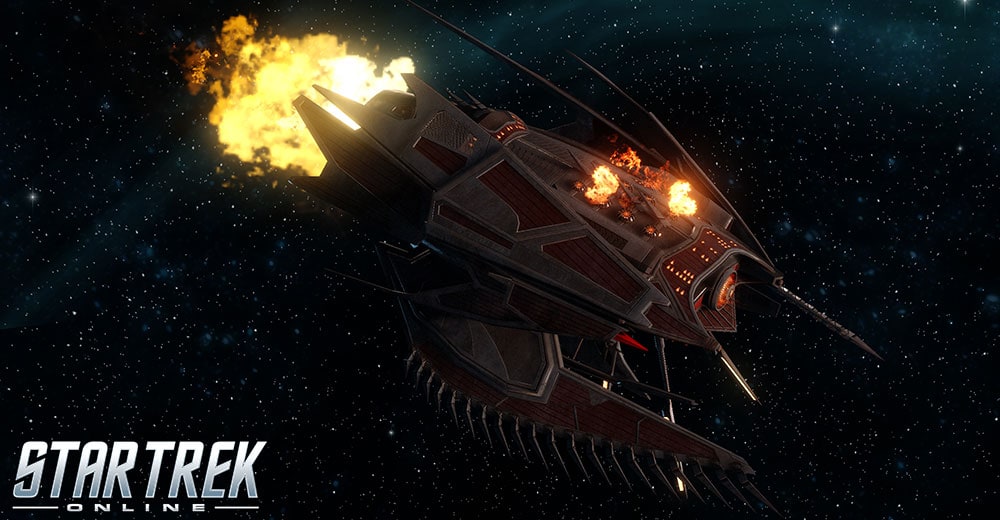 It’s the most wonderful time of the year, agree sentients whom Q has graced with wonder and terror in equal portions. That does, for some, make it the most terrible time of the year too, but that’s a small price to pay to bask in the glory that is Q. Behold, mortal! The 2022 edition of Q’s Winter Wonderland! This year’s Grand Prize for participating in the Event will be the shrieking screaming inimical Fek’Ihri Byr’Jai! Go forth, dispense joy unto yourselves and terror unto your foes. Surely your species are responsible enough that this will increase net joy and not net terror… surely.

Q’s dark designs are offering all captains the opportunity to earn their way to flying their very own Fek'Ihri Byr'Jai Interceptor [T6]. The dread claw of the Fek’Ihri torments psyche as well as physiology, and this ship places both at your command. Devastate your foes’ will to fight, confront them with the souls of the damned and delight in their disarray. This starship can be yours simply for participating in the seasonal celebration we have created for your enjoyment.

Earning the ship will require completing various activities available on the Q’s Winter Wonderland map each day, and gathering enough Daily Progress to fulfill the Winter Event’s overall quota. Players may participate in any of the available Winter activities to earn their Daily Progress once per day, per account.

Once you have earned sufficient Daily Progress, you may claim this Starship for your entire account. Just open the Event Reclaim Store to claim an Fek'Ihri Byr'Jai Interceptor [T6] for each captain on your account.

As the most prevalent ship within the strange ranks of the Fek'Ihri navy, the Byr'Jai is frequently seen at the forefront of their invasions, where ever they take place. They serve as the heralds and fighter screens for the larger vessels, and are able to open portals to their hellish dimension to usher the Lost Souls of Gre'thor into battle.

Console – Universal – Portal of the Damned

Strange technology, capable of tearing open dimensional gates that allow the fiery energies of the Fek'Ihri realms to spill into local space. These openings may also be traversed by entities resembling the Lost Souls of Gre'thor, straight from Klingon folklore.

This console also provides a passive boost to Starship Exotic Particle Generators skill, as well as Armor Penetration with Weapons vs. Foes affected by a Damage-over-Time effect.

While this trait is slotted, all of the Anomalies created by your Bridge Officer Anomaly Abilities will periodically allow Lost Souls to pass through ruptured space, allowing these vicious entities to tear into nearby enemy starships. They will randomly target nearby enemies and attack them with their spectral claws, dealing Physical Damage to any starship they choose to attack.

You may have a maximum of 12 Lost Souls active at any point in time, regardless of the number of Anomalies you have active.

A projector built to send out the unique energies of the Fek'Ihri at foes in a targeted area, causing their ships to experience a burst of intense, hull-melting heat. It is unknown for certain if the heat experienced is entirely real, or partially some form of exotic reality-bending energies.

Impact the foe with an explosive fiery charge, which can catch secondary targets in the blast zone. Each affected foe will take an immediate amount of Fire Damage, then be afflicted with additional Fire Damage-over-time. This weaponry also has a small chance of confusing affected foes.