For the upcoming Season 18 Kelvin lockbox, Lead Ship Artist Thomas Marrone and I decided to take a look at our existing Kelvin-Timeline ships to see if there was anything that needed a visual upgrade to match the quality of the newer ships that will be included in the bundle.  And while the U.S.S. Vengeance / Kelvin-Timeline Intel Dreadnought Cruiser was a fine model for its time, it’s material was showing its age so we decided it was the prime candidate for such an upgrade.

Thomas and I then took a look at Mauricio Tejerina’s original model and material to identify areas we thought could be improved.  We were thrilled that the model geometry itself was mostly up to par; we made note of only a few things we’d like to polish.   After a couple of days of work, I’d wrapped up these relatively easy changes to the geometry and was ready to move on to the material.

Thomas and I knew going in to this task that the material applied to the ship was what needed the most work.  The obvious offense was that the distinct “Aztec” pattern of the hull paneling of the Vengeance in the movie was missing entirely from Mauricio’s original material.  Aztec paneling has been a trademark of the majority of Starfleet ships since it’s debut on the newly refitted Enterprise in Star Trek: The Motion Picture, so we felt it was imperative to change the material’s existing hull paneling to reflect this unique Starfleet look.  The original material was also crafted in a time before Star Trek: Online switched to its new lighting model which greatly enhanced the way reflections and materials look in our game.  I added some variation in the hull panel’s reflection values to give it that “shimmer” effect you always see when the light hits a starship just right in the TV shows and movies.  In the end we had a material that makes the Dreadnought look much closer to the Vengeance we see in the film. 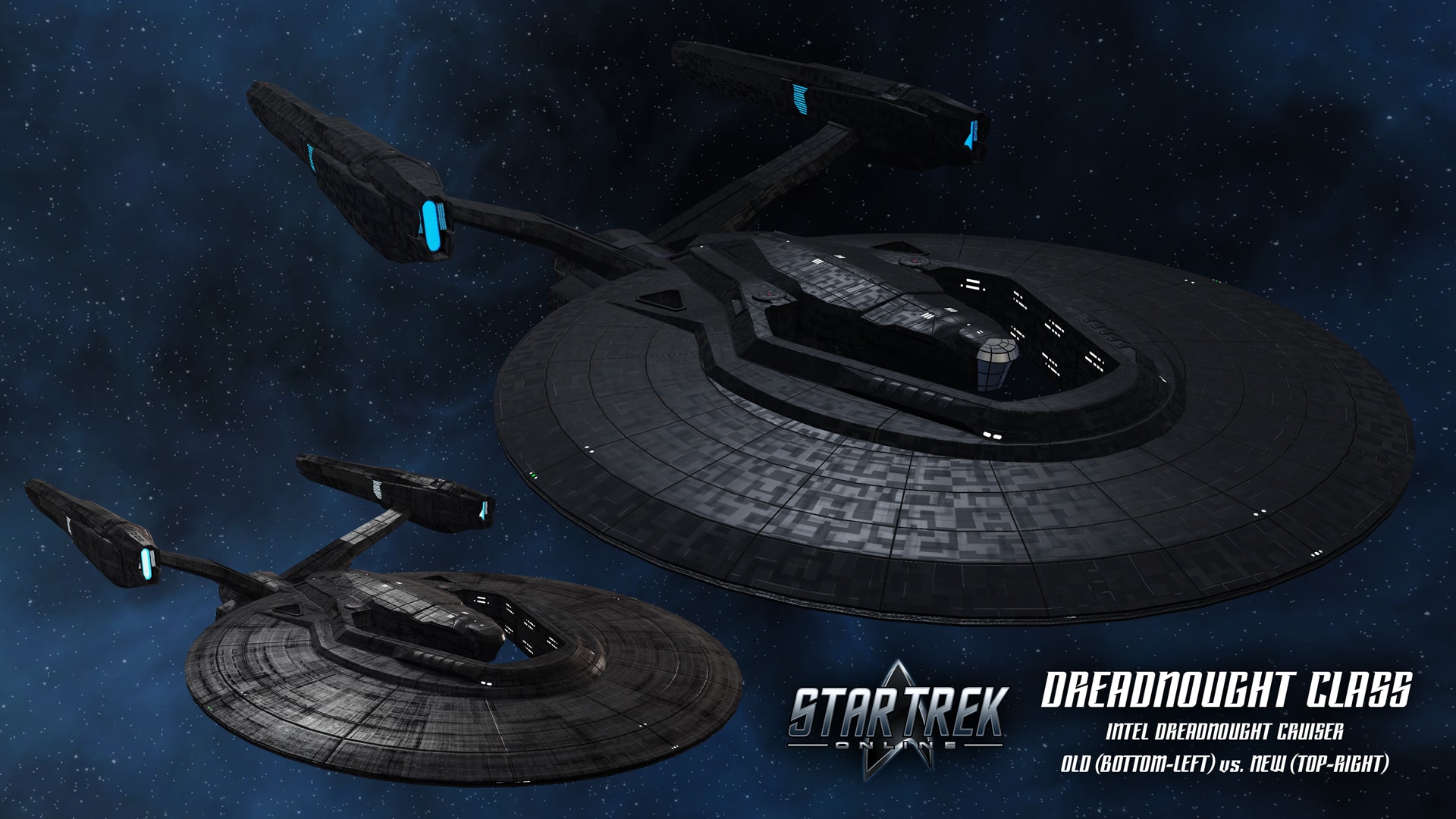 I made some additional changes to the original material, notably the color of the impulse engine glow to be less in the magenta range and more towards purple, again to be more accurate to the movie.  I also noticed that the original model was missing the distinctive spotlights on the underside of the saucer and on the nacelle pylons, so I quickly added those to the model.

While the new material looks great, we didn’t want to rob players of the old material if they preferred it over the new one, so we decided to keep the option to use it open to players.  There was also one other thing Thomas and I wanted to add to the Dreadnought as a bonus option to the fans of this ship design: decals.  While the U.S.S. Vengeance didn’t have a registry number or decals in Star Trek: Into Darkness, we thought it would be a nice touch to allow the option to have your version of the Dreadnought decked-out with either the traditional red Starfleet decals or black Section 31 decals, the latter of which looks great if you apply a white or grey hull material to the ship.  We included options for either black or white registry numbers as well. 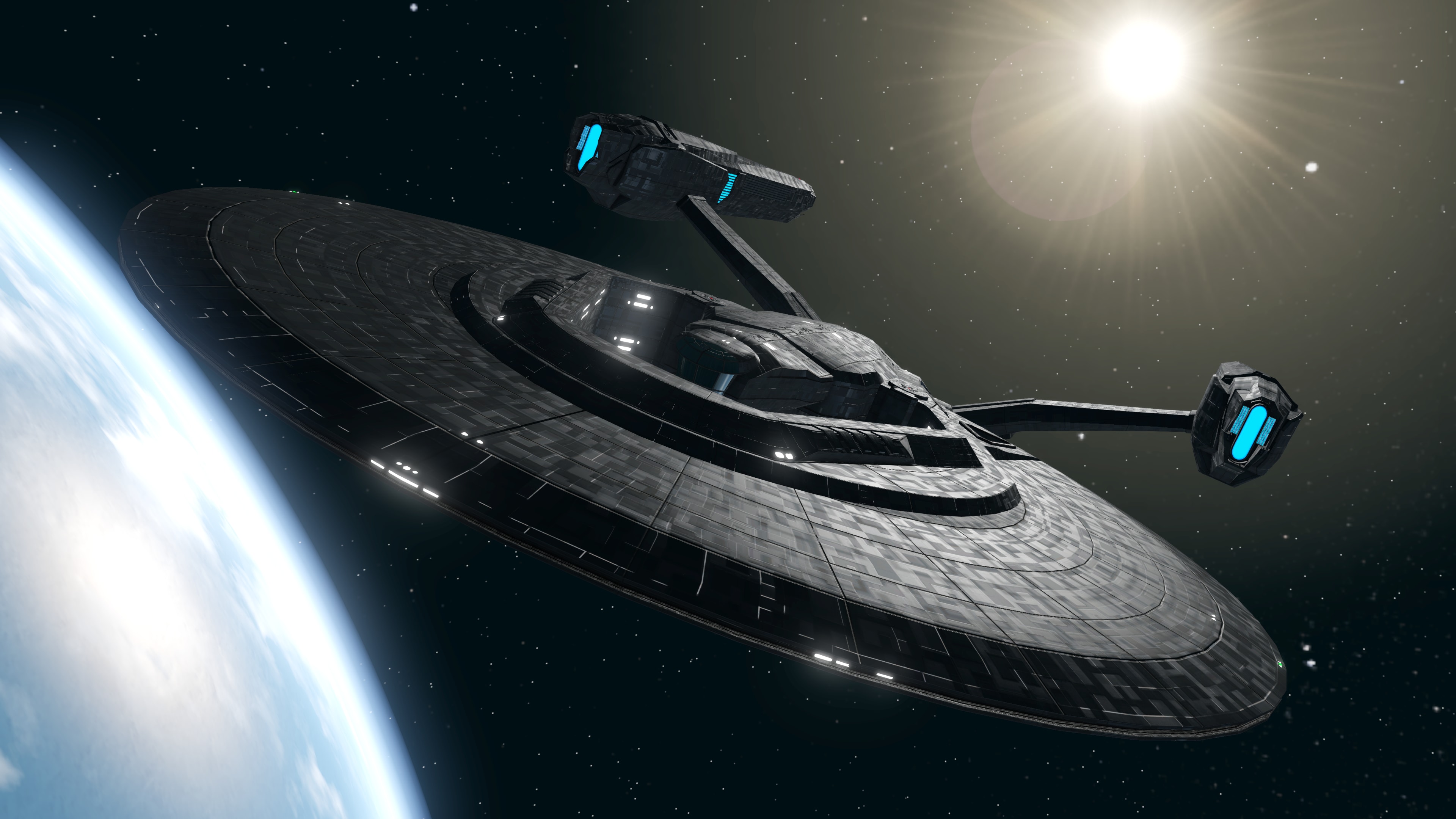 We hope you enjoy the upgrade we’ve made to the Kelvin-Timeline Intel Dreadnought Cruiser.  If you already own one and wish to see these updates on your ship, simply set it as your active starship, go to the Starship Customization screen and select the "Dreadnought" option from the list on the left.  Thanks for playing, and live long and prosper!