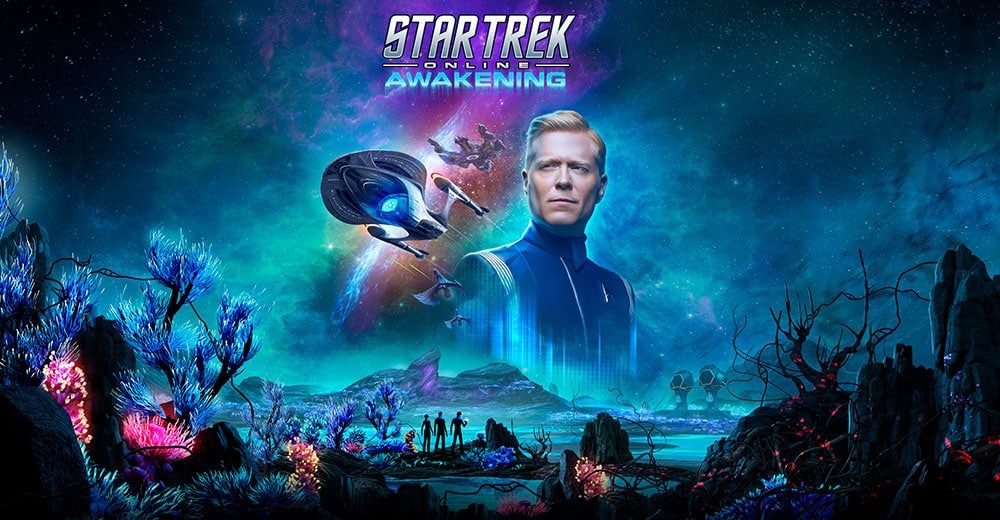 It’s time to return to 2410, Captains. Our multi-part, expansion-over-time that began with Age of Discovery and ended with Rise of Discovery is now complete, and with it we’ve brought a ton of excitement to Star Trek Online. A entirely new faction, a revamped tutorial experience, and six new episodes starring beloved actors Mary Wiseman, Jason Isaacs, and Rehka Sharma brought the story of Star Trek: Discovery to Star Trek Online. We gave experienced players more to do with updates like Random Task Force Operations, Tier 6 Reputations, and Personal Endeavors. And we unleashed the Featured Task Force Operation system, bringing new stories and experiences to our game more often.

Now, we’re moving back to our main setting, the year 2410. And we’re bringing Anthony Rapp with us.

Rapp, known to Star Trek fans as Paul Stamets on Star Trek: Discovery, is the star of our next content update, Star Trek Online: Awakening. During Age of Discovery, players witnessed J’Ula and her Klingon forces steal Mycelial technology, which pulled them forward to the year 2410. Captains must now follow this ruthless Klingon matriarch back to the 25th century to ensure she doesn’t corrupt the entire Mycelial Network in pursuit of her own dangerous agenda. Unfortunately, the insurmountable threat J’Ula poses to the universe also draws out the Elachi, who fear her actions will lead to the destruction of their home planet - and they will stop at nothing to protect it. In order to complete their mission, Captains must rely on the help of an astromycologist expert, a sentient hologram of the legendary Lieutenant Commander Paul Stamets from the U.S.S. Discovery to help them track down J’Ula and repair the tears she’s caused in the fabric of space.

Awakening will also shine a new light on Patrols, with a system that makes them easier to find and easier to play – and offers new rewards. We’re celebrating this by launching five brand new Patrols with Awakening, that see you jetting around the galaxy with Stamets and STO favorites like Captain Kuumaarke, stopping Ju’la’s plans. In addition, there will be a Mycelial Event coming which allows you to earn a new T6 Elachi ship by completing the new episode, patrols and TFO. Additional details will be released in the days leading up to Awakening’s launch on September 10th.

We’ll have more information for you this weekend at Star Trek Las Vegas, and even more details as we get closer to Awakening’s release. See you soon, Captains!