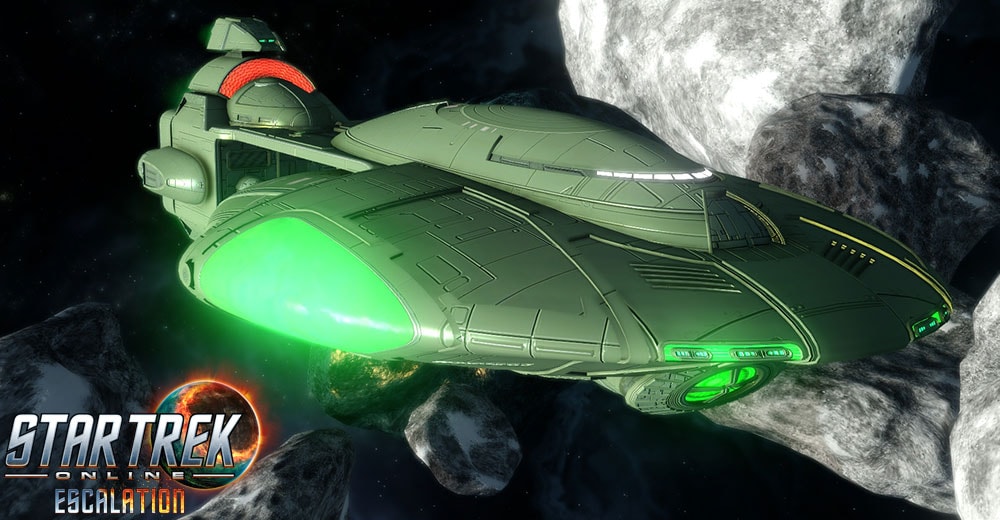 A brand new bundle of exciting “allied” starships will soon be arriving in Star Trek Online, allowing Captains of any faction access to classic designs that have been revitalized for the modern age of space travel.

Starfleet shipyards have begun producing a resurrected design from a founding species of the Federation – the Tellarite Pralim Flight-Deck Assault Cruiser [T6].

This Flight Deck Cruiser has also been produced for discerning Captains in an alternate color scheme, making it look surprisingly similar to an Arkonian military vessel.

Meanwhile, shipyards across the Klingon Empire are embracing the designs of their Orion allies, and are producing the Orion Blackguard Flight-Deck Assault Cruiser [T6].

Not to be outdone, the Romulan Republic has moved in the direction of making their tenuous partnership with the Suliban more official, by cooperating on the design and creation of the Suliban Silik Flight-Deck Assault Cruiser [T6].

These starships will be available in the C-Store and can be purchased by level 50 players (Vice Admiral and Lieutenant General ranks). Each of these Flight-Deck Assault Cruisers will have a Fleet variant made available upon release. All three faction variants share the same Universal Console and Starship Trait.

This specialized suite of I.F.F. scramblers may be used to temporarily force your enemies to fight amongst themselves for a short period of time. The primary target of the ability will be assigned as a primary opposing threat to all of their nearby allies, while targeting sensors become incapable of separating friend from foe. In addition to this, the primary target's damage resistance will also be reduced by an amount inversely proportionate to the number of foes confused (debuff is stronger if fewer foes are confused).

After achieving level 5 in your Flight-Deck Assault Cruiser, you will unlock the Majority/Minority Starship Trait. While this Trait is active, the number of Allies and Foes within 10km of you will be counted. Depending upon whether you are in the Minority (Foes outnumber Allies) or the Majority (Allies equal or outnumber Foes), you gain different combat benefits.

*Both “Allies” and “Foes” count all Hangar Pets, Fleet Support, and other similar summons. Not Mines/Torpedoes.

These starships will be available in the C-Store individually, or they found packaged together in the T6 Allied Flight-Deck Assault Cruiser bundle. Fleet versions of each of them can be unlocked by reaching Tier IV in your Starbase Shipyard.

Exact features, stats, and details on this set of nostalgia-infused Allied starships will appear within the next few days!